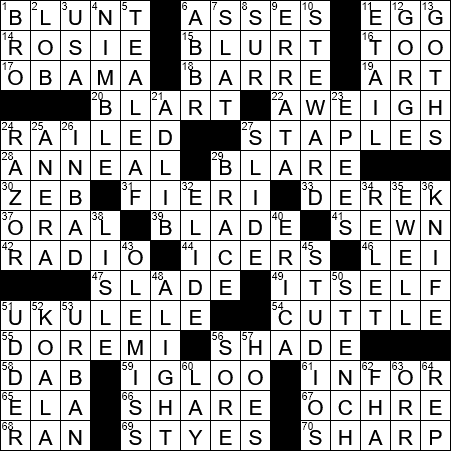 Theme: Not Pointed to Pointed

Today’s themed answers give us a word ladder, from BLUNT to SHARP, passing right through the word BLADE in the center of the grid. And we have a couple of other answers referencing that BLADE:

The word “coddle” means to boil gently, as in “coddle an egg”. Coddle was first used to mean “treat tenderly” by Jane Austen. Austen introduced the extended usage in her masterpiece “Emma”.

When an anchor is “aweigh” or “atrip”, it is just clear of the ocean bottom, has just been lifted.

Actor Will Geer died in 1978, just after filming the sixth season of “The Waltons” in which he played Grandpa Zeb Walton. Geer was a noted social activist and was blacklisted in the fifties for refusing to appear before the all-powerful House Committee on Un-American Activities.

Cuttlefish are marine animals that are related to squids and octopodes. Cuttlefish have a unique internal shell and are molluscs, not fish.

“Tasseography” is the name given to reading fortunes by interpreting the patterns of tea leaves, coffee grounds and wine sediments that are left in the bottom of a cup or glass.

Big Sur is a lovely part of the California Coast, south of Monterey and Carmel. The name “Big Sur” comes from the original Spanish description of the area as “el sur grande” meaning “the big south”.

Cyber Monday is the Monday after Thanksgiving, when retailers offer incentives to online shoppers in the hope of boosting sales. The term “Cyber Monday” was coined in 2005 in a press release issued by the website Shop.org. In recent years, consumers have been spending more money online on Cyber Monday than any other day in the year.

“Ad libitum” is a Latin phrase meaning “at one’s pleasure”. In common usage the phrase is usually shortened to “ad lib”. On the stage the concept of an ad lib is very familiar.

1. *Not pointed … and the start of an eight-step word ladder : BLUNT

17. He said “What Washington needs is adult supervision” : OBAMA

29. Aid after a neck or ankle injury : BRACE