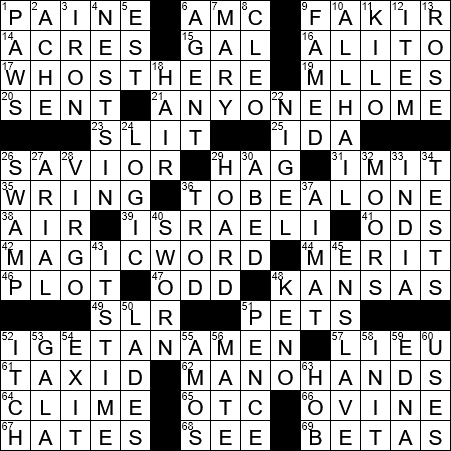 CROSSWORD CONSTRUCTOR: Brian Cox
THEME: Knock Knock! Who’s There? …
Each of today’s themed clue and answer combine to make the penultimate and ultimate lines of a “knock knock” joke, with each clue being a person’s name:

Today’s Wiki-est, Amazonian Googlies
Across
1. “Common Sense” pamphleteer : PAINE
Thomas Paine was an English author who achieved incredible success with his pamphlet “Common Sense” published in 1776 which advocated independence of colonial America from Britain. Paine had immigrated to the American colonies just two years before his pamphlet was published, and so was just in time to make a major contribution to the American Revolution.

6. Rambler maker of old, for short : AMC
When Nash-Kelvinator Corporation and Hudson Motor Car Company came together in 1954, it was the largest US corporate merger to date. The new company was called American Motors Corporation (AMC), and was of a size that could compete with the “Big Three” automakers. A few months after the merger, George W. Romney was given the top job at AMC. George was father of presidential candidate Mitt Romney.

The Nash Rambler is credited with establishing a new segment in the North American auto market. It is often cited as the first successful American compact car.

9. Hindu on a bed of nails : FAKIR
A fakir (also “faqir”) is an ascetic in the Muslim tradition. The term “fakir” is derived from “faqr”, an Arabic word for “poverty”.

14. Yellowstone has more than two million of them : ACRES
Yellowstone was the first National Park to be established in the world, when it was designated as such by President Grant in 1872. What a great tradition it started! The American National Parks truly are a treasure.

16. 2006 Supreme Court appointee : ALITO
Associate Justice Samuel Alito was nominated to the US Supreme Court by President George W. Bush. Alito is the second Italian-American to serve on the Supreme Court (Antonin Scalia was the first). Alito studied law at Yale and while in his final year he left the country for the first time in his life, heading to Italy to work on his thesis about the Italian legal system.

Knock, knock!
Who’s there?
Irish
Irish who?
Irish you in the name of the law!

25. Ore-___ (frozen food brand) : IDA
Ore-Ida frozen foods are all made using potatoes. The company is located in Oregon, just across the border from Idaho. “Ore-Ida” is a melding of the two state names.

39. Natalie Portman or Gene Simmons, by birth : ISRAELI
The actress Natalie Portman was born in Jerusalem, Israel. She moved to the US with her family when she was just three years old.

“Gene Simmons” is the stage name of musician Chaim Witz, who was born in Haifa, Israel. Simon’s adopts the stage persona “The Demon” when performing with Kiss the rock band that he formed in 1973 with Paul Stanley.

41. Some E.R. cases : ODS
Someone taking an overdose (OD) often ends up in an emergency room (ER).

47. Like all prime numbers but one : ODD
The only prime number that isn’t odd is the number 2.

48. Where Dorothy and Toto are from : KANSAS
Toto is Dorothy’s dog in the film “The Wizard of Oz”, and in the original book “The Wonderful Wizard of Oz” by L. Frank Baum. Toto was played in the movie by a dog called Terry, but Terry’s name was soon changed to Toto in real life due to the success of the film.

49. Camera type, in brief : SLR
SLR stands for “single lens reflex”. Usually cameras with changeable lenses are the SLR type. The main feature of an SLR is that a mirror reflects the image seen through the lens out through the viewfinder, so that the photographer sees exactly what the lens sees. The mirror moves out of the way as the picture is taken, and the image that comes through the lens falls onto unexposed film, or nowadays onto a digital sensor.

61. S.S.N., e.g. : TAX ID
The main purpose of a Social Security Number (SSN) is to track individuals for the purposes of taxation, although given its ubiquitous use, it is looking more and more like an identity number to me. The social security number system was introduced in 1936. Prior to 1986, an SSN was required only for persons with substantial income so many children under 14 had no number assigned. For some years the IRS had a concern that a lot of people were claiming children on their tax returns who did not actually exist. So, from 1986 onward, it is a requirement to get an SSN for any dependents over the age of 5. Sure enough, in 1987 seven million dependents “disappeared”.

64. General local weather pattern : CLIME
“Clime” is just another word for climate, as in the expression “in search of warmer climes”.

65. Like some stock trades, for short : OTC
Over-the-counter (OTC) trading of stocks is a way of trading directly between two parties, as opposed to exchange trading in which trading occurs in an exchange.

66. Like a merino : OVINE
The Latin word for “sheep” is “ovis”, giving us the adjective “ovine”, meaning “like a sheep”.

69. Often-buggy software versions : BETAS
In the world of software development, the first tested issue of a new program is usually called the “alpha” version. Expected to have a lot of bugs that need to be fixed, the alpha release is usually distributed to a small number of testers. After reported bugs have been eliminated, the refined version is called a “beta” and is released to a wider audience, but with the program clearly labeled as “beta”. The users generally check functionality and report further bugs that are encountered. The beta version feeds into a release candidate, the version that is tested just prior to the software being sold into the market, hopefully bug-free.

Down
2. Need ibuprofen, say : ACHE
“Ibuprofen” is a shortened version of the drug’s name: Iso-BUtyl-PROpanoic-PHENolic acid. Ibuprofen is primarily an anti-inflammatory, but apparently it is good for headaches too.

7. Musical partner of Peter and Paul : MARY
Peter, Paul and Mary were a folk-singing trio who got together in 1961. The group’s members were Peter Yarrow, Paul Stookey and Mary Travers. Peter, Paul and Mary’s big hit was 1963’s “Puff, the Magic Dragon”.

8. Queen of the Nile, briefly : CLEO
Cleopatra was the last pharaoh to rule Egypt. After she died, Egypt became a province in the Roman Empire.

12. Subject for gossips : ITEM
An unmarried couple known to be involved with each other might appear in the gossip columns. This appearance as “an item” in the papers, led to the use of “item” to refer to such a couple, but only since the very early seventies.

13. Jack’s love in “Titanic” : ROSE
When James Cameron made his epic movie “Titanic”, released in 1997, it was the most expensive film ever made, costing about $200 million. It was a good investment for the studio as it became the highest-grossing film of all time, bringing in over $1.8 billion. “Titanic” remained the highest-grossing film until 2010, when Cameron eclipsed the prior record with “Avatar”.

22. British pol Farage : NIGEL
British politician Nigel Farage used to be the leader of UKIP, the UK Independence Party. Farage is a noted “Eurosceptic” and was a leading voice in the movement that led to the UK’s decision to leave the European Union. I note that Farage seems to have some credibility here in the US, but quite frankly he is the subject of considerable ridicule in the UK. He is a Member of the European Parliament, but has never managed to win a UK parliamentary election.

24. KenKen solver’s need : LOGIC
KenKen is an arithmetic and logic puzzle invented quite recently, in 2004 by a Japanese math teacher named Tetsuya Miyamoto. “Ken” is the Japanese word for “cleverness”.

26. Washington establishment, so to speak : SWAMP
Drain the swamp … we’re all drowning!

28. Many a September birth : VIRGO
The astrological sign of Virgo is associated with the constellation of the same name. The Virgo constellation is related to maidens (virgins), purity and fertility.

32. Eighth-century conquerors of Iberia : MOORS
The Ebro is the longest river in Spain. The river was known by the Romans as the Iber, and it is the “Iber” river that gives the “Iberian” Peninsula its name.

33. Second-most-populous nation : INDIA
The vast Asian country called India takes its name from the Indus River. The name “Indus” in turn comes from the Sanskrit “Sindhu” that can be translated as “a body of trembling water”. India is the second-most populous country in the world (after China), and the most populous democracy.

48. Vegas numbers game : KENO
The name “Keno” has French or Latin roots, with the French “quine” being a term for five winning numbers, and the Latin “quini” meaning “five each”. The game originated in China and was introduced into the West by Chinese immigrants who were working on the first Transcontinental Railroad in the 1800s.

50. Fills with cargo : LADES
The verb “lade” meaning “to load” comes from an Old English word “hladan”. Lade also used to mean “to draw water” and indeed gave us our word “ladle”. So “lade” and “ladle” are close cousins.

51. Biden’s successor as V.P. : PENCE
Mike Pence served as the 50th Governor of Indiana from 2013 until 2017, when he became the 48th Vice President of the US in the Trump administration. Famously, Vice President Pence has described himself as “a Christian, a conservative, and a Republican, in that order”, although he grew up in an Irish Catholic Democrat family.

55. “Chicago” simpleton ___ Hart : AMOS
The wonderful 1975 musical “Chicago” is based on a 1926 play of the same name written by a news reporter called Maurine Dallas Watkins. Watkins had been assigned to cover the murder trials of Beulah Annan and Belva Gaertner for the “Chicago Tribune”, and used the story that unfolded as the basis for her play. Annan became the character Roxie Hart, and Gaertner became Velma Kelly. I’ve only ever seen the movie version of “Chicago” and never a live performance …

59. Pulitzer winner Ferber : EDNA
Edna Ferber was a novelist and playwright from Kalamazoo, Michigan. Ferber won a Pulitzer for her novel “So Big”, which was made into a film a few times, most famously in 1953 starring Jane Wyman. Ferber also wrote “Show Boat”, “Cimarron” and “Giant”, which were adapted successful for the stage and/or big screen.

60. Plays for a sap : USES
“Sap” is slang for a fool, someone easily scammed. The term arose in the early 1800s in Britain when it was used in “saphead” and “sapskull”. All these words derive from “sapwood”, which is the soft wood found in tree trunks between the bark and the heartwood at the center.