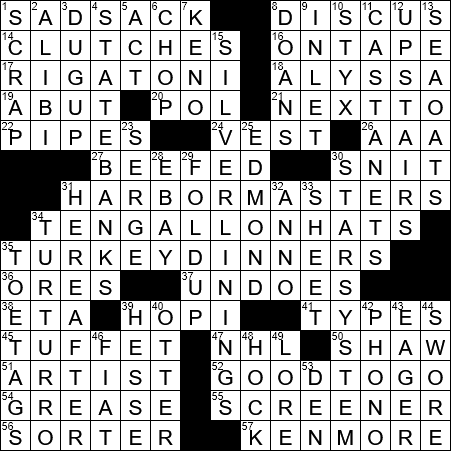 Today’s Wiki-est, Amazonian Googlies
Across
1. Perennial loser : SAD SACK
The slang phrase “sad sack” is used for a person who bungles things, someone who is pathetically inept. The phrase was coined in the twenties but gained popularity during WWII when it was used by a cartoon character in the US Armed Forces magazine “Yank”. The term is probably a shortened form of the much ruder phrase “sad sack of ****”.

17. Pasta with ribs : RIGATONI
Rigatoni is a tubular pasta that is relatively short, and with ridges along its length.

18. “Charmed” actress Milano : ALYSSA
Alyssa Milano is an actress who started her career at a very young age. Milano played Samantha Micelli on “Who’s the Boss”, the daughter of the character played by Tony Danza.

26. S.&P. rating : AAA
Standard & Poor’s (S&P) is a financial services company, famous for its stock market indices, especially the S&P 500. The company also publishes credit ratings for sovereign governments, and in 2011 famously lowered the rating of the US federal government from AAA to to AA+.

27. Made objections : BEEFED
A beef is a complaint or a grievance. It’s not quite clear how “beef” came to have this meaning, but one suggestion is that derives from the habit of soldiers at the end of the 1800s complaining about the quality or availability of beef in their rations.

30. Pet : SNIT
The exact etymology of “snit”, meaning “fit of temper”, isn’t really known. The term was first used in print in the play “Kiss the Boys Goodbye” by Clare Booth Luce, which dates back to the 1930s and is set in the American South.

34. High tops? : TEN-GALLON HATS
The term “ten-gallon hat” describing a cowboy hat only appeared in 1925, and nobody seems to be exactly sure of the term’s origin. Some suggest that the relatively waterproof nature of the hat due to the tight weave might explain it, with images of cowboys giving drinks of water from their upturned hats. However, there’s no way any cowboy hat will hold ten gallons, more like three quarts.

38. Greek vowel : ETA
Eta is the seventh letter of the Greek alphabet, and is a forerunner of our Latin character “H”. Originally denoting a consonant, eta was used as a long vowel in Ancient Greek.

45. Short-legged item of furniture : TUFFET
“Little Miss Muffet sat on a tuffet eating her curds and whey”, in the popular nursery rhyme. A tuffet is a low seat or a footstool, another word for a pouffe or a hassock. When milk curdles it separates into two parts, the solid curds and the liquid whey. Then “along came a spider and sat down beside her”.

47. Montreal is part of it: Abbr. : NHL
The National Hockey League (NHL) was formed in 1917 in Montreal, a successor to the defunct National Hockey Association (NHA) that had been founded in 1909. Today, the NHL comprises 30 teams: 23 in the US and 7 in Canada.

The Montreal Canadiens hockey team is known by the nickname “Habs”, which is short for “Les Habitants”. “Les habitants” were the original French settlers in Quebec.

51. Grammys competitor : ARTIST
The first Grammy Awards Ceremony was held in 1959 and focused on recognizing outstanding achievement in the recording industry. The idea of a Grammy Award came up when recording executives were working on the Hollywood Walk of Fame project in the fifties. These executives concluded that there were many people in the recording industry deserving of accolades but who would probably never make it to the Walk of Fame. As a result, they founded the National Academy of Recording Arts and Sciences. The Academy considered naming the award the “Eddies” after Thomas Edison, but then opted for “Grammy” after Edison’s invention: the gramophone.

54. Musical with the song “Beauty School Dropout” : GREASE
The first Grammy Awards Ceremony was held in 1959 and focused on recognizing outstanding achievement in the recording industry. The idea of a Grammy Award came up when recording executives were working on the Hollywood Walk of Fame project in the fifties. These executives concluded that there were many people in the recording industry deserving of accolades but who would probably never make it to the Walk of Fame. As a result, they founded the National Academy of Recording Arts and Sciences. The Academy considered naming the award the “Eddies” after Thomas Edison, but then opted for “Grammy” after Edison’s invention: the gramophone.

Down
2. Whodunit story? : ALIBI
“Alibi” is the Latin word for “elsewhere” as in, “I claim that I was ‘elsewhere’ when the crime was committed … I have an ‘alibi’”.

6. Martial arts film hit : CHOP
Martial arts are various fighting traditions and systems used in combat or simply to promote physical well-being. The term ultimately derives from Latin and means “Arts of Mars”, a reference to Mars, the Roman god of war.

7. Number-picking game : KENO
The name “Keno” has French or Latin roots, with the French “quine” being a term for five winning numbers, and the Latin “quini” meaning “five each”. The game originated in China and was introduced into the West by Chinese immigrants who were working on the first Transcontinental Railroad in the 1800s.

8. Popular backache remedy : DOAN’S
Doan’s is a pain reliever and anti-inflammatory drug. The active ingredient is magnesium salicylate, and it can be purchased without a prescription.

9. Blue arm : INLET
That would be an inlet of a blue sea or ocean.

11. Pair in “Carmen” : CASTANETS
Castanets are hand-held percussion instruments associated most notably with Spanish music. We tend to think of castanets being used in the flamenco style of dance, but in fact this is rarely the case. The name “castanets” comes from “castaña”, the Spanish word for “chestnut”, which they resemble.

Georg Bizet was a French composer active in the Romantic era. Bizet’s most famous work has to be his opera “Carmen”. “Carmen” initially received a lukewarm reception from the public, even though his fellow composers had nothing but praise for it. Sadly, Bizet died very young at only 36, before he could see “Carmen’s” tremendous success.

15. Optimists’ discoveries : SILVER LININGS
The idiom “every cloud has a silver lining” suggests that there is something good to be found in in every bad situation. The phrase “silver lining” was coined by English poet John Milton in “Comus”, a piece of dramatic entertainment that was first performed in 1634. The relevant lines are:

28. Onetime owner of Skype : EBAY
The main feature of the Skype application is that it allows voice communication to take place over the Internet (aka VoIP). Skype has other features such as video conferencing and instant messaging, but the application made its name from voice communication. Skype was founded by two Scandinavian entrepreneurs and the software necessary was developed by a team of engineers in Estonia. The development project was originally called “Sky peer-to-peer” so the first commercial name for the application was “Skyper”. This had to be shortened to “Skype” because the skyper.com domain name was already in use.

39. “Siddhartha” novelist : HESSE
The 1922 novel “Siddhartha” by Hermann Hesse focuses on the spiritual journey of a man called Siddhartha. Even though the Buddha’s name was Siddhartha Gautama before he renounced his former life, Hesse’s Siddhartha is a different character who lived around the time of the Buddha.

46. Turin-based automaker : FIAT
Fiat is the largest car manufacturer in Italy, and is headquartered in Turin in the Piedmont region in the north of the country. Fiat was founded in 1899 by Giovanni Agnelli, when the company’s name was “Fabbrica Italiana di Automobili Torino” (FIAT). A few years ago, Fiat became the majority shareholder in Chrysler.

48. Pawn : HOCK
The phrase “in hock” is an American invention. Back in the mid-19th century “in hock” meant both “in debt” and “in prison”. The word “hock” comes from the Dutch “hok” meaning “jail”.