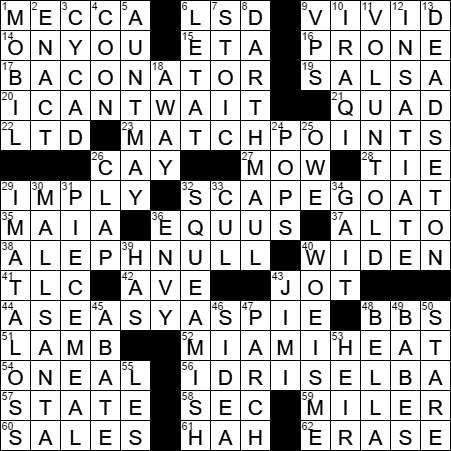 Today’s Wiki-est, Amazonian Googlies
Across
1. Churchill Downs, to horse racing fans : MECCA
We’ve been using “mecca” to mean “a place one holds sacred” since the 1850s, and have since extended the usage to include any center of activity. The term derives from the sacred city of Islam, the birthplace of Muhammad.

22. Abbr. for Lucasfilm : LTD
Lucasfilm Ltd. is a San Francisco production company founded in 1971 by George Lucas. The enterprise’s most famous movies are the “Star Wars” and “Indiana Jones” franchises. The Walt Disney Company purchased Lucasfilm for over $4 billion in 2012.

26. Sandy islet : CAY
A “key” (also “cay”) is a low island offshore, as in the Florida Keys. Our term in English comes from the Spanish “cayo” meaning “shoal, reef”.

32. Shakespeare’s Shylock, for one : SCAPEGOAT
A scapegoat is a person chosen to take the blame in place of others. The term comes from the Bible’s Book of Leviticus, which describes a goat that was cast into the desert along with the sins of the community.

Shylock is a character in William Shakespeare’s “The Merchant of Venice”. Shylock is a moneylender and he gives a loan which is to be secured by “a pound of flesh”. When the money cannot be repaid, Shylock demands his pound of flesh, the collection of which would kill the poor victim of his scheme.

The Seven Sisters of Greek mythology are also known as the Pleiades. The Seven Sisters were the daughters of the titan Atlas, who had been forced to carry the heavens on his shoulders. In an act of kindness, Zeus transformed the sisters first into doves, and then into stars so that they could provide comfort for their father. There is indeed a cluster of seven stars in the night sky named for the myth and known as the Pleiades.

37. Cher or Adele, e.g. : ALTO
Cher’s real name is Cherilyn Sarkisian, born in 1946. Formerly one half of husband-wife duo Sonny & Cher, she is often referred to as the Goddess of Pop. In her acting career, Cher was nominated for the Best Supporting Actress Oscar of 1984 for her performance in “Silkwood”. She went further in 1988 and won the Best Actress Oscar for playing Loretta Castorini in “Moonstruck”.

“Adele” is the stage name of English singer Adele Adkins. Adele’s debut album is “19”, named after the age she was during the album’s production. Her second album was even more successful than the first. Called “21”, the second album was released three years after the first, when Adele was three years older. More recently, her third studio album “25”, released in 2015, broke the first-week sales records in both the UK and the US.

Uber is a ridesharing service that was founded in 2009 and is based in San Francisco. The service is somewhat controversial and has been described as an illegal taxicab operation. Central to Uber’s service is the company’s mobile app, which can use the client’s GPS location to help find the nearest available ride. Uber’s main competitor is Lyft. Personally, I love the service and have only had good experiences …

43. Modicum : JOT
A modicum is a small portion, with “modicum” coming into English from Latin, via Scottish. “Modicum” is Latin for “a little”.

51. One devoted to Mary? : LAMB
“Mary Had a Little Lamb” is a nursery rhyme that originated in the US, first published in Boston in 1830. The rhyme was written by Sarah Josepha Hale, and was based on a real-life Mary who had a pet lamb that followed her around. “Mary Had a Little Lamb” has the distinction of being the first words recorded by Thomas Edison on his phonograph invention in 1977.

52. Its logo features a flaming ball : MIAMI HEAT
The Miami Heat basketball team debuted in the NBA in the 1988-89 season. The franchise name was chosen in a competitive survey, with “Miami Heat” beating out “Miami Vice”.

54. He joined the 52-Across in 2004 : O’NEAL
(52A. Its logo features a flaming ball : MIAMI HEAT)
Retired basketball player Shaquille O’Neal now appears regularly as an analyst on the NBA TV show “Inside the NBA”. Shaq has quite a career in the entertainment world. His first rap album, called “Shaq Diesel”, went platinum. He also starred in two of his own reality show: “Shaq’s Big Challenge” and “Shaq Vs.”

59. One who might target four minutes : MILER
The 4-minute barrier for the mile run was first broken in 1954 by Roger Bannister, when he finished in just over 3m 59s. The record for males now stands at 3m 43s. If you plan on running a 4-minute mile, you should probably be warned that this means you have to run the whole race at an average speed of over 15 mph (do the math!).

60. What Willy Loman was in : SALES
“Death of a Salesman” is a famous play by Arthur Miller, first produced in 1949. “Death of a Salesman” won a Pulitzer and several Tony Awards over the years. The “salesman” in the play is the famous character Willy Loman. The play originally opened up on Broadway and ran for 724 performances. The lead role was played by the veteran actor Lee J. Cobb.

Down
1. Company once named Socony-Vacuum : MOBIL
Mobil was founded as part of the the breakup of Standard Oil in 1911. The company was originally called Socony (Standard Oil Company of New York). Socony merged with Magnolia Petroleum Company in the thirties and adopted Magnolia’s Pegasus emblem, and it has been used ever since. Mobil merged with Exxon in 1999 but the Mobil brand and Pegasus are alive and well.

4. Cousin of a polecat : COON
The raccoon is native to North America. In captivity, raccoons can live to over 20 years of age, but in the wild they only live two or three years. The main causes for the shorter lifespan are hunting and road traffic.

5. Sally Field’s role in “The Amazing Spider-Man” : AUNT MAY
Actress Sally Field first came to the public’s attention in the sixties with title roles in the TV shows “Gidget” and “The Flying Nun”. She has two Best Actress Oscars: one for “Norma Rae” (1979) and one for “Places in the Heart” (1984).

7. Not the movable type : STOIC
Zeno of Citium was a Greek philosopher famous for teaching at the Stoa Poikile, the “Painted Porch”, located on the north side of the Ancient Agora of Athens. Because of the location of his classes, his philosophy became known as stoicism (from “stoa”, the word for “porch”). And yes, we get our adjective “stoic” from the same root.

10. Many a dweller along the Euphrates : IRAQI
The Euphrates is one of the two rivers that formed the main boundaries of the historical region known as Mesopotamia, the other being the Tigris.

24. Boston ___ : POPS
The marvelous Boston Pops orchestra specializes in playing light classical and popular music. The Boston Pops Orchestra grew out of the Boston Symphony Orchestra (BSO), founded in 1885 by Henry Lee Higginson. Higginson instituted a series of performances by the BSO of lighter classics for the summer months, starting in 1885. These performances were originally known as the “Promenade Concerts”, and soon became year-round events. The name evolved into “Popular Concerts”, which was shortened to “Pops” and officially adopted in 1900.

30. Worker always seen with a beard : MALL SANTA
The Santa Claus with whom we are familiar today largely comes from the description in the 1823 poem “A Visit from St. Nicholas”, and from the 1863 caricature created by the political cartoonist Thomas Nast. Nast is also responsible for locating Santa’s workshop at the North Magnetic Pole, a fact that he revealed to the world in a series of drawings in 1879.

33. ___-de-sac : CUL
Even though “cul-de-sac” can indeed mean “bottom of the bag” in French, the term cul-de-sac is of English origin (the use of “cul” in French is actually quite rude). The term was introduced in aristocratic circles at a time when it was considered very fashionable to speak French. Dead-end streets in France are usually signposted with just a symbol and no accompanying words, but if words are included they are “voie sans issue”, meaning “way without exit”.

34. Dressage concern : GAIT
The equestrian sport of dressage involves demonstration of how well as horse responds to training. “Dressage” is a French word meaning “training”.

36. “Pain at another’s good,” per Plutarch : ENVY
Plutarch was a Greek historian who became a Roman citizen. Plutarch’s most famous work is probably “Parallel Lives”, a series of paired biographies, with each pair comparing the lives of one Greek and one Roman.

43. Guitarist Hendrix : JIMI
Many of his contemporaries regarded Jimi Hendrix as the greatest electric guitarist in the history of rock music. Hendrix was from Seattle and didn’t really have a really stellar start to his working life. He failed to finish high school and fell foul of the law by getting caught in stolen cars, twice. The courts gave him the option of the army or two years in prison. Hendrix chose the former and soon found himself in the famous 101st Airborne. In the army, his less-than-disciplined ways helped him (as he would have seen it) because his superiors successfully petitioned to get him discharged after serving only one year of his two-year requirement, just to get him out of their hair.

46. Queen’s “We Are the Champions,” vis-à-vis “We Will Rock You” : SIDE A
Queen is an English rock band that was formed back in 1970. With the help of lead singer Freddie Mercury (now deceased), Queen has a long list of great hits, including “Bohemian Rhapsody”, “We Will Rock You” and “We Are the Champions”. “Bohemian Rhapsody” spent a total of nine weeks at number one in the UK.

53. Probate figure : HEIR
Probate is the process of establishing the validity of a will. The term derives from the Latin “probare” meaning “to prove”.