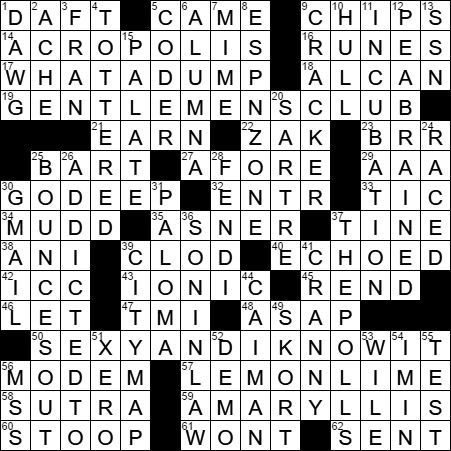 Today’s Wiki-est, Amazonian Googlies
Across
14. Literally, “highest city” : ACROPOLIS
Our prefix “acro-” comes from the Greek “akros” meaning “at the top”. Examples are “acrophobia” (fear of heights) and “Acropolis” (“city at the top”).

16. Mystical characters : RUNES
A rune is a character in an alphabet that is believed to have mysterious powers. In Norse mythology, the runic alphabet was said to have a divine origin.

18. Highway through the Yukon : ALCAN
The Alaska Highway is also known as the Alaska-Canadian Highway or ALCAN Highway. A highway connecting the contiguous United States to Alaska was proposed in the twenties, but the Canadian authorities didn’t believe the project had much merit as the road would be used by very few of its citizens. The perceived importance of the route increased during WWII and President Roosevelt deemed the road a strategic necessity so he made a deal with Canada. The cost of construction would be born by the US, but the road and related facilities were to be handed over to Canada at the end of the war. The project was accelerated when the Japanese invaded and occupied Kiska and Attu Islands in the Aleutians. The road of course has been improved and is still in use today. The ALCAN Highway forms part of what is popularly known as the Pan-American Highway, which runs from Prudhoe Bay, Alaska to the south of Argentina or Chile depending on how the route is defined.

22. Drummer Starkey : ZAK
Zak Starkey is an English drummer just like his Dad Richard Starkey, better known as Ringo Starr. Zak has performed with the Who and with Oasis.

25. TV boy with spiked hair : BART
Bart Simpson is the main character in television’s “The Simpsons”. Bart’s name was chosen by the writers as it is an anagram of “brat”. Bart is voiced by actress and comedian Nancy Cartwright.

29. Org. since 1902 with 50+ million members : AAA
The American Automobile Association (AAA) is a not-for-profit organization focused on lobbying, provision of automobile servicing, and selling of automobile insurance. The AAA was founded in 1902 in Chicago and published the first of its celebrated hotel guides back in 1917.

32. Intermission starter? : ENTR-
The term “entr’acte” comes to us from French, and is the interval “between two acts” (“entre deux actes”) of a theatrical performance. The term often describes some entertainment provided during that interval.

34. California’s Harvey ___ College : MUDD
Harvey Mudd was a mining engineer, and president of Cyprus Mines Corporation. He lent his name to Harvey Mudd College, a science and engineering college in Claremont, California.

35. Santa player in “Elf” : ASNER
“Elf” is a comedy movie released for the 2003 Christmas season. “Elf” was directed by Jon Favreau and stars Will Ferrell in the title role, with James Caan supporting and Ed Asner playing Santa Claus. It’s all about one of Santa’s elves who finds out he is human and goes to meet his father in New York City.

37. Food sticker : TINE
That would be one of the tines (points) on a fork.

38. “Star Wars” nickname : ANI
Anakin “Ani” Skywalker is the principal character in the first six of the “Star Wars” movies. His progress chronologically through the series of films is:

42. Old RR watchdog : ICC
The Interstate Commerce Commission (ICC) was set up in 1887 to regulate the railroads and later the trucking industry. The ICC was abolished in 1995 and its functions were absorbed by the Surface Transportation Board.

43. Like some columns : IONIC
The Ionic was one of the three classical orders of architecture, the others being the Doric and the Corinthian. An Ionic column is relatively ornate. It usually has grooves running up and down its length and at the top there is a “scroll” design called a “volute”. The scroll motif makes Ionic columns popular for the design of academic buildings. The term “Ionic” means “pertaining to Ionia”, with Ionia being an ancient territory that is located in modern-day Turkey.

46. Court ruling : LET
That would be on a tennis court, perhaps.

50. 2012 #1 hit by LMFAO : SEXY AND I KNOW IT
LMFAO was an electronic dance music duo active who were active from 2006 until 2012. The duo’s stage names were Redfoo and SkyBlu, with the former being the uncle of the latter. Never heard of ‘em …

56. Internet hookup : MODEM
A modem is a device that is used to facilitate the transmission of a digital signal over an analog line. At one end of the line a modem is used to “modulate” an analog carrier signal to encode the the digital information, and at the other end a modem is used to “demodulate” the analog carrier signal and so reproduce the original digital information. This modulation-demodulation gives the device its name: a MOdulator-DEModulator, or “modem”.

57. Like Sprite : LEMON-LIME
Sprite is Coca-Cola’s answer to the very successful soft drink called 7 Up. Sprite was introduced in 1961, and Coca-Cola used its muscle to topple 7 Up from its dominant position in the market. Sprite has been the number-one selling lemon soda since 1978.

58. Hindu aphorisms : SUTRA
The word “sutra” is used in Hinduism for a learned text, one usually meant to be studied by students.

59. Producer of red-and-white blooms : AMARYLLIS
Plants of the genus Amaryllis are known as belladonna lilies, although they are only distant cousins of lilies. The shape of the flower of an Amaryllis plant only resembles that of a lily.

Down
3. Ollie’s friend on old TV : FRAN
“Kukla, Fran and Ollie” is an early television show that aired from 1947-1957. Kukla and Ollie (Oliver J. Dragon) were puppets and Fran was Fran Allison, usually the only human on the show.

5. Bug exterminator? : CODER
Back in 1947, the famed computer programmer Grace Hopper noticed some colleagues fixing a piece of equipment by removing a dead moth from a relay. She remarked that they were “debugging” the system, and so Hopper has been given credit for popularizing the term.

6. Mount Holyoke grad, e.g. : ALUMNA
Mount Holyoke College is a private school for women located in South Hadley, Massachusetts. It was founded as Mount Holyoke Female Seminary in 1834 as the sister school to Andover Seminary.

8. Sports-themed restaurant : ESPN ZONE
ESPN Zone is a chain of restaurants, albeit a small chain as there are only two of them. The original location was in Baltimore, Maryland but it’s closed now. There is one ESPN Zone in the entertainment complex in Downtown Los Angeles called L.A. Live, and there is another not too far away (that I’ve visited) in Downtown Disney in Anaheim.

15. Oenophile’s pride : PALATE
In Greek mythology, Oeno was the goddess of wine, giving us “oen-” as a prefix meaning “wine”. For example, oenology is the study of wine and an oenophile is a wine-lover.

20. “The Flies” playwright : SARTRE
Jean-Paul Sartre was a leading French philosopher, as well as a writer and political activist. Sartre also served with the French army during WWII and spent nine months as a prisoner of war having been captured by German troops. He was one of the few people to have been awarded a Nobel Prize and to have then refused to accept it. Sartre was named winner of the prize for Literature in 1964, for his first novel “Nausea”. Before his win, Sartre knew that his name was on the list of nominees so he wrote to the Nobel Institute and asked to be withdrawn from consideration. The letter somehow went unread, so he found himself having to refuse the award after he had been selected.

28. Prada competitor : FENDI
Fendi is an Italian fashion house, founded in 1925 by Adele Casagrande. Fendi started out as a fur and leather shop in Rome, and these days is famous for its line of handbags.

30. Communication service since 2004 : GMAIL
Gmail is a free webmail service provided by Google, and my favorite of the free email services. Gmail made a big splash when it was introduced in 2007 because it offered a whopping 1GB of storage whereas other services offered a measly 2-4MB on average.

44. Relative of an alligator : CAIMAN
Caimans are relatively small, crocodile-like reptiles that inhabit Central and South America. That said, the largest species can grow to 13 feet in length, but many are about 3 feet long.

49. Portmanteau garment : SKORT
The garment called a “skort” is a hybrid between shorts and a skirt.

51. Prefix with -graphic : XERO-
A xerox is a copy made on a xerographic machine. Xerography is a dry photocopying technique that was invented in 1938 by Chester Carlson, although he originally referred to the process as electrophotography. Joseph Wilson commercialized Carlson’s process some years later, coining the term “Xerography” using the Greek words for “dry” and “writing”. Wilson changed the name of his own photographic company to Xerox.