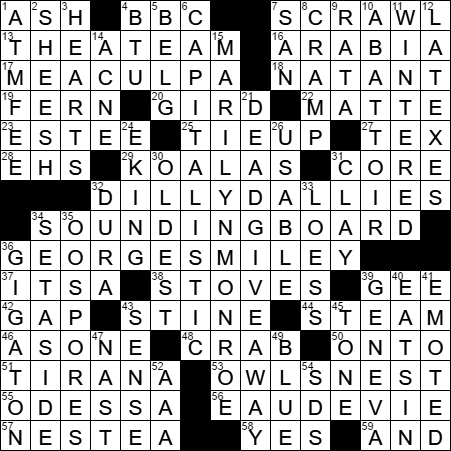 Today’s Wiki-est, Amazonian Googlies
Across
4. English channel : BBC
The marvelous British Broadcasting Corporation (BBC) is mainly funded by the UK government through a television licence fee that is levied annually on all households watching TV transmissions. Currently the fee is 145 UK pounds, about 230 US dollars.

13. Hannibal’s men : THE A-TEAM
“The A-Team” is an action television series that originally ran in the eighties. The A-Team was a group of ex-US special forces personnel who became mercenaries. Star of the show was Hollywood actor George Peppard (as “Hannibal” Smith), ably assisted by Mr. T (as “B.A.” Baracus) and Robert Vaughn (as Hunt Stockwell).

16. 1962 Best Picture setting : ARABIA
“Lawrence of Arabia” is a 1962 movie that recounts the real life story of T. E. Lawrence, a British army officer famous for his role in the Sinai and Palestine Campaign of World War I. The title role in the film is played by Irish actor Peter O’Toole. The role of Sherif Ali ibn el Kharish is played by Omar Sharif.

17. Fault line? : MEA CULPA
Many Roman Catholics are very familiar with the Latin phrase “mea culpa” meaning “my fault”, as it is used in the Latin Mass. The additional term “mea maxima culpa” translates as “my most grievous fault”.

18. Swimming : NATANT
Something described as “natant” is floating or swimming, from the Latin “natare” meaning “to swim”.

20. Bind with a belt : GIRD
The phrase “gird your loins” dates back to Ancient Rome. The expression describes the action of lifting “one’s skirts” and tying them between the legs to allow more freedom of movement before going into battle. Nowadays, “gird your loins” (or sometimes just “gird yourself”) is a metaphor for “prepare yourself for the worst”.

29. Ones carrying babies on their backs : KOALAS
The koala bear really does look like a little bear, but it’s not even closely related. The koala is an arboreal marsupial and a herbivore, native to the east and south coasts of Australia. Koalas aren’t primates, and are one of the few mammals other than primates who have fingerprints. In fact, it can be very difficult to tell human fingerprints from koala fingerprints, even under an electron microscope. Male koalas are called “bucks”, females are “does”, and young koalas are “joeys”. I’m a little jealous of the koala, as it sleeps up to 20 hours a day …

31. Middle Earth? : CORE
The Earth’s core is divided into two zones, a relatively “solid” inner core and a liquid outer core. Both inner and outer core are comprised mainly of iron and nickel. It is believed that the Earth’s magnetic field is generated by electric currents created by convection currents in the outer core.

36. Fictional spy who first appeared in “Call for the Dead” : GEORGE SMILEY
George Smiley is the protagonist in many of John Le Carré’s spy novels.

John Le Carré is the pen name of David Cornwell, an English author famous for his spy novels. Cornwell worked for British Intelligence during the fifties and sixties, even as he was writing his spy thrillers. He left MI6 soon after his most famous 1963 novel “The Spy Who Came in from the Cold”, became such a great success.

39. Go the right way? : GEE
“Haw!” is a command given to a trained animal that is hauling something (like a horse or an ox). “Haw!” is used to instruct the animal to turn to the left. The equivalent command for a right turn is “Gee!” Just to confuse things, the same commands are used in the British Isles but with the opposite meanings. That must be pretty unsettling for jet-setting plow horses …

43. Writer with the given names Robert Lawrence : STINE
The author R. L. Stine is sometimes referred to as the Stephen King of children’s literature as he writes horror stories for young people.

51. Capital for King Zog : TIRANA
Tirana is the capital of Albania, and the nation’s largest city.

55. Setting for Sergei Eisenstein’s “Battleship Potemkin” : ODESSA
The city of Odessa (also “Odesa”) in Ukraine was founded relatively recently, in 1794 by Catherine the Great. The city was originally meant to be called Odessos after an ancient Greek city believed to have been located nearby. Catherine liked the way the locals pronounced the name as “Odessa” and so went with the less Greek-sounding name.

“The Battleship Potemkin” is a silent movie made in 1925. A famous scene in the movie takes place in the port of Odessa, when Tsarist soldiers massacre rebels on the giant stairway in the city, now known as the Potemkin Stairs.

57. Brisk competitor : NESTEA
Nestea is a brand of iced tea made by Nestlé. The name is a portmanteau of “Nestlé” and “tea”.

3. Trick-taking card game : HEARTS
Hearts is a fun card game that is in the Whist family of trick-taking games, as are Bridge (my favorite) and Spades.

4. About 252 cals. : BTU
In the world of heating, ventilation and air conditioning (HVAC), the power of a heating or cooling unit can be measured in British Thermal Units (BTUs). This dated unit is the amount of energy required to heat a pound of water so that the water’s temperature increases by one degree Fahrenheit.

5. Like M. Poirot : BELG
Hercule Poirot is Agatha Christie’s renowned detective, a wonderful Belgian who plies his trade from his base in London. Poirot’s most famous case is the “Murder on the Orient Express”. First appearing in “The Mysterious Affair at Styles”, published in 1920, Poirot finally succumbs to a heart condition in the 1975 book “Curtain: Poirot’s Last Case”. Famously, Poirot is fond of using his “little grey cells”.

6. Competitive, in a way : CAPITALISTIC
It is generally agreed that the French politician and historian Louis Blanc coined the term “capitalism” in 1850, although he himself was a socialist. Blanc’s definition for capitalism was the appropriation of capital by some to the exclusion of others. We use the term today to describe an economic system in which trade, industry and production are privately owned and driven by profit.

12. Rubbery compounds : LATEXES
Latex is a naturally occurring polymer made by some plants, that can also be made synthetically. About one in ten of the flowering plants in the world make the milky fluid called latex. It serves as a defense against insects and is exuded when a plant is injured or attacked by insects. Latex is collected commercially and is the source of natural rubber, which can be used to make things such as gloves, condoms and balloons.

30. Guinness adjective : OLDEST
“The Guinness Book of World Records” holds some records of its own. It is the best-selling, copyrighted series of books of all time and is one of the books most often stolen from public libraries! The book was first published in 1954 by two twins, Norris and Ross McWhirter. The McWhirter twins found themselves with a smash hit, and eventually became very famous in Britain hosting a TV show based on world records.

33. Good earth : LOESS
Loess is a wind-blown accumulation of silt. The word is German in origin and was first used to describe silt along the Rhine Valley.

34. Table : SET ASIDE
These “tabling” and “shelving” idioms drive me crazy, because they are often misused. If a topic is shelved, it is set aside. If a topic is tabled, it is brought “off the shelf” and put “on the table” for discussion. I know that language evolves, but I think it should at least make sense …

47. Illustrator Thomas : NAST
Thomas Nast was an American caricaturist and cartoonist. Nast was the creator of the Republican Party elephant, the Democratic Party donkey, Uncle Sam and the image of the plump and jocular Santa Claus that we use today.

54. New Left org. : SDS
Students for a Democratic Society (SDS) was an activist group in the sixties. The SDS organized the largest student strike in the history of the United States on 26 April 1968, with about a million students staying away from class that day. The “Students for a Democratic Society” name was revived in 2006 with the foundation of a new US-based student organization with left wing beliefs. Today’s SDS was founded by a pair of high school students from Greenwich Village, New York.