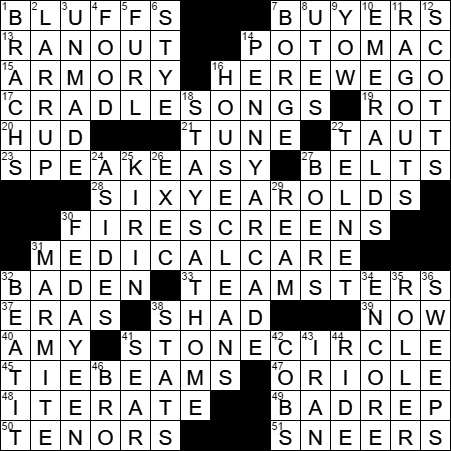 Today’s Wiki-est, Amazonian Googlies
Across
14. Harpers Ferry river : POTOMAC
Harpers Ferry is a town in West Virginia located at the confluence of the Potomac and Shenandoah rivers. We tend to remember Harpers Ferry as the place where John Brown led a raid on a federal armory during the Civil War with the intent of arming slaves.

19. Bunk : ROT
The word “bunk” is short for “bunkum”, the phonetic spelling of “Buncombe”, which is a county in North Carolina. Supposedly, a state representative made a dull and irrelevant speech that was directed to his home county of Buncombe, bringing the term “bunkum” into the language with the meaning of “nonsense”. The derivative word “debunk” first appeared in a novel by William Woodward in 1923, when he used it to describe “taking the bunk out of things”.

20. 1963 western based on Larry McMurtry’s “Horseman, Pass By” : HUD
The modern-day, western movie called “Hud” was released in 1963 and has become a classic. “Hud” stars Paul Newman (in the title role) and Patricia Neal and is an adaptation of a novel by Larry McMurtry called “Horseman, Pass By”. Patricia Neal’s role in the film was relatively small, yet her performance was enough to earn her an Academy Award for Best Actress.

23. Onetime Chicago Outfit establishment : SPEAKEASY
A speakeasy is an establishment that sells alcoholic drinks illegally. Speakeasies were very big in the US in the days of Prohibition. The obvious etymology, of a speakeasy owner asking his or her customers to “speak easy” so as not to draw attention to the authorities, is thought to have originated in 1888 in McKeesport just outside Pittsburgh.

32. Boy Scouts founder Robert ___-Powell : BADEN
As every little boy (of my era) knows, the Scouting movement was founded by Lord Baden Powell, in 1907. The Boy Scouts of America (BSA) soon followed, in 1910. And, the Boy Scouts motto is “Be Prepared”.

33. Drivers in cabs : TEAMSTERS
A teamster was originally a person who drove a team of animals that pulled a wagon. “Teamster” became a synonym for “truck driver”, as the trade union called the International Brotherhood of Teamsters grew in importance during the Depression.

38. Herring relative : SHAD
The shad is also known as the river herring. The eggs (roe) of the female shad are prized as a delicacy in the Eastern US.

40. Singer Winehouse : AMY
Amy Winehouse was a much ridiculed singer from the UK, and whose life was fraught with very public bouts of drug and alcohol abuse. Winehouse’s lifestyle caught up with her in 2011 when she was found dead from alcohol poisoning. The unfortunate singer was only 27 years old when she died, which means she is now viewed as a member of the “27 Club”. This “club” is made up of famous musicians who all died at the age of 27, including Brian Jones of the Rolling Stones, Jimi Hendrix, Janis Joplin, Jim Morrison of the Doors, and Kurt Cobain of Nirvana.

47. Bird whose name means “golden” : ORIOLE
The songbird called an oriole builds an interesting nest. It is a woven cup-like structure that is suspended from a branch like a hammock.

Down
6. Ophthalmological ailment : STYE
A stye is a bacterial infection of the sebaceous glands at the base of the eyelashes, and is also known as a hordeolum.

7. 20th-century comedian who was known as “The Clown Prince of Denmark” : BORGE
Victor Borge was such a talented entertainer. He was nicknamed “The Great Dane” as well as “The Clown Prince of Denmark”. Borge was a trained concert pianist, but soon discovered that the addition of a stand up comedy routine to his musical presentations brought him a lot of work. He toured Europe in the 1930s, and found himself in trouble for telling anti-Nazi jokes, so when Germany occupied Denmark during WWII Borge escaped to America.

8. Runnin’ ___ (N.C.A.A. team) : UTES
The Runnin’ Utes are the basketball team of the University of Utah. The team was given the nickname the Runnin’ Redskins back when Jack Gardner was the head coach from 1953 to 1971. The “Runnin’” part of the name was chosen because Gardner was famous for playing quick offenses. The “Redskins” name was later dropped in favor of the less controversial “Utes”.

10. Green valuables : EMERALDS
The mineral beryl is a source of a number of different, semi-precious stones, depending on the nature of the impurities present. Pure beryl is colorless; blue beryl is called aquamarine, and green beryl is emerald. The source of the green color is mainly chromium.

11. Dishes that might be prepared in Crock-Pots : RAGOUTS
A “ragout” is dish from French cuisine, highly-seasoned stew of either meat or fish. The name “ragout” comes from the verb “ragouter”, “to revive the taste”. The Italian “ragù” is a term borrowed from the French that describes a meat-based sauce served with pasta.

We often use the term “crockpot” as an alternative for “slow cooker”. The generic term comes from the trademark “Crock-Pot”, now owned by Sunbeam products.

12. Sister brand of Ortho : SCOTTS
Scotts Miracle-Gro Company was founded in 1868 by one Orlando Scott, initially selling seed to the agricultural industry. In the early 1900s, Scotts started to sell to homeowners, mainly supplying lawn seed. The company merged with the gardening company Miracle-Gro in 1955.

14. Retro amusement center : PENNY ARCADE
Our word “arcade” comes from the Latin “arcus” meaning “arc”. The first arcades were passages made from a series of arches. This could be an avenue of trees, and eventually any covered avenue. I remember arcades lined with shops and stores when I was growing up on the other side of the Atlantic. Arcades came to be lined with lots of amusements, resulting in amusement arcades and video game arcades.

22. Obsolescent online connection provider : TELNET
Telnet is a network protocol i.e. a defined format for controlling communications between devices in a network.

25. Popular Japanese beer : KIRIN
Kirin lager is the oldest brand of beer in Japan. The “Kirin” name comes from the Japanese word for a mythical Chinese creature.

26. Fortune reader, maybe : EXEC
“Fortune” is a bi-weekly business magazine that was founded by Henry Luce in 1930, just four months after the 1929 Wall Street Crash. “Fortune” is noted for its annual ranking of companies by revenue, especially the Fortune 500.

27. Orange Free State founders : BOERS
“Boer” is the Dutch and Afrikaans word for “farmer”, a word that was used to describe the Dutch-speaking people who settled parts of South Africa during the 1700s.

The Orange Free State was formed by the Boers in southern Africa in middle of the 19th century. The republic took its name from the Orange River.

30. Gaza Strip guerrillas : FEDAYEEN
After the 1948 Arab-Israeli War, the boundaries of the strip of land on the Mediterranean around Gaza were fixed in the Israel-Egypt Armistice Agreement. The boundaries were specifically defined but were not to be recognized as an international border. From 1948, the Gaza Strip was occupied and administered by Egypt, until 1967 when Israel took over occupation following the Six-Day War. In 1993, Israel and the PLO signed the Oslo Accords which handed over administration to the Palestinian Authority, but with Israel retaining control of the Gaza Strip’s airspace, some land borders and its territorial waters. The intent was to further this agreement, but discussions between the parties broke down. Israel withdrew from Gaza in 2005.

34. Added numbers? : ENCORE
“Encore” is French for “again, one more time”, and is a shout that an audience member will make here in North America to request another song, say. But, the term is not used this way in France. Rather, the audience will shout “Bis!”, which is the Italian for “twice!”

36. When people meters are used : SWEEPS
A people meter is a device used to measure viewing habits of audiences, particularly during “sweeps” periods.

43. 1979 revolution site : IRAN
Before 1935, the country we know today as Iran was called Persia by the Western world. The official name of the country since the Iranian Revolution of 1979 is the “Islamic Republic of Iran”.