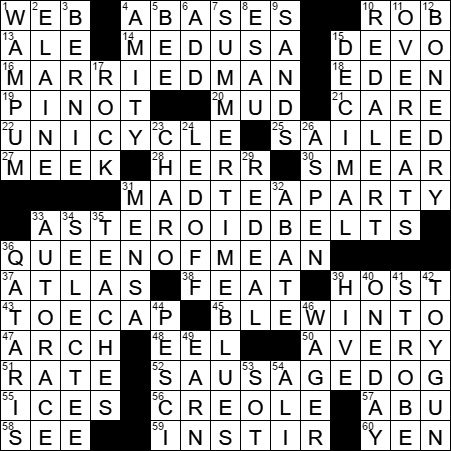 Today’s Wiki-est, Amazonian Googlies
Across
14. Mortal sister of the immortal Stheno and Euryale : MEDUSA
In Greek mythology, Medusa was one of the monstrous female creatures known as Gorgons. According to one version of the Medusa myth, she was once a beautiful woman. But she incurred the wrath of Athena who turned her lovely hair into serpents and made her face hideously ugly. Anyone who gazed directly at the transformed Medusa would turn into stone. She was eventually killed by the hero Perseus, who beheaded her. He carried Medusa’s head and used its powers as a weapon, before giving it to the goddess Athena to place on her shield. One myth holds that as Perseus was flying over Egypt with Medusa’s severed head, drop of her blood fell to the ground and formed asps.

15. Jumpsuit-wearing music group : DEVO
Devo is a band from Akron, Ohio formed back in 1973. The band’s biggest hit is “Whip It” released in 1980. Devo have a gimmick: the wearing of red, terraced plastic hats that are referred to as “energy domes”. Why? I have no idea …

18. Place whose population was 1, then 2, then 0 : EDEN
According to the Bible, Eve was created as Adam’s companion by God, creating her from Adam’s rib.

28. Sir in the Ruhr : HERR
The Ruhr is a large urban area in western Germany. The area is heavily populated, and is the fifth largest urban area in the whole of Europe, after Istanbul, Moscow, London and Paris. The Ruhr became heavily industrialized due to its large deposits of coal. By 1850, the area contained nearly 300 operating coal mines. Any coal deposits remaining in the area today are too expensive to exploit.

31. Where Alice is asked “Why is a raven like a writing-desk?” : MAD TEA PARTY
In Lewis Carroll’s “Alice’s Adventures in Wonderland”, the Mad Hatter makes his first appearance in a chapter called “A Mad Tea-Party”. This event is usually described as “The Mad Hatter’s Tea Party”, even though the Mad Hatter was just a guest. The host was the March Hare. In fact, the phrase “mad Hatter” doesn’t appear anywhere in Lewis Carroll’s novel, although the character, the Hatter (and sometimes “Hatta”), is described as mad.

33. Rock groups that are far out? : ASTEROID BELTS
The vast majority of asteroids in the Solar System are found in the main asteroid belt, which is located between the orbits of Mars and Jupiter. Four large asteroids (Ceres, Vesta, Pallas and Hygiea) make up about half the mass of the asteroid belt and are 400-950 km in diameter. The total mass of the belt is just 4% of the mass of our Moon. The larger asteroids are also known as “planetoids”.

36. Sobriquet for the woman who said “Only the little people pay taxes” : QUEEN OF MEAN
Leona Helmsley was a high-rolling real estate investor and hotel operator in New York City. She was convicted of income tax evasion in 1989 and sentenced to 16 years in jail. At her trial a witness quoted her as saying “We don’t pay taxes. Only the little people pay taxes.” No wonder she was known as the Queen of Mean …

37. Global support? : ATLAS
The famous Flemish geographer Gerardus Mercator published his first collection of maps in 1578. Mercator’s collection contained a frontispiece with an image of Atlas the Titan from Greek mythology holding up the world on his shoulders. That image gave us our term “atlas”.

43. Tip of a wingtip : TOE CAP
A brogue is more commonly called a wingtip here in the US, I think. The shoe design originated in Ireland and Scotland, and “brog” the Irish word (and similar Scottish word) for shoe gives rise to the name. The brogue/wingtip design includes decorative perforations in the leather uppers. The toe cap of a brogue curves back in a shape that suggest the tip of a bird’s wing, hence the alternative name.

52. Dachshund, colloquially : SAUSAGE DOG
The dachshund breed of dog was originally bred to chase and flush out badgers. The name “dachshund” is German and translates as “badger dog”.

56. Cuisine that includes trout meunière : CREOLE
Meunière sauce is a relatively simple sauce that is primarily served with fish. The ingredients are brown butter, chopped parsley and lemon. The simplicity of the recipe is reflected in its name, which means “miller’s wife”.

57. ___ Simbel (Egyptian landmark) : ABU
Abu Simbel is a location in southern Egypt, the site of two temples carved out of a mountainside. The two rock temples had to be relocated to Abu Simbel in 1968 to save them from being submerged in the water above the Aswan High Dam that was being built across the Nile River.

59. Doing time : IN STIR
The slang word “stir”, meaning a prison, probably has its roots in Start Newgate prison in London, where it was a nickname for the establishment.

Down
1. Indian bread? : WAMPUM
Wampum are sacred shell beads of North American tribes in the Eastern United States. The early European colonists often used wampum to trade with the native peoples. From this original usage, “wampum” came to be a slang term for money.

2. Jerry’s ex on TV : ELAINE
The character Elaine Benes, unlike the other lead characters (Jerry, Kramer and George), did not appear in the pilot episode of “Seinfeld”. NBC executives specified the addition of a female lead when they picked up the show citing that the situation was too “male-centric”.

3. First name in 2016 presidential politics : BERNIE
Bernie Sanders has served as US Senator from Vermont since 2007. Sanders describes himself as a democratic socialist, and used to appear on the ballot as an independent. Prior to joining the Democratic Party in 2015, Sanders had been the longest-serving independent in the history of the US Congress.

4. ___ Island (“Jaws” locale) : AMITY
“Jaws” is a thrilling 1975 movie directed by Steven Spielberg that is based on a novel of the same name by Peter Benchley. The film has a powerful cast, led by Roy Scheider, Richard Dreyfuss and Robert Shaw. “Jaws” was perhaps the first “summer blockbuster” with the highest box office take in history, a record that stood until “Star Wars” was released two years later.

5. Orthographic competition : BEE
Orthography is the art of writing words using with correct spelling. The use of bad spelling is known as cacography.

7. 1958 hit song that begins “I’m a-gonna raise a fuss, I’m a-gonna raise a holler” : SUMMERTIME BLUES
“Summertime Blues” was co-written by Eddie Cochran, who also produced the first recording, in 1958. The song has been covered many times since then, including a hit versions by the Who released in 1970.

8. Biblical polygamist : ESAU
According to the Bible’s Book of Genesis, Esau married Judith and Basemath, the daughters of two Hittites.

26. Tree known scientifically as Populus tremuloides : ASPEN
The “quaking” aspen tree is so called because the structure of the leaves causes them to move easily in the wind, to “tremble, quake”.

31. Sharp club : MENSA
If you ever learned Latin, “mensa” was probably taught to you in lesson one as it’s the word commonly used as an example of a first declension noun. Mensa means “table”. The Mensa organization, for folks with high IQs, was set up in Oxford, England back in 1946. To become a member, you have to have an IQ that is in the top 2% of the population.

33. Talladega event : AUTO RACE
The Talladega Superspeedway is the longest oval on the NASCAR circuit with a length of 2.66 miles. It also has seating for a whopping 175,000 spectators. The track opened in 1969, built on an abandoned airfield north of the city of Talladega, Alabama. The circuit is renowned for its supposed Talladega Jinx, which is said to have caused a number of accidents and incidents over the years. There has been a relatively high number of fatalities and crashes, including the death of driver Larry Smith in what was apparently a minor wreck, and the death of driver Davey Allison in a helicopter crash in the raceway’s infield. In another strange occurrence, driver Bobby Isaac left his car on the 90th lap of a race as he claims he heard voices that told him to park and get out of his vehicle.

36. Residents of the world’s richest country per capita : QATARIS
Qatar is a sovereign state in the Middle East occupying the Qatar Peninsula, itself located in the Arabian Peninsula. Qatar lies on the Persian Gulf and shares one land border, with Saudi Arabia to the south. Qatar has more oil and gas reserves per capita of population than any other country in the world. In 2010, Qatar had the fastest growing economy in the world, driven by the petrochemical industry. Qatar is scheduled to host the 2022 FIFA World Cup, although the nation’s eligibility to do so is under question after a far-reaching bribery scandal was uncovered at the sport’s governing body.

41. Flickering light : STROBE
A strobe light is a device that produces regular flashes, like the light on top of a police car. The term derives from the Greek “strobos” meaning “twisting, whirling”.

44. De Niro’s “Raging Bull” co-star : PESCI
Joe Pesci got his big break in movies with a supporting role in “Raging Bull” starring Robert De Niro, earning Pesci an Oscar nomination early in his career. There followed a string of gangster roles played alongside De Niro, namely “Once Upon a Time in America”, “Goodfellas” and “Casino”. But I like Pesci’s comedic acting best of all. He was marvelous in the “Home Alone” films, the “Lethal Weapon” series, and my personal favorite, “My Cousin Vinny”. Pesci gets a mention in the stage musical “Jersey Boys”, which isn’t too surprising as he is one of the show’s producers.

46. Bucks on a horse, e.g. : WAGER
“Buck” and “clam” are both slang terms for “a dollar”. The term “buck” has been around at least since 1856, and is thought to derive from the tradition of using buckskin as a unit of trade with Native Americans during the frontier days. It has been suggested that “clam” has a similar derivation, a throwback to the supposed use of clams as units of currency in ancient cultures.

53. Soak : SOT
Our word “sot” comes from the Old English “sott”, meaning “fool”. The word “sot” started to be associated with alcohol and not just foolery in the late 1500s.

54. “The Greatest” : ALI
Muhammad Ali won 56 professional fights, 37 of which were knockouts. He lost 5 fights, 4 being decisions and one being a technical knockout (TKO). The TKO-loss was Ali’s second-last fight, against Larry Holmes. By the time Ali took on Holmes, he was already showing signs of Parkinson’s Syndrome, although the diagnosis would not come until four years later.