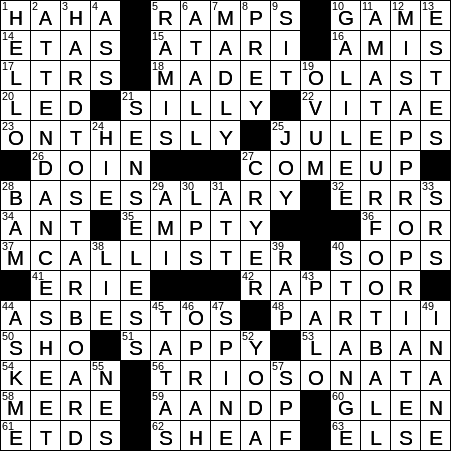 CROSSWORD SETTER: Jacob Stulberg
THEME: Inane
We have a mini-theme today, an INANE one. There are five identical clues, i.e. “Foolish”. The answers to these five “Foolish” clues are arranged in an E-shape in the grid, so they are IN AN E. How INANE is that?!

49D. Foolish … or, when read as three words, how this puzzle’s other four “foolish” answers are arranged : INANE or IN AN E

Today’s Wiki-est, Amazonian Googlies
Across
14. HH : ETAS
Eta is the seventh letter of the Greek alphabet, and is a forerunner of our Latin character “H”. Originally denoting a consonant, eta was used as a long vowel in Ancient Greek.

15. Centipede creator : ATARI
Centipede is an arcade game from Atari (it was my favorite!). The game was designed by Ed Logg and Dona Bailey, with Bailey being one of the few female game designers back then (it was released in 1980). Perhaps due to her influence, Centipede was the first arcade game to garner a significant female following.

16. “Lionel Asbo: State of England” novelist, 2012 : AMIS
I suppose the successful English novelist Martin Amis must have writing in his blood. He is the son of the respected author Kingsley Amis, a Booker Prize winner.

22. Curriculum ___ : VITAE
A curriculum vitae (CV) is a listing of someone’s work experience and qualifications, and is used mainly in making a job application. The term “curriculum vitae” can be translated from Latin as “course of life”.

23. Sub rosa : ON THE SLY
“Sub rosa” is a Latin term that translates literally as “under the rose”. The term is used to denote confidentiality, as the rose has been a symbol of secrecy since ancient times.

25. Bourbon drinks : JULEPS
The mint julep is a bourbon-based cocktail that is associated with the American South, and with the Kentucky Derby in particular. If you’d like to make yourself a mint julep, one recipe is:

41. City on Amtrak’s Boston-to-Chicago line : ERIE
Erie is a city in the very north of Pennsylvania, right on the southern shore of Lake Erie. The city takes its name from the Erie Native American tribe that resided in the area. Erie is nicknamed the Gem City, a reference to the “sparkling” Lake Erie.

42. Osprey, for one : RAPTOR
The Osprey is also known as the sea hawk or fish eagle.

44. Once-common building material : ASBESTOS
Asbestos was very, very popular in so many applications for many years. The world’s largest asbestos mine was in Quebec, Canada in the town of … Asbestos.

50. “Homeland” airer, for short : SHO
“Homeland” is a psychological drama shown on Showtime about a CIA officer who is convinced that a certain US Marine is a threat to the security of the United States. The show is based on a series from Israeli television called “Hatufim” (Prisoners of War”). I saw the first series of this show and highly recommend it …

59. Supermarket chain until 2015 : A AND P
The supermarket chain commonly known as A&P is more fully called the Great Atlantic & Pacific Tea Company. The company started out selling tea directly from plantations in China in 1859, and by cutting out the middleman became very successful selling tea at lower prices. A&P moved into groceries, still with the philosophy of undercutting prices, building large stores and even getting into legal trouble for using predatory pricing tactics. The company completely dominated the retail grocery market until competition ate into their share starting in the seventies.

Down
3. Command for turning sharply right : HARD TO STARBOARD!
The “starboard” side of a ship is her right side, a term that comes from the Old English “steobord” meaning “side on which a vessel was steered”. Apparently, old Germanic peoples constructed boats that were habitually propelled and steered by a paddle on the right side.

4. Biblical mount : ASS
The ass or donkey is mentioned several times in the Bible. One of the most-quoted biblical stories involving an ass is the story of Balaam. Balaam was a diviner who appears in the Book of Numbers in. In one account, Balaam is held to task by an angel for particularly cruel treatment of an ass.

5. “Groundhog Day” director : RAMIS
Harold Ramis was a real all-rounder, working as an actor, director and writer. Indeed, in both “Ghostbusters” and “Stripes” he was a co-writer as well as playing a lead character. Ramis worked as writer-director on “Caddyshack”, “National Lampoon’s Vacation”, “Groundhog Day” and “Analyze This”.

“Groundhog Day” is a 1993 comedy film that has already become a classic. The star of the movie is Bill Murray, with the lovely Andie MacDowell putting in a great supporting performance. “Groundhog Day” is set in Punxsutawney, Pennsylvania although it was actually filmed in the town of Woodstock, Illinois.

13. ___ Park : ESTES
Estes Park is a town in a beautiful part of the US, in northern Colorado. Estes Park is home to the headquarters of Rocky Mountain National Park.

24. “___ thee to hell for shame”: “Richard III” : HIE
“Richard III” is one of the more famous of William Shakespeare’s historical plays. A well-known 1955 version of the play was made for the big screen with Laurence Olivier playing the title role. The most oft-quoted words from “Richard III” are probably the opening lines “Now is the winter of our discontent/Made glorious summer by this sun of York”, and Richard’s plea at the climax of battle “A horse, a horse, my kingdom for a horse!”

27. Jon of “Two and a Half Men” : CRYER
Actor Jon Cryer first came to public attention playing Duckie Dale in the 1986 John Hughes movie “Pretty in Pink”. Cryer’s most famous role was Alan Harper on the sitcom “Two and Half Men”.

“Two and a Half Men” is a TV sitcom that is remarkably successful despite being fraught with controversy. The eighth season had to be suspended when the show’s star Charlie Sheen went into drug rehab and made disparaging comments about the show’s producers. Sheen was fired, and his role was taken over by a new character played by Ashton Kutcher. In 2012, Angus T. Jones who plays young Jake urged fans not to watch the show as it was “filth”. Jones had recently converted to the Seventh-day Adventist Church, and the show’s themes clashed with the church’s standards. Well, I enjoy the show …

31. Phone inits. : ATT
The original AT&T Corporation was known as the American Telephone and Telegraph Company, hence the contemporary abbreviation.

43. ___ Alto : PALO
The city of Palo Alto, California takes its name from a specific redwood tree called El Palo Alto (Spanish for “the tall stick”) that is located within the bounds of the city. The tree is 110 feet tall and over a thousand years old.

46. The “O” in television’s OWN : OPRAH
Oprah Winfrey Network (OWN)

47. Title locale : SPINE
In the US, the convention is to write the title on the spine of a book from top-to-bottom. In most of Europe, the convention is to write the title from bottom-to-top. We have a lot of books in the “library” in our house from both sides of the Atlantic, and so there is much moving of the head from left to right as we glance along our bookshelves.

52. Robe-wearing trainer of cinema : YODA
Yoda is one of the most beloved characters of the “Star Wars” series of films. Yoda’s voice is provided by the great modern-day puppeteer Frank Oz of “Muppets” fame.

57. Abbr. in a beach bag : SPF
In theory, the sun protection factor (SPF) is a calibrated measure of the effectiveness of a sunscreen in protecting the skin from harmful UV rays. The idea is that if you wear a lotion with say SPF 20, then it takes 20 times as much UV radiation to cause the skin to burn than it would take without protection. I say just stay out of the sun …