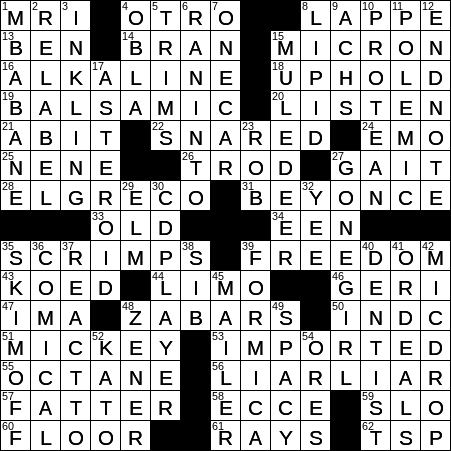 42D. Dramatic ending to a performance … or a hint to answering the six starred clues : MIC DROP

8. Frances Moore ___, author of the best-selling “Diet for a Small Planet” : LAPPE
Author Frances Moore Lappé’s most famous title is 1971’s “Diet for a Small Planet”. The main thesis of this work is that meat production is overly burdensome on the environment, and that world hunger is less an issue of lack of food, and more an issue of food policy.

13. HUD secretary Carson : BEN
Ben Carson is a neurosurgeon who made an unsuccessful bid to become the Republican candidate for US president in the 2016 primaries. Subsequently, Carson became Secretary of Housing and Urban Development in President Trump’s administration. He is a lacto-ovo vegetarian, a decision that Dr. Carson made out of concern for his health.

15. *Onetime White House nickname : MICRON (giving “Ron”)
Ron Reagan’s views couldn’t be any further from those of his father President Ronald Reagan, I’d say. Before the radio network Air America went bust, Ron had a daily 3-hour spot, and these days he makes frequent appearances on MSNBC. Young Reagan is also a good dancer, and for a while was a member of the Joffrey Ballet.

The measurement of length called a micron (plural “micra”) is more correctly referred to a micrometer (or “micrometre”). One micron is equivalent to one millionth of a meter.

16. High-pH : ALKALINE
As we all recall from chemistry class, a pH of 7 is considered neutral. Anything less than 7 is an acid, and anything above 7 is a base.

19. *What may keep a model’s weight down? : BALSAMIC (giving “balsa”)
Balsa is a very fast growing tree that is native to parts of South America. Even though balsa wood is very soft, it is actually classified as a hardwood, the softest of all the hardwoods (go figure!). Balsa is light and strong, so is commonly used in making model airplanes. Amazingly, in WWII a full-size British plane, the de Havilland Mosquito, was built largely from balsa and plywood. No wonder they called it “The Wooden Wonder” and “The Timber Terror”.

25. Rarest state bird : NENE
The bird called a nene is a native of Hawaii, and is also known as the Hawaiian goose. The name “nene” is imitative of its call. When Captain Cook landed on the islands in 1778, there were 25,000 nene living there. By 1950, the number was reduced by hunting to just 30 birds. Conservation efforts in recent years have been somewhat successful.

27. Shamble, e.g. : GAIT
“To shamble” is to walk awkwardly, to shuffle along. The term may derive from the use of “shamble” as a noun meaning a butcher’s shop. A shambling gait might involve the leg’s being someone splayed, resembling the legs on a butchers’ table. As an aside, the most famous old street in York in the north of England is called “the Shambles”. Back in the late 1800s, the relatively short street was home to twenty-five butchers’ show, although all are long gone now.

28. “The Disrobing of Christ” painter, 1579 : EL GRECO
“El Greco” (“the Greek”, in Spanish) was the nickname of the artist whose real name was Domenikos Theotokopoulos. El Greco was born in Crete in 1541, and moved to Venice to study art when he was in his early twenties. A few years later he moved to the city of Toledo in central Spain, where he lived and worked for the rest of his life.

31. Most-nominated woman ever in the Grammys : BEYONCE
Beyoncé Knowles established herself in the entertainment industry as the lead singer with the R&B group Destiny’s Child. She launched her solo singing career in 2003, two years after making her first appearance as an actor. In 2006 she played the lead in the very successful movie adaptation of the Broadway musical “Dreamgirls”. Beyoncé is married to rap star Jay-Z. She is also referred to affectionately as “Queen Bey”, a play on the phrase “the queen bee”.

44. Something that’s long and steep? : LIMO
Long in length, and steep in price.

The word “limousine” derives from the French city of Limoges. The area around Limoges is called the Limousin, and it gave its name to a cloak hood worn by local shepherds. In early motor cars, a driver would sit outside in the weather while the passengers would sit in the covered compartment. The driver would often wear a limousin-style protective hood, giving rise to that type of transportation being called a “limousine”. Well, that’s how the story goes anyway …

46. Pop singer Halliwell : GERI
Geri Halliwell was nicknamed Ginger Spice when she was with the Spice Girls, because of her red hair. Halliwell was quite a bit older than the rest of the group and so sometimes she was less charitably referred to as “Old Spice”. After launching her solo career, Halliwell released a fabulous 2001 version of the song “It’s Raining Men”, which was originally recorded by the Weather Girls in 1982. Great song …

48. Famed deli seen in Woody Allen’s “Manhattan” : ZABAR’S
Zabar’s is a famous food store and deli in Manhattan that shows up a lot in TV shows and movies. Zabar’s ran into a some problems a few years ago when a journalist reported that the store’s lobster salad, which had been a hit for 15 years, did not in fact contain any lobster. The spread is now called “Zabster Zalad”.

51. *Anthem writer : MICKEY (giving “Key”)
The lyrics of “The Star-Spangled Banner” were written first as a poem by Francis Scott Key. Key’s inspiration was the bombarding by the British of the American forces at Fort McHenry that he witnessed during the Battle of Baltimore in September 1814. The words were then set to the tune of a popular British drinking song penned by John Stafford Smith called “The Anacreontic Song”, with the Anacreontic Society being a men’s club in London.

55. It’s usually in the 80s or 90s : OCTANE
The difference between a premium and regular gasoline is its octane rating. The octane rating is measure of the resistance of the gasoline to auto-ignition i.e. its resistance to ignition just by virtue of being compressed in the cylinder. This auto-ignition is undesirable as multiple-cylinder engines are designed so that ignition within each cylinder takes place precisely when the plug sparks, and not before. If ignition occurs before the spark is created, the resulting phenomenon is called “knocking”. We sometimes use the adjective “high-octane” to mean “intense, dynamic, high-powered”

56. Start of a kids’ taunt : LIAR! LIAR!
The full rhyme used by children to deride someone not telling the truth is:

The rhyme is the source of the title for the 1997 Jim Carrey comedy “Liar Liar”. “Liar Liar” is an amusing film about a lawyer who finds himself only able to tell the truth and cannot tell a lie, all because his son made a birthday wish.

58. “___ homo” : ECCE
According to the Gospel of John, when Pilate presented a scourged and beaten Jesus to the crowd he used the words “Ecce homo”, Latin for “Behold the man”.

61. Florida pro team : RAYS
The Tampa Bay Rays are a relatively “young” franchise, having been formed in 1998. The initial name of the franchise was the Tampa Bay Devil Rays. While known as the Devil Rays, the team finished last in the league in almost every year. The name was changed to the Tampa Bay Rays in 2008, and I am told the Rays started into a streak of winning seasons soon after.

Down
1. Capital of Swaziland : MBABANE
The Kingdom of Swaziland is located in southern Africa and is a nation almost completely surrounded by South Africa. Swaziland is quite a small country, only 120 miles long from north to south, and 80 miles from east to west.

4. Start of a Beatles title : OB-LA-
“Ob-La-Di, Ob-La-Da” is one of many songs credited to Lennon/McCartney that was actually written by just one of the pair. Paul McCartney wrote this one, a song that John Lennon really did not like at all. Apparently Lennon was quite obstructionist during the recording of the song and even walked out at one point.

7. “It’s just getting out of ___ and getting into another” (John Lennon on death) : ONE CAR
John Lennon grew up in a modest home in Liverpool in the northwest of England. Named “Mendips”, the house belonged to Lennon’s maternal aunt and her husband. Lennon was raised by his aunt from the age of five, after his mother was persuaded that the arrangement would be of benefit to young John. Mendips was purchased by Lennon’s widow Yoko Ono in 2002, who then handed it over the National Trust, a British conservation organization.

8. Fatty acid, for one : LIPID
Lipids are a groups of naturally occurring molecules, including fats, waxes and fat-soluble vitamins (like A, D and E). Sometimes we use the words “fat” and “lipid” interchangeably but fats are a subgroup of lipids, specifically a group best called triglycerides.

10. Ever-changing : PROTEAN
In Greek mythology, the sea-god Proteus had the ability to take on new shapes to hide himself. This led to our word “protean”, meaning someone or something that is ever-changing and versatile.

11. *Word after North or South : POLEMIC (giving “Pole”)
“Polemic” can also be spelled as “polemical”, and either way it describes something controversial. The word comes into English from the Greek “polemos” meaning “war”.

17. Something that may be found in a belt : ASTEROID
The vast majority of asteroids in the Solar System are found in the main asteroid belt, which is located between the orbits of Mars and Jupiter. Four large asteroids (Ceres, Vesta, Pallas and Hygiea) make up about half the mass of the asteroid belt and are 400-950 km in diameter. The total mass of the belt is just 4% of the mass of our Moon. The larger asteroids are also known as “planetoids”.

27. 2014 psychological thriller based on a Gillian Flynn novel : GONE GIRL
“Gone Girl” is a thriller novel written by Gillian Flynn that was first published in 2012. The story tells of a man whose wife has disappeared, with the reader not being certain if the husband is involved in the disappearance. The book was adapted into a movie of the same name released in 2014, starring Ben Affleck and Rosamund Pike.

39. *Discussion venues : FORMICA (giving “fora”)
The Latin “forum” (plural “fora”) translates as “marketplace, town square”. “The Roman Forum” is the most famous example of such a space. The Forum is at the heart of the city of Rome is surrounded by the ruins of several ancient government buildings, and has been referred to as the most celebrated meeting place in the world.

42. Dramatic ending to a performance … or a hint to answering the six starred clues : MIC DROP
A “mic drop” takes place when a performer has done particularly well and decides to celebrate by throwing or dropping the microphone to the floor. That doesn’t seem to happen at the performances I tend to frequent …

48. ___ cards (tools used in ESP testing) : ZENER
Zener cards were developed in the early thirties by psychologist Karl Zener, for use in experiments related to extra-sensory perception (ESP). These five simple and distinctive cards replaced the standard deck of cards that had been used in trials up to that point. The five symbols used on the cards are a circle, a cross, three wavy lines, a square and a star.

52. The Green Hornet’s masked driver : KATO
In “The Green Hornet” television series, Kato was famously played by Bruce Lee. The Kato role has been cited as a driving force behind the increase in popularity of martial arts in the US during the sixties.