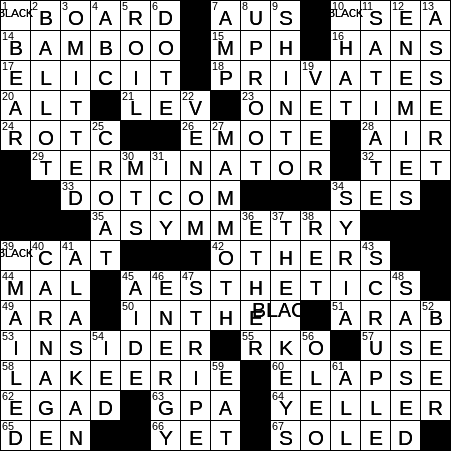 35A. Feature of this puzzle that’s “fixed” by a literal reading of four squares : ASYMMETRY

1A. Menu holder at many a cafe : BLACKBOARD
10A. Body of water near Georgia : BLACK SEA
39A. Worry for the superstitious : BLACK CAT
50A. Solvent : IN THE BLACK
1D. University of Maine mascot : BLACK BEAR
10D. Villain : BLACK HAT
37D. Five-time Grammy-winning duo from the 2010s : THE BLACK KEYS
39D. Extorted from : BLACKMAILED

Today’s Wiki-est, Amazonian Googlies
Across
7. Where Schwarzenegger was born: Abbr. : AUS
The body-builder, actor and politician Arnold Schwarzenegger was born in Graz in Austria, the son of the local police chief. Schwarzenegger’s family name translates into the more prosaic “black plough man”. In his bodybuilding days, he was often referred to as the Austrian Oak. When he was Governor of California he was called “the Governator”, a play on his role in the “The Terminator” series of movies.

10. Body of water near Georgia : BLACK SEA
The Black Sea is in southeastern Europe just south of Ukraine. In the north of the Black Sea is the Crimean Peninsula.

14. Shoots in the jungle : BAMBOO
The grass known as bamboo is one of the fastest-growing plants in the world. Sadly, there are stories of growing bamboo being used as a device of torture. Supposedly, a victim can be staked out over bamboo shoots so that the shoots grow into the human flesh. Theoretically, bamboo can grow several inches in just three days.

21. Book after Exod. : LEV
In the Hebrew Bible, the Book of Leviticus comes after the Book of Exodus and before the Book of Numbers.

24. Some campus marchers, briefly : ROTC
The Reserve Officers’ Training Corps (ROTC) is a training program for officers based in colleges all around the US. The ROTC program was established in 1862 when as a condition of receiving a land-grant to create colleges, the federal government required that military tactics be part of a new school’s curriculum.

29. 1984 movie with a 100% positive rating on Rotten Tomatoes, with “The” : TERMINATOR
The 1984 movie “The Terminator” was directed by James Cameron. It was a relatively low budget production, costing $6.4 million. It has grossed around $80 million to date, so no wonder the Terminator said “I’ll be back”.

32. Hanoi holiday : TET
The full name for the New Year holiday in Vietnam is “Tet Nguyen Dan” meaning “Feast of the First Morning”, with the reference being to the arrival of the season of spring. Tet usually falls on the same day as Chinese New Year.

44. Ill, in Lille : MAL
Lille is a large city in the very north of France sitting right on the border with Belgium. The name “Lille” is a derivation of the term “l’isle” meaning “the island”. The name “L’Isle” dates back to 1066, and is a reference to a castle that once stood on an island in the Deûle river that runs through the city. The city grew around the island and the castle.

55. Film studio once owned by Howard Hughes : RKO
The RKO Pictures studio was formed when RCA (RADIO Corporation of America) bought the KEITH-Albee-ORPHEUM theaters (and Joe Kennedy’s Film Booking Offices of America). The RKO initialism then comes from the words “Radio”, “Keith” and “Orpheum”.

63. A good one gets you on a list, briefly : GPA
Grade point average (GPA)

64. Old ___ : YELLER
“Old Yeller” is a children’s novel by Fred Gipson that was first published in 1956. “Old Yeller” was to be the first in a series of three books, followed by “Savage Sam” in 1962 and “Little Arliss” in 1978. The original was made into a very famous Walt Disney film released in 1957. Disney also produced the “Savage Sam” sequel, in 1963. The title character in “Old Yeller” is a yellow-colored dog that is adopted by a teenage boy. Spoiler alert: in the end, the dog dies …

Down
1. University of Maine mascot : BLACK BEAR
The town of Orono is home to the University of Maine, founded in 1862. The college is actually located on an island (Marsh island) lying between the Penobscot and Stillwater rivers. The town of Orono is named after Joseph Orono, a chief of the Penobscot Nation. The school’s athletic teams are named the Maine Black Bears.

4. “Modern Family” network : ABC
“Modern Family” is a marvelous television show shown on ABC since 2009. The show’s format is that of a “mockumentary”, with the cast often addressing the camera directly. In that respect “Modern Family” resembles two other excellent shows: “The Office” and “Parks and Recreation”, both of which might also be described a “mockumentaries”.

6. Coddle, with “on” : DOTE
The verb “to coddle”, meaning “to treat tenderly”, was actually coined in 1815 by Jane Austen in her novel “Emma”. At least, that is the first written record we have of the verb’s usage. John Knightley (younger brother of George Knightley) addresses his wife Isabella (elder sister of Emma Woodhouse) with the following words:

7. Gig need : AMP
Musicians use “gig” to describe a job, a performance. The term originated in the early 1900s in the world of jazz.

9. Religion with public shrines : SHINTO
It is perhaps best not to describe Shinto as a religion, but more as a “spirituality of the Japanese people”, a spirituality that encompasses folklore, history and mythology. Having said that, “Shinto” translates literally as “Way of the Gods”. Most people in Japan who are described as practicing Shinto, also practice Buddhism.

10. Villain : BLACK HAT
In western movies and television, the bad guys tend to wear black hats, and the good guys wear white. Well, that’s the perception. As a result, we’ve come to use the phrase “black hat” to mean “villain”.

11. Give plenty : SATIATE
“Sate” is a variant of the older word “satiate”. Both terms can mean either to satisfy an appetite fully, or to eat to excess.

25. Hungarian’s neighbor : CROAT
The Republic of Croatia is a Balkan country. The Croats declared independence from Yugoslavia in 1991. Croatia became a member of NATO in 2009, and a member of the European Union in 2013.

27. Animal found in the La Brea Tar Pits : MAMMOTH
The La Brea Tar Pits are located right in the heart of the city of Los Angeles. At the site there is a constant flow of tar that seeps up to the surface from underground, a phenomenon that has been around for tens of thousands of years. What is significant is that much of the seeping tar is covered by water. Over many, many centuries animals came to the water to drink and became trapped in the tar as they entered the water to quench their thirsts. The tar then preserved the bones of the dead animals. Today a museum is located right by the Tar Pits, recovering bones and displaying specimens of the animals found there. It’s well worth a visit if you are in town …

34. Civil war locale beginning in 2011 : SYRIA
Since the onset of the Syrian Civil War in 2011, a refugee crisis has developed involving almost 7 million internally displaced persons and almost 5 million displaced persons outside of Syria (as of February 2016). Those are staggering numbers, especially when one compares them to the estimated Syrian population of 17 million in 2014.

36. It will put you to sleep : ETHER
Ethers are a whole class of organic compounds, but in the vernacular “ether” is specifically diethyl ether. Diethyl ether was once very popular as a general anesthetic.

37. Five-time Grammy-winning duo from the 2010s : THE BLACK KEYS
The Black Keys are a rock band, a duo from Akron, Ohio. Dan Auerbach on guitar, and Patrick Carney on drums, formed the Black Keys in 2001.

46. Cabinet department : ENERGY
The US Department of Energy (DOE) came into being largely as a result of the 1973 oil crisis. The DOE was founded in 1977 by the Carter administration. The DOE is responsible for regulating the production of nuclear power, and it is also responsible for the nation’s nuclear weapons. The official DOE seal features symbols denoting five sources of energy: the sun, an atom, an oil derrick, a windmill and a dynamo.

54. Mil. danger : IED
Having spent much of my life in the border areas between southern and Northern Ireland, I am sadly all too familiar with the devastating effects of improvised explosive devices (IEDs). One has to admire the bravery of soldiers who spend their careers defusing (or attempting to defuse) such devices in order to save the lives and property of others.