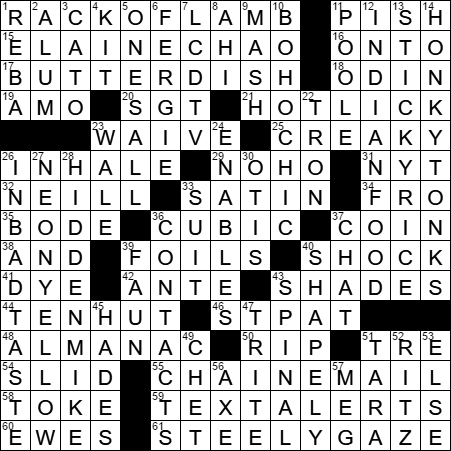 Today’s Wiki-est, Amazonian Googlies
Across
15. First Chinese-American cabinet member : ELAINE CHAO
When President George W. Bush appointed Elaine Chao as Secretary of Labor, he made a bit of history as Chao then became the first Chinese American in history to hold a cabinet post. It turned out that Chao became the only cabinet member to hold her post for President Bush’s full eight years in office. In 1993, Chao married Mitch McConnell, the Republican Leader of the US Senate.

18. Owner of the horse Sleipnir : ODIN
Sleipnir is an eight-legged horse of Norse mythology, the steed that was ridden by Odin.

20. Abbr. before Friday : SGT
The TV detective show “Dragnet” opened up each episode with lines spoken by the character Sergeant Joe Friday:

31. Washington Post competitor: Abbr. : NYT
“The New York Times” (NYT) has been published since 1851. These days a viable alternative to buying the paper is to read the news online. NYTimes.com is the most popular online newspaper website in the country.

“The Washington Post” is the oldest paper still being published in the DC area, having been founded in 1877. Famously, “The Post” reporters Bob Woodward and Carl Bernstein led the media’s investigation into what we now called the Watergate scandal. “The Washington Post” was purchased in 2013 by Jeff Bezos, the founder and CEO of Amazon.com.

32. “Jurassic Park” co-star Sam : NEILL
Sam Neill is a very talented actor from New Zealand. I really enjoyed Neill in a 1983 television miniseries called “Reilly, Ace of Spies”, about a British spy operation during WWI. He is perhaps better-known for his roles in the movies “Omen III”, “Dead Calm”, “Jurassic Park” and “The Hunt for Red October”.

“Jurassic Park” is a 1990 novel by Michael Crichton that was adapted into a hugely successful movie by Steven Spielberg in 1993. One of the main premises of the novel is that dinosaur DNA could be harvested from mosquitoes trapped in amber (fossilized tree resin), the DNA coming from the dinosaur blood consumed by the mosquitoes. The dinosaur DNA is then sequenced and used to create clones of the original beasts. A clever idea, but apparently not very practical from what I’ve read …

33. Teddy material : SATIN
The item of lingerie known as a teddy can also be called “camiknickers”. The alternative name was used when the one-piece garment was introduced in the twenties, a combination of a camisole and panties (aka knickers).

46. Mar. figure : ST PAT
There is a fair amount known about Saint Patrick, some of which comes from two letters written in his own hand. St. Patrick lived in the fifth century, but was not born in Ireland. He was first brought to Ireland at about 16 years of age from his native Britain, by Irish raiders who made him a slave for six years. Patrick managed to escape and returned to his homeland where he studied and entered the Church. He went back to Ireland as a bishop and a missionary and there lived out the rest of his life. There seems to be good evidence that he died on March 17th (now celebrated annually as Saint Patrick’s Day), although the year is less clear. The stories about shamrock and snakes, I am afraid they are the stuff of legend.

58. Take a hit : TOKE
“Toke” is a slang term for a puff on a marijuana cigarette, or on a pipe containing the drug.

60. Sources of ricotta cheese : EWES
Ricotta is an Italian cheese made from the milk of a sheep or a cow. Ricotta is actually produced from the whey of the milk, the liquid left after the curds have been separated out (curds are used to make “traditional” cheese). The whey is heated again so that the remaining protein, above and beyond that in the curd already removed, precipitates out making ricotta cheese. The word “ricotta” literally means “recooked”, which makes sense to me now …

Down
1. First name in country : REBA
Reba McEntire is a country music singer and television actress. McEntire starred in her own sitcom called “Reba” that aired on the WB and the CW cable channels from 2001 to 2007.

3. Who wrote “Wise men learn more from fools than fools from the wise” : CATO
Cato the Elder was a Roman statesman, known historically as “the elder” in order to distinguish him from his great-grandson, Cato the Younger. Cato the Elder’s ultimate position within Roman society was that of Censor, making him responsible for maintaining the census, and for supervising public morality.

4. Vixen’s offspring : KIT
Kits are the young of several mammalian species, including the ferret and the fox. “Kit” is probably a shortened form of “kitten”.

8. Tuna type : AHI
Yellowfin and bigeye tuna are usually marketed as “ahi”, the Hawaiian name. They are both big fish, with yellowfish tuna often weighing over 300 pounds, and bigeye tuna getting up to 400 pounds.

10. Hippie-influenced fashion trend : BOHO-CHIC
Boho-chic is a style of fashion that grew out of the bohemian and hippie looks.

11. Grace ___, servant in “Jane Eyre” : POOLE
“Jane Eyre” is a celebrated novel written by Charlotte Brontë, under the pen name Currer Bell. Over the years, I’ve shared here on my blogs that the “Jane Eyre” story line is a little too dark and Gothic for my taste, but a very persuasive blog reader convinced me to look more at the romantic side of the story and give it a second chance. I watched a wonderful 4-hour television adaptation of the novel made by the BBC a while back and I have to say that because I was focused on the relationship between Jane and Rochester, I was able to push past the Gothic influences (that depress me) so I really enjoyed the story. I thoroughly recommend the 2006 BBC adaptation to fans of the novel.

12. Curries, samosas, etc. : INDIAN FOOD
Curry powder is a mixture of spices used in South Asian cuisine. The actual composition of curry powder varies depending on the cuisine. The term “curry” is an anglicization of the Tamil “kari” meaning “sauce”.

13. Staple of Thai cuisine : STICKY RICE
“Sticky rice” is actually a type of rice, and not a means of preparation. Sticky rice is more usually called “glutinous rice”, even though it does not contain dietary gluten.

14. Dives : HONKY-TONKS
A honky-tonk is a bar with musical entertainment, usually country music. The etymology of the term “honky-tonk” seems unclear. The term has evolved to mean any cheap, noisy bar or dance hall.

22. Suffix with magne- : -TRON
A magnetron is a vacuum tube that is used to generate microwaves. Magnetrons are used in radar devices and microwave ovens.

23. Corduroy rib : WALE
Wales are parallel ribs in a fabric such as corduroy.

30. Big name in escalators : OTIS
Elevators (simple hoists) have been around for a long time. What Elisha Otis did was come up with the “safety elevator”, a design that he showcased at the 1853 World’s Fair in New York. At the Fair, Otis would stand on an elevated platform in front of onlookers and order his assistant to cut the single rope holding up the platform. His safety system kicked in when the platform had only fallen a few inches, amazing the crowd. After this demonstration, the orders came rolling in.

39. Mythical piper : FAUN
Fauns are regarded as the Roman mythological equivalent of the Greek satyrs, but fauns were half-man and half-goat and much more “carefree” in personality than their Hellenic cousins. In the modern age we are quite familiar with Mr. Tumnus, the faun-like character encountered by the children entering the world of Narnia in C. S. Lewis’s “The Lion, the Witch and the Wardrobe”.

45. Another name for Pluto : HADES
Hades was the god of the underworld to the ancient Greeks. Over time, Hades gave his name to the underworld itself, the place where the dead reside. The term “Hades” was also adopted into the Christian tradition, as an alternative name for hell. But, the concept of hell in Christianity is more akin to the Greek “Tartarus”, which is a dark and gloomy dungeon located in Hades, a place of suffering and torment.

49. Jazzman Baker : CHET
The famous jazz trumpeter Chet Baker was noted for his heroin addiction, a problem that nearly put an end to his performing career. He managed a comeback in the late seventies, mainly appearing and recording in Europe. But he never kicked the drug habit and was found dead one day after falling from his hotel room window in Amsterdam.

51. Reid of “Sharknado” : TARA
Tara Reid is an actress known for roles she played on television and the big screen. My guess is her most remembered performances were in the “American Pie” series of movies in which she played Vicky. Sadly, Reid succumbed to the pressure to alter her looks with plastic surgery. In interviews, she has shared that her first experience under the knife “went wrong” leading to more surgeries in attempts to rectify the resulting deformity.

52. Luxury hotel in London’s Piccadilly district, with “the” : RITZ
César Ritz was a Swiss hotelier, who had a reputation for developing the most luxurious of accommodations and attracting the wealthiest clientèle. He opened the Hotel Ritz in Paris in 1898 and the second of his most famous hotels, the Ritz Hotel in London, in 1906. Ritz was lucky in his career, as before starting his own hotel chain he had been dismissed from the Savoy Hotel in London, implicated in the disappearance of a substantial amount of wine and spirits. Today’s Ritz-Carlton Hotel Company was founded in 1983, although the chain has its roots in the properties developed by César Ritz.