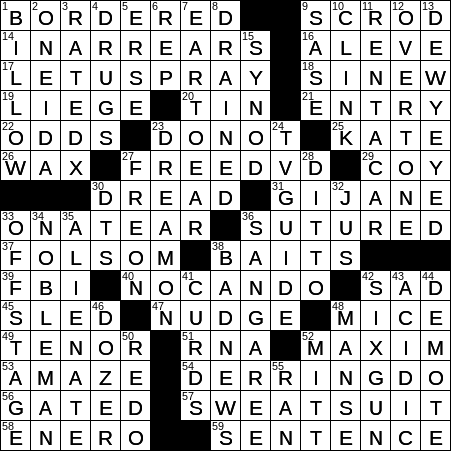 Today’s Wiki-est, Amazonian Googlies
Across
9. New England staple : SCROD
Scrod is the name given to fish that has been “scrawed” i.e. split open, dried and then broiled.

16. Brand with a “PM” variety : ALEVE
Aleve is a brand name used for the anti-inflammatory drug Naproxen sodium.

19. Loyal subject : LIEGE
A liege was a feudal lord, one to whom service or allegiance was owed under feudal law. “Liege” was also the term used for one who owed allegiance or service to a lord. Very confusing …

25. Prince George’s mom : KATE
The British laws of royal succession changed in 2013. The centuries old law dictated that males in a family were ranked higher than all females, regardless of age. The current line of sccession is:

31. Title nickname of filmdom’s Lt. Jordan O’Neil : GI JANE
G.I. Joe was the original “action figure”, the first toy to carry that description. G.I. Joe first hit the shelves in 1964. There have been a few movies based on the G.I. Joe figure, but, more famous than all of them I would say is the 1997 movie “G.I. Jane” starring Demi Moore in the title role. I thought that “G.I. Jane” had some potential, to be honest, but it really did not deliver in the end.

39. Antipiracy grp. : FBI
What we know today as the FBI was set up in 1908 as the BOI, the Bureau of Investigation. The name was changed to the Federal Bureau of Investigation in 1935. The Bureau was set up at the behest of President Theodore Roosevelt. President Roosevelt was largely moved to do so after the 1901 assassination of President McKinley, as there was a perception that anarchists were threatening law and order. The FBI’s motto uses the organization’s initialism, and is “Fidelity, Bravery, Integrity”.

48. They click : MICE
The first computer mouse was invented at the Stanford Research Institute in 1963, by one Douglas Engelbart. Sadly for him, his patent ran out before mice became standard equipment on computers, so he never made any money from his amazing invention.

49. Barbershop part : TENOR
Barbershop music is played in the a cappella style, meaning that it is unaccompanied vocal music. Barbershop music originated in the African American communities in the South, as gospel quartets often gathered in neighborhood barber shops to sing together.

51. Transcription product : RNA
The two most common nucleic acids are deoxyribonucleic acid (DNA) and ribonucleic acid (RNA), both of which play crucial roles in genetics. The DNA contains the genetic instructions used to keep living organisms functioning, and RNA is used to transcribe that information from the DNA to protein “generators” called ribosomes.

54. Exploits : DERRING-DO
As one might expect, “derring-do” (plural is “derrings-do”) comes from the phrase “daring to do”, which back in the 14th century was written as “dorrying don”.

9. Aid for an ed. : SASE
An SAE is a “stamped, addressed envelope”. An SASE is a “self-addressed, stamped envelope”.

11. Dollar, for one : RENT-A-CAR
Dollar Rent A Car was founded in 1965. Chrysler acquired the company in 1990 and merged it with Thrifty Car Rental, which Chrysler had purchased a year earlier.

15. Diocesan assembly : SYNOD
The word synod comes from the Greek word for assembly, or meeting. A synod is a church council, usually in the Christian faith.

24. Desi Arnaz Jr. was on its first cover : TV GUIDE
The first national “TV Guide” was issued in 1953. The cover of that first issue featured a photo of newborn Desi Arnaz, Jr., son of Lucille Ball.

27. It has a chilling effect : FREON
Freon is a DuPont trade name for a group of compounds used as a refrigerant and also as a propellant in aerosols. Freon is used in the compressors of air conditioners as a vital component in the air-cooling mechanism. Freon used to contain chlorofluorocarbons (CFCs), which had a devastating effect on the Earth’s ozone layer. Use of CFCs is now banned, or at least severely restricted.

28. “That makes two of us” : DITTO
“Ditto” was originally used in Italian (from Tuscan dialect) to avoid repetition of the names of months in a series of dates. So, “ditto” is just another wonderful import from that lovely land …

30. Danger while drying out : DTS
The episodes of delirium that can accompany withdrawal from alcohol are called Delirium Tremens (the DTs). The literal translation of this Latin phrase is “trembling madness”.

48. Shepherd’s home : MANSE
A manse is a minister’s home in various Christian traditions. “Manse” derives from “mansus”, the Latin for “dwelling”. The term can also be used for any stately residence.