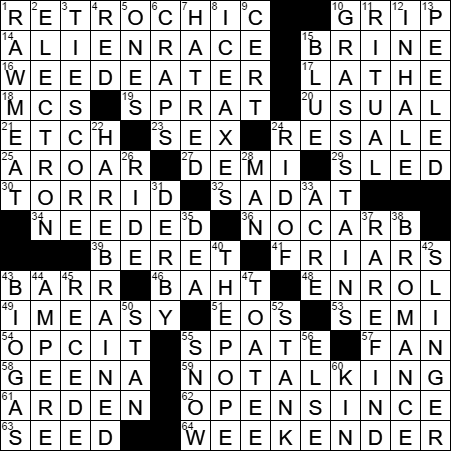 Today’s Wiki-est, Amazonian Googlies
Across
14. Time Lords, e.g. : ALIEN RACE
The Time Lords are an alien race on the BBC sci-fi show “Doctor Who”. In fact, the title character, known as “the Doctor”, is a Time Lord.

15. Kimchi solution : BRINE
Kimchi is a traditional dish from Korea. The original kimchi is made from fermented vegetables, and is pretty strong stuff …

18. Roast figures : MCS
The term “emcee” comes from “MC”, an initialism standing for Master or Mistress of Ceremonies.

19. Anchovy or sand eel : SPRAT
A sprat is a forage fish that travels in large schools with other species of fish, and that looks like a baby sardine. Although sprats are found all over the world, they are particularly associated with the Baltic Sea in Northern Europe.

27. Celebrity ex of Bruce and Ashton : DEMI
Demi Moore was born Demetria Guynes and took the name Demi Moore when she married her first husband, Freddy Moore. Moore’s second husband was Bruce Willis. She changed her name to Demi Guynes Kutcher a few years after marrying her third husband, Ashton Kutcher. But, Kutcher and Moore split in 2013.

32. 1978 Nobel sharer : SADAT
Anwar Sadat was the third President of Egypt right up to the time of his assassination in 1981. Sadat won the Nobel Peace Prize in 1978 along with Israeli Prime Minister Menachem Begin for the role played in crafting the Israel-Egypt Peace Treaty of 1978 at Camp David. It was this agreement that largely led to Sadat’s assassination three years later.

39. Part of a Guardian Angel’s attire : BERET
The Guardian Angels is an organization of unarmed volunteers who patrol high-crime areas and make citizen arrests when necessary. The group was founded in 1979 and originally focused on patrols of the New York City subway system. Now there are Guardian Angels operating in 15 countries and 144 cities around the world. You might recognize a Guardian Angel from his or her distinctive red beret.

41. Roast figures : FRIARS
The Friars Club is a private show-business club in New York City that has roots dating back to 1904. Back then the club was called the Press Agents Association. Within a few years the name was changed to reflect its broadening membership of actors and musicians. The name “Friar” was chosen as it comes from the Latin for “brother”, deemed to a good name for a fraternal organization. Famously, the Friars Club hosts events in which a celebrity is “roasted” by a panel of comedians and show business VIPs.

43. Comic who was the 2012 presidential nominee of the Peace and Freedom Party : BARR
The comedian Roseanne Barr is perhaps best known as the star of her own sitcom called “Roseanne” in which she played the character Roseanne Conner. In 2012 Barr unsuccessfully vied for the Green Party’s nomination for US President. She didn’t give up though, and was successful in winning the nomination of the Peace and Freedom Party. In the 2012 presidential election she earned over 60,000 votes, and placed sixth in the list of candidates.

46. Bangkok banknotes : BAHT
The baht is the currency of Thailand, and is subdivided into 100 satang.

Bangkok is the capital city of Thailand. The exact etymology of the name “Bangkok” seems unclear, although “bang” is a Thai word meaning “a village situated on a stream”.

48. Join the club, in Canterbury : ENROL
Canterbury is a city in the southeast of England in the county of Kent. Canterbury is famous for Canterbury Cathedral where Thomas Becket was murdered in 1170, making it a pilgrimage destination for Christians. It was one of these pilgrimages that was the inspiration for Geoffrey Chaucer’s “The Canterbury Tales” written in the 14th century.

51. Mother of the wind gods : EOS
In Greek mythology, Eos is the goddess of the dawn who lived at the edge of the ocean. Eos would wake each morning to welcome her brother Helios the sun. The Roman equivalent of Eos is Aurora.

54. Cousin of ibid. : OP CIT
Op. cit. is short for “opus citatum”, Latin for “the work cited”. Op. cit. is used in footnotes to refer the reader to an earlier citation. It is similar to “ibid”, except that ibid refers the reader to the last citation, the one immediately above.

58. Davis of “The Accidental Tourist” : GEENA
As well as being a successful Hollywood actress, Geena Davis is an accomplished archer and came close to qualifying for the US archery team for the 2000 Summer Olympics. Davis is also a member of American Mensa. She is quite the lady …

“The Accidental Tourist” is a novel by Anne Tyler, first published in 1985. The book was famously adapted into a 1988 movie starring William Hurt, Kathleen Turner and Geena Davis (who won a Best Supporting Actress Oscar for her performance).

63. Bracket position : SEED
A “seeded” player or team in a tournament is one given a preliminary ranking that is used in the initial draw. The intention is that the better competitors do are less likely to meet each other in the early rounds.

Down
1. Carpaccio, e.g. : RAW MEAT
Carpaccio can be meat or fish. It is sliced very thinly, or may be pounded until it is thin, and then served raw. Carpaccio is a relatively contemporary dish, first served in 1950 to a countess in Venice, Italy. The lady informed the restaurant owner that her doctor had advised her to eat only raw meat, so she was served thin slices of uncooked beef in a mustard sauce. The owner of the restaurant thought that the colors of the dish reminded him of paintings by Vittore Carpaccio, so he gave it the name “Carpaccio”. So the story goes anyway …

5. Georges : ONES
I guess “George” is slang for a one-dollar bill.

The nation’s first president, George Washington, is on the US one-dollar bills produced today. However, when the first one-dollar bill was issued in 1863, it featured a portrait of Salmon P. Chase, President Abraham Lincoln’s Secretary of the Treasury.

6. Game with an official called a stickman : CRAPS
If one considers earlier versions of craps, then the game has been around for a very long time and probably dates back to the Crusades. It may have been derived from an old English game called “hazard” also played with two dice, which was mentioned in Geoffrey Chaucer’s “Canterbury Tales” from the 1300s. The American version of the game came here courtesy of the French and first set root in New Orleans where it was given the name “crapaud”, a French word meaning “toad”.

12. Yoga class directive : INHALE
In the West we tend to think of yoga as a physical discipline, a means of exercise that uses specific poses to stretch and strengthen muscles. While it is true that the ancient Indian practice of yoga does involve such physical discipline, the corporeal aspect of the practice plays a relatively small part in the whole philosophy. Other major components are meditation, ethical behavior, breathing and contemplation.

13. Like bananas in banana splits : PEELED
The banana split was created in Latrobe, Pennsylvania in 1904. This particular sundae was the idea of David Stickler, a young apprentice pharmacist at the Tassel Pharmacy’s soda fountain.

22. Cockamamie : HAREBRAINED
“Cockamamy” (sometimes “cockamamie”) is a slang term meaning “ridiculous, incredible”. The term goes back at least to 1946, but may have originated as a slang term used by children in New York City in 1920s.

31. Topper for Chaplin’s Tramp : DERBY
I think a bowler hat is usually called a derby here in the US. The bowler was first produced in 1849 in London by hatmakers Thomas and William Bowler, hence the name. The alternative name of “derby” comes from the tradition of wearing bowler hats at the Derby horse race (a major race held annually in England).

38. Bond seen in “Wayne’s World” : BROMANCE
“Bromance” is the name given these days to a close relationship between two straight males.

“Wayne’s World” was originally a Saturday Night Live sketch starring Mike Myers (as Wayne Campbell) and Dana Carvey as Garth Algar. The sketch was so successful that it was parlayed into two hit movies, released in 1992 and 1993. Not my cup of tea though …

40. Obviously Catholic person, in a snarky rhetorical question : THE POPE
That question would be, “Is the pope Catholic?”

43. Manure byproduct : BIOGAS
Biogas is mixture of methane and carbon dioxide resulting from the breakdown of organic matter by anaerobic bacteria. Biogas is used as a renewable energy source, as it is produced from recycled waste.

44. Coulomb per second : AMPERE
The unit of electric current is the ampere, abbreviated correctly to “A” rather than “amp”. It is named after French physicist André-Marie Ampère, one of the main scientists responsible for the discovery of electromagnetism.