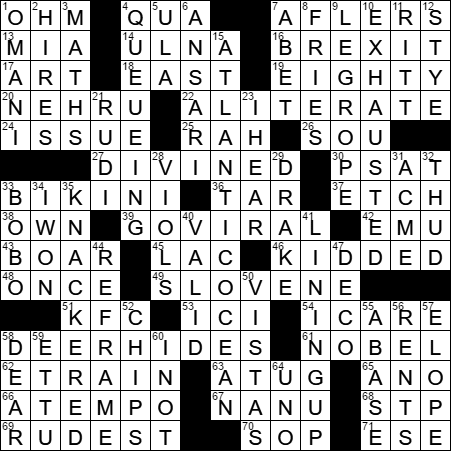 Today’s Wiki-est, Amazonian Googlies
Across
1. Bit of resistance : OHM
The unit of electrical resistance is the ohm (with the symbol omega) named after German physicist Georg Simon Ohm. Ohm was the guy who established experimentally that the amount of current flowing through a circuit is directly proportional to the voltage applied, (V=IR) a relationship that every schoolkid knows as Ohm’s Law.

7. Pats, e.g., before 1970 : AFLERS
The New England Patriots football team was founded in 1959 as the Boston Patriots. The “Patriots” name was selected from suggestions made by football fans in Boston. The team played at several different stadiums in the Boston area for just over ten years, before moving to their current home base in Foxborough, Massachusetts. At the time of the move, the “Boston” name was dropped and changed to “New England”.

13. Nowhere to be found, informally : MIA
Missing in action (MIA)

16. Subject of a notable 2016 referendum : BREXIT
The UK held a referendum in June 2016 in which 52% of voters chose to leave the European Union (EU). The term “Brexit” was used for vote, a portmanteau of “Britain” and “exit”. The vote has led to some debate about the future of the UK. The Scottish electorate voted for the UK to stay in the EU, and so there’s a lot of new talk about Scotland leaving the UK. There’s also some discussion about Northern Ireland’s future in the UK, as the Northern Irish electorate also voted to stay in the EU.

17. “The only serious thing in the world,” per Oscar Wilde : ART
When Oscar Wilde was at the height of his success, he had the Marquess of Queensberry prosecuted for libel. Wilde claimed that Queensberry had left a note at his club with a note that accused the former of sodomy. Queensberry was exonerated during the trial, and Wilde dropped the charges. But the damage was done. Evidence revealed during the trial led to Wilde’s immediate arrest on charges of sodomy. He was convicted and served two years in jail.

18. Manhattan’s ___ Village : EAST
The East Village is a neighborhood of Manhattan lying between Broadway and the East River, extending from 14th Street in the northeast to Houston Street in the southwest. The area was known simply as the northern part of the Lower East Side until the 1960s, when the moniker “East Village” was applied in an effort to distinguish it from the Lower East Side and its less desirable reputation. The name chosen leveraged the established image of the neighboring Greenwich Village as Manhattan’s Bohemian capital.

19. Mercury, on the periodic table : EIGHTY
Mercury is the only metallic element that is a liquid at room temperature. Mercury used to known as “hydrargyrum”, from the Greek “hydr-” meaning “water” and “argyros” meaning “silver”. As a result, Mercury’s modern chemical symbol is “Hg” (for “Hydrargyrum”).

20. Biography subtitled “The Invention of India” : NEHRU
Jawaharlal Nehru was the very first prime minister of India, serving from 1947-64. Nehru was basically the heir to his mentor Mahatma Gandhi. Nehru’s only daughter, Indira, also became prime minister (known as Indira Gandhi, though she was no relation to Mahatma).

26. Trifling amount : SOU
A sou is an old French coin. We use the term “sou” to mean “an almost worthless amount”.

33. It has a top and a bottom with nothing in between : BIKINI
The origin of the word “bikini”, a type of bathing suit, seems very uncertain. My favorite story is that it is named after the Bikini Atoll, site of American A-bomb tests in the forties and fifties. The name “bikini” was chosen for the swim-wear because of the “explosive” effect it had on men who saw a woman wearing the garment!

42. Bird whose wings are used as stabilizers, not for flying : EMU
The large flightless birds called emus make sounds by manipulating inflatable necks sacs. The sac is about a foot long, has a thin wall and allows the bird to emit a booming sound. The type of sound emitted is the easiest way to differentiate between male and female emus.

49. Ljubljana resident : SLOVENE
Ljubljana is the capital of Slovenia, a status the city was awarded on the creation of the Republic in 1991 following the breakup of Yugoslavia.

The Republic of Slovenia is a country in Central Europe, bordered by Italy, Austria, Croatia and Hungary. Given its geographic location, the country has been part of various realms over the centuries, most recently being part of Yugoslavia. Slovenia declared independence from former Yugoslavia in 1991, and is now a member of the European Union.

51. Fast-food inits. : KFC
The famous “Colonel” of Kentucky Fried Chicken (KFC) fame was Harland Sanders, an entrepreneur from Henryville, Indiana. Although not really a “Colonel”, Sanders did indeed serve in the military. He enlisted in the Army as a private in 1906 at the age of 16, lying about his age. He spent the whole of his time in the Army as a soldier in Cuba. It was much later, in the 1930s, that Sanders went into the restaurant business making his specialty deep-fried chicken. By 1935 his reputation as a “character” had grown, so much so that Governor Ruby Laffoon of Kentucky gave Sanders the honorary title of “Kentucky Colonel”. Later in the fifties, Sanders developed his trademark look with the white suit, string tie, mustache and goatee. When Sanders was 65 however, his business failed and in stepped Dave Thomas, the founder of Wendy’s. Thomas simplified the Sanders menu, cutting it back from over a hundred items to just fried chicken and salads. That was enough to launch KFC into the fast food business. Sanders sold the US franchise in 1964 for just $2 million and moved to Canada to grow KFC north of the border. He died in 1980 and is buried in Louisville, Kentucky. The Colonel’s secret recipe of 11 herbs and spices is indeed a trade secret. Apparently there is only one copy of the recipe, a handwritten piece of paper, written in pencil and signed by Colonel Sanders. Since 2009, the piece of paper has been locked in a computerized vault surrounded with motion detectors and security cameras.

53. “Vous êtes ___” : ICI
“Vous êtes ici” are important words to know when navigating your way around Paris. They mean “You are here”, and you’ll often see them on maps in the street.

61. 1953 prize for Churchill : NOBEL
Winston Churchill found time in his busy life to write many, many books. For his efforts, he was awarded the Nobel Prize in Literature in 1953. Although the quality of his historical and biographical works were cited in awarding the prize, quite rightly the citation also included the words “as well as for brilliant oratory in defending human values”. That man could write and deliver a speech …

66. At original speed, musically : A TEMPO
“A tempo” is a Italian for “in time”. The phrase is used on a musical score to instruct a performer to return to the main tempo of the piece, perhaps after slowing down or speeding up.

67. When repeated, Mork’s sign-off : NANU
The sitcom “Mork & Mindy” was broadcast from 1978 to 1982. We were first introduced to Mork (played by Robin Williams) in a special episode of “Happy Days”. The particular episode in question has a bizarre storyline culminating in Fonzie and Mork having a thumb-to-finger duel. Eventually Richie wakes up in bed, and alien Mork was just part of a dream! Oh, and “Nanu Nanu” means both “hello” and “goodbye” back on the planet Ork. “I am Mork from Ork, Nanu Nanu”. Great stuff …

71. Oxford-to-London dir. : ESE
The city of Oxford is in southeastern England, and is most famous as the home of the University of Oxford, the oldest university in the English-speaking world.

Down
1. Neighbor of a Yemeni : OMANI
Oman lies on the southeast coast of the Arabian Peninsula and is neighbored by the OAE, Saudi Arabia and Yemen. Oman is a monarchy, and the official name of the state is the Sultanate of Oman. All of the country’s legislative, executive and judiciary power resides with the hereditary sultan.

6. Comedian Aziz : ANSARI
Aziz Ansari is an actor and comedian from Columbia, South Carolina who is best known for playing Tom Haverford on the sitcom “Parks and Recreation”. Ansari also stars in the Netflix comedy-drama series “Master of None”.

8. 52-Down, across the 15-Down : FRIES
“French fries” are called “chips” back in the British Isles where I grew up. In France, they’re called “pommes frites” (meaning “fried potatoes”).

11. Film director Martin : RITT
Martin Ritt is best remembered as a television and movie director. During the bad old days of the “Red Scare”, Ritt was working in television until he found himself on a blacklist for supposed support of Communist causes. He turned to the theater for work until the Red Scare had run its course, and then moved into the world of film. Some of his best known movies are “Hud”, “The Great White Hope” and “Norma Rae”.

15. “Pond” : ATLANTIC OCEAN
The Atlantic Ocean has been referred to as “the pond” for quite a long time. The expression dates back to the 1640s.

21. Designer Gernreich : RUDI
Rudi Gernreich was a fashion designer, born in Austria. Gernreich fled Austria due to Nazi influence, and ended up in Los Angeles. He is noted for design of the monokini, the first topless swimsuit.

28. Early strings : VIOLS
The viola da gamba (also called simply “viol”) is a bass instrument in what is known as the viol family, with a tonal range that about matches that of the modern-day cello. It is the second largest of all the viols, so is played resting on the floor between the legs. In fact, “viola da gamba” is Italian translating into “viol for the leg”.

40. Bona fide : VALID
“Bona fide(s)” translates from the Latin as “in good faith”, and is used to indicate honest intentions. It can also mean that something is authentic, like a piece of art that is represented in good faith as being genuine.

47. Like the BBC’s headquarters, architecturally : DECO
The marvelous British Broadcasting Corporation (BBC) is mainly funded by the UK government through a television licence fee that is levied annually on all households watching TV transmissions. Currently the fee is 145 UK pounds, about 230 US dollars.

59. Caesarean rebuke : ET TU
It was Shakespeare who popularized the words “Et tu, Brute?” (And you, Brutus?), in his play “Julius Caesar”, although the phrase had been around long before he penned his drama. It’s not known what Julius Caesar actually said in real life just before he was assassinated on the steps of the Senate in Rome.

60. Past the regulation period, informally : IN OT
In overtime (in OT)