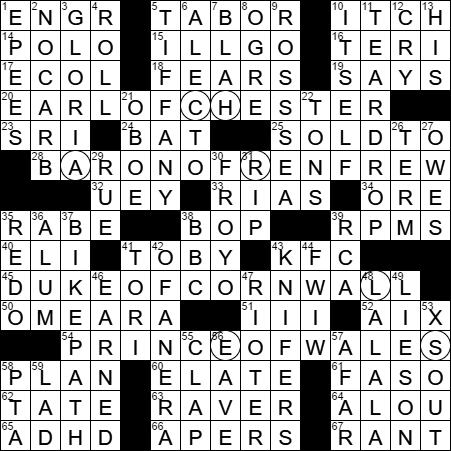 Today’s Wiki-est, Amazonian Googlies
Across
1. Many a SpaceX worker: Abbr. : ENGR
SpaceX (Space Exploration Technologies Corporation) is a space transportation company that was founded in 2002 by Elon Musk, veteran of PayPal and Tesla Motors. In 2012, SpaceX became the first private concern to send a spacecraft to the International Space Station. Apparently, SpaceX is the lowest-price player in the game.

5. Small drum : TABOR
A tabor is a portable snare drum that is played with one hand. The tabor is usually suspended by a strap from one arm, with the other hand free to beat the drum. It is often played as an accompaniment for a fife or other small flutes. The word “tabor” comes from “tabwrdd”, the Welsh word for “drum”.

16. With 14-Across, “Meet the Parents” co-star : TERI …
(14A. See 16-Across : … POLO)
Teri Polo’s most prominent role on the big screen was Pam Focker in “Meet the Fockers” and its sequel. Pam is the wife of the character played by Ben Stiller. Polo also played the wife of Presidential candidate Matt Santos in “The West Wing”.

23. Foreign title of address : SRI
“Sri” is a title of respect for a male in India.

35. Broccoli ___ : RABE
Broccoli Rabe is perhaps better known as rapini, and is a vegetable often used in Mediterranean cuisines. It is quite delicious sauteed with garlic …

40. Crimson rival : ELI
Elihu Yale was a wealthy merchant born in Boston in 1649. Yale worked for the British East India Company, and for many years served as governor of a settlement at Madras (now Chennai) in India. After India, Yale took over his father’s estate near Wrexham in Wales. It was while resident in Wrexham that Yale responded to a request for financial support for the Collegiate School of Connecticut in 1701. He sent the school a donation, which was used to erect a new building in New Haven that was named “Yale” in his honor. In 1718, the whole school was renamed to “Yale College”. To this day, students of Yale are nicknamed “Elis”, again honoring Elihu.

Not only is crimson the school color, “Harvard Crimson” is the name given to the athletic teams, and to the school newspaper. The school color was chosen by a vote of the student body in 1875.

43. Colonel’s chain : KFC
The famous “Colonel” of Kentucky Fried Chicken (KFC) fame was Harland Sanders, an entrepreneur from Henryville, Indiana. Although not really a “Colonel”, Sanders did indeed serve in the military. He enlisted in the Army as a private in 1906 at the age of 16, lying about his age. He spent the whole of his time in the Army as a soldier in Cuba. It was much later, in the 1930s, that Sanders went into the restaurant business making his specialty deep-fried chicken. By 1935 his reputation as a “character” had grown, so much so that Governor Ruby Laffoon of Kentucky gave Sanders the honorary title of “Kentucky Colonel”. Later in the fifties, Sanders developed his trademark look with the white suit, string tie, mustache and goatee. When Sanders was 65 however, his business failed and in stepped Dave Thomas, the founder of Wendy’s. Thomas simplified the Sanders menu, cutting it back from over a hundred items to just fried chicken and salads. That was enough to launch KFC into the fast food business. Sanders sold the US franchise in 1964 for just $2 million and moved to Canada to grow KFC north of the border. He died in 1980 and is buried in Louisville, Kentucky. The Colonel’s secret recipe of 11 herbs and spices is indeed a trade secret. Apparently there is only one copy of the recipe, a handwritten piece of paper, written in pencil and signed by Colonel Sanders. Since 2009, the piece of paper has been locked in a computerized vault surrounded with motion detectors and security cameras.

50. 1998 Masters champion Mark : O’MEARA
Mark O’Meara is an American golfer from Goldsboro, North Carolina. He is known as one of the American players who competes in international tournaments more than most, and has a reputation as a real gentleman all around the world.

52. ___-en-Provence : AIX
Aix-en-Provence is a beautiful city in the South of France, located just 30 miles north of Marseille. I had the remarkable privilege of living in Aix for two years, definitely two of the happiest years for our family …

54. Another title for this puzzle’s subject : PRINCE OF WALES
The tradition in the UK is to invest the heir-apparent to the throne with the title of Prince of Wales. Since Prince Charles is that heir today, he is called Prince of Wales and his first wife was known as Diana, Princess of Wales. Both of their children also use the title, Prince William of Wales and Prince Henry of Wales. That said, ever since Prince William’s marriage, he mainly uses the title Duke of Cambridge.

61. Burkina ___ (African land) : FASO
Burkina Faso is an inland country in western Africa. The country used to be called the Republic of Upper Volta and was renamed in 1984 to Burkina Faso meaning “the land of upright people”.

62. English poet laureate Nahum : TATE
Nahum Tate was an Irish poet who became England’s poet laureate in 1692. An Irishman he may have been, but Tate had to flee his native land after passing on information to the British government about the Irish Rebellion of 1641.

63. Many a techno concert attendee : RAVER
Techno is a type of electronic dance music that originated in Detroit in the eighties. Techno involves a heavy beat in common time, and what seems to be a lot of repetition. Not for me …

64. Baseball’s Felipe : ALOU
Felipe Alou is a former professional baseball player and manager. Alou managed the Montreal Expos from 1992 to 2001, and the San Francisco Giants from 2003 to 2006. Alou was born and raised in the Dominican Republic and came to the US to play for the Giants in 1955. Felipe’s brothers Matty and Jesús followed him to the US, and into Major League baseball.

67. Many a one-star Yelp review : RANT
yelp.com is a website that provides a local business directory and reviews of services. The site is sort of like Yellow Pages on steroids, and the term “yelp” is derived from “yel-low p-ages”.

Down
1. Relatives of sabers : EPEES
The sword known as an épée has a three-sided blade. The épée is similar to a foil and sabre, both of which are also thrusting weapons. However, the foil and saber have rectangular cross-sections.

3. Stepmom of Mitchell and Claire on “Modern Family” : GLORIA
“Modern Family” is a marvelous television show shown on ABC since 2009. The show’s format is that of a “mockumentary”, with the cast often addressing the camera directly. In that respect “Modern Family” resembles two other excellent shows: “The Office” and “Parks and Recreation”, both of which might also be described a “mockumentaries”.

4. Sushi plate item : ROLL
Sushi is a Japanese dish that has as its primary ingredient cooked, vinegared rice. The rice is usually topped with something, most often fish, and can be served in seaweed rolls. If you want raw fish by itself, then you have to order “sashimi”.

6. One of the Furies : ALECTO
The Furies of Greek and Roman mythology were the female personification of vengeance. They were also known as the Dirae, “the terrible”. There were at least three Furies:

8. Grendel in “Beowulf,” e.g. : OGRE
“Beowulf” is an old epic poem from England, although the story is set in Scandinavia. Beowulf fights a battle, defending the Danish King Hrothgar from the ferocious outcast Grendel. Hrothgar had built a great hall for his people in which they could celebrate; singing, dancing and drinking lots of mead. Grendel was angered by the carousing and attacked the hall, devouring many of the incumbent warriors as they slept. A bit of an extreme reaction to noisy neighbors I’d say …

9. Antarctic waters : ROSS SEA
The Ross Sea is a bay in the Southern Ocean of Antarctica. It was discovered by one James Ross in 1841. A more recent discovery, in the waters of the Ross Sea, was a 33 feet long giant squid that was captured in 2007.

26. Semester, e.g. : TERM
“Semester” is a German word from the Latin “semestris”, an adjective meaning “of six months”. We use the term in a system that divides an academic year into two roughly equal parts. A trimester system has three parts, and a quarter system has four.

27. Has a mortgage, say : OWES
Our word “mortgage” comes from the Old French “mort gaige” which translated as “dead pledge”. Such an arrangement was so called because the “pledge” to repay “dies” when the debt is cleared.

36. Many a college interviewer, in brief : ALUM
An “alumnus” (plural … alumni) is a graduate or former student of a school or college. The female form is “alumna” (plural … alumnae). The term comes into English from Latin, in which alumnus means foster-son or pupil. “Alum” is an informal term used for either an alumna or an alumnus.

38. “Sherlock” airer : BBC
If you’ve seen the American television show “Elementary”, you will know that it is an adaptation of the classic tales by Sir Arthur Conan Doyle that are set in the present day. “Elementary” is similar in look and feel to the excellent BBC series “Sherlock”, which stars Benedict Cumberbatch as a modern-day Holmes. We can pick up “Sherlock” in some parts of the country as part of “Masterpiece Mystery” on PBS.

39. Record label for Miley Cyrus and Pitbull : RCA
Miley Cyrus became famous playing the Disney Channel character “Hannah Montana”. Miley is the daughter of country singer Billy Ray Cyrus. When she was born, Billy Ray and his wife named their daughter “Destiny Hope”, but soon they themselves calling her “Smiley” as she was always smiling as a baby, and this got shortened to Miley over time. Cute …

Pitbull is the stage name of Cuban-American rap artist Armando Perez. Pitbull is from Miami and was born to Cuban immigrants.