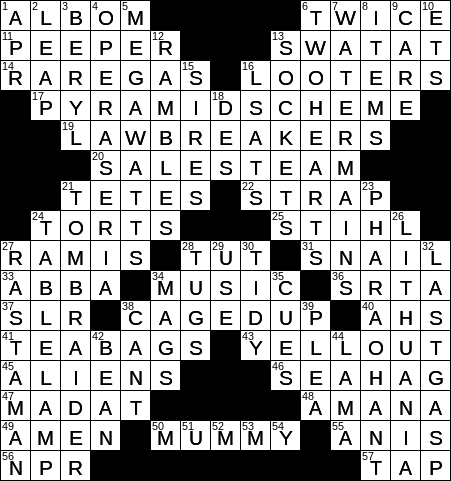 CROSSWORD SETTER: Timothy Polin & Joe Krozel
THEME: Mummy
We have some grid art today, with black squares giving us a pyramid. We are given hints with some themed answer referring to all sorts of things Egyptian. The main problem in the grid is to work out what 5-letter word fits in the pyramid. Note that I solve the puzzle online, and the numbering of today’s online clues are “off”. The print version of the puzzle has the numbers 5 | 29 | 47 | 34 | 43 in these 5 squares. So, we look for other squares in the grid with the same numbers. Taking the letters in those other squares leads us to spell out the word M | U | M | M | Y :

11. Tree frog with a distinctive call : PEEPER
The spring peeper is a small frog that is native to North America. The frog gets its name from the sound that it makes, a chirping call.

14. Krypton, for one : RARE GAS
The noble gases (also “rare gases”) are those elements over on the extreme right of the Periodic Table. Because of their “full” complement of electrons, noble gases are very unreactive. The six noble gases that occur naturally are helium, neon, argon, krypton, xenon and radon.

17. Common scam : PYRAMID SCHEME
A pyramid scheme is a type of business that involves the energetic recruitment of others into the scheme. New members typically make a payment of some sort to join, and are pressured to recruit their own circle of new, paying recruits. Shares of the recruitment payment proceed up the chain so that those in the higher echelons can make a lot of money. The scheme breaks down as more and more members find themselves competing for fewer and fewer potential recruits.

24. Class for a one-L : TORTS
The word “tort” is a French word meaning “mischief, injury or wrong”. Tort law is generally about negligence, when the action of one party causes injury to another but that action falls outside of the scope of criminal law.

“One L” is a name used in general for first year law students, especially those attending Harvard..

25. Big name in chain saws : STIHL
Stihl is a manufacturer of power tools mainly used in landscaping and forestry. The company headquarters is located not far from Stuttgart in Germany. Stihl was founded in 1926 by Andreas Stihl, and first manufactured chainsaws.

27. Harold who directed “Groundhog Day” : RAMIS
Harold Ramis was a real all-rounder, working as an actor, director and writer. Indeed, in both “Ghostbusters” and “Stripes” he was a co-writer as well as playing a lead character. Ramis worked as writer-director on “Caddyshack”, “National Lampoon’s Vacation”, “Groundhog Day” and “Analyze This”.

28. King of the 18th dynasty : TUT
King Tut is a name commonly used for the Egyptian pharaoh Tutankhamen. Tutankhamen may not have been the most significant of the pharaohs historically, but he is the most famous today largely because of the discovery of his nearly intact tomb in 1922 by Howard Carter. Prior to this find, any Egyptian tombs uncovered by archaeologists had been ravaged by grave robbers. Tutankhamen’s magnificent burial mask is one of the most recognizable of all Egyptian artifacts.

33. Bishop’s title in the Coptic Church : ABBA
The Copts make up the largest minority religious group in Egypt. Copts are Christians, with most adhered to the Coptic Orthodox Church of Alexandria, and others practicing Coptic Catholicism or Coptic Protestantism. The term “Copt” ultimately derives from a Greek word for Egyptian.

34. “The only sensual pleasure without vice,” per Samuel Johnson : MUSIC
Samuel Johnson (also known as Dr. Johnson) was a British author active in the 1700s. Johnson is famous for producing a “Dictionary of the English Language” published in 1755. Johnson’s dictionary was the standard used until the OED was published 150 years later. As a creative writer, Johnson wrote one play, called “Irene”, a work that he believed to have been his worst, and the critics apparently agreed.

37. Camera variety, briefly : SLR
SLR stands for “single lens reflex”. Usually cameras with changeable lenses are the SLR type. The main feature of an SLR is that a mirror reflects the image seen through the lens out through the viewfinder, so that the photographer sees exactly what the lens sees. The mirror moves out of the way as the picture is taken, and the image that comes through the lens falls onto unexposed film, or nowadays onto a digital sensor.

45. One of the eggs used in this 1986 film is now exhibited at the Smithsonian : ALIENS
“Aliens” is a 1986 sequel to the very successful science-fiction movie “Alien” released in 1979. “Aliens” was filmed at Pinewood Studios in England, and at the decommissioned Acton Lane Power Station in London. The film was directed by James Cameron, and starred Sigourney Weaver reprising her role as Ellen Ripley from “Alien”.

46. “Popeye” villain who sailed the Black Barnacle : SEA HAG
The Sea Hag is Popeye’s archenemy, sailing the seas with her pet vulture Bernard on her boat called “The Black Barnacle”.

48. Whirlpool subsidiary : AMANA
The Amana Corporation takes its name from the location of its original headquarters, in Middle Amana, Iowa. Today, the Amana name is very much associated with household appliances. The company was founded in 1934 to manufacture commercial walk-in coolers.

49. Comment to a brother or sister : AMEN
The word “amen” translates as “so be it”. “Amen” is said to be of Hebrew origin, but it is likely to be also influenced by Aramaic and Arabic.

50. : MUMMY
We use the term “mummy” for a dead body that has been embalmed in preparation for burial, especially if done so by the ancient Egyptians. The term “mummy” comes from the Persian word “mumiyah” meaning “embalmed body”.

51. Black birds : ANIS
The tropical bird called the ani is related to the cuckoo, although anis don’t go around robbing other birds nest as do the cuckoos.

52. Longtime home of the Tappet Brothers : NPR
“Car Talk” is a very entertaining radio show aired on NPR at weekends. The show is hosted by brothers Tom and Ray Magliozzi (aka “Click and Clack, the Tappet Brothers”). The hosts spend most of their airtime giving advice on automotive repair, and do a lot of kidding around as well. Click and Clack retired in 2012, so today’s broadcasts are repeats. Tom Magliozzi passed away in 2014.

Down
3. Color akin to turquoise : BERYL
The mineral beryl is a source of a number of different, semi-precious stones, depending on the nature of the impurities present. Pure beryl is colorless; blue beryl is called aquamarine, and green beryl is emerald. The source of the green color is mainly chromium.

4. Work not of the buffa style : OPERA SERIA
The Italian term “opera seria” translates as “serious” opera, as opposed to “opera buffa”, which we call “comic” opera.

21. Video game featuring an archaeologist heroine : TOMB RAIDER
Lara Croft was introduced to the world as the main character in a pretty cool video game (I thought, back then) called “Tomb Raider” in 1996. Lara Croft moved to the big screen in 2001 and 2003, in two pretty awful movie adaptations of the game’s storyline. Angelina Jolie played Croft, and she did a very energetic job.

23. Insect with multi-queen colonies : PHARAOH ANT
The now-ubiquitous pharaoh ant is a tropical species that thrives indoors all over the world. They are especially troublesome in hospitals where they can even access wounds due to their tiny size.

26. Eurozone member beginning in 2015 : LITHUANIA
The nation of Lithuania is a former Soviet Socialist Republic (SSR) sitting on the Baltic Sea in Northern Europe. The capital of Lithuania is Vilnius, and 16 miles north of Vilnius is a point that is officially recognized as the Geographic Center of Europe.

The “eurozone” or “euro area” is a monetary and economic union within the European Union that uses the euro as a shared legal tender and sole currency.

27. Dreaded guy? : RASTAMAN
Dreadlocks are matted coils of hair nowadays usually formed intentionally, although if one lets hair grow out without grooming then it naturally forms twisted and matted dreadlocks. The hairstyle is associated with the Rastafarian movement in which “dread” is a very positive term meaning “fear of the Lord”.

34. Hot rod wheels : MAGS
Mag wheels are often used on racing cars. They are made from a magnesium alloy, giving them their name. But beware, they are flammable and have been banned in many motor-sports in the UK.

38. Jargon : CANT
“Cant” is insincere language, or the language associated with a particularly group. Back in the 1600s, the term described the whining of beggars.