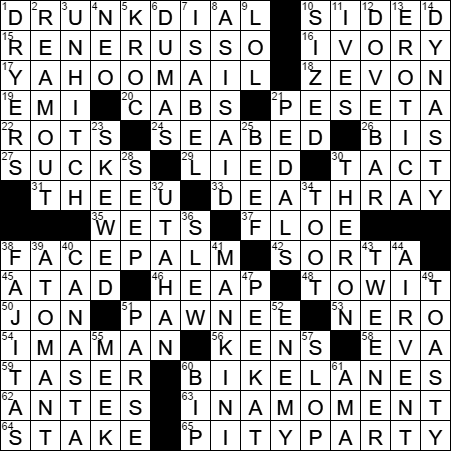 Today’s Wiki-est, Amazonian Googlies
Across
15. She played Odin’s wife in “Thor” : RENE RUSSO
The lovely and very talented actress Rene Russo is a native of Burbank, California. Russo went to highschool (with actor/director Ron Howard), but dropped out in tenth grade. At seventeen, she was given the opportunity to train as a model and within a very short time appeared on the cover of “Vogue”. As her modelling jobs slowed down in her early thirties, Russo made a career change and studied theater and acting. I am so glad she did, as Rene Russo is one of my favorite actresses …

16. Key ingredient? : IVORY
The traditional materials used for the manufacture of piano keys were ebony (black) and ivory (white). Ebony is still used, but this is now covered with plastic instead of ivory to make the white keys.

18. Warren with the 1978 platinum album “Excitable Boy” : ZEVON
Warren Zevon was a rock singer and musician from Chicago, Illinois. Zevon was a frequent guest on the “Late Show with David Letterman”, sometimes filling in for Paul Shaffer as bandleader. In 2002, Zevon was diagnosed with cancer and given only a few months to live. Zevon was invited onto the “Letterman Show” in October 2002 to appear as a guest for the whole hour. He discussed his illness on-air, and offered his insight on dying: “Enjoy every sandwich”. Zevon lived longer than expected, but passed away in September 2003.

19. Onetime label for the Beatles : EMI
EMI was a British music company, with the abbreviation standing for Electric and Musical Industries.

21. Pre-euro money : PESETA
The peseta is the former currency of Spain, replaced by the euro in 2002.

26. Arm muscles, in bodybuilding lingo : BIS
The biceps muscle is made up of two bundles of muscle, both of which terminate at the same point near the elbow. The heads of the bundles terminate at different points on the scapula or shoulder blade. “Biceps” is Latin for “two-headed”.

27. “Your Movie ___” (Roger Ebert book) : SUCKS
“Your Movie Sucks” is a collection of movie reviews by film critic Roger Ebert, reviews that are all under two-out-of-five stars.

31. What’s exited in Brexit : THE EU
The UK held a referendum in June 2016 in which 52% of voters chose to leave the European Union (EU). The term “Brexit” was used for vote, a portmanteau of “Britain” and “exit”. The vote has led to some debate about the future of the UK. The Scottish electorate voted for the UK to stay in the EU, and so there’s a lot of new talk about Scotland leaving the UK. There’s also some discussion about Northern Ireland’s future in the UK, as the Northern Irish electorate also voted to stay in the EU.

37. Penguin’s perch : FLOE
An ice floe is a sheet of ice that has separated from an ice field and is floating freely on the ocean.

Penguins are flightless aquatic birds found only in the Southern Hemisphere, mainly in Antarctica.

50. Ned’s adoptive son on “Game of Thrones” : JON
Ned Stark is the protagonist in George R. R. Martin’s fantasy novel “A Game of Thrones”, although his character doesn’t exactly come out on top by the end of the story. Stark is played by actor Sean Bean in the HBO television adaptation of the novel.

53. Roman-Parthian War figure : NERO
Nero was Emperor of Rome from 54 to 68 CE, and he had quite the family life. When he was just 16-years-old Nero married his step-sister Claudia Octavia. He also had his mother and step-brother executed.

The Yardbirds are a rock band that was very big in the sixties. They disbanded in 1968, but reformed in 1992 and are still going strong today. One of the groups most famous hits was “For Your Love”, and playing on the original recording of that song was band member Eric Clapton. Clapton left the Yardbirds soon afterwards, having gained his initial foothold in the world of rock music.

56. Salad dressing brand : KEN’S
The food manufacturing company called Ken’s Foods is known for its salad dressings. As well as selling its own products, it is Ken’s Foods that manufactures the Newman’s Own brand under contract.

58. Juan Perón’s second wife : EVA
Eva Perón was the second wife of President Juan Perón who was in office from 1946 to 1955. The Argentine First Lady was known affectionately by the people as “Evita”, the Spanish language diminutive of “Eva”. “Evita” was also the follow-up musical to “Jesus Christ Superstar” for Andrew Lloyd Webber and Tim Rice, and was based on the life of Eva Perón.

59. Real shocker : TASER
Victor Appleton wrote a novel for young adults called “Tom Swift and His Electric Rifle”. The company that developed the TASER electroshock weapon partly named its product as a homage to the novel. The acronym “TASER” stands for “Thomas A. Swift’s Electric Rifle”.

Down
2. Tear into : REAM OUT
I must admit that I find the slang term “to ream out”, with its meaning “to scold harshly”, to be quite distasteful. The usage of the word as a reprimand dates back to about 1950.

4. Lead-in to Luddite : NEO-
In contemporary usage, a “Luddite” is someone who is slow to adopt new technology. This usage has even been extended to “Neo-Luddism”, meaning the active opposition to some technologies. It has been suggested that the term “Luddism” commemorates a youth called Ned Ludd, who smashed two mechanical knitting machines in 1779, in the belief that they represented automation that took away jobs. In the following decades, Luddism became an active movement, with Luddites going on rampages, smashing equipment that was deemed to create unemployment.

5. Fast-food empire builder : KROC
The original McDonald’s restaurant was opened in 1940 by Richard and Maurice McDonald as a barbecue restaurant. The brothers then moved into fast food hamburgers, eventually selling out to one of their franchise agents, Ray Kroc. It was Ray Kroc who really led the company to its worldwide success. He was played by Michael Keaton in the 2016 movie about Ray Kroc’s business life called “The Founder”.

6. “The Black Tulip” novelist, 1850 : DUMAS
“The Black Tulip” is an 1850 novel by the French author Alexandre Dumas. Part of the novel’s storyline is a competition in the Netherlands among the nation’s best gardeners to grow a black tulip.

7. Juan Perón’s third wife : ISABEL
Nowadays, President Juan Perón of Argentina is perhaps less well-known than his second wife, Eva Perón of “Evita” fame. Juan and Eva Perón were overthrown in a military coup in 1955, although Juan Perón was returned to power in 1973 when he served for only nine months before he passed away. Juan was succeeded in office by his third wife, Isabel Perón.

11. “Riders in the Sky” singer, 1949 : IVES
As well as being an actor, Burl Ives was a folk singer, which was his original calling. In Hollywood he had a distressing experience with the House Unamerican Activities Committee and avoided being blacklisted by cooperating to some level with McCarthy and his team. This cooperation created a rift between him and Pete Seeger in particular, a fellow singer whom he “discussed” with the committee.

12. Something cold from Mars : DOVE BAR
The Dove Bar is an ice cream bar that was distributed locally in Chicago from 1956 until 1985, when Mars purchased the brand and made it available nationally.

25. Grievance : BEEF
A “beef” is a complaint or a grievance. It’s not quite clear how “beef” came to have this meaning, but one suggestion is that derives from the habit of soldiers at the end of the 1800s complaining about the quality or availability of beef in their rations.

30. Best Actress winner for “Monster” : THERON
Charlize Theron is an actress from South Africa who has played leading roles in Hollywood films such as “The Devil’s Advocate”, “The Cider House Rules” and my personal favorite “The Italian Job”.

“Monster” is a pretty disturbing crime drama released in 2003. The film’s storyline is based on the real-life story of Aileen Wuornos (played by Charlize Theron), a serial killer who was eventually caught and executed in 2002.

32. Jazz devotee, most likely : UTAHAN
The Utah Jazz professional basketball team moved to their current home in Salt Lake City in 1979. As one might guess from the name, the team originated in New Orleans, but only played there for five seasons. New Orleans was a tough place to be based because venues were hard to come by, and Mardi Gras forced the team to play on the road for a whole month.

38. Alternatives to chimichangas : FAJITAS
“Fajita” is a Tex-Mex term that refers to grilled meat served on a tortilla. The Mexican term “fajita” is used to describe a small strip of chicken or beef. Nowadays, fajitas are often served on a sizzling platter with the tortillas and condiments on the side.

40. Game in which jokers and twos are wild : CANASTA
The card game called canasta originated in Uruguay apparently, with “canasta” being the Spanish word for “basket”. In the rummy-like game, a meld of seven cards or more is called a canasta.

43. Many a Taylor Swift fan : TWEENER
The term “tween” is now used to describe preadolescence, the years between 8 and 12 years of age.

51. Break down in school : PARSE
The verb “to parse” means “to state the parts of speech in a sentence”. “Parse” comes from the Latin word “pars” meaning “part”.

52. Newman, to Seinfeld : ENEMY
Wayne Knight’s most famous role is Newman in the sitcom “Seinfeld”. Knight also had a small role in a very famous movie scene, playing one of the police officers interrogating Sharon Stone’s character in “Basic Instinct”.

60. Marcel Marceau moniker : BIP
Marcel Marceau was the most famous mime of all time, a native of Strasbourg in France. Marceau made a cameo appearance in Mel Brooks’s “Silent Movie”, playing himself. In the scene, Mel Brooks is asking Marceau to appear in his movie (a question asked silently of course, in subtitles), and Marceau turns to the camera and speaks the only word in the whole film, “Non!” (French for “No!”). The mime speaks! Brilliant …