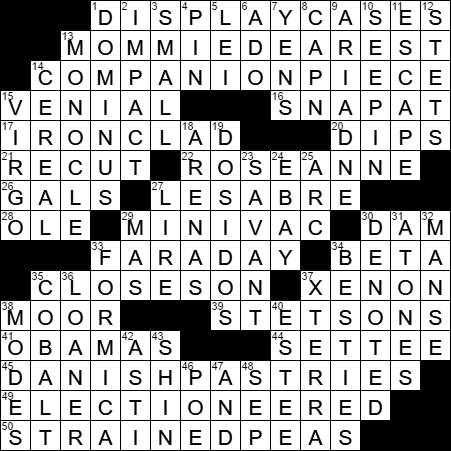 Today’s Wiki-est, Amazonian Googlies
Across
13. Best-selling celebrity tell-all book of 1978 : MOMMIE DEAREST
“Mommie Dearest” is a 1978 memoir written by Christian Crawford, the daughter of actress Joan Crawford. The book did not paint Joan in a good light, with claims of alcoholism and neglect of her four children.

15. Forgivable : VENIAL
In some Christian denominations, sins can be either venial or mortal in terms of severity, with mortal sins being the more grievous.

22. Sitcom set in Lanford, Ill. : ROSEANNE
The comedian Roseanne Barr is perhaps best known as the star of her own sitcom called “Roseanne” in which she played the character Roseanne Conner. In 2012 Barr unsuccessfully vied for the Green Party’s nomination for US President. She didn’t give up though, and was successful in winning the nomination of the Peace and Freedom Party. In the 2012 presidential election she earned over 60,000 votes, and placed sixth in the list of candidates.

27. Final car built in Buick City before its shutdown : LESABRE
The Buick Special was a car produced by General Motors in various forms from 1936, making a final brief appearance in 1975. The Buick Special was given the name “LeSabre” in 1959, and a “Skylark” option was introduced in 1961. The engine was changed from a V8 in 1962, making the Buick Special the first American production car to use a V6.

33. Physicist who formulated the two laws of electrolysis : FARADAY
Michael Faraday was a scientist from England who discovered electromagnetic induction among other things. It was Faraday who first observed that a conductor carrying an electric current has an associated magnetic field. Amazingly, the sum total of Faraday’s formal education was little more than a seven-year apprenticeship as a bookbinder and bookseller.

34. What bugs are found in : BETA
In the world of software development, the first tested issue of a new program is usually called the “alpha” version. Expected to have a lot of bugs that need to be fixed, the alpha release is usually distributed to a small number of testers. After reported bugs have been eliminated, the refined version is called a “beta” and is released to a wider audience, but with the program clearly labeled as “beta”. The users generally check functionality and report further bugs that are encountered. The beta version feeds into a release candidate, the version that is tested just prior to the software being sold into the market, hopefully bug-free.

37. Gas in an ion thruster : XENON
An ion thruster is a type of engine used to propel spacecraft. Orbiting satellites might have several ion thrusters, which are used to maintain orbit and for repositioning. Basically, ion thrusters use power generated by solar panels to force ions out of a nozzle. The mass of the ions creates movement in the required direction using the principle of conservation of momentum.

38. Medieval invader of Spain : MOOR
The most famous Moor in literature has to be Othello, the title character in William Shakespeare’s tragedy “Othello, the Moor of Venice”. The word “Moor” describes various peoples of North Africa, usually of the Muslim faith. At the height of their geographic influence the Moors occupied much of the Iberian peninsula, calling it Al Andalus (from which modern Andalusia gets its name).

39. Tops of the Mounties : STETSONS
Stetson is a brand name of hat, manufactured by the John B. Stetson Company of St. Joseph, Missouri. The so called “cowboy hat” that Stetson pioneered was such a success that the company became the largest hat maker in the world, producing over 3.3 million hats per year.

The Royal Canadian Mounted Police (the Mounties; RCMP) is an unusual police force in that it provides all policing for the whole country. The RCMP works on the national level, and right down to the municipal level. The force’s distinctive uniform of red serge tunic, blue pants with a yellow stripe, stetson hat etc. is known internally as “Review Order”. The red uniform dates back to the days of the North-West Mounted Police, which was one of the existing forces that were merged in 1920 to form the RCMP.

41. Onetime White House family : OBAMAS
By tradition, the Secret Service code names used for the US President and family all start with the same letter. For the current First Family, that letter is R:

44. Parlor fixture : SETTEE
“Settee” is another word for a couch. The term come from the Old English “setl”, which was a long bench with a high back and arms.

45. They’re known as “Viennese bread” in Scandinavia : DANISH PASTRIES
The Danish pastry that we know so well over here in the US is indeed a Danish specialty, although the recipe was brought to Denmark by Austrian bakers. A “Danish” is called “Viennese bread” in Denmark.

Down
5. Plumeria creation : LEI
The genus of plants Plumeria has the common name “Frangipani”. The genus is named after French botanist Charles Plumier. The common name comes from an Italian noble family with roots in Ancient Rome.

7. Wants : YENS
The word “yen”, meaning “urge”, has been around in English since the very early 1900s. It comes from the earlier word “yin” imported from Chinese, which was used in English to describe an intense craving for opium!

9. “Bacchus and ___” (Titian painting) : ARIADNE
“Bacchus and Ariadne” is an oil painting by Italian Renaissance painter Titian that can be seen in the National Gallery in London.

12. Changes back : STETS
“Stet” is a Latin word meaning “let it stand”. In editorial work, the typesetter is instructed to disregard any change previously marked by writing the word “stet” and then underscoring that change with a line of dots or dashes.

14. Post box’s contents : CEREAL
C. W. Post decided to get into the cereal business after visiting the Battle Creek Sanitarium operated by John Harvey Kellogg. Post was interested in the chemistry of digestion and was inspired by the dietary products offered by Kellogg at his sanitarium. The first breakfast cereal Post introduced was Grape-Nuts, way back in 1897.

19. Back-to-back moves : DO-SI-DOS
The term “do-si-do” is actually a corruption of a French phrase “dos-à-dos”, meaning back-to-back. And parenthetically, this is just the opposite to the familiar French term “vis-à-vis”, meaning face-to-face. In the do-si-do dance move, the partners start facing each other and then advance past each other’s right shoulder, and then move to the right without turning so that they are now facing away from each other (back-to-back). They complete the move facing in the same direction, passing each other’s left shoulders by moving backwards until they return to the starting position. Did you get that …?

23. Eminent scholar : SAVANT
A “savant” is a learned person. The term “savant” can also be short for “idiot savant”, the outdated name for someone with a mental disability but who has above-normal capabilities in perhaps calculation or musical expression.

24. Company that bought (and later sold) Skype : EBAY
The main feature of the Skype application is that it allows voice communication to take place over the Internet (aka VoIP). Skype has other features such as video conferencing and instant messaging, but the application made its name from voice communication. Skype was founded by two Scandinavian entrepreneurs and the software necessary was developed by a team of engineers in Estonia. The development project was originally called “Sky peer-to-peer” so the first commercial name for the application was “Skyper”. This had to be shortened to “Skype” because the skyper.com domain name was already in use.

27. Old Roman coins : LIRE
The word “lira” is used in a number of countries for currency. “Lira” comes from the Latin for “pound” and is derived from a British pound sterling, the value of a Troy pound of silver. For example, the lira (plural “lire”) was the official currency of Italy before the country changed over to the euro in 2002.

32. Parson’s residence : MANSE
A manse is a minister’s home in various Christian traditions. “Manse” derives from “mansus”, the Latin for “dwelling”. The term can also be used for any stately residence.

37. Nissan model discontinued in 2015 : XTERRA
The Xterra is a compact SUV built by Nissan in Smyrna, Tennessee (and in Brazil).

40. Name on a bottle of Pleasures perfume : ESTEE
Estée Lauder was a very successful businesswoman, with a reputation as a great salesperson. Lauder introduced her own line of fragrances in 1953, a bath oil called “Youth Dew”. “Youth Dew” was marketed as a perfume, but it was added to bathwater. All of a sudden women were pouring whole bottles of Ms. Lauder’s “perfume” into their baths while using only a drop or two of French perfumes behind their ears. That’s quite a difference in sales volume …

42. City near Turin : ASTI
Asti is a city in the Piedmont region of northwest Italy. The region is perhaps most famous for its Asti Spumante sparkling white wine.

43. Hebrew letter on a dreidel : SHIN
A dreidel is a spinning top with four sides, often associated with the Jewish holiday of Hanukkah. Each of the four sides on a dreidel bears a letter from the Hebrew alphabet (nun, gimel, hei and shin). The four letters are the initials of the Hebrew phrase “Nes Gadol Hayah Sham” meaning “a great miracle happened there”. According to tradition, children would be taught Torah while hiding in caves away from the Greeks. When Greek soldiers approached, the children would hide their torah scrolls and play with their dreidels instead.