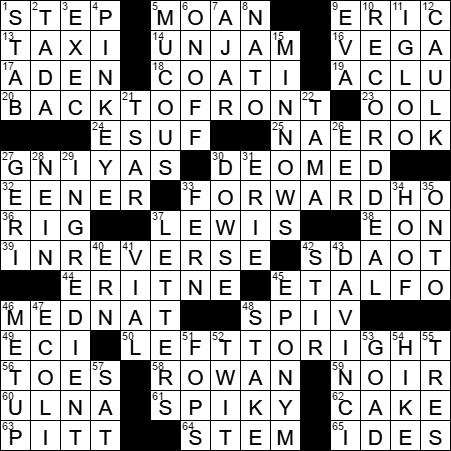 CROSSWORD SETTER: Alex Eaton-Salners
THEME: Left, Right, Left, Right …
Today’s theme only affects the across-answers. We start off at the top of the grid writing in those answers from left to right, as usual. When we hit the answer BACK TO FRONT, we enter the letters of each across-answer in reverse order. That is, until we hit the answer FORWARD HO!, and we go back to normal. After getting to the answer IN REVERSE, we revert to reverse order again. Finally, we get back to normal after reaching the answer LEFT TO RIGHT in the lower part of the grid:

Today’s Wiki-est, Amazonian Googlies
Across
9. Idle laughter source? : ERIC
Eric Idle is one of the founding members of the Monty Python team. Idle was very much the musician of the bunch, and is an accomplished guitarist. If you’ve seen the Monty Python film “The Life of Brian”, you might remember the closing number “Always Look on the Bright Side of Life”. It was sung by Idle, and was indeed written by him. That song made it to number 3 in the UK charts in 1991.

17. British crown colony from 1937 to 1963 : ADEN
Aden is a seaport in Yemen, located on the Gulf of Aden by the eastern approach to the Red Sea. Aden has a long history of British rule, from 1838 until a very messy withdrawal in 1967. A native of Aden is known as an Adeni. Some believe that Cain and Abel are buried in the city.

18. Animal that resembles a raccoon : COATI
A coati is a member of the raccoon family and is also known as the Brazilian aardvark, or the snookum bear. The coati is native to Central and South America, but can also be found in the southwest of the United States.

19. Grp. that promised Trump “We’ll see you in court” : ACLU
The American Civil Liberties Union (ACLU) has its roots in the First World War when it was founded to provide legal advice and support to conscientious objectors. The ACLU’s motto is “Because Freedom Can’t Protect Itself”. The ACLU also hosts a blog on the ACLU.org website called “Speak Freely”.

23. London lav : LOO
It has been suggested that the British term “loo” comes from Waterloo (water-closet … water-loo), but no one seems to know for sure. Another suggestion is that the term comes from the card game of “lanterloo”, in which the pot was called the loo!

25. Language in which “hello” is “annyeonghaseyo” : KOREAN
One say “annyeonghaseyo” in Korean when greeting someone, saying “hello”. The Korean term translates literally as “are you at peace?”

32. Zellweger of “Chicago” : RENEE
Renée Zellweger’s big break came in the 1996 movie “Jerry Maguire”. A few years later, Zellweger followed that up with a string of successes in “Bridget Jones Diary” (2001), “Chicago” (2002) and “Cold Mountain” (2003). My wife and I love watching her play Bridget Jones, and as someone coming from the British Isles, I have to say that Zellweger does a remarkable job with the accent. She worked hard to perfect that accent, and of course she had a voice coach. She also went “undercover” and worked as a temp in an office for three weeks fine-tuning her skills.

37. Boxer Lennox : LEWIS
The boxer Lennox Lewis was born in London, England but moved with his family to Ontario, Canada when he was 12-years-old. He won a gold medal for Canada in the 1988 Summer Olympics in Seoul, and soon after moved back to his native England. In 1993 he was declared WBC heavyweight champion for the first time. In his spare time, Lewis is an avid chess player, and funded an after-school chess program for disadvantaged youths.

58. Mr. Bean portrayer Atkinson : ROWAN
Rowan Atkinson is an English comedian and actor who is most famous for playing the title role in the comedy shows “Mr. Bean” and “Blackadder”. In the world of movies, Atkinson had memorable supporting performances (in my opinion) in the Bond film “Never Say Never Again”, and in the romcoms “Four Weddings and a Funeral” and “Love Actually”. A very talented man …

59. Crime film genre : NOIR
The expression “film noir” has French origins, but only in that it was coined by a French critic in describing a style of Hollywood film. The term, meaning “black film” in French, was first used by Nino Frank in 1946. Film noir often applies to a movie with a melodramatic plot and a private eye or detective at its center. Good examples would be “The Big Sleep” and “D.O.A”.

60. Bone in a wing or arm : ULNA
The humerus is the long bone in the upper arm. The bones in the forearm are the radius and ulna. “Ulna” is the Latin word for “elbow”, and “radius” is Latin for “ray”.

63. William ___, early British P.M. : PITT
William Pitt, the Elder was the Prime Minister of Great Britain from 1766 to 1768. Although a prominent figure in British politics for many years, he refused to accept a title until he took over government of the country. For this refusal, he earned the nickname “The Great Commoner”. It is William Pitt, the Elder who lent his name to the city of Pittsburgh, Pennsylvania.

William Pitt, the Younger was Prime Minister of Britain from 1783 to 1801, and again from 1804 until 1806. When Pitt first took office, he was only 24 years of age, making him the nation’s youngest ever PM. William Pitt is known as “the Younger” as his father, William Pitt the Elder also served as prime minister, from 1766 to 1768.

7. Open a bit : AJAR
Our word “ajar” is thought to come from Scottish dialect, in which “a char” means “slightly open”.

8. Grp. that has added 12 members since the end of the Cold War : NATO
The North Atlantic Treaty Organization (NATO) was founded not long after WWII in 1949 and is headquartered in Brussels, Belgium. The first NATO Secretary General was Lord Ismay, Winston Churchill’s chief military assistant during WWII. Famously, Lord Ismay said the goal of NATO was “to keep the Russians out, the Americans in, and the Germans down.”

9. Mendes of “2 Fast 2 Furious” : EVA
I best know the actress Eva Mendes as the female lead in the movie “Hitch”, playing opposite Will Smith. Mendes was known off the screen for dating actor Ryan Gosling from 2011 to 2013.

12. Leak fixer : CAULK
The term “caulk” comes from old Norman French “cauquer”, and described the action of filling gaps with lime. “Caulk”has the same root as our word “chalk”.

15. Some baitfish : MINNOWS
“Minnow” are small fish often used as bait when fishing. The term is used figuratively to for someone who is comparatively insignificant or perhaps small in stature.

21. Bygone Winter Palace resident : TSAR
The Winter Palace is a magnificent building in St. Petersburg in Russia, home to the Russian tsars (and tsarinas). The Winter Palace houses the famous Hermitage Museum. I was lucky enough to visit the Palace and museum some years ago, and I have to say that I have rarely been more impressed by a historical building.

22. Janowitz who wrote “Slaves of New York” : TAMA
Tama Janowitz is an American writer. Janowitz was born in San Francisco but has lived much of her life in New York City. In New York she hung around with the likes of Andy Warhol and became well known in literary circles. Her most famous work is a collection of short stories called “Slaves of New York”, which was made into a film of the same name in 1989.

27. Spice Girl Halliwell : GERI
Geri Halliwell was nicknamed Ginger Spice when she was with the Spice Girls, because of her red hair. Halliwell was quite a bit older than the rest of the group and so sometimes she was less charitably referred to as “Old Spice”. After launching her solo career, Halliwell released a fabulous 2001 version of the song “It’s Raining Men”, which was originally recorded by the Weather Girls in 1982. Great song …

30. Divine water : DOWSE
Dowsing is the practice of divining for not just water, but also buried metals and gemstones for example. Often a dowser will use a Y-shaped or L-shaped rod as a tool, which can also be called a dowser. Here in the US, the tool used might be referred to as a “witching rod”, as it is usually made from witch-hazel.

31. Port with lots of lake-effect snow : ERIE
Erie is a city in the very north of Pennsylvania, right on the southern shore of Lake Erie. The city takes its name from the Erie Native American tribe that resided in the area. Erie is nicknamed the Gem City, a reference to the “sparkling” Lake Erie.

33. Plant with spores : FERN
Ferns are unlike mosses, in that they have xylem and phloem, making them vascular plants. They also have stems, leaves and roots, but they do not have seeds and flowers, and reproduce using spores. Spores differ from seeds in that they have very little stored food.

43. “Vitruvian Man” artist : DA VINCI
You know that drawing by Leonardo da Vinci, of a man with his arms outstretched, confined in a circle? Well, that drawing is known as the Vitruvian Man. Da Vinci was trying to illustrate the thesis by Roman architect Vitruvius, that pleasing architectural proportions were related to proportions found in the human boy.

45. James Parkinson or Alois Alzheimer : EPONYM
An eponym is a name for something derived from the name of a person, as in the “sandwich”, named for the Earl of Sandwich.

English apothecary surgeon James Parkinson wrote “An Essay on the Shaking Palsy” in 1817. This work was the first to describe the disorder that was later to be called Parkinson’s disease in his honor.

Alzheimer’s disease is a form of dementia, the most common form of the condition. The disease is named for German psychiatrist and neuropathologist Alois Alzheimer, who first described it in 1906.

46. Rendezvoused (with) : MET UP
A rendezvous is a meeting, from the French “rendez vous” meaning “present yourselves”.

47. Cause of some poisoning : E COLI
Escherichia coli (E. coli) are usually harmless bacteria found in the human gut, working away quite happily. However, there are some strains that can produce lethal toxins. These strains can make their way into the food chain from animal fecal matter that comes into contact with food designated for human consumption.

52. Blockhead : TWIT
“Twit” is a word not used very often here in America. It’s a slang term that was quite common in England where it was used for “someone foolish and idiotic”.

53. Egg on : GOAD
The verb “edge” has been used to mean to incite, to urge on, from the 16th century. Somewhere along the way “edge” was mistakenly replaced with “egg”, giving us our term “to egg on” meaning “to goad”.