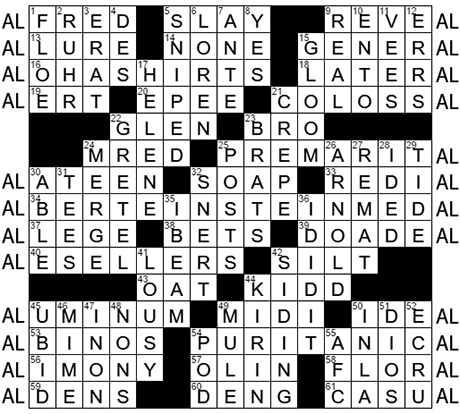 CROSSWORD SETTER: Mark MacLachlan
THEME: Aluminum Siding
To make sense of today’s puzzle, we have to add the letters AL (Al is the symbol for ALUMINUM) at either SIDE of the grid.
BILL BUTLER’S COMPLETION TIME: 12m 57s
ANSWERS I MISSED: 0

Today’s Wiki-est, Amazonian Googlies
Across
1. Hitchcock, for one : ALFRED
Alfred Hitchcock makes a cameo appearance in 39 of his 52 movies. My favorite, and perhaps the most innovative, is in the movie “Lifeboat”. In the film, there is a limited cast, just the people in a lifeboat and no extras. Hitchcock managed to make his appearance in a print ad in a newspaper read by one of the survivors in the boat.

13. Women’s beauty magazine : ALLURE
“Allure” is a magazine published by Condé Nast in New York that was founded in 1991 by Linda Wells. “Allure” contains articles on beauty, fashion and women’s health.

14. Zilch : NONE
We use the term “zilch” to mean “nothing”. Our current usage evolved in the sixties, before which the term was used to describe “meaningless speech”. There was a comic character called Mr. Zilch in the 1930s in “Ballyhoo” magazine. Mr. Zilch’s name probably came from the American college slang “Joe Zilch” that was used in the early 1900s for “an insignificant person”.

20. Fencing option : EPEE
There are three fencing events in the modern Olympics, distinguished by the weapon used:

24. TV character who says “You know I wouldn’t talk in front of anyone but you” : MR ED
The sitcom “Mister Ed” first aired in 1961 and ran for almost five years. It was a very successful show (and even made it to Ireland!). Mister Ed, the talking horse, was a palomino that had the real name of Bamboo Harvester. Mister Ed’s “voice” was that of actor Allan “Rocky” Lane, a star of a lot of B-movie westerns from the forties and fifties. In the show, Mister Ed would only talk to the lead (human) character Wilbur, played by Alan Young, leading to some hilarious situations. Mister Ed had a stunt double and stand-in for the show, another horse called Pumpkin. Pumpkin later made frequent appearances on the show “Green Acres”.

30. Support group for adolescents : ALATEEN
Al-Anon and Alateen are fellowships of relatives and friends of alcoholics. Alateen specifically supports teens who are affected by another’s drinking, whereas Al-Anon focuses on people of all ages.

44. Pirate captain mentioned in Poe’s “The Gold-Bug” : KIDD
William Kidd was a Scottish privateer who went by the name “Captain Kidd”. Although Kidd was a privateer, someone authorized by the government to attack foreign shipping, he was eventually arrested and executed for piracy. There is common opinion held today that the charges against Kidd were actually trumped up. Captain Kidd’s story was the basis of a 1945 film called “Captain Kidd” starring Charles Laughton in the title role. Laughton also appeared as Captain Kidd in 1952’s comic movie “Abbott and Costello Meet Captain Kidd”.

“The Gold-Bug” is a short story by Edgar Allan Poe, a mystery tale about a man who was bitten by a gold-colored bug. The story first appeared in three installments in the ”Philadelphia Dollar Newspaper” in 1843, and became very popular. He had submitted the story to a writing contest sponsored by the paper, and it was published as the winning entry. The grand prize also included $100 in cash, which was likely the largest sum that Poe ever received for a work in his lifetime.

53. Whales like the one in “Moby-Dick” : ALBINOS
In Herman Melville’s 1851 novel “Moby-Dick”, the animal named in the title is an albino sperm whale.

56. Checks for the ex : ALIMONY
In its most common usage, “alimony” is a payment made by one spouse to another for support after a legal separation. The term derives from the Latin “alimonia”, meaning “nourishment, food, support”.

59. Pilgrims John and Priscilla : ALDENS
John Alden is said to have been the first person to disembark from the Mayflower and to have set foot on Plymouth Rock in 1620. Alden himself was not a Pilgrim as such, and was a carpenter working on the Mayflower before it sailed. He apparently decided to travel with the ship at the last minute, perhaps in pursuit of the passenger who would become his wife, Priscilla Mullens. Alden ended up in a love triangle with Priscilla and Captain Miles Standish, a relationship which is recounted in the Longfellow poem “The Courtship of Miles Standish”. John and Priscilla were the parents of a son, John Alden, who was later to be accused during the Salem witch trials.

60. Leader between Mao and Jiang : DENG
Deng Xiaoping was the Paramount Leader of the People’s Republic of China from 1978 to 1992. It was Deng Xiaoping who is given the credit for setting policies that led to China’s current economic boom. He moved the country towards a market economy and opened the borders to allow foreign investment.

Down
1. Arctic shipping hazard : FLOE
An ice floe is a sheet of ice that has separated from an ice field and is floating freely on the ocean.

2. Region in western Germany : RUHR
The Ruhr is a large urban area in western Germany. The area is heavily populated, and is the fifth largest urban area in the whole of Europe, after Istanbul, Moscow, London and Paris. The Ruhr became heavily industrialized due to its large deposits of coal. By 1850, the area contained nearly 300 operating coal mines. Any coal deposits remaining in the area today are too expensive to exploit.

3. Part of Q.E.D. : ERAT
QED is used at the end of a mathematical proof or a philosophical argument. The QED initialism stands for the Latin “quod erat demonstrandum” meaning “that which was to be demonstrated”.

5. Took potshots (at) : SNIPED
“To snipe” is to attack with snide criticism, especially from a safe distance. This usage of the term is an extension of the older meaning, to take a shot from a hidden position (as in “sniper”). Such a shot was originally taken when hunting the game birds called “snipes”.

6. Actress Sophia : LOREN
Sophia Loren certainly has earned her exalted position in the world of movies. In 1962 Loren won an Oscar for Best Actress for her role in the Italian film “Two Women”, the first actress to win an Academy Award for a non-English speaking performance. She received a second nomination for Best Actress for her role in “Marriage Italian-Style”, another Italian-language movie, released in 1964.

7. A penny is a small one : ANTE
Penny Ante poker is a game in which bets are limited to a penny, or some other small, friendly sum. The expression “penny-ante” has come to describe any business transaction that is on a small scale.

8. Word cried 15 times in a row by Meg Ryan in “When Harry Met Sally …” : YES!
The multi-talented Carl Reiner is from the Bronx, New York. Reiner was married to singer Estelle Roberts. You might remember Roberts from the film “When Harry Met Sally” that was directed by Carl’s son, Rob Reiner. Estelle was the woman in the deli who said the famous line “ I’ll have what’s she’s having”, on seeing how excited Meg Ryan apparently was with her sandwich.

11. Some aerial show formations : VEES
Apparently, geese fly in a V-formation for a couple of reasons. One is that it makes for efficient flight and conserves energy. The leading bird gets no advantage, but every following bird gets to “slipstream” a little. It has been noted that the lead bird drops to the back of the formation when he/she gets fatigued. It’s also thought that the flock can stick together more easily when in formation, so it is more difficult to lose someone along the way.

21. Brunch option : CREPE
“Crêpe” is the French word for “pancake”.

22. Fairy tale sister : GRETEL
“Hansel and Gretel” is a Germanic fairy tale found in the collection of the Brothers Grimm. It tells of two siblings, Hansel and Gretel, the children of a woodcutter. The youngsters are abandoned in a forest at the behest of an evil stepmother. Clever Hansel hears of the plan and leaves a trail of pebbles so that he and his sister can find their way home, which they do. But the children are abandoned again and this time leave a trail of breadcrumbs. Unfortunately, the crumbs are eaten by birds and so the children do indeed become lost. But eventually they do all live happily ever after …

25. Writes on a blog : POSTS
Many folks who visit this website regard it as just that, a website. That is true, but more correctly it is referred to as a blog, as I make regular posts (actually daily posts) which then occupy the “front page” of the site. The blog entries are in reverse chronological order, and one can just look back day-by-day, reading older and older posts. “Blog” is a contraction of the term “web log”.

31. Course requirements? : TEES
That would a golf course.

32. Dog in the funnies : SNERT
“Hägar the Horrible” is a comic strip that was created by the late Dik Browne and is now drawn by his son, Chris Browne. “Hägar the Terrible” (not “Horrible”) was the nickname given to Dik by his sons. The strip’s title character is a red-bearded Viking living on the Norwegian coast during the Middle Ages. Hägar lives with his overbearing wife Helga, his sensitive son Hamlet, his pretty daughter Honi, and his clever dog Snert.

44. Competitor of Sapporo : KIRIN
Kirin lager is the oldest brand of beer in Japan. The “Kirin” name comes from the Japanese word for a mythical Chinese creature.

Sapporo is the fourth largest city in Japan, and lies on the island of Hokkaido. The city and surrounding area was home to the first Olympic Games to be held in Asia, the Winter Games of 1972. For the beer drinkers out there, Sapporo is also home to Sapporo Brewery, with the Sapporo beer being one of the more internationally recognizable.

48. Rennes rejections : NONS
Rennes is the capital city of the Brittany region of France, and is also the administrative capital of the department known as Ille-et-Vilaine.

50. “To Live and Die ___” (1985 film) : IN LA
“To Live and Die in L.A.” is novel written by Gerald Petievich, a former Secret Service agent. The book was made into a pretty successful 1985 film starring William L. Petersen, the former lead from TV’s “CSI”. Petersen plays the good guy, and Willem Dafoe the bad guy. The plot is all about a pair of Secret Service agents tracking down a counterfeiter. I haven’t seen the film, but it’s on my list …

51. God, in Granada : DIOS
Granada is a city and province in Andalusia in the south of Spain. Granada should not to be confused with Grenada (note the different spelling), the island nation in the Caribbean that was invaded by the US in 1983.

52. Neutral shade : ECRU
The shade called ecru is a grayish, yellowish brown. The word “ecru” comes from French and means “raw, unbleached”. “Ecru” has the same roots as our word “crude”.

55. Steelers’ grp. : AFC
The Pittsburgh Steelers football team were founded in 1933, making them the oldest franchise in the AFC. Back in 1933, the team was known as the Pittsburgh Pirates. The Pirates name was chosen as the Pittsburgh baseball team was the Pirates. The name was changed to the Steelers in 1940, and then the Steagles in 1943 when the team merged with the Philadelphia Eagles. There was a further merger in 1944, with the Chicago Cardinal to form Card-Pitt. From 1945, the Steelers name was resurrected.