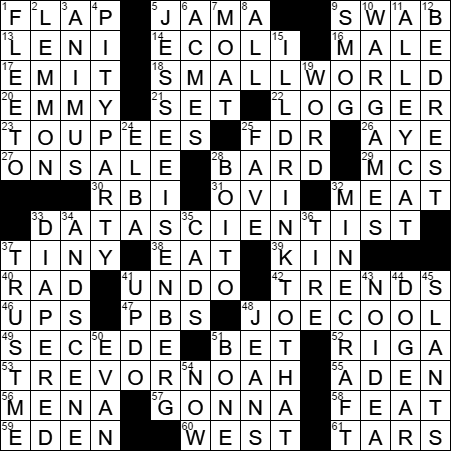 Today’s Wiki-est, Amazonian Googlies
Across
1. Epiglottis, for one : FLAP
The epiglottis is an elastic cartilage flap located above the larynx. The epiglottis opens when breathing, and closes when swallowing. That motion directs air into the lungs, and food into the stomach.

9. Navy enlistee, informally : SWAB
Swabbie (also “swabby, swab, swabber”) is a slang term for a sailor, which we’ve been using since the late 1700s. A “swab” was originally a member of the crew assigned to the swabbing (mopping) of the ship’s decks.

13. Seducer of Josef in Kafka’s “The Trial” : LENI
Franz Kafka was born in 1883 in Prague, then part of Bohemia and today the capital of the Czech Republic. Kafka is known as one of the greatest novelists who worked in the German language, and even has an adjective named after him. Something that is “kafkaesque” is senseless, disorienting and may have menacing complexity. As it was for many great artists, Kafka’s fame came after his death when much of his work was published.

14. C.D.C. concern : E COLI
Escherichia coli (E. coli) are usually harmless bacteria found in the human gut, working away quite happily. However, there are some strains that can produce lethal toxins. These strains can make their way into the food chain from animal fecal matter that comes into contact with food designated for human consumption.

20. Tony’s cousin : EMMY
The Emmy Awards are the television equivalent of the Oscars in the world of film, the Grammy Awards in music and the Tony Awards for the stage. Emmy Awards are presented throughout the year, depending on the sector of television being honored. The most famous of these ceremonies are the Primetime Emmy Awards and the Daytime Emmy Awards. The distinctive name of “Emmy” is a softened version of the word “immy”, the nickname given to the video camera tubes found in old television cameras.

Sardi’s is a renowned restaurant in the Theater District of Manhattan that was opened in 1927 by Italian immigrant Vincent Sardi, Sr. Sardi’s is famous for attracting celebrities who pose for caricatures that are then displayed on the restaurant’s walls. After the death of actress and director Antoinette Perry in 1946, her friend and partner Brock Pemberton was having lunch at Sardi’s and came up with idea of a theater award that could be presented in Perry’s honor. The award was to be called the Tony Award. In fact, Vincent Sardi, Sr. was presented with a special Tony at the first award ceremony, held in 1947.

25. D.C.’s ___ Memorial, site next to West Potomac Park : FDR
The very moving Franklin Delano Roosevelt memorial in Washington, D.C. was designed by Lawrence Halprin. It was dedicated in 1997 by President Clinton. Sculptures of President Roosevelt within the 7.5-acre memorial feature FDR alongside his Scottish Terrier named Fala.

29. Does some hosting, briefly : MCS
The term “emcee” comes from “MC”, an initialism standing for Master or Mistress of Ceremonies.

30. Stat for David Ortiz : RBI
The Dominican American baseball player David Ortiz has the nickname “Big Papi”. After each home run that Ortiz scores, he looks upwards and points to the sky, a tribute to his mother who died in a car crash in 2002 when she was only 46 years old.

48. “Peanuts” alter ego : JOE COOL
When cartoon beagle Snoopy adopts his “Joe Cool” alias, he puts on sunglasses and just leans against a wall doing nothing.

52. Europe’s Gulf of ___ : RIGA
The Gulf of Riga is a bay in the Baltic Sea, lying between Latvia and Estonia.

53. Comedian with the 2016 memoir “Born a Crime” : TREVOR NOAH
Trevor Noah is a comedian from Johannesburg, South Africa. Noah took over as host of the Comedy Channel’s “The Daily Show” after Jon Stewart retired. Noah can speak several languages, including English, Xhosa, Zulu, Sotho, Afrikaans, and German.

55. Mideast’s Gulf of ___ : ADEN
The Gulf of Aden is the body of water that lies south of the Red Sea, and just north of the Horn of Africa.

56. Actress Suvari : MENA
Mena Suvari’s most famous role to date is probably “the beauty” in the 1999 movie “American Beauty”. She plays the teenage girl with whom the Kevin Spacey character becomes infatuated. She also played Heather in the “American Pie” films.

58. Coup : FEAT
A coup d’état (often just “coup”) is the sudden overthrow of a government, and comes from the French for “stroke of state”. The Swiss-German word “putsch” is sometimes used instead of “coup”, with “Putsch” translating literally as “sudden blow”.

59. Sistine Chapel depiction : EDEN
The Sistine Chapel, in the Pope’s residence in Rome, takes its name from Pope Sixtus IV who was responsible for restoring the old Capella Magna in the 15th century. It was about a century later (1508-1512) that Michelangelo painted the ceiling of the Sistine Chapel under the patronage of Pope Julius II.

61. Ones whose assent is 26-Across : TARS
(26A. Assent for 61-Across : AYE)
A Jack Tar, or just “tar”, was a seaman in the days of the British Empire. The term probably arose due to a sailor’s various uses of tar back then, including waterproofing his clothes and using tar in his hair to slick down his ponytail.

Down
2. Co-star of “Some Like It Hot” : LEMMON
The marvelous actor Jack Lemmon was born in 1925 in a suburb of Boston, in a hospital elevator. The long list of Jack Lemmon movies on my list of favorites includes “Some Like It Hot”, “The Apartment”, “Irma La Douce”, “The Odd Couple” and “Grumpy Old Men”.

Some Like it Hot is such a fun movie, released in 1959 and directed by Billy Wilder. The big three in the cast are of course Marilyn Monroe, Tony Curtis and Jack Lemmon. Several years ago a stage version of “Some Like It Hot” was playing in San Francisco, with Tony Curtis in the cast. This time he played the older man who was wooing the Jack Lemmon character in the movie.

7. Certain barrier to entry : MOAT
A “moat” is a protective trench that surrounds a castle, say, or a an exhibit in a zoo. A moat may or may not be filled with water.

9. It’s hardly a breath of fresh air : SMOG
“Smog” is a portmanteau formed by melding “smoke” and “fog”. The term was first used to describe the air around London in the early 1900s. Several cities around the world have a reputation of being particularly smoggy. For example, the most smog-plagued city in Latin America is Mexico City, which is located in a highland “bowl” that traps industrial and vehicle pollution.

24. Historic isle in the Tyrrhenian Sea : ELBA
I had a lovely two-week vacation in Tuscany once, including what was supposed to be a two-night stay on the island of Elba. I had envisioned Elba as a place full of history, and maybe it is, but it is also overrun with tourists who use it as a beach getaway. We left after one day and we won’t be going back again …

The Tyrrhenian Sea is that part of the Mediterranean that lies off the west coast of Italy. It is bounded on the north and east by the Italian mainland, on the west by the large islands of Corsica and Sardinia, and on the south by Sicily.

28. Librettist for Verdi’s “Otello” and “Falstaff” : BOITO
Arrigo Boito was an Italian poet and librettist who completed one opera of his own (“Mefistofele”) and who left one other opera partially complete called “Nerone”.

“Falstaff” is an opera by Giuseppe Verdi that draws on the character Falstaff from William Shakespeare’s “The Merry Wives of Windsor”. “Falstaff” was the maestro’s last opera, written while Verdi was in his 80s.

33. Tended to, as a baby : DIAPERED
“Diaper” is another word that I had to learn when I moved to America. What are called “diapers” over here, we call “nappies” back in Ireland. The term “diaper” is actually the original term that was used in England for the garment, where “diaper” referred to the cloth that was used. The term diaper was brought to the New World where it stuck. Back in Britain, diaper was displaced by the word “nappy”, a diminutive of “napkin”.

41. Beehive, for one : UPDO
That distinctive “beehive” hairstyle is also called a B-52, because the round, beehive-shape also resembles the bulbous nose of a B-52 bomber! The style originated in 1958, and is credited to Margaret Vinci Heldt, the owner of a hair salon in downtown Chicago. I’m not a fan of the beehive, but I do have to say that Audrey Hepburn carried it off in “Breakfast at Tiffany’s”, as did Dusty Springfield in her heyday.

50. Actress ___ Rachel Wood : EVAN
Actress Evan Rachel Wood’s most famous role to date is playing one of the leads in the 2003 movie “Thirteen”. She is working on two new films which sound intriguing, namely “Bronte” in which she plays one of the author sisters, Anne, and “Phantasmagoria: The Visions of Lewis Carroll”. Wood’s private life draws a lot of attention, especially as she was romantically linked for some time with the “outrageous” musician Marilyn Manson.