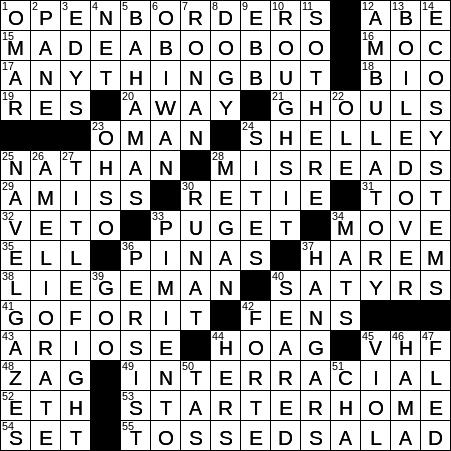 Today’s Wiki-est, Amazonian Googlies
Across
12. Half a ten-spot : ABE
The US five-dollar bill is often called an “Abe”, as President Lincoln’s portrait is on the front. An Abe is also referred to as a “fin”, a term that has been used for a five-pound note in Britain since 1868.

16. Loafer alternative, for short : MOC
“Moc” is short for “moccasin”, the type of shoe.

The type of slip-on shoe called a “loafer” dates back to 1939. “Loafer” was originally a brand name introduced by the Fortnum and Mason’s store in London.

19. Flat, e.g.: Abbr. : RES
“Flat” is a word more commonly used in the British Isles than here, in the sense of an apartment or condominium. The word “flat” is Scottish in origin, in which language it meant a “floor in a house”.

21. Grave robbers : GHOULS
Our word “ghoul” comes from the Arabic “ghul”, the name for an evil spirit that feeds on corpses.

23. Land in which political parties are banned : OMAN
Oman lies on the southeast coast of the Arabian Peninsula and is neighbored by the OAE, Saudi Arabia and Yemen. Oman is a monarchy, and the official name of the state is the Sultanate of Oman. All of the country’s legislative, executive and judiciary power resides with the hereditary sultan.

24. She created a monster : SHELLEY
Mary Shelley’s Gothic novel has the full title of “Frankenstein; or, The Modern Prometheus”. The subtitle underscores one of the themes of the book, a warning about man’s expansion into the Industrial Revolution.

25. First name in hot dogs : NATHAN
Nathan’s Famous has held a Hot Dog Eating Contest every July 4th since 1916, and always at the same location on Coney Island.

32. Nix : VETO
“Veto” comes directly from Latin and means “I forbid”. The word was used by tribunes of Ancient Rome to indicate that they opposed measures passed by the Senate.

33. Sound of the Northwest : PUGET
George Vancouver was a British explorer, and an officer in the Royal Navy. As well as exploring the coast of Australia, he is best known for his travels along the northwest coast of North America. The city of Vancouver was named in his honor. Travelling with him on his American voyage was a lieutenant Peter Puget, and in his honor, Vancouver named the waters south of the Tacoma Narrows “Puget’s Sound”. Nowadays, the name Puget Sound describes an area much greater than Vancouver had envisioned.

36. Ingredients in the national drink of Puerto Rico, to Puerto Ricans : PINAS
“Piña colada” is a Spanish term which translates into “strained pineapple”. The Piña colada cocktail was introduced in the Caribe Hilton San Juan in 1954, and since 1978 it has been the official beverage of Puerto Rico. Yum …

37. An elephant seal will fight for one : HAREM
There are three families of seals. The first is the walrus family, the second the eared seals (like sea lions), and thirdly the earless seals (like elephant seals).

38. Vassal : LIEGEMAN
A liege was a feudal lord, one to whom service or allegiance was owed under feudal law. “Liege” (and “liegeman”) was also the term used for one who owed allegiance or service to a lord. Very confusing …

40. Part-human gods : SATYRS
The satyrs of Greek mythology came with a very high sex drive. They are the “rude” male subjects drawn on the side of old Greek vases. The nubile maidens known as nymphs were often an object of attention for the satyrs.

43. Melodious : ARIOSE
A tune that is “ariose” is song-like, characterized by melody as opposed to harmony.

44. Romance novelist Tami : HOAG
Tami Hoag is a novelist best known for writing romances and thrillers. She is a prolific writer and once had five consecutive titles on the New York Times bestsellers list, all in a 20-month period.

Down
1. Bradley with many medals : OMAR
Omar Bradley graduated from West Point in the class of 1915, along with Dwight Eisenhower who also attained the rank of General of the Army. Bradley was the last person to hold the rank of a five-star commissioned officer, and he was the first general to serve as Chairman of the Joint Chiefs of Staff. I was struck by a quotation from Bradley from later in his life:

3. Brand with the flavor French Silk : EDY’S
Dreyers’ ice cream sells its products under the name Dreyers in the Western United States, and Edy’s in the Eastern states. The company’s founders were William Dreyer and Joseph Edy.

5. Where many Loyalists resettled after the American Revolution : BAHAMAS
The Bahamas is a group of islands in the Atlantic Ocean, lying in the same island chain as Cuba and Hispaniola. The Bahamas was a British colony for many years but became independent in 1973, although it retains membership in the British Commonwealth.

6. Real name of Ben, in a sci-fi classic : OBI-WAN
Obi-Wan Kenobi is one of the more beloved of the “Star Wars” characters. Kenobi was portrayed by two fabulous actors in the series of films. As a young man he is played by Scottish actor Ewan McGregor, and as an older man he is played by Alec Guinness.

7. Actress Saoirse with two Oscar nominations : RONAN
Saoirse Ronan is an Irish-American actress, having been born in the Bronx, New York and raised in Carlow and Dublin in Ireland. Ronan’s big break came when she was cast in the 2007 film “Atonement” at 12 years of age, a role for which she was nominated for that season’s Best Supporting Actress Oscar. “Saoirse” is the Irish word for “freedom”.

26. Take the edge off : AMELIORATE
“To ameliorate” is to make better, and comes to us from French. The French for “better” is “meìlleur”.

28. Actress Mullally with two Emmys : MEGAN
Megan Mullally is an actress probably best known for playing Karen Walker on the TV sitcom “Will & Grace”. Mullally also has a recurring role on the sitcom “Parks and Recreation”, playing Tammy Swanson, the ex-wife of Ron Swanson. In real life Tammy and Ron aren’t exes, as Megan Mullally is married to actor Nick Offerman who plays Ron Swanson.

34. Sights at a martial arts center : MATS
“Martial arts” are various fighting traditions and systems used in combat or simply to promote physical well-being. The term ultimately derives from Latin and means “Arts of Mars”, a reference to Mars, the Roman god of war.

37. Places to fix flaps : HANGARS
“Hangar” is a French word for “shed”. The French first started using the term for a “shed for airplanes” in the very early 1900s.

44. For the goose, not the gander? : HERS
A male goose is called a gander, with the female simply being referred to as a “goose”. Young geese are called goslings.

45. Alto clef instrument : VIOL
The viola da gamba (also called simply “viol”) is a bass instrument in what is known as the viol family, with a tonal range that about matches that of the modern-day cello. It is the second largest of all the viols, so is played resting on the floor between the legs. In fact, “viola da gamba” is Italian translating into “viol for the leg”.

Clef is the French word for “key”. In music, a clef is used to indicate the pitch of the notes written on the stave. The bass clef is also known as the F-clef, the alto clef is the C-clef, and the treble clef is the G-clef.

51. Dance bit? : CHA
The cha-cha-cha (often simplified to “cha-cha”) is a Latin dance with origins in Cuba, where it was introduced by composer Enrique Jorrin in 1953.