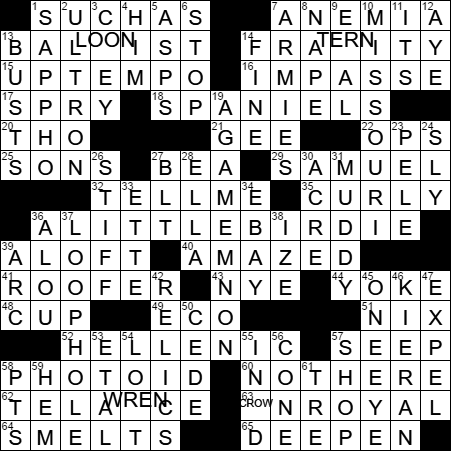 CROSSWORD SETTER: Hal Moore
THEME: A Little Birdie
We have a rebus puzzle today, with A LITTLE BIRDIE occupying four squares in the grid. Apologies for the untidy nature of my grid. It seems that my birdies aren’t small enough to fit into the rebus squares:

36A. Secret’s source … that can be found four times in this puzzle : A LITTLE BIRDIE

13A. One traveling in a basket : BALLOONIST
14A. Place where people are rushing : FRATERNITY
62A. Best Picture subject nine inches shorter than the actor who portrayed him : TE LAWRENCE
63A. Whisky first produced for King George VI’s 1939 visit to Canada : CROWN ROYAL
3D. Rosemary, for one : CLOONEY
9D. Constant : ETERNAL
54D. Shabby : LOW-RENT
55D. Cool people : IN CROWD

Today’s Wiki-est, Amazonian Googlies
Across
1. To wit : SUCH AS
The verb “to wit” means “to know”. The verb really isn’t used anymore except in the phrase “to wit” meaning “that is to say, namely”.

7. Weakness : ANEMIA
The term “anemia” (or “anaemia” as we write it back in Ireland) comes from a Greek word meaning “lack of blood”. Anemia is a lack of iron in the blood, or a low red blood cell count. Tiredness is a symptom of the condition, and so we use the term “anemic” figuratively to mean “lacking in vitality or substance”.

14. Place where people are rushing : FRATERNITY
A “rush” is a drive by a fraternity or sorority to recruit new members on campus.

16. Deadlock : IMPASSE
“Impasse” is a French word for a blind alley or an impassable road, and we use the term to mean “stalemate”.

18. White House pets for Reagan and both Bushes : SPANIELS
Spaniels are gun dogs, or bird dogs, hunting dogs bred to find and retrieve game. The etymology of “spaniel” suggests that the breed is Spanish in origin, as the term came into English from the Old French “espaigneul” meaning “Spanish”.

20. Le Duc ___, decliner of the 1973 Nobel Peace Prize : THO
Le Duc Tho was the Vietnamese diplomat who engaged in secret talks in Paris with Henry Kissinger in the early seventies. Those talks led to the eventual withdrawal of American troops from Vietnam, and also led to Le Duc Tho and Henry Kissinger being awarded the Nobel Peace Prize in 1973. Le Duc Tho refused to accept the award because there was no formal peace agreement signed at that point.

22. Black ___ : OPS
“Black ops” is the name given to covert operations, activities that are usually outside of standard military protocol and may even be against the law. Funding for black ops is usually provided by a secret “black budget”.

29. Prophet who anointed Saul : SAMUEL
According to the Bible’s Books of Samuel, Samuel was a prophet and leader of ancient Israel. Samuel anointed Saul and David, the first two kings of Israel. The name “Samuel” translates as “Name of God”.

36. Secret’s source … that can be found four times in this puzzle : A LITTLE BIRDIE
A little birdie told me the answer to this clue …

44. It keeps a team together : YOKE
A yoke is a wooden beam used between a pair of oxen so that they are forced to work together.

52. Greek : HELLENIC
Someone from Greece can be called a Hellene. “Ellas” is the Greek word for “Greece”, the name of the country. Greece is also known as the “Hellenic” Republic.

62. Best Picture subject nine inches shorter than the actor who portrayed him : TE LAWRENCE
“Lawrence of Arabia” is a 1962 movie that recounts the real life story of T. E. Lawrence, a British army officer famous for his role in the Sinai and Palestine Campaign of World War I. The title role in the film is played by Irish actor Peter O’Toole. The role of Sherif Ali ibn el Kharish is played by Omar Sharif.

64. Refines, in a way : SMELTS
Metals are found in ore in the form of oxides. In order to get pure metal from the ore, the ore is heated and the metal oxides within are reduced (i.e. the oxygen is removed) in the chemical process known as smelting. The oxygen is extracted by adding a source of carbon or carbon monoxide which uses up the excess oxygen atoms to make carbon dioxide, a waste product of smelting (and, a greenhouse gas).

5. Ancient symbols of sovereignty : ASPS
The venomous snake called an asp was a symbol of royalty in Ancient Egypt.

10. Subject of an 1820 compromise : MISSOURI
The Missouri Compromise was an arrangement made in 1820 in the US Congress to maintain a balance in representation in the US Senate between slave state and free states. Missouri was added as a slave state, while at the same time the state of Maine was created as a free state when it seceded from the Commonwealth of Massachusetts.

13. Exceeds 21, in a way : BUSTS
The game of “twenty-one” was first referred to in a book by Cervantes, the author famous for writing “Don Quixote”. He called the game “ventiuna” (Spanish for “twenty-one”). Cervantes wrote his story just after the year 1600, so the game has been around at least since then. Twenty-one came to the US but it wasn’t all that popular so bonus payments were introduced to create more interest. One of the more attractive bonuses was a ten-to-one payout to a player who was dealt an ace of spades and a black jack. This bonus led to the game adopting the moniker “Blackjack”.

19. Aeschylus tragedy : AGAMEMNON
Agamemnon was a figure in Greek mythology, the husband of Helen. When Helen ran off with Paris to Troy, Agamemnon led the united Greek forces in the resulting Trojan War.

Aeschylus was one of three ancient Greek tragedians whose work has survived. The first of these was Aeschylus, the second Sophocles, and the third Euripides. Aeschylus is sometimes referred to as the father of tragedy, as his work is the earliest known representation of the style.

23. Sports star with a signed jersey in the Vatican : PELE
Pelé is the nickname of Edson de Nascimento, a soccer player who has used the name Pelé for most of his life. Pelé is now retired, and for my money was the world’s greatest ever player of the game. He is the only person to have been part of three World Cup winning squads, and is a national treasure in his native Brazil. One of Pele’s nicknames is “O Rei do Futebol” (the King of Football).

27. Club alternative : BLT
The BLT (bacon, lettuce and tomato) is the second most popular sandwich in the US, after the plain old ham sandwich.

28. “___ & Duke at the Côte D’Azur” (1966 jazz album) : ELLA
Ella Fitzgerald, the “First Lady of Song”, had a hard and tough upbringing. She was raised by her mother alone in Yonkers, New York. Her mother died while Ella was still a schoolgirl, and around that time the young girl became less interested in her education. She fell in with a bad crowd, even working as a lookout for a bordello and as a Mafia numbers runner. She ended up in reform school, from which she escaped, and found herself homeless and living on the streets for a while. Somehow Fitzgerald managed to get herself a spot singing in the Apollo Theater in Harlem. From there her career took off and as they say, the rest is history.

Duke Ellington was a bandleader and composer believed by many to have elevated jazz to the same level as other respected genres of music. Ellington tended not to use the word “jazz” to describe his compositions, preferring the term “American Music”.

30. 1 chain x 1 furlong : ACRE
At one time, an acre was defined as the amount of land a yoke of oxen could plow in a day. This was more precisely defined as a strip of land “one furrow long” (i.e. one furlong) and one furlong wide. The length of one furlong was equal to 10 chains, or 40 rods. A area of one furlong times 10 rods was one rood.

31. Obfuscate : MUDDY
“To obfuscate” is to make something unclear, a word derived from the Latin “obfuscare” meaning “to darken”.

33. Rock follower? : -ETTE
The famous Rockettes can be seen in Radio City Music Hall. They have an amazing schedule during the Christmas season when they perform five high-kicking shows every day, seven days a week. The troupe has been doing this every Christmas for 77 years.

34. Fortune 500 company founded in 1995 : EBAY
There have been some notable things sold on eBay over the years. For example:

36. Name of a family with a combined 7,228 hits : ALOU
Jesus Alou played Major League Baseball, as did his brothers Matty and Felipe, and as does Felipe’s son Moises.