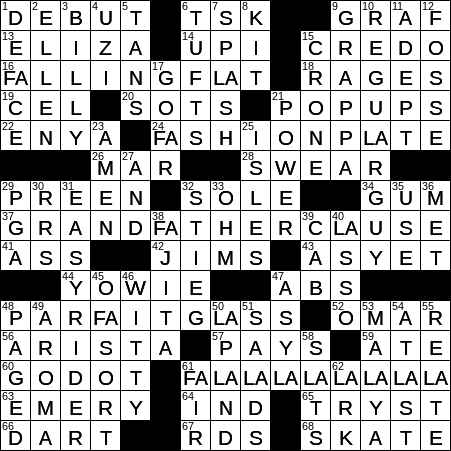 Today’s Wiki-est, Amazonian Googlies
Across
9. Only tennis player to have won each Grand Slam event at least four times : GRAF
Steffi Graf is a former World No. 1 professional tennis player from Germany. Graf won 22 Grand Slam singles titles, more than any other man or woman other than Margaret Court. She is married to another former World No. 1, namely Andre Agassi.

14. Reuters competitor : UPI
Founded in 1958, United Press International (UPI) used to be one of the biggest news agencies in the world, sending out news by wire to the major newspapers. UPI ran into trouble with the change in media formats at the end of the twentieth century and lost many of its clients as the afternoon newspapers shut down due to the advent of television news. UPI, which once employed thousands, still exists today but with just a handful of employees.

15. Words to live by : CREDO
A creed or credo is a confession of faith, or a system of belief or principles. “Credo” is Latin for “I believe”.

19. Doc’s image, e.g.? : CEL
In the world of animation, a cel is a transparent sheet on which objects and characters are drawn. In the first half of the 20th century the sheet was actually made of celluloid, giving the “cel” its name.

22. Singer with the 2008 album “And Winter Came …” : ENYA
Enya’s real name is Eithne Ní Bhraonáin, which can translate from Irish into Enya Brennan. Her Donegal family (in the northwest of Ireland) formed a band called Clannad, which included Enya. In 1980 Enya launched her very successful solo career, eventually becoming Ireland’s best-selling solo musician. And, she sure does turn up a lot in crosswords!

24. Trendy type : FASHION PLATE
A “fashion plate” is a fashionable person, someone who dresses in the latest fashions. The term originally applied to illustrations (plates) that were used to disseminate fashionable styles in the 1800s and early 1900s.

34. It’s not allowed in many classrooms : GUM
And not anywhere in this house either …

37. Discriminatory part of post-Reconstruction legislation : GRANDFATHER CLAUSE
The term “grandfather clause” originated in new state constitutions adopted in some of the Southern states after the Civil War. Clauses were included in these constitutions that were designed to restrict voting rights of non-whites. The strategy used was to introduce laws that restricted voters across the board, but then add clauses that exempted persons allowed to vote before the Civil War, and their descendants, effectively boosting the size of the white electorate. This treatment of “descendants” (grandchildren) gave rise to the term “grandfather clause”.

47. Chippendales dancers have nice ones : ABS
Chippendales is a big touring operation featuring exotic male dancers. The show started out as a nightclub in Los Angeles in the early eighties. The club name was inspired by the Chippendale-style furniture used in the club.

48. Short-stemmed vessel : PARFAIT GLASS
A parfait is a frozen dessert made from sugar, syrup, egg and cream. The American version of this popular French dessert is a layered creation, featuring parfait cream, ice cream and flavored gelatins topped with whipped cream and possibly a liqueur. The term “parfait” is French for “perfect”.

52. Actor Epps : OMAR
Omar Epps is the actor who played Eric Forman on the excellent television series “House”. Prior to playing Dr. Forman, Epps had a recurring role playing Dr. Dennis Grant on “ER”. And, in another link to the world of medicine, Epps was born in Savannah, Georgia to single mom, Dr. Bonnie Epps.

56. Bygone record label : ARISTA
Arista Records was set up as part of Columbia Pictures by one Clive Davis. He chose “Arista” as it was the name of the New York City Honor Society to which Davis belonged.

60. Title character who never appears : GODOT
“Waiting for Godot” is a play by novelist and playwright Samuel Beckett that premiered in 1953. Irishman Beckett actually wrote the piece in French, under the title “En attendant Godot”. He then translated the play into English himself.

61. Christmastime refrain : FA LA LA LA LA LA LA LA LA
The music for the Christmas song “Deck the Halls” is a traditional Welsh tune that dates back to the 16th century. The same tune was used by Mozart for a violin and piano duet. The lyrics with which we are familiar (other than the “f-la-la”) are American in origin, and were recorded in 19th century.

63. ___ paper (abrasive) : EMERY
Emery is a very hard type of rock that is crushed for use as an abrasive. Emery paper is made by gluing small particles of emery to paper. Emery boards are just emery paper with a cardboard backing. And emery boards are primarily used for filing nails.

65. Plot feature of Shakespeare’s “Troilus and Cressida” : TRYST
In its most general sense, a tryst is a meeting at an agreed time and place. More usually we consider a tryst to be a prearranged meeting between lovers. The term comes from the Old French “triste”, a waiting place designated when hunting. Further, a tryst taking place at lunchtime is sometimes referred to as a “nooner”.

William Shakespeare wrote his tragedy “Troilus and Cressida” in 1602. The play was inspired by “The Iliad”, and is a retelling of events during the Trojan War leading up to the death of Hector.

Down
1. Cover with graffiti, say : DEFACE
“Graffiti” is the plural of “graffito”, the Italian for “a scribbling”. The word was first used to describe ancient inscriptions on the walls in the ruins of Pompeii.

2. 1990s sitcom about a bookstore owner : ELLEN
Ellen DeGeneres is a very, very successful TV personality, having parlayed her career in stand-up comedy into lucrative gigs as an actress and talk show host. Back in 1997 DeGeneres chose the “Oprah Winfrey Show” to announce that she was a lesbian. Her character on “The Ellen Show” also came out as a lesbian in a scene with her therapist, who was played by Oprah Winfrey. Nice twist!

4. Mideastern heat? : UZI
The first Uzi submachine gun was designed in the late 1940s by Major Uziel “Uzi” Gal of the Israel Defense Forces, who gave his name to the gun.

6. School whose mascot is Jumbo the elephant : TUFTS
Tufts University is a private school near Boston. The school was built in 1852 on land donated by Charles Tuft a local businessman. One of the early benefactors of the school was P. T. Barnum who funded the Barnum Museum of Natural History located on the college grounds. This museum is home to the stuffed hide of Jumbo, the famous elephant. Jumbo is also the school’s mascot.

9. Fragrant Italian brandy : GRAPPA
Grappa is an Italian brandy that is made by distilling the skins, pulps, seeds and stems that are left over from winemaking after the grapes have been pressed. .

12. Bob who directed the 1966 musical “Sweet Charity” : FOSSE
Bob Fosse won more Tony Awards for choreography than anyone else, a grand total of eight (and another Tony for direction). Fosse also won an Oscar for Best Director for his 1972 movie “Cabaret”, even beating out the formidable Francis Ford Coppola who was nominated that same year for “The Godfather”.

25. British ___ : ISLES
The British Isles is the name of the group of islands that includes the two main islands of Great Britain (England, Wales, Scotland) and Ireland, as well as thousands of smaller islands.

29. Sports org. with pitching : PGA
The Professional Golfers’ Association (PGA) was founded in 1916 and today has its headquarters (unsurprisingly) in Florida, where so many golfers live. Back in 1916, the PGA was based in New York City.

31. 1969 film whose working title was “The Loners” : EASY RIDER
The Harley-Davidson motorcycle company was started up in the very early 1900s by two childhood friends, William Harley and Arthur Davidson, . Their first design was in effect an engine hooked up to a pedal bicycle, but the 116 cc cylinder capacity simply couldn’t generate enough power to get up the hills of their native city of Milwaukee. The pair came up with a redesigned model that had a cylinder capacity of 405 cc, which the partners built in a shed at the back of Davidson’s house. In 1906, the partners built their first factory, located where the company’s headquarters is to this day, on Juneau Avenue in Milwaukee, Wisconsin.

32. Larsson who wrote “The Girl With the Dragon Tattoo” : STIEG
Stieg Larsson was a Swedish journalist and writer, and indeed one of his main characters in his Millennium series of novels is a journalist as well. The first two titles in the series are “The Girl with the Dragon Tattoo” and “The Girl Who Played with Fire”. The last of the three titles in the Millennium series is “The Girl Who Kicked the Hornet’s Nest”, which was the most-sold book in the US in 2010. All of the books in the series were published after Larsson’s death. He passed away from a heart attack while climbing several flights of stairs, when he was just 50 years old.

33. Volt per ampere : OHM
The unit of electrical resistance is the ohm (with the symbol omega) named after German physicist Georg Simon Ohm. Ohm was the guy who established experimentally that the amount of current flowing through a circuit is directly proportional to the voltage applied, (V=IR) a relationship that every schoolkid knows as Ohm’s Law.

35. “I will speak daggers to her, but ___ none”: Hamlet : USE
The full title of William Shakespeare’s play that we tend to call “Hamlet” is “The Tragedy of Hamlet, Prince of Denmark”. It is the most performed of all Shakespeare’s plays and it is also his longest, the only one of his works comprising over 4,000 lines. That’s about a 4-hour sitting in a theater …

38. Dish in a tortilla : FAJITA
“Fajita” is a Tex-Mex term that refers to grilled meat served on a tortilla. The Mexican term “fajita” is used to describe a small strip of chicken or beef. Nowadays, fajitas are often served on a sizzling platter with the tortillas and condiments on the side.

40. Rope : LASSO
Our English word “lasso” comes from the Spanish “lazo”, and ultimately from the Latin “laqueum” meaning “noose, snare”.

46. Like bon mots : WITTY
“Bon mot” translates from French as “good word”. We use “bon mot” (and sometimes just “mot”) to mean a quip, a witticism.

50. Home to the Sami people : LAPLAND
Lapland is a geographic region in northern Scandinavia, largely found within the Arctic Circle. Parts of Lapland are in Norway, Sweden and Finland. The people who are native to the region are called the Sami people. The Sami don’t like to be referred to as “Lapps” and they regard the term as insulting.