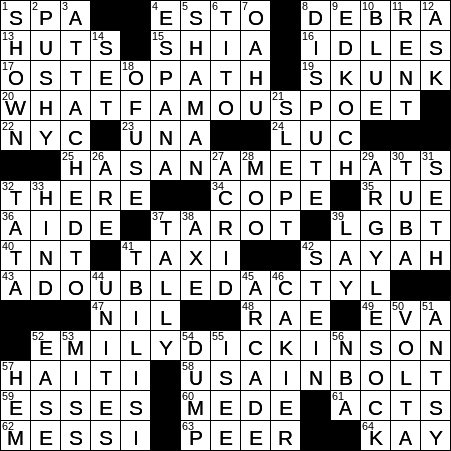 CROSSWORD SETTER: Peter Gordon
THEME: Reinterpret A-Phrase
Today’s themed answers point to a poet whose name is a double-dactyl, a word or phrase comprising six syllables in which the first and fourth are stressed. If we look carefully, we see an additional level of complexity in the puzzle, as every single clue is also a double-dactyl. And, thanks to Jeff Chen for pointing that out!

52A. Here’s what the answer is … : EMILY DICKINSON

Today’s Wiki-est, Amazonian Googlies
Across
1. Place known for pampering : SPA
The word “spa” migrated into English from Belgium, as Spa is the name of a municipality in the east of the country that is famous for its healing hot springs. The name “Spa” comes from the Walloon word “espa” meaning “spring, fountain”.

4. Idaho motto word : ESTO
“Esto perpetua” is the Latin phrase meaning, “Let it be perpetual”. It is used as the motto of a number of groups, as well as the state of Idaho. The words are attributed to the theologian Paolo Sarpi (Fra Paolo), his last words, a wish for his native Venice, “let it be perpetual”.

8. Winger of “Shadowlands” : DEBRA
When Debra Winger was a young woman she was involved in a terrible car accident that resulted in a cerebral hemorrhage. She was left partially paralyzed and blind, and was told that she would never see again. Given so much time to think after the accident, she decided that if she did indeed recover she would leave her home in Ohio and move to California to take up acting. After ten months of blindness Winger recovered, and off she headed.

22. SoHo’s metropolis : NYC
The Manhattan neighborhood known today as SoHo was very fashionable in the early 1900s, but as the well-heeled started to move uptown the area became very run down and poorly maintained. Noted for the number of fires that erupted in derelict buildings, SoHo earned the nickname “Hell’s Hundred Acres”. The area was then zoned for manufacturing and became home to many sweatshops. In the mid-1900s artists started to move into open loft spaces and renovating old buildings as the lofts were ideal locations in which an artist could both live and work. In 1968, artists and others organized themselves so that they could legalize their residential use of an area zoned for manufacturing. The group they formed took its name from the name given to the area by the city’s Planning Commission i.e “South of Houston”. This was shortened from So-uth of Ho-uston to SoHo as in the SoHo Artists Association, and the name stuck.

23. A, in Iberia : UNA
The Iberian Peninsula in Europe is largely made up of Spain and Portugal. However, also included is the Principality of Andorra in the Pyrenees, a small part of the south of France, and the British Territory of Gibraltar. Iberia takes its name from the Ebro, the longest river in Spain, which the Romans named the “Iber”.

24. Ice hockey’s Robitaille : LUC
Luc Robitaille is a retired professional hockey player, mostly known for his career with the Los Angeles Kings. Robitaille holds the record as the highest-scoring left winger in the history of the NHL.

32. Starter of limericks : THERE …
No one knows for sure how the limerick got its name, although there does seem to be agreement the name does indeed come from the city or county of Limerick in Ireland. Try this one for size:

37. Deck with a Justice card : TAROT
Tarot cards have been around since the mid-1400s, and for centuries were simply used for entertainment as a game. It has only been since the late 1800s that the cards have been used by fortune tellers to predict the future. The list of tarot cards includes the Wheel of Fortune, the Hanged Man and the Lovers.

40. Blasting material : TNT
“TNT” is an abbreviation for trinitrotoluene. Trinitrotoluene was first produced in 1863 by the German chemist Joseph Wilbrand, who developed it for use as a yellow dye. TNT is relatively difficult to detonate so it was on the market as a dye for some years before its more explosive properties were discovered.

43. End of the question is … : … A DOUBLE-DACTYL?
In one sense, a double dactyl is a verse form. Verses in such form are usually humorous. They comprise two stanzas of four lines each. The first three lines use dactylic dimeter, i.e. six syllables the first and fourth of which are stressed. By extension, such lines are referred to as “double-dactyls”.

49. Youngest Gabor sister : EVA
Eva Gabor was the youngest of the Gabor sisters, all three of whom were celebrated Hollywood actresses and socialites (her siblings were Zsa-Zsa and Magda). One of Eva’s claims to fame is the unwitting promotion of the game called “Twister”, the sales of which were languishing in 1966. In an appearance on “The Tonight Show” she got on all fours and played the game with Johnny Carson. Sales took off immediately, and Twister became a huge hit.

52. Here’s what the answer is … : EMILY DICKINSON
Emily Dickinson wrote nearly 1800 poems in her lifetime, with less than a dozen published before she died in 1886. Emily’s younger sister discovered the enormous collection, and it was published in batches over the coming decades.

57. Country with voodooists : HAITI
Voodoo is a religion that originated the French slave colony of Saint-Domingue on the Caribbean island of Hispaniola.

58. Fastest Olympian : USAIN BOLT
Usain Bolt is a Jamaican sprinter who won the 100m and 200m race gold medals in both the 2008 and 2012 Olympic Games. Back in Jamaica, Bolt was really into cricket and probably would have been a very successful fast bowler had he not hit the track instead.

60. Ancient Iranian : MEDE
The Medes were an ancient people that lived in what is now northwestern Iran. The Medes held sway in the region only for about 60 years, until Cyrus the Great came along and defeated Astyages, the king of Media (not to be confused with Howard Stern, the self-proclaimed “king of all media”!).

62. Argentine footballer : MESSI
Lionel Messi is a soccer player from Argentina. Messi was awarded FIFA’s Ballon d’Or (Golden Ball) award from 2009 to 2013. The Ballon d’Or is presented to the player who is considered the best in the world in the prior year.

Down
4. Andalucía’s land : ESPANA
In Spanish, “Spain” is written as “España”.

Andalusia (“Andalucía” in Spanish) is one of the seventeen autonomous communities in the Kingdom of Spain, and is the most southerly. The capital of Andalusia is the old city of Seville. The name Andalusia comes from its Arabic name, Al-Andalus, reflecting the region’s history as the center of Muslim power in Iberia during medieval times.

5. Medical sorcerer : SHAMAN
A shaman is a supposed intermediary between the human world and the spirit world.

6. Yugoslav dictator : TITO
Marshal Josip Broz Tito led the Yugoslav resistance during WWII. After the war, he led the country as Prime Minister and then President.

7. Island with Diamond Head : OAHU
Diamond Head on the Hawaiian island of O’ahu was given its name by British sailors in the 1800s. These sailors found calcite crystals in the rock surrounding the volcanic tuff cone and mistook the crystals for diamonds.

Back in the 14th century, a “lozenge” was a diamond shape. The original lozenges, which were tablets held in the mouth to dissolve, had this diamond shape and hence the name.

37. Total for scorekeepers : TALLY
Back in the mid-1600s, a “tally” was a stick marked with notches that tracked how much one owed or had paid. The term came from the Latin “talea” meaning “stick, rod”.

39. Troubadour offering : LAY
A lay is a narrative ballad or simple melody, one usually associated with the days of the troubadours.

42. Mug in a rathskeller : STEIN
A city hall in Germany is called a Rathaus. In days gone by there was often a restaurant located in the basement or cellar of a Rathaus, and this restaurant was given the name Rathskeller.

45. Place to play Centipede : ARCADE
Our word “arcade” comes from the Latin “arcus” meaning “arc”. The first arcades were passages made from a series of arches. This could be an avenue of trees, and eventually any covered avenue. I remember arcades lined with shops and stores when I was growing up on the other side of the Atlantic. Arcades came to be lined with lots of amusements, resulting in amusement arcades and video game arcades.

Centipede is an arcade game from Atari (it was my favorite!). The game was designed by Ed Logg and Dona Bailey, with Bailey being one of the few female game designers back then (it was released in 1980). Perhaps due to her influence, Centipede was the first arcade game to garner a significant female following.

50. Physics class eponym : VOLTA
Alessandro Volta was the physicist who invented the first battery, way back in 1800. One of Volta’s first applications of his new invention was to use a battery (and a very long run of wire between the Italian cities of Como and Milan) to shoot off a pistol from 30 miles away!

51. Nervous and fidgety : ANTSY
The word “antsy” embodies the concept of “having ants in one’s pants”, meaning being nervous and fidgety. However, “antsy” has been used in English since the 1830s, whereas “ants in the pants” originated a century later.

56. Org. for the Pelicans : NBA
The New Orleans Pelicans joined the NBA in 1988 as an expansion team, originally based in Charlotte, North Carolina. The team was going to be called the Charlotte Spirit, but the name was changed following a “name the team” contest run in the local area. During the Revolutionary War, Lord General Cornwallis had referred to Charlotte as a “veritable nest of hornets” due the city’s resistance to British occupation, which explains the local fans’ fondness for the name “Hornets”. The franchise was moved to New Orleans for the 2002 season, as attendance wasn’t big enough to sustain the team in Charlotte. The team had to play two seasons in Oklahoma City due to damage caused by Hurricane Katrina, and played as the New Orleans/Oklahoma City Hornets. After several years back in New Orleans, the franchise was renamed to the Pelicans, a nod to the Brown Pelican that is the Louisiana state bird.