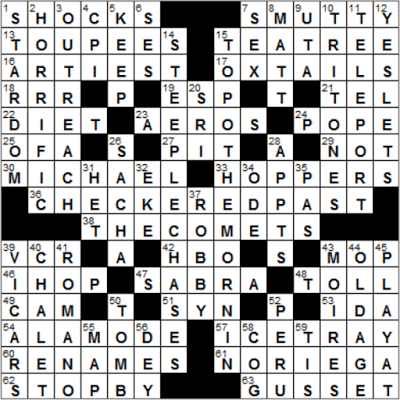 CROSSWORD SETTER: Jacob Stulberg
THEME: Checkered Past
We have four x-like, CHECKERBOARD patterns in today’s grid. The white squares within the mini-checkerboards contain the letters P-A-S-T:

36A. Liability for a political candidate … as depicted four times in this puzzle? : CHECKERED PAST

Today’s Wiki-est, Amazonian Googlies
Across
7. Like some R-rated movies : SMUTTY
“Smut” means “dirt, smudge” and more recently “pornographic material”. The term comes from the Yiddish “schmutz”, which is a slang word used in English for dirt, as in “dirt on one’s face”.

19. Ability of some of the heroes on NBC’s “Heroes” : ESP
“Heroes” is a television show that ran on NBC from 2006 to 2010. It’s all about ordinary folk developing superhuman powers, sort of like many comic book characters.

24. Word before or after Alexander : POPE
There have been eight popes who took the name Alexander.

Alexander Pope was an English poet, famous for his own compositions as well as for a translation of Homer’s works. One of Pope’s most notable poems is “Ode on Solitude” that opens with:

Happy the man, whose wish and care
A few paternal acres bound,
Content to breathe his native air,
In his own ground.
Pope wrote that when he was just twelve years old!

30. George who sang “I Want Your 7-Down” : MICHAEL
(7D. See 30-Across : SEX)
I found out relatively recently that the eighties pop duo that we knew on the other side of the Atlantic as “Wham!” were better known as “Wham! UK” in North America. Apparently there already was a band called Wham! here in the US. Wham! UK was composed of singers George Michael and Andrew Ridgeley. George Michael made it big as a solo artist after the pair broke up, but Ridgeley kind of faded into obscurity, relatively speaking.

38. Bill Haley’s backup band : THE COMETS The famed rock & roll singer and songwriter Bill Haley started out his career as the frontman of Bill Haley and the Saddlemen, playing country and western music. The name was changed to Bill Haley and His Comets in 1952 as the band started performing rock & roll songs. The name “Comets” was imitative of the common mispronunciation of the famous Halley’s comet (sometimes written incorrectly as “Haley’s” comet). The group recorded “Rock Around the Clock” a year later, in 1953.

42. “True Detective” airer : HBO “True Detective” is a crime drama made by HBO that has an interesting format. Each series has its own narrative and cast. The show seems to be attracting some great actors. The first season was led by Matthew McConaughey and Woody Harrelson, and the second by Colin Farrell and Rachel McAdams.

47. Native-born Israeli : SABRA Jewish people born in the State of Israel, or the historical region of israel, are known as Sabras. “Sabra” is actually the name of the prickly pear, the thorny desert cactus. Apparently the name “Sabra” is used because someone born in the region is said to be tough on the outside and sweet on the inside, just like a prickly pear.

49. Kiss ___ : CAM The “kiss cam” is a diversion during some sporting events in which a video camera picks out random couples in the crowd, projecting their image onto the giant screen at the venue. The couples are encouraged to kiss, for the entertainment of the fans. Famously, President Barack Obama and First Lady Michelle Obama kissed for the kiss cam at a basketball game a few years ago, as did former President Jimmy Carter and former First Lady Rosalynn Carter.

To take “a gander” is to take a long look. It’s a term we’ve been using since the 1880s and comes from the idea that in taking a long look one might be craning one’s neck like a goose (or gander).

54. Modifier on a dessert menu : A LA MODE In French, “à la mode” simply means “fashionable”. In America, the term has also come to describe a way of serving pie. Pie served à la mode includes a dollop of cream or ice cream, or as I recall from my time living in Upstate New York, with a wedge of cheddar cheese.

61. Leader targeted in 1989’s Operation Nifty Package : NORIEGA Manuel Noriega was the forcibly removed from power by US forces in 1989 after he spent six years as military dictator of Panama. Noriega was found guilty of several crimes in a US court, including drug-trafficking. He served time with prisoner-of-war status in Florida for 17 years, until 2007. Noriega was extradited from the US to France in 2010, where he served more time for money-laundering. He was then extradited from France to Panama to face trial for human rights violations. Noriega remains in a Panamanian prison to this day.

63. Cloth insert : GUSSET A gusset is a triangular insert in the seam of a garment, for added expansion.

Down
4. Economic benchmark, briefly : CPI
The Consumer Price Index (CPI) measures changes in the price of services and goods purchased by households. The United States CPI fell in 2009, for the first time since 1955. That’s how bad the 2009 recession was …

8. Groening who created “The Simpsons” : MATT Matt Groening is a cartoonist. He created two successful animated shows for television, namely “The Simpsons” and “Futurama” (neither of which I understand!).

9. Actress Hagen : UTA Uta Hagen was a German-born American actress. Hagen married Jose Ferrer in 1938, but they were divorced ten years later after it was revealed that she was having a long-running affair with Paul Robeson. Her association with Robeson, a prominent civil rights activist, earned her a spot on the Hollywood Blacklist during the McCarthy Era. This forced her away from film, but towards a successful stage career in New York City.

14. They present hurdles : STEEPLECHASES Back in the 1700s there was a race called a “steeplehunt”, a horse race from a fixed location to some church in the distance which had a steeple visible. This evolved into the race that we know as a “steeplechase”.

15. Cork opener? : TOP O’ THE MORNIN’ “Top o’ the mornin’” is a greeting usually associated with the Irish, although I’ve never heard it used except in jest …

20. Title that anagrams to another title : SRI “Sri” is a title of respect for a male in India.

26. Satirist ___ Baron Cohen : SACHA Sacha Baron Cohen is a comedian and comic actor from England. Baron Cohen is perhaps most famous for playing the characters Borat and Ali G on the small and large screens. I’m not a fan …

34. “Coronation ___” (Elgar composition) : ODE Sir Edward Elgar was the quintessential English composer, inextricably associated with his “Pomp and Circumstance” marches (including “Land of Hope and Glory”) and the “Enigma Variations”.

40. Place to come in from the cold : CHALET “Chalet” is a Swiss-French word for an Alpine cottage.

41. Asiago alternative : ROMANO “Romano” is actually an American term, and is used for a selection of hard and salty cheeses that are typically grated. One of these cheeses is the Italian Pecorino Romano, from which we get the more generic term “Romano”.

Asiago is a crumbly cheese, named after the region in northeastern Italy from where it originates.

43. Patterned fabrics : MOIRES A moiré pattern is a phenomenon in physics, a so-called interference pattern. If you lay two sheets of mesh over each other for example, slightly offset, then what you see is a moiré pattern. “Moiré” is the French name for a textile that we know simply as “moire”. The rippled pattern of the textile resembles that of the interference pattern.

44. “The most unexpected of all things that happen to a man,” per Leon Trotsky : OLD AGE Leon Trotsky was a Soviet politician and revolutionary, the founder and first leader of the Red Army as well as one of the first members of the Politburo. Trotsky was ousted and deported in 1929 when he opposed the policies of Joseph Stalin. Trotsky continued to be vocal in opposition to Stalin in Mexico, his place of exile. Stalin had him assassinated there in 1940.

52. Source of the Amazon : PERU The Amazon River of South America is the world’s largest in terms of volume, and accounts for an amazing one-fifth of the world’s total river flow. Perhaps even more amazing is that there are no bridges across the Amazon! There isn’t even one, mainly because the river flows through tropical rainforest where there are few roads and cities.

56. Actress Susan : DEY The actress Susan Dey first appeared on “The Partridge Family” when she was 17-years-old when she had no acting experience. Years later, Dey won a Golden Globe for playing the leading role of Grace Van Owen in “L. A. Law”.