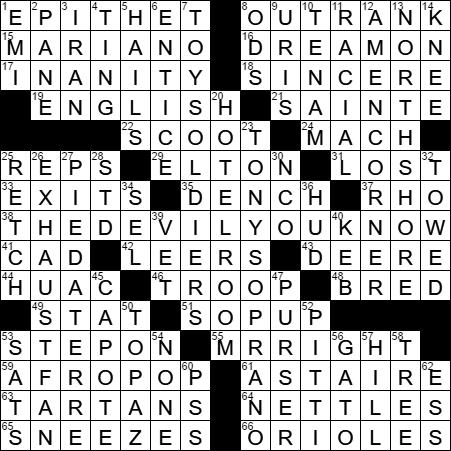 Today’s Wiki-est, Amazonian Googlies
Across
1. “The Great” or “the Terrible” : EPITHET
An “epithet” is a word or phrase, often used in a name, to describe a quality of the person or thing bearing that name. For example, King Richard I was also known as Richard the Lionheart.

15. Yankees closer Rivera : MARIANO
Mariano Rivera is a professional baseball pitcher from Panama City. Rivera played for the New York Yankees from 1995 until his retirement at the end of the 2013 season. Rivera holds the league record for the most career saves (at 652).

19. Like pork pie and clotted cream : ENGLISH
A pork pie is a very traditional British dish, often eaten as a snack food, particularly in pubs. The pie contents are chopped pork and a lot of pork “jelly”, which in posh circles might perhaps be termed “aspic”. My very American wife cannot even watch someone eating a pork pie without her stomach turning …

Clotted cream is a product associated with the southwest of England. It is thick cream prepared by heating rich cow’s milk and allowing it to cool and “clot”. The clots are collected, and sold as “clotted cream”. If you ever order a “cream tea” in England, you’ll get scones, jam and clotted cream. Delicious …

24. Eponymous physicist Ernst : MACH
The Mach number of a moving object (like say an airplane) is its speed relative to the speed of sound. A plane travelling at Mach 2, for example, is moving at twice the speed of sound. The term “Mach” takes its name from the Austrian physicist Ernst Mach who published a groundbreaking paper in 1877 that even predicted the “sonic boom”.

29. John with an Oscar : ELTON
Elton John won the 1995 Best Original Song Oscar for “Can You Feel the Love Tonight” from “The Lion King”. He won the 2000 Best Original Musical Score Tony Award for the musical “Aida”, which he wrote with Tim Rice.

33. Turnpike ticket listings : EXITS
Back in the 15th century a “turnpike” was a defensive barrier across a road. By the 17th century the term was used for a barrier that stopped travelers until a toll was paid. By the 18th century a turnpike was the name given to a road with a toll.

35. Best Actress nominee for “Philomena,” 2013 : DENCH
Dame Judi Dench is an outstanding English actress, known for decades in her home country mainly as a stage and television actress. Dench’s film career took off in the nineties with a relatively trivial role as “M” in the James Bond series of films. Since then she has played leading roles in several excellent movies including “Shakespeare in Love”, “Mrs. Brown”, “Notes on a Scandal” and “Philomena”.

37. Sorority character : RHO
Rho is the Greek letter that looks just like our Roman letter “p”, although it is equivalent to the Roman letter R.

41. Unlikely husband material : CAD
Our word “cad”, meaning “a person lacking in finer feelings”, is a shortening of the word “cadet”. “Cad” was first used for a servant, and then students at British universities used “cad” as a term for a boy from the local town. “Cad” took on its current meaning in the 1830s.

43. Name on an excavator : DEERE
John Deere invented the first commercially successful steel plow in 1837. Prior to Deere’s invention, farmers used an iron or wooden plow that constantly had to be cleaned as rich soil stuck to its surfaces. The cast-steel plow was revolutionary as its smooth sides solved the problem of “stickiness”. The Deere company that John founded uses the slogan “Nothing Runs Like a Deere”, and has a leaping deer as its logo.

44. Old blacklisting org. : HUAC
Lillian Hellman was a dramatist and screenwriter who was famously blacklisted by the House Committee on Un-American Activities (HUAC) in the late forties and early fifties. Although Hellman was ostensibly married to playwright Arthur Kober, her name was linked romantically with author Dashiell Hammett. Hammett was also blacklisted by HUAC for decades.

46. Brownies with cookies, maybe : TROOP
Brownies are a members of the Girl Guiding organization who are seven to ten years old. When the group was founded in 1914 by Lord Baden-Powell, they were known as Rosebuds. That name wasn’t popular with the membership and so was changed, taking inspiration from an 1870 story by Juliana Horatia Ewing called “The Brownies”.

49. Turnovers, e.g. : STAT
That would be a sports statistic.

53. Activate, as a wah-wah pedal : STEP ON
A wah-wah pedal connected to an electric guitar alters the tone of the signal created so that it mimics the human voice.

61. 1984 biography subtitled “The Man, the Dancer” : ASTAIRE
Fred Astaire’s real name was Frederick Austerlitz. Fred was from Omaha, Nebraska and before he made it big in movies, he was one half of a celebrated music hall act with his sister Adele. The pair were particularly successful in the UK, and Adele ended up marrying into nobility in England, taking the name Lady Charles Cavendish.

63. Royal Stewart and Clan Donald : TARTANS
Tartan is sometimes called “plaid” over here in the US, a word not used in the same sense outside of this country. In Scotland a “plaid” is a blanket or a tartan cloth slung over the shoulder.

66. They play just north of the Ravens : ORIOLES
The Baltimore Orioles are one of the eight charter teams of MLB’s American League, so the franchise dates back to 1901. Prior to 1901, the team has roots in the Minor League Milwaukee Brewers, and indeed entered the American League as the Brewers. In 1902 the Brewers moved to St. Louis and became the Browns. The team didn’t fare well in St. Louis, so when it finally relocated to Baltimore in the early fifties the team changed its name completely, to the Baltimore Orioles. The owners so badly wanted a fresh start that they traded 17 old Browns players with the New York Yankees. The trade didn’t help the team’s performance on the field in those early days, but it did help distance the new team from its past.

The Baltimore football team’s name “the Ravens” has a literary derivation. Baltimore was the home of the writer Edgar Allan Poe, and so the team took its moniker from his most famous poem, “The Raven”. The name was selected in a fan contest.

Down
1. Queen’s longtime record label : EMI
EMI was a British music company, with the abbreviation standing for Electric and Musical Industries.

3. Only remaining home of the Asiatic cheetah : IRAN
The cheetah can run faster than any other land animal, achieving speeds of 70-75 mph. The name “cheetah” comes from Sanskrit via Hindi, from the word for “variegated”. Something that is variegated has different colored zones, like the mottled hide of the cheetah.

8. Has way more than enough, for short : ODS
Someone taking an overdose (OD) often ends up in an emergency room (ER).

9. See 50-Down : URIS
Leon Uris is an American writer. Uris’s most famous books are “Exodus” and “Trinity”, two excellent stories, in my humble opinion …

12. Spot for spirited worshipers : AMEN CORNER
“Amen corner” is the name given to that location in a church where the congregation is particularly vocal in responding to the preacher. It’s a term that arose in Southern Baptist churches.

13. Cape Ann’s area : NORTH SHORE
Cape Ann is 30 miles north of Boston and is on the northernmost edge of Massachusetts Bay. The Cape was first mapped by the explorer John Smith. Early in his adventurous life Smith had been captured and enslaved by the Ottoman Empire. His “owner” in his days of slavery was a woman called Tragabigzanda, and apparently the slave and owner fell in love. Smith originally called Cape Tragabigzanda in her memory, but King Charles I changed the name to Cape Ann in honor of his own mother, Anne of Denmark.

23. TV character who fronted as a waste management consultant : TONY SOPRANO
The actor James Gandolfini is perhaps best known for playing Mafia boss Tony Soprano in the HBO show “The Sopranos”. For my money, one of Gandolfini’s best performances was in the 2013 romantic comedy “Enough Said”, opposite Julia Louis-Dreyfus. Sadly, Gandolfini passed away before that film was released.

27. Apartment that’s a second home : PIED-A-TERRE
A “pied-à-terre” is a secondary living space or temporary accommodation, often somewhere to live in a big city that is some distance away from a primary residence. “Pied-à-terre” is French for “foot on the ground”.

36. Ginnie Mae’s dept. : HUD
The Department of Housing and Urban Development (HUD) has its roots in the “Great Society” program of President Lyndon Johnson. HUD’s mission is to address the housing needs of the citizenry at the national level. HUD can provide mortgage insurance to help people become homeowners and also provide rental subsidies to lower-income families. HUD also is responsible for enforcement of Federal Fair Housing laws.

Ginnie Mae is the familiar nickname for the Government National Mortgage Association (GNMA), a government-owned corporation created in 1968 with the objective of promoting home ownership. The “Ginnie Mae” nickname is derived from the GNMA abbreviation.

39. One who might drug a boxer : VET
“Vet” is an abbreviation for “veterinarian”, a professional who treat animals for disease and injury. The word “veterinary” comes from the Latin “veterinae” meaning “working animals, beasts of burden”.

50. 1967 Cold War suspense novel by 9-Down : TOPAZ
The 1967 Leon Uris novel “Topaz” was adapted into a 1969 movie of the same name directed by Alfred Hitchcock. “Topaz” is a little unusual for a Hitchcock work as it doesn’t feature a big Hollywood name, and it wasn’t particularly well received at the box office.

53. Scores of these may plague high schoolers : SATS
Today the standardized test for admission to colleges is known as the SAT Reasoning Test, but it used to be called the Scholastic Aptitude Test and Scholastic Assessment Test, which led to the abbreviation SAT.

56. Chat, across the Pyrénées : GATO
Our word “cat” translates into French as “chat” and into Spanish as “gato”.

57. Setting of Sisyphus’ perpetual rock-pushing : HILL
In the Greek myth, Sisyphus is condemned to roll a boulder up a hill, watch it fall back, then roll it up the hill again for eternity.

60. Additions after closings, in brief : PSS
One adds a PS (post scriptum, or simply “postscript”) at the end of a letter (ltr.). A second postscript is a post post scriptum, a PPS.

62. One of three for Sisyphus? : ESS
In the word “Sisyphus” there are three letters S (ess).