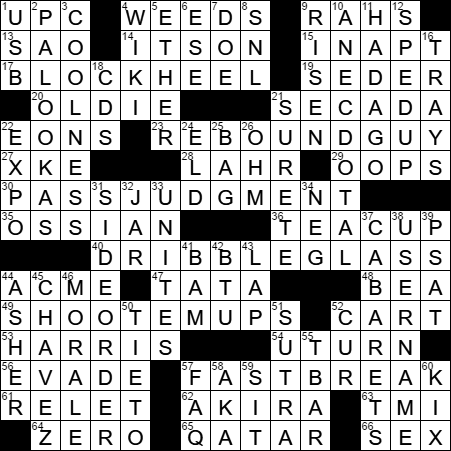 CROSSWORD SETTER: Matthew Sewell
THEME: Fast Break
The first word from today’s themed answers provide us with a sequence of moves that can make up a FAST BREAK in basketball:

Today’s Wiki-est, Amazonian Googlies
Across
1. Scanned bars, for short : UPC
UPC stands for Universal Price Code or Universal Product Code. The first ever UPC-marked item to get scanned in a store was on June 26, 1974 at 08:01 a.m. at Marsh’s supermarket in Troy, Ohio. It was a 10-pack of Wrigley’s Juicy Fruit chewing gum.

4. Roundup targets : WEEDS
Monsanto developed the herbicide glyphosate in 1970. The company brought it to market four years later as Roundup, and it has been around ever since.

9. Cries from bleachers : RAHS
At a sports event one might sit in the “bleachers”. “Bleachers” is a particularly American term used to describe the tiered stands that provide seating for spectators. These seats were originally wooden planks, and as they were uncovered they would be “bleached” by the sun, giving them the name we use today. Sometimes the fans using the bleachers might be referred to as “bleacherites”.

13. Word in Brazilian city names : SAO
“São” is a word used in Portuguese that translates as “saint”.

21. Jon with the 1992 hit “Just Another Day” : SECADA
Jon Secada is a Cuban-American singer/songwriter, born in Havana and raised in Florida. Secada was hired as a background singer by Gloria Estefan in the late eighties, and soon after he started composing for her. It was Gloria Estefan that gave him his performing break, offering him solo spots on stage during her performances.

27. Classic Jaguar : XKE
Auto manufacturer Jaguar started out as a manufacturer of sidecars for motorcycles back in 1922, when the company was known as the Swallow Sidecar Company (SS for short). The company changed its name to Jaguar after WWII, because of the unfortunate connotations of the letters “SS” in that era (i.e. the Nazi paramilitary organization).

28. Bert who played the Cowardly Lion : LAHR
Bert Lahr’s most famous role was the cowardly lion in “The Wizard of Oz”. Lahr had a long career in burlesque, vaudeville and on Broadway. Lahr also starred in the first US production of Samuel Beckett’s play “Waiting for Godot”, alongside Tom Ewell.

29. Klutz’s utterance : OOPS!
A “klutz” is an awkward individual, and the term comes from Yiddish. The Yiddish word for a clumsy person is “klots”.

35. Bard of Gaelic legend : OSSIAN
Oisín (anglicized to “Ossian”) was a poet of legend in Ireland, the narrator of the “Fenian Cycle” of Irish mythology.

44. High point : ACME
The “acme” is the highest point, coming from the Greek word “akme” which has the same meaning.

47. Soho send-off : TATA
The area of London called Soho had a very poor reputation for most of the 20th century as it was home to the city’s red light district. Soho has been transformed though, and has been a very fashionable neighborhood since the 1980s.

48. Actress Arthur of “Maude” : BEA
The seventies sitcom “Maude” starred Bea Arthur as the title character Maude Findlay. “Maude” was a spin-off of “All in the Family”, as Findlay is a cousin of Edith Bunker.

49. Space Invaders and Asteroids, for two : SHOOT ‘EM UPS
Space Invaders is one of my favorite video games, a classic from the good old days (not that I play video games anymore). When Space Invaders was first released in video arcades in Japan in 1978, it was so popular that it caused a shortage of 100-yen coins.

53. Neil Patrick ___ of “How I Met Your Mother” : HARRIS
Neil Patrick Harris got his big break very early in his career, playing the title role in television’s “Doogie Howser, M.D.” More recently he played a lead roles on the sitcom “How I Met Your Mother”, portraying the shallow womanizer Barney Stinson. Harris is also quite the magician and serves on the Board of Directors of Hollywood’s Magic Castle, a nightclub for magicians and magic enthusiasts.

62. “Ran” director Kurosawa : AKIRA
Akira Kurosawa was an Oscar-winning Japanese film director. His most famous movie to us in the West has to be “The Seven Samurai”, the inspiration for “The Magnificent Seven” starring Yul Brynner, and indeed a basis for “Star Wars: The Clone Wars”.

65. Persian Gulf emirate : QATAR
Qatar is a sovereign state in the Middle East occupying the Qatar Peninsula, itself located in the Arabian Peninsula. Qatar lies on the Persian Gulf and shares one land border, with Saudi Arabia to the south. Qatar has more oil and gas reserves per capita of population than any other country in the world. In 2010, Qatar had the fastest growing economy in the world, driven by the petrochemical industry. Qatar is scheduled to host the 2022 FIFA World Cup, although the nation’s eligibility to do so is under question after a far-reaching bribery scandal was uncovered at the sport’s governing body.

66. Census datum : SEX
The original census was taken during the days of the Roman Republic, and was a reckoning of all adult males who were fit for military service. The first US Census was taken in 1790, and was conducted by Federal marshals.

Down
1. Kind of port for a flash drive : USB
Universal Serial Bus (USB) is an industry standard dealing with how computers and electronic devices connect and communicate, and deal with electrical power through those connections.

2. Inept boxers, in slang : PALOOKAS
The word “palooka” was originally used to describe a mediocre prizefighter and dates back to the 1920s. Then there was a comic strip called “Joe Palooka”, and I guess the meanings got melded somehow. Today we use “palooka” as a slang term for an oaf or a clumsy person.

4. Collaborative online reference : WIKI
A wiki is a website in which users are allowed to create and edit content themselves. The term “wiki” comes from the name of the first such site, introduced in 1994 and called WikiWikiWeb. “Wiki” is a Hawaiian word for “quick”, and is used because comprehensive content is created very quickly a there are so many collaborators contributing to the site.

5. Anesthetic of old : ETHER
Ethers are a whole class of organic compounds, but in the vernacular “ether” is specifically diethyl ether. Diethyl ether was once very popular as a general anesthetic.

8. TV show on which “The Chanukah Song” debuted, informally : SNL
“The Chanukah Song” is a novelty song that was first performed by Adam Sandler on “Saturday Night Live” (SNL) in 1994. In the lyrics, Sandler cites a list of Jewish celebrities in an attempt to comfort Jewish children who feel alienated at Christmas. One of the “Jewish” celebrities listed is former MLB baseball player Rod Carew, who Sandler says “converted” to Judaism. However, this is a mistake. Carew married a Jewish woman but did not convert.

9. Like a fully cooked soufflé : RISEN
A soufflé is a French dish, usually served as a dessert. The verb “souffler” means “to blow, blow up”.

18. Components of some I.R.A.s : CDS
A certificate of deposit (CD) is like a less-flexible and higher-paying savings account. Instead of depositing money into a savings account and earning interest periodically, one can open a CD. With a CD one deposits a minimum amount of money but must leave it there for a specified length of time. In return for committing the funds for a fixed period, one is given a higher interest rate than a savings account and can redeem that interest and the initial deposit when the term has expired. CDs are relatively low-risk investments as they are FDIC insured, just like savings accounts.

26. Resistance unit : OHM
The unit of electrical resistance is the ohm (with the symbol omega) named after German physicist Georg Simon Ohm. Ohm was the guy who established experimentally that the amount of current flowing through a circuit is directly proportional to the voltage applied, (V=IR) a relationship that every schoolkid knows as Ohm’s Law.

31. Fries or slaw, usually : SIDE ORDER
The term “coleslaw” is an Anglicized version of the Dutch name “koolsla”, which in itself is a shortened form of “Koolsalade” meaning “cabbage salad”.

34. Like rarer blood types: Abbr. : NEG
Here is an approximate distribution of blood types across the US population:

42. A/C measure : BTU
In the world of heating, ventilation and air conditioning (HVAC), the power of a heating or cooling unit can be measured in British Thermal Units (BTUs). This dated unit is the amount of energy required to heat a pound of water so that the water’s temperature increases by one degree Fahrenheit.

44. One of the 12 tribes of Israel : ASHER
In the Torah, the Israelites are traced back to Jacob, the grandson of Abraham and twin brother of Esau. Jacob had twelve sons, through his concurrent wives Leah and Rachel, and his two concubines Bilhah and Zilpah. The sons became the ancestors of the Twelve Tribes of Israel. The sons were:

45. Labor organizer Cesar : CHAVEZ
César Chávez was a Mexican American farm worker, and co-founder of the union today known as the United Farm Workers. Chávez was born in Yuma, Arizona, but moved to California as a child with his family. He never attended high school, dropping out to become a full-time migrant farm worker. In 1944, at 17 years of age, he joined the US Navy and served for two years. 5-6 years after returning from the military, back working as a farm laborer, Chávez became politically active and rose to national attention as an articulate union leader during some high profile strikes. He is remembered annually here in California on his birthday, March 31, which is a state holiday.

51. Kama ___ : SUTRA
The “Kama Sutra” is renowned for its descriptions of positions that can be used for sexual intercourse, but the sutra includes many other texts that deal with various matters of a sexual nature including how to woo a woman, the conduct of a “chief wife”, the conduct of “other” wives, how to make money as a courtesan and much, much more, as if that isn’t enough …

55. Rope tow alternative : T-BAR
A T-bar is a type of ski lift on which the skiers are pulled up the hill in pairs, with each pair standing (not sitting!) either side of T-shaped metal bar. The bar is placed behind the thighs, pulling along the skiers as they remain standing on their skis (hopefully!). There’s also a J-bar, a similar device, but with each J-shaped bar used by one skier at a time.

57. Website’s help section, briefly : FAQ
Most websites have a page listing answers to Frequently Asked Questions (FAQs). Even this blog has one!

58. Rap sheet letters : AKA
A rap sheet is a criminal record. “Rap” is a slang term dating back to the 1700s that means “blame, responsibility” as in “to take the rap” and “to beat the rap”. This usage morphed into “rap sheet” in the early 1900s.

60. Cereal made with a “puffing gun” : KIX
Kix cereal has been around since 1937, would you believe? Kix used to be just puffed grains, processed to give the characteristic shape. Then the decision was made to add sugar to get better penetration into the young kid marketplace. Sad really …