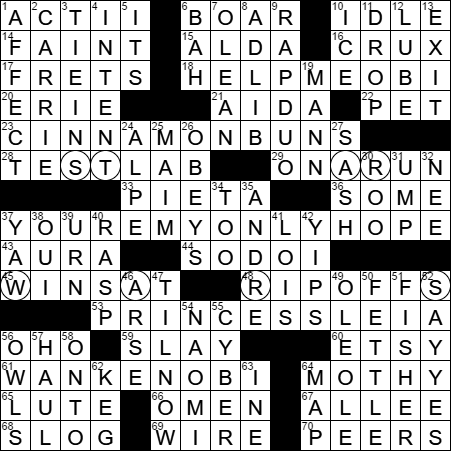 CROSSWORD SETTER: Timothy Polin
THEME: Star Wars
Today’s themed answers all relate to the late Carrie Fisher and the most iconic role that she played on the big screen. The circled letters in the grid spell out the movie name “STAR WARS”.

23A. Hairstyle for 53-Across, colloquially : CINNAMON BUNS

Today’s Wiki-est, Amazonian Googlies
Across
1. When Polonius says “Brevity is the soul of wit” : ACT II
Polonius is an important character in William Shakespeare’s “Hamlet”. Polonius is eventually killed by Hamlet, albeit in a case of mistaken identity. He has several memorable lines in the play that are oft-quoted today, including “To thine own self be true”, “Brevity is the soul of wit”, and “Neither a borrower nor a lender be”.

15. Alan who played Captain Pierce : ALDA
Hawkeye Pierce is the lead character in the “M*A*S*H” novel, movie and TV series. Hawkeye was originally portrayed by Donald Sutherland in the film, and then by Alan Alda in the television show. Pierce is the only character appearing in all 250 episodes of the groundbreaking TV series.

18. With 61- and 37-Across, famous line by 53-Across in [see circled letters] : HELP ME, OBI …
61. See 18-Across : … -WAN KENOBI …
37. See 18-Across : … YOU’RE MY ONLY HOPE
Obi-Wan Kenobi is one of the more beloved of the “Star Wars” characters. Kenobi was portrayed by two fabulous actors in the series of films. As a young man he is played by Scottish actor Ewan McGregor, and as an older man he is played by Alec Guinness.

20. The “E” in HOMES : ERIE
A well-known mnemonic for remembering the names of the Great Lakes is HOMES: standing for Huron, Ontario, Michigan, Erie and Superior.

21. Nubian heroine of opera : AIDA
“Aida” is the famous opera by Giuseppe Verdi, actually based on a scenario written by French Egyptologist Auguste Mariette. Mariette also designed the costumes and stages for the opening performance. The opera was first staged in 1871 in an opera house in Cairo. In the storyline, Aida is an Ethiopian princess brought into Egypt as a slave. Radames is an Egyptian commander who falls in love with her, and then of course complications arise!

23. Hairstyle for 53-Across, colloquially : CINNAMON BUNS
(53A. Iconic role for 2-/51-Down : PRINCESS LEIA)
Princess Leia is Luke Skywalker’s twin sister in the original “Star Wars” trilogy and was played by Carrie Fisher. Carrie Fisher has stated that she hated the famous “cinnamon bun hairstyle” that she had to wear in the films, as she felt it made her face look too round. She also had to to sit for two hours every day just to get her hair styled. Two hours to get your hair done? It takes me just two seconds …

29. Hitting blackjack after blackjack, say : ON A RUN
The game of “twenty-one” was first referred to in a book by Cervantes, the author famous for writing “Don Quixote”. He called the game “ventiuna” (Spanish for “twenty-one”). Cervantes wrote his story just after the year 1600, so the game has been around at least since then. Twenty-one came to the US but it wasn’t all that popular so bonus payments were introduced to create more interest. One of the more attractive bonuses was a ten-to-one payout to a player who was dealt an ace of spades and a black jack. This bonus led to the game adopting the moniker “Blackjack”.

33. Michelangelo masterpiece : PIETA
The Pietà is a representation of the Virgin Mary holding in her arms the dead body of her son Jesus. The most famous “Pietà” is probably the sculpted rendition by Michelangelo which is located in St. Peter’s Basilica in Vatican City. In some depictions, Mary and her son are surrounded by other figures from the New Testament, and these depictions are known as “Lamentations”.

53. Iconic role for 2-/51-Down : PRINCESS LEIA
The full name of the character played by Carrie Fisher in the “Star Wars” series of films is Princess Leia Organa of Alderaan, and later Leia Organa Solo. Leia is the twin sister of Luke Skywalker, and the daughter of Anakin Skywalker (aka Darth Vader) and Padmé Amidala. Leia is raised by her adoptive parents Bail and Breha Organa. She eventually marries Han Solo.

60. Online crafts seller : ETSY
Etsy.com is an e-commerce website where you can buy and sell the kind of items that you might find at a craft fair.

64. Like old, neglected sweaters, maybe : MOTHY
The larvae of several types of moth are noted for eating fabrics made from natural fibers such as wool or cotton. Many people store woolens in cedar chests believing that the scent of the wood prevents a moth infestation. In fact, the only known effective repellent is the naphthalene found in mothballs, which might be a health concern for humans. One way to kill moth larvae in fabric is to freeze the garment for several days at a temperature below 8 degrees centigrade.

65. Renaissance Faire instrument : LUTE
A lute player is a “lutenist”. A nice bit of trivia …

67. Tree-lined walkway, in France : ALLEE
In French, a tree-lined and usually straight path through “une forêt” (a forest) is called “une allée”.

Down
2. With 51-Down, late, beloved actress : CARRIE …
51. See 2-Down : … FISHER
The actress Carrie Fisher was best known for playing Princess Leia in the “Star Wars” series of films. Fisher was the daughter of actress Debbie Reynolds and singer Eddie Fisher. Fisher fell seriously ill on a transatlantic flight at the end of 2016, and then died of cardiac arrest four days later. Famously, her mother and next-door neighbor in Beverly Hills, passed away following a stroke, just one day after her daughter died.

7. Brand of artificial fat : OLEAN
Olean is a brand name for the fat substitute, Olestra. Naturally occuring fats are made of a glycerol molecule holding together three fatty acids. Olestra is instead made of several fatty acid chains held together by a sucrose molecule. Olestra has a similar taste and consistency as natural fat, but has zero caloric impact as it is too large a molecule to pass through the intestinal wall and passes right out of the body. Personally, I would steer clear of it. Olestra is banned in Britain and Canada due to concerns about side effects, but I guess someone knows the right palms to grease (pun intended!) here in the US, and so it’s in our food.

8. Deal with a broken teleprompter, say : AD LIB
Ad libitum is a Latin phrase meaning “at one’s pleasure”. In common usage the phrase is usually shortened to “ad lib”. On the stage the concept of an “ad lib” is very familiar.

10. Makeup of the planet Hoth : ICE
The fictional planet known as Hoth is featured in the “Star Wars” movie “The Empire Strikes Back”. Hoth is an ice planet, and home to a secret base belonging to the Rebel Alliance.

19. “Doctor Faustus” novelist Thomas : MANN
“Doctor Faustus” is a novel by Thomas Mann first published in 1947. It is a retelling of the legend of Faust but set in Germany in the first half of the 20th century.

24. Mont Blanc, e.g., to locals : ALPE
Mont Blanc is the highest mountain in the Alps. The name “Mont Blanc” translates from French into “white mountain”. The mountain lies on the border between France and Italy, and it has been generally accepted for decades that the summit lies within French territory. However, there have been official claims that the summit does in fact fall within the borders of Italy.

30. Figure on an Aussie Xing sign, perhaps : ROO
The name “kangaroo” comes from the Australian Aborigine term for the animal. There’s an oft-quoted story that the explorer James Cook (later Captain Cook) asked a local native what was the name of this remarkable-looking animal, and the native responded with “kangaroo”. The story is that the native was actually saying “I don’t understand you”, but as cute as that tale is, it’s just an urban myth.

32. Formerly named : NEE
“Née” is the French word for “born” when referring to a female. The male equivalent is “né”.

35. Tennis champ Agassi : ANDRE
Retired tennis professional Andre Agassi has been married to fellow player Steffi Graf since 2001. Agassi wrote an autobiography called “Open”, published in 2009. An amazing revelation in the book is that Agassi’s famous head of hair was actually a wig for much of his playing career. Can you imagine how hard it must have been to play tennis at his level with a rug stuck on?

37. Deviate during flight, as a rocket : YAW
The word “yaw” means to deviate from the line of a course and is used mainly at sea. “Yaw” is derived from the Old Norse word “jaege” which means “to drive, chase”. As such, “yaw” is etymologically related to our word “yacht”.

41. Amy Adams’s “Man of Steel” role : LOIS
“Man of Steel” is a 2013 reboot of the “Superman” series of films, starring Henry Cavill in the title role and Amy Adams as Lois Lane.

46. British derrière : ARSE
Well, the word “arse” would never make it into a crossword in the British Isles as it would be considered too rude. I have a similar reaction to the word “shag” as in “The Spy Who Shagged Me”. The film would never have been released with that name in the UK.

49. Chant after a fútbol goal : OLE OLE!
“Fútbol” is the Spanish word for football, soccer.

54. Country singer Judd : NAOMI
The Judds were a country music singing duo made up of Naomi Judd and her daughter Wynonna. Naomi Judd is also the mother of actress Ashley Judd, with Ashley and Wynonna being half-sisters.