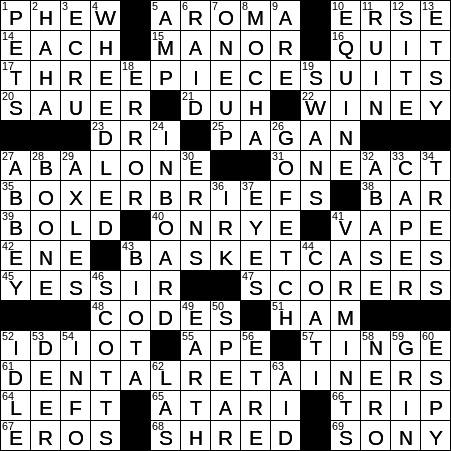 17. Legal actions provoked by oversimple jigsaw puzzles? : THREE-PIECE SUITS
Jigsaws are saws designed for the cutting of irregular curves by hand. The original jigsaw puzzles were created by painting a picture on a sheet of wood and then cutting the picture into small pieces using a jigsaw, hence the name. Today, almost all jigsaw puzzles are pictures glued onto cardboard. The puzzle pieces are then die-cut, and there’s no jigsaw involved at all.

20. Lead-in to kraut or braten : SAUER-
Sauerkraut translates from German as “sour herb” or “sour cabbage”. During WWI, sauerkraut producers changes its name in order to distance their product from the “enemy”. They called it “Liberty cabbage”.
Sauerbraten is a traditional pot roast dish of Germany. The name “Sauerbraten” translates as “sour roast”. The cut of meat is soaked for several days in a vinegar-based marinade (hence “sour”) before cooking.

25. Object of early Christian condemnation : PAGAN
A pagan is someone who holds religious beliefs that are different from the main religions of the world. In classical Latin “paganus” was a villager, a rustic.

27. Mother-of-pearl source : ABALONE
The large edible sea snails that we call abalone are called ormer in the British Isles, and are served as “awabi” at a sushi bar. The abalone shell resembles a human ear, giving rise to the alternative names “ear shell” and “sea ear”.

Mother-of-pearl is another name for nacre. Nacre is the strong iridescent material laid down by some mollusks on the inside of their shells, and it’s also what makes up pearls. The creature lays down nacre as a defensive mechanism, protecting the soft tissue of its body from the rough surface of the outer shell. Similarly, it uses nacre to encapsulate harmful debris or a parasite that penetrates the shell, and that’s how a pearl is formed.

41. Smoke an e-cigarette : VAPE
An electronic cigarette (also called an “e-cigarette”) is a battery-powered device that resembles a real cigarette. The e-cigarette vaporizes a solution that contains nicotine, forming a vapor that resembles smoke. The vapor is inhaled in a process called “vaping”, delivering the nicotine into the body. The assumption is that an e-cigarette is healthier than a regular cigarette as the inhaled vapor is less harmful than inhaled smoke. But, that may not be so …

42. Paris-to-Berlin dir. : ENE
The French capital of Paris is named for the Parisii, a Celtic Iron Age people that lived in the area on the banks of the River Seine.

51. With 40-Across, common deli sandwich : HAM …
(40A. See 51-Across : … ON RYE)
The word “delicatessen” (or “deli” for short) came into English from the German “Delikatessen”. The Germans borrowed the word from French, in which language “délicatesse” means “delicious things (to eat)”. The term’s ultimate root is “delicatus”, the Latin for “giving pleasure, delightful”.

55. Animal with an opposable thumb : APE
Most animals don’t have that all important “opposable thumb” that allows us to work so efficiently with our hands. The characteristic of opposable thumbs is shared by humans, apes, Old World monkeys as well as a few other species.

65. Company that buried 700,000+ unsold video games in 1983 : ATARI
Back in 1983, it was rumored that Atari buried a huge stash of unsold video games in a New Mexico landfill. The game in question was called “E.T. the Extra-Terrestrial”, widely panned as perhaps the worst video game ever produced. Partly because the burial took place close to the site of the Roswell UFO incident, and also because Atari denied that the event ever occurred, the destruction of the games became somewhat of an urban legend.

Down
3. Neutral shade : ECRU
The shade called ecru is a grayish, yellowish brown. The word “ecru” comes from French and means “raw, unbleached”. “Ecru” has the same roots as our word “crude”.

4. Coaxed : WHEEDLED
“To wheedle” is to influence by flattery for one’s gain. Such a lovely verb, I think …

To coax is to cajole, to influence using gentle persuasion. Back in the 16th century, “coax” was a a noun meaning “fool”, and was used in the sense of “make a coax of, make a fool of”.

5. Rock-and-roll need : AMP
An electric guitar, for example, needs an amplifier (amp) to take the weak signal created by the vibration of the strings and turn it into a signal powerful enough for a loudspeaker.

8. Chocolaty hot beverage : MOCHA
Mocha is a port city in Yemen on the Red Sea and was once the principal port for the capital city of Sana’a. Mocha was the major marketplace in the world for coffee until the 1600s, and gave its name to the Mocha coffee bean, which in turn gave it’s name to the mocha brown color, and to the flavor of coffee infused with chocolate.

13. Online crafts seller : ETSY
Etsy.com is an e-commerce website where you can buy and sell the kind of items that you might find at a craft fair.

19. Graceful birds : SWANS
An adult male swan is called a “cob”, and an adult female is a “pen”. Young swans are called “swanlings” or “cygnets”.

28. Frontiersman Daniel : BOONE
Daniel Boone was a pioneer and folk hero. For frontiersman Boone, the frontier was what we now call the state of Kentucky. He led the building of the Wilderness Road through the famous Cumberland Gap in the Appalachians, a route subsequently taken by hundreds of thousands of migrants into Kentucky. Boone fought in the Revolutionary War with distinction, and after the war returned to Kentucky and got himself into land speculation. He became mired in debt, forcing him to emigrate to Missouri to settle down on land that was at that time owned by the French. It was there that he spent the last decades of his life.

30. Shore birds : ERNS
The ern (sometimes “erne”) is also called the white-tailed eagle, or the sea-eagle.

33. Pickled flower bud : CAPER
The seasoning we know as “capers” are the edible flower buds of the caper bush, also known as Flinders rose. By the time we get them in a jar, the buds have been pickled and salted. I’m not a huge fan of capers …

37. Places for contacts : EYES
The concepts that underpin the technology of contact lenses date back to Leonardo Da Vinci. Although Da Vinci didn’t propose the development of the contact lens, he did write about correcting vision by submerging the eye in a bowl of water. Over a hundred years later, René Descartes made a somewhat impractical suggestion, but along the right lines, of using a glass tube filled with liquid that could be placed in contact with the eye to correct vision. The first real contact lenses were developed by Adolf Gaston Eugen Fick, a German ophthalmologist, in 1887.

44. South American animal also known as a “hog-nosed coon” : COATI
A coati is a member of the raccoon family and is also known as the Brazilian aardvark, or the snookum bear. The coati is native to Central and South America, but can also be found in the southwest of the United States.

46. Big name in lawn care : SCOTTS
Scotts Miracle-Gro Company was founded in 1868 by one Orlando Scott, initially selling seed to the agricultural industry. In the early 1900s, Scotts started to sell to homeowners, mainly supplying lawn seed. The company merged with the gardening company Miracle-Gro in 1955.

49. Google ___ : EARTH
Google Earth is a program that maps the Earth by superimposing satellite images and aerial photographs. Google acquired the technology when it purchased Keyhole, Inc in 2004. Keyhole had been partially funded by the CIA.

53. Bambi, e.g. : DEER
The 1942 Disney classic “Bambi” is based on a book written by Felix Salten called “Bambi, A Life in the Woods”. There is a documented phenomenon known as the Bambi Effect, whereby people become more interested in animal rights after having watched the scene where Bambi’s mother is shot by hunters.

58. Fiddling emperor : NERO
The Great Fire of Rome raged for five and a half days in 64 AD. Of the fourteen districts of Rome, three were completely destroyed and seven more suffered serious damage. The emperor at the time was Nero, although reports that he fiddled, played his lyre or sang while the city burned; those accounts are probably not true. In fact, Nero was staying outside of Rome when the fire started and rushed home on hearing the news. He organized a massive relief effort, throwing open his own home to give shelter to many of the citizens who were left living on the street.

62. ___ Cruces, N.M. : LAS
Las Cruces (Spanish for “the crosses”) is the second largest city in the state of New Mexico, and is the home of New Mexico State University.