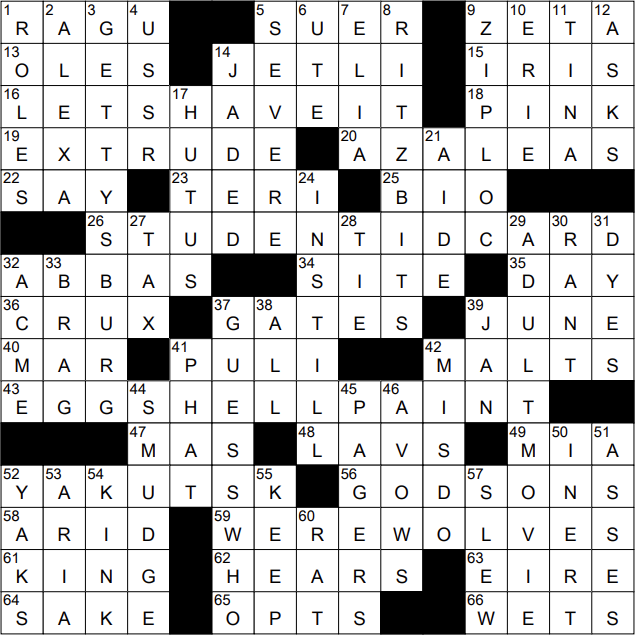 Today’s Theme (according to Bill): Apostrophes

Themed answers are common phrases, but with an apostrophe inserted:

Bolognese sauce is a meat-based sauce originating from Bologna in Italy, hence the name. The recipe is usually referred to as “ragù alla bolognese” in Italian, or simply “ragù”. Note that the Ragú brand of sauces introduced in North America in 1937 takes its name from the same source (pun … sauce!). However, the brand name uses the wrong accent (“Ragú” instead of “Ragù”), which drives a pedant like me crazy ..

9 Letter that’s only 25% of the way through the Greek alphabet, surprisingly : ZETA

In bullfighting, the banderillero is the torero (bullfighter) who plants the little flags in the bull’s shoulder. The Spanish “banderilla” translates as “little flag”. I can’t say that I approve …

Actor Jet Li’s real name is Li Jian Jie. Jet Li is a martial artist and international film star from Beijing, China. Li played a villain in “Lethal Weapon 4”, and had a leading role in the 2000 movie “Romeo Must Die”.

15 Good name for an ophthalmologist : IRIS

The Augusta National Golf Club was built on a former plant nursery. As such, each hole on the course is named for a tree or shrub associated with that hole. For example, the par-5 thirteenth hole is named “Azalea”.

26 Kid at a college bar who seems, to me as a bouncer, too young to allow in : STUDENT I’D CARD (from “student ID card”)

Mahmoud Abbas took over as Chairman of the Palestine Liberation Organization (PLO) in 2004 after the death of Yasser Arafat. Abbas is also the President of the Palestinian National Authority, a position equivalent to “head of state”.

Microsoft founders Bill Gates and Paul Allen met and became friends in high school. Gates was three years younger than Allen, but the pair gravitated towards each other due to a shared interest in computers. One of their first programming projects was to create a computerized version of tic-tac-toe, which they did together on a time-shared computer that was donated to the school by the Mothers’ Association. The two parted company when they graduated and went to different colleges, Allen to Washington State and Gates to Harvard. Allen dropped out of school to start work as a programmer, and he later convinced Gates to drop out of Harvard so that they could create Microsoft.

39 When most Geminis are born : JUNE

The puli is a small herding dog that is noted for its coat with tight curls that resemble dreadlocks. Pulik (the plural of “puli”) originated in Hungary.

49 Nowhere to be found, informally : MIA

Yakutsk is the capital city of the Sakha Republic in Russia. It sits on the Lena River, just south of the Arctic Circle.

59 What the couple dressed in lupine costumes said : WE’RE WOLVES (from “werewolves”)

The prefix “were-” as in “werewolf” derives from an old word “wer” meaning “man”. Hence a werewolf is a “man-wolf”.

61 It’s worth zero in baccarat : KING

Baccarat, in all of its three variants, is a relatively simple casino card game. Baccarat is the favored game of chance for James Bond 007, and it looks so cool when he plays it! Banco!

4 Losing team in the “Miracle on Ice” hockey game : USSR

One of the more celebrated Shoshone people was Sacagawea, the woman who traveled thousands of miles with the Lewis and Clark Expedition, serving as a guide and interpreter.

Ritz Bits are sandwiches made from two Ritz crackers and a filling.

Ziploc resealable storage bags came on the market in 1968.

Solange Knowles is a singer/songwriter, and the younger sister of the incredibly successful singer Beyoncé. Solange was in the news a while back when security camera footage was released showing her punching and kicking Beyoncé’s husband Jay-Z in an elevator.

17 Most Rwandans and Burundians : HUTUS

When the Motion Picture Association (MPAA) film rating system was introduced in 1968, the most restrictive class was an X-rating. Persons under 16 were not admitted to such films. A few years later, the guidelines were changed for all ratings, and no one under the age of 17 was admitted to films rated X. Over time, the term “X-rating” became associated with pornographic films, and so the under-17 restriction was relabeled in 1990 to “NC-17”.

38 Last word of the Pledge of Allegiance : ALL

“… and justice for all.” are the closing words of the Pledge of Allegiance.

45 Waiters at busy restaurants might be handed them : PAGERS

Waiters, those waiting, at a restaurant might be handed pagers.