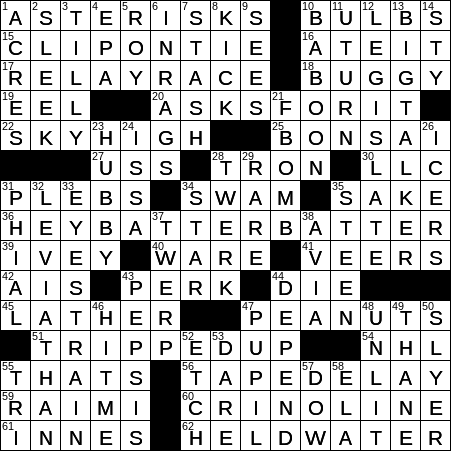 Today’s Wiki-est, Amazonian Googlies
Across
1. Indications of one’s qualifications? : ASTERISKS
The name of the typographical symbol “asterisk” comes from the Greek word “asteriskos” meaning “little star”. The original use of the asterisk was by printers of family trees in feudal times. Back then it was a symbol indicating the date of birth.

18. Like many beta programs : BUGGY
Back in 1947, the famed computer programmer Grace Hopper noticed some colleagues fixing a piece of equipment by removing a dead moth from a relay. She remarked that they were “debugging” the system, and so Hopper has been given credit for popularizing the term.

25. Clip art? : BONSAI
The term “bonsai” is used more correctly to describe the Japanese art of growing carefully shaped trees in containers, although it has come to be used as the name for all miniature trees in pots.

27. ___ George H. W. Bush : USS
The USS George H. W. Bush is a Nimitz-class aircraft carrier named for the former US president, who was also a navy pilot during WWII. The vessel was commissioned in 2009 and is based in Norfolk, Virginia.

28. 1982 Disney film : TRON
Released in 1982, Disney’s “Tron” was one of the first mainstream films to make extensive use of computer graphics. The main role in the movie is played by Jeff Bridges. The original spawned a 2010 sequel called “Tron: Legacy”, as well as a 2012 TV show called “Tron: Uprising”.

30. Hybrid business entity: Abbr. : LLC
A limited liability company (LLC) is a company structure that limits the liability of the owner or owners. It is a hybrid structure in the sense that it can be taxed as would an individual or partnership, while also maintaining the liability protection afforded to a corporation.

31. Ancient Roman citizenry : PLEBS
In ancient Rome, the patricians were the members of the families in the ruling classes. Those Romans who were not patricians by birth were known as plebs.

35. Ritual drink in Shintoism : SAKE
We refer to the Japanese alcoholic beverage made from rice as “sake”. We’ve gotten things a bit mixed up in the West. “Sake” is actually the word that the Japanese use for all alcoholic drinks. What we know as sake, we sometimes refer to as rice wine. Also, the starch in the rice is first converted to sugars that are then fermented into alcohol. This is more akin to a beer-brewing process than wine production, so the end product is really a rice “beer” rather than a rice “wine”.

39. Judith with two Tonys : IVEY
Judith Ivey is an actress from El Paso, Texas. Ivey is perhaps best known for playing B. J. Poteet in the last season of the TV show “Designing Women”.

42. “___ for Alibi” : A IS
Sue Grafton writes detective novels, and her “alphabet series” features the private investigator Kinsey Millhone. She started off with “A Is for Alibi” in 1982 and is working her way through the alphabet, most recently publishing “’W’ is for Wasted” in 2009. Apparently Ms. Grafton is working on her “X is for …” novel, and has already decided that “Z is for Zero” will be the final title in the series. What a clever naming system!

47. Protectors sent packing? : PEANUTS
Styrofoam is an extruded polystyrene foam made by The Dow Chemical Company. Styrofoam has loads of applications, including home insulation and use as a buoyancy aid. It is also formed into “peanuts” used as a packaging filler.

59. Writer/director of “The Evil Dead” : RAIMI
Sam Raimi is a very successful director and producer, responsible for the “Spider-Man” series of films among others, and TV series’ such as “Xena: Warrior Princess”.

60. Stiff material under a ball gown : CRINOLINE
Crinoline is a stiff material used almost exclusively as a structured petticoat to fill out a woman’s skirt. The original crinoline was made from a mixture of horsehair and linen. The name “crinoline” came into English via Italian, and is a melding of “crino” meaning “horsehair” and “lino” meaning “flax”.

61. Novelist Hammond ___ : INNES
Hammond Innes was an English author who mainly wrote thrillers, of which several have been made into films. The most famous of his novels is probably “The Wreck of the Mary Deare”, which was first published in 1956. It was made into a successful movie of the same name in 1959 starring Gary Cooper and Charlton Heston.

Down
1. The Bronx Zoo has 265 of them : ACRES
The Bronx Zoo in New York City is the largest metropolitan zoo in the country, and is located right on the Bronx River.

3. 1985 Oscar nominee for “Agnes of God” : TILLY
Both Meg Tilly and her sister Jennifer are actresses. Meg has been unlucky in her career in some respects. She started out as a dancer, but had to give it up due to a serious accident. As an actress she was cast in the plum role of Constanze Mozart in “Amadeus”, but had to drop out from the role when she hurt her leg playing soccer with some local children during shooting of the film. Meg Tilly has now given up acting, in favor of writing books.

“Agnes of God” is a 1985 film adaptation of a play by John Pielmeier. In the movie, a young novice nun (played by Meg Tilly) is found to be pregnant, but she insists that this is a result of a virgin conception.

4. Wetlands regulator, for short : EPA
The Environmental Protection Agency (EPA) was set up during the Nixon administration and began operation at the end of 1970.

21. It might be caught by a 56-Across : F-BOMB
“F-bomb” refers to the offensive four-letter word beginning with the letter F. The term “F-bomb” was first used in print in a “Newsday” article in 1988 in a story about baseball catcher Gary Carter.

24. California congressman Darrell : ISSA
Darrell Issa is a Republican Representative in the US House who represents a district in Southern California. Issa was a successful businessman before taking his seat, and is often cited as the wealthiest member of Congress.

28. Do some dirty dancing : TWERK
Twerking is a dancing move in which a woman (usually) shakes her hips up and down causing a lot of “wobbling”. It’s possible that “twerk” is a portmanteau of “twist” and “jerk”. The term may have been coined back in the early 2000s with the song “Whistle While You Twurk” released by the Ying Yang Twins. Twerking became a real phenomenon in 2013 when Miley Cyrus posted a video of herself twerking in a unicorn suit to the 2011 song “Wop” by J. Dash. That video went viral on YouTube, amassing over 4 million views in no time at all.

32. Moby Dick, e.g. : LEVIATHAN
Something described as leviathan is huge, of immense size. The word was used for a sea monster mentioned in the Old Testament. As a result, “leviathan” has come to be associated with any large sea monster or creature.

In Herman Melville’s 1851 novel “Moby-Dick”, the animal named in the title is an albino sperm whale.

35. “In Luxury Beware” painter, 1663 : STEEN
Jan Steen was a Dutch painter active in the Dutch Golden Age, the 17th century. Steen’s most famous work is probably “The Feast of Saint Nicholas”, which you can see at the Rijksmuseum in Amsterdam.

38. Nike alternative : AVIA
The Avia brand name for athletic shoes was chosen as “avia” is the Latin word for “to fly”, and suggests the concept of aviation. Avia was founded in Oregon in 1979.

43. Tab alternatives : PEPSIS
Tab was the first diet cola introduced by the Coca-Cola company, in 1963. It was produced as a competitor to the very successful Diet Rite cola that was made by RC Cola. The name “Tab” was used as the beverage was aimed at people who wanted “to keep tabs” on their weight.

47. It grows in the dark : PUPIL
The pupil of the eye is the “hole” located in the center of the iris through which light enters the retina. The term “pupil” came into English via French from the latin “pupilla”, which is the diminutive form of “pupa” meaning “girl, doll”. The term came about due to the tiny doll-like image that one can see of oneself when looking into the center of another’s eyes.

49. Banquo, for one : THANE
Thanes were Scottish aristocrats. The most famous thanes have to be the Shakespearean characters Macbeth (the Thane of Glamis, later Thane of Cawdor, and later King of Scotland) and MacDuff (the Thane of Fife). Other thanes in “Macbeth” are Ross, Lennox and Angus, as well as Menteith and Caithness.

Banquo is a character in William Shakespeare’s “Macbeth”. Banquo is the thane of the Scottish province of Lochaber. Macbeth has him murdered, only to have Banquo’s ghost return and haunt him.

55. Prefix with athlete : TRI-
An Ironman Triathlon is a race involving a 2.4 mile swim, a 112 mile bike ride, and a marathon run of just over 26 miles. The idea for the race came out of a debate between some runners in the 1977 Oahu Perimeter Relay. They were questioning whether runners, swimmers or bikers were the most fit athletes. The debaters decided to combine three local events to determine the answer, inviting athletes from all three disciplines. The events that were mimicked to come up with the first triathlon were the Waikiki Roughwater swim (2.4 miles), the Around-Oahu Bike Race (115 miles) and the Honolulu Marathon (26.2 miles). The idea was that whoever finished first would be called “the Iron Man”. The first triathlon was run in 1978, with fifteen starters and only twelve finishers. The race format is used all over the world now, but the Hawaiian Ironman is the event that everyone wants to win.

57. Giant in chemicals : DOW
Dow Chemical Company was founded back in 1897 by a chemist called Herbert Henry Dow, and initially manufactured and sold bleach and potassium bromide. Dow is now the second-largest chemical manufacturer in the world according to revenue, second only to the German company BASF.