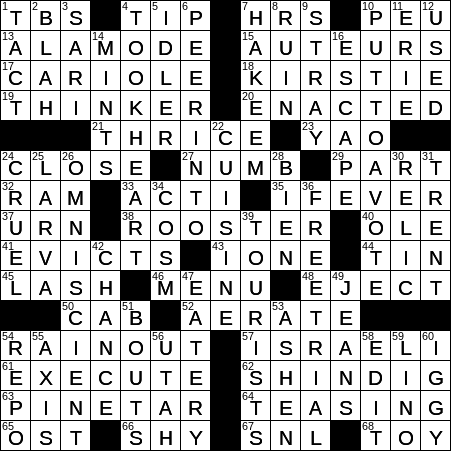 CROSSWORD SETTER: Sandy Ganzell
THEME: Not As Wide
There is a note with the electronic version of the puzzle that I solved:

Today’s themed answers are in the down-direction and are located in columns that are “not as wide” as the others in the grid. We need to take into account the lack of width of these answers to make full sense of the corresponding clues:

Today’s Wiki-est, Amazonian Googlies
Across
1. Cable channel owned by Time Warner : TBS
The tbs cable television station started out in 1967 as local broadcast TV station in Atlanta. The station’s first call letters were WJRJ-TV, and this was changed to WTCG in 1970 when it was acquired by Ted Turner (the TCG stood for Turner Communications Group). In 1976, Turner started distributing WTCG via satellite making its programming available in other parts of the country. WTCG was only the second channel to transmit via satellite, following HBO. The difference was that WTCG was broadcast without requiring a premium subscription. The station’s call sign was changed again in 1979 to WTBS, with TBS standing for Turner Broadcasting System. In 1981, the channel adopted the moniker “Superstation WTBS”.

13. Fashionable : A LA MODE
In French, “à la mode” simply means “fashionable”. In America, the term has also come to describe a way of serving pie. Pie served à la mode includes a dollop of cream or ice cream, or as I recall from my time living in Upstate New York, with a wedge of cheddar cheese.

15. Distinctive filmmakers : AUTEURS
We use the term “auteur” to describe a film director with a distinctive style, one that is distinct enough to overcome the influence of a movie studio and other commercial pressures. Examples often cited are Akira Kurosawa, Alfred Hitchcock, Howard Hawks and Jean Renoir. “Auteur” is a French word meaning “author”.

18. Alley seen on TV : KIRSTIE
Kirstie Alley was born Kirstie Deal, and takes her stage name from her first marriage, to Robert Alley. Her most famous role was that of Rebecca Howe, Sam Malone’s boss on the sitcom “Cheers” from 1987 to 1993.

23. ___ Ming, 2016 Hall of Fame inductee : YAO
Yao Ming is a retired professional basketball player from Shanghai who played for the Houston Rockets. At 7’6″, Yao was the tallest man playing in the NBA.

32. Pickup line? : RAM
Chrysler put ram hood ornaments on all of its Dodge branded vehicles starting in 1933. When the first line of Dodge trucks and vans were introduced in 1981, they were named “Rams” in honor of that hood ornament.

37. Keats ode subject : URN
Here’s the first verse of the poem “Ode on a Grecian Urn” by John Keats:

43. Actress Skye : IONE
Ione Skye is an American actress born in Hertfordshire in England. She is best known for portraying the character Diane Court in the 1989 high school romance movie “Say Anything …”, starring opposite John Cusack. Skye is the daughter of the Scottish folk singer Donovan.

50. Certain varietal, for short : CAB
The Cabernet Sauvignon grape has been around since the 17th century, and is the result of a chance crossing in southwestern France of the Cabernet franc and Sauvignon blanc grapes.

62. Big to-do : SHINDIG
“Shindig” is such a lovely word, I think, describing a party that usually includes some dancing. Although its origin isn’t really clear, the term perhaps comes from “shinty”, a Scottish game that’s similar to field hockey.

Down
1. “It is ___ that is golden, not silence”: Samuel Butler : TACT
Samuel Butler was a British novelist and satirist. His best known novels are “Erewhon” (1872) and “The Way of All Flesh” (1903). Butler also made translations of Homer’s “Iliad” and “Odyssey” that are still widely used.

3. Article of apparel that often leaves one arm bare : SARI
The item of clothing called a “sari” (also “saree”) is a strip of cloth, as one might imagine, unusual perhaps in that is unstitched along the whole of its length. The strip of cloth can range from four to nine meters long (that’s a lot of material!). The sari is usually wrapped around the waist, then draped over the shoulder leaving the midriff bare. I must say, it can be a beautiful item of clothing.

7. Olajuwon of the N.B.A. : HAKEEM
Hakeem Olajuwon is a retired Nigerian American basketball player. Hakeem was born in Lagos in Nigeria, and came the US to play for the University of Houston. He was drafted by the Houston Rockets in 1984, ahead of the likes of Charles Barkley and Michael Jordan.

11. Lake connected with lake-effect snow : ERIE
Lake Erie is the fourth largest of the five Great Lakes by area (Lake Ontario is the smallest). The lake takes its name from the Erie tribe of Native Americans that used to live along its southern shore. Erie is the smallest of the Great Lakes by volume and the shallowest, something for which nearby residents must be quite grateful. Being relatively shallow, much of Erie freezes over part way through most winters putting an end to most of the lake-effect snow that falls in the snow belt extending from the lake’s edge.

22. Brand for weight-watchers : LEAN CUISINE
Lean Cuisine is a brand of frozen dinners that was created in 1981, introduced as a healthy, low-fat and low-calorie alternative to Stouffer’s frozen meals.

25. Caterpillar stage : LARVA
The larva is an intermediate stage in the development of an insect. All four stages are embryo, larva, pupa and imago.

26. Godlike, in a way : OMNISCIENT
“Omniscience” is the quality of having complete knowledge and awareness. The term comes from the Latin “omnis” meaning “all” and “scientia” meaning “knowledge”.

31. River through Nottingham, England : TRENT
The River Trent in England is one of the few rivers that flows north for much of its route. The Trent rises in Staffordshire and empties into the River Ouse in Yorkshire.

Nottingham is a city in the East Midlands of England. To outsiders, perhaps Nottingham is most famous for its links to the legend of Robin Hood.

59. Old typesetting machine, informally : LINO
Linotype printing was the main technology used in the publication of newspapers and magazines for most of the 20th century, up until the 1970s when it was gradually replaced by offset printing and computer typesetting. Linotype printing was so called as a complete “line of type” was produced at one time.

60. Pop of rock : IGGY
Iggy Pop is a punk rock performer from Muskegon, Michigan. When he was in high school, he was a drummer for a local band called the Iguanas, and so was given the nickname “Iggy”.