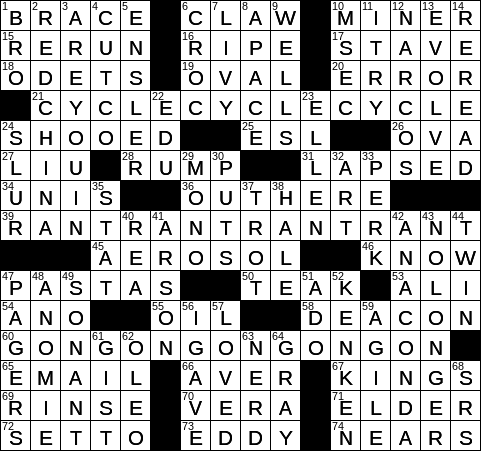 Today’s Wiki-est, Amazonian Googlies
Across
6. Crayfish feature : CLAW
Crayfish are freshwater crustaceans related to lobsters, and indeed look like small versions of their saltwater cousins. Crayfish are often referred to as “crawfish” and “crawdads”, especially in the south of the US.

17. Barrel part : STAVE
The word “stave” was originally the plural of “staff”, a wooden rod. To “stave off” originated with the concept of holding off with a staff. In the world of barrel-making, a stave is a narrow strip of wood that forms part of a barrel’s sides.

18. “Waiting for Lefty” playwright : ODETS
Clifford Odets was a playwright, screenwriter and director from Philadelphia. “Waiting for Lefty” was the first play by Clifford Odets that made it to stage, in 1935. The storyline deals with cab drivers who are planning a strike. Famously, the play breaks through the “fourth wall” by placing actors within the audience who react to the action taking place on the stage.

25. Night class subj. : ESL
English as a Second Language (ESL) is sometimes referred to as English for Speakers of Other Languages (ESOL) and English as a Foreign Language (EFL).

27. Sch. with campuses in Brooklyn and Brookville : LIU
Long Island University (LIU) in Brooklyn, New York is a private school that was chartered in 1926. LIU’s focus has always been on providing moderately-priced, effective education to people from all walks in life. To that end, LIU opened a second campus in 1951 in Brookville in the suburbs of New York City, recognizing the need to serve families that were living outside of the metropolis. The athletic teams of LIU’s Brooklyn campus are known as the Brooklyn Blackbirds, and the teams of the Brookville campus are called the Post Pioneers.

36. Present location, when visiting the boondocks : OUT HERE
“Boondocks” is a term used in North America for a remote, usually rural area. Often the term is used derogatively, implying that a remote location is unsophisticated. “Boondocks” was first used by American soldiers stationed in the Philippines in the early 1900s. The word evolved from the Tagalog “bundok” meaning “mountain”.

45. Secret application, perhaps : AEROSOL
Secret is an antiperspirant/deodorant made by Procter & Gamble, first introduced in 1956 as a cream that was applied with the fingers (ick!). There followed a roll-on version in 1958, a spray in 1964 and the solid stick in 1978.

46. “False face must hide what the false heart doth ___”: Macbeth : KNOW
There is a superstition in the theatrical world that uttering the name “Macbeth” in a theater will bring disaster of some sort. To avoid this, the euphemism “the Scottish Play” is used instead.

53. Laila of the ring : ALI
Laila Ali is the daughter of the great Muhammad Ali and is a very capable boxer in her own right. Laila’s professional record is an impressive 24 wins, including 21 knockouts. Now retired, she never lost a fight, and nor did she ever draw. One of those victories was against Jackie Frazier-Lyde, daughter of her father’s nemesis Joe Frazier. Laila is not a bad dancer either, coming in third place in the fourth season of “Dancing with the Stars”.

60. Military headquarters, literally : GON GON GON GON GON (i.e. PENTA-GON)
The incredible building known as the Pentagon was built during WWII, and dedicated on January 15, 1943. It is the largest office building in the world (by floor space) covering an area of about 6.5 million square feet. As it was built during the war years, a major requirement was that it use a minimum amount of steel. So the steel shortage dictated that the building be no more than four stories in height, covering an awful lot of real estate.

70. Designer Wang : VERA
Vera Wang’s first choice for a career was figure skating. Although she a very capable skater, Wang failed to make the 1968 US Olympics team. She switched to the world of fashion, and is now famous for her designs of wedding dresses … and also costumes for figure skaters.

Down
2. Cold War threat : RED CHINA
The association of the color red with communism dates back to the French Revolution. A red flag was chosen as a symbol by the revolutionaries, with the color representing the blood of workers who had died in the fight against capitalism.

The term “Cold War” was first used by the novelist George Orwell in a 1945 essay about the atomic bomb. Orwell described a world under threat of nuclear war as having a “peace that is no peace”, in a permanent state of “cold war”. The specific use of “cold war” to describe the tension between the Eastern bloc and the Western allies is attributed to a 1947 speech by Bernard Baruch, adviser to Presidents Woodrow Wilson and Franklin D. Roosevelt.

7. Early historian of ancient Rome : LIVY
Titus Livius (aka “Livy”) was a Roman historian who lived from 59 BC to AD 17. Livy wrote the definitive history of Rome at that time.

9. “The Shape of Things to Come” author : WELLS
The HG Wells science-fiction tale “The Shape of Things to Come”, written in 1933, predicts a global conflict (WWII) that breaks out in 1940 lasting for ten years, after which chaos reigns as no victor emerges. After worldwide plague, a benevolent dictatorship emerges and the world moves towards a serene utopia. In time, the dictators are overthrown and peacefully retired, and the people of the Earth live happily ever after. All are citizens of one global state, with its capital in Basra in the Middle East.

23. Popular afternoon talk show : ELLEN
Ellen DeGeneres is a very, very successful TV personality, having parlayed her career in stand-up comedy into lucrative gigs as an actress and talk show host. Back in 1997 DeGeneres chose the “Oprah Winfrey Show” to announce that she was a lesbian. Her character on “The Ellen Show” also came out as a lesbian in a scene with her therapist, who was played by Oprah Winfrey. Nice twist!

29. One-track : MONO
Monophonic sound (“mono”) is sound reproduced using just one audio channel, which is usually played out of just one speaker. Stereophonic sound is reproduced using two audio channels, with the sound from each channel played out of two different speakers. The pair of stereo speakers are usually positioned apart from each other so that sound appears to come from between the two. Quadraphonic sound (4.0 surround sound) uses four audio channels with the sound played back through four speakers often positioned at the corners of the room in which one is listening.

32. “The supreme ___ of war is to subdue the enemy without fighting”: Sun Tzu : ART
The Art of War(fare) is an ancient military text that is attributed to a high-ranking Chinese general called Sun Tzu. I’ve even seen the principles in Sun Tzu’s book applied to modern business.

38. In the pink : HALE
Both the words “hale” and “healthy” derive from the the Old English “hal” meaning healthy.

40. Actor Stephen : REA
Stephen Rea is an Irish actor from Belfast. Rea’s most successful role was Fergus in 1992’s “The Crying Game”, for which performance he was nominated for the Best Actor Oscar. In “The Crying Game”, Fergus was a member of the IRA. In real life, Rea was married to IRA bomber and hunger striker Dolours Price at the time he made the movie.

42. Amazon menace : ANACONDA
Anacondas are native to the tropical regions of South America. The green anaconda is one of the world’s largest snakes, growing to 17 feet long and weighing up to 215 pounds! Anacondas are not venomous, and prefer to kill their prey by coiling around it and then squeeeeeezing …

48. Severe malaise : ANOMIE
“Anomie” is social breakdown caused by the erosion of value and standards. The term comes to us via French from Greek. The root words are “a-” (without) “nomos” (law).

51. Kerfuffle : ADO
“Kerfuffle” comes from the Scottish “curfuffle”, with both words meaning “disruption”.

52. Popular puzzle invented in Japan : KENKEN
KenKen is an arithmetic and logic puzzle invented quite recently, in 2004 by a Japanese math teacher named Tetsuya Miyamoto. “Ken” is the Japanese word for “cleverness”.

59. Like “Dancing With the Stars” dancers : AGILE
When I was growing up in the British Isles, there was a surprisingly popular BBC television show featuring professional ballroom dancing called “Come Dancing”. It ran almost every year from 1949 to 1998, and in 2004 the BBC resurrected it with a new twist, adding celebrities to dance with the professionals. The new show, called “Strictly Come Dancing”, is a huge success and has become a worldwide franchise. Over here we watch the American version called “Dancing with the Stars”. It really is fun television …

62. Nondairy substitute : OLEO
Emperor Louis Napoleon III of France announced a competition to develop a substitute for butter, a substitute that would be more accessible to the lower classes and more practical for the armed forces. A French chemist called Hippolyte Mege-Mouries came up with something he called oleomargarine in 1869, which was eventually manufactured under the trade name “margarine”. The name “oleomargarine” also gives us our generic term “oleo”.

68. Most AARP members: Abbr. : SRS
AARP is now the official name for the interest group that used to be called the American Association of Retired Persons. The name change reflects the current focus of the group on all Americans aged 50 or over, as opposed to just people who have retired.