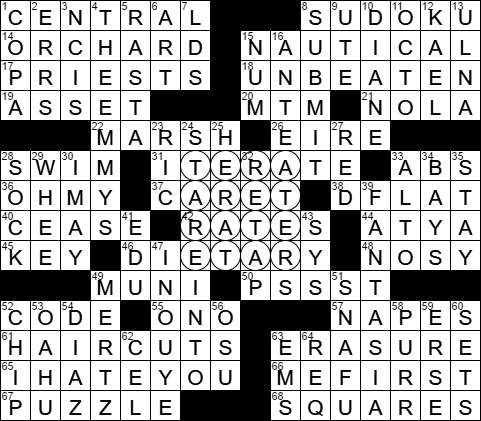 CROSSWORD CONSTRUCTOR: Todd Gross
THEME: Rate Square
Today’s grid features the letters RATE written in 8 different ways in a 4×4 square at the center in circled letters. Those eight different arrangements are included in eight answers in the puzzle. There are also a couple of other paired answers that reference the arrangement in the middle of the grid:

8A. With 67-Across, what the shaded part of this crossword represents : SUDOKU
67A. See 8-Across : PUZZLE

Today’s Wiki-est, Amazonian Googlies
Across
8. With 67-Across, what the shaded part of this crossword represents : SUDOKU
(67A. See 8-Across : PUZZLE)
Number puzzles similar to our modern-day Sudoku first appeared in French newspapers in the late 1800s. The format that we use today was created by Howard Garns, a 74-year-old freelance puzzle constructor from Connersville, Indiana and first published in 1979. The format was introduced in Japan in 1984 and given the title of “Sūji wa dokushin ni kagiru”, which translates to “the digits are limited to one occurrence”. The rather elaborate Japanese title was eventually shortened to Sudoku. No doubt many of you are fans of Sudoku puzzles. I know I am …

17. Eli and Aaron, in the Bible : PRIESTS
In the Bible, Eli is a High Priest of Shiloh, and the teacher of Samuel. As such, his story is told in the Book of Samuel. Eli had two sons, Hophni and Phinehas, both of whom are described as wicked. As a result of their wayward lifestyle, it is prophesied that all of Eli’s male descendents will die before reaching old age.

21. Home of The Times-Picayune, familiarly : NOLA
The city of New Orleans, Louisiana has the nickname “The Big Easy”. This name might come from the early 1900s when musicians found it relatively “easy” to find work there. The city is also known by the acronym NOLA, standing for New Orleans (NO), LA.

33. Core parts : ABS
The abdominal muscles (abs) are more correctly referred to as the rectus abdominis muscles. They are all called a “six-pack” in a person who has developed the muscles and who has low body fat. In my case, more like a keg …

37. Mark below a line : CARET
The character known as a caret was originally a proofreading mark, used to indicate where a punctuation mark was to be inserted. “Caret” is Latin for “it lacks”.

49. Certain bond, for short : MUNI
A municipal bond (muni) is one that is issued by a city or local government, or some similar agency. Munis have an advantage over other investments in that any interest earned on the bond is usually exempt from state and federal income taxes.

55. Hawaiian fish with a palindromic name : ONO
The wahoo is a cousin of the mackerel, and is known as the ono in Hawaii.

Down
1. Legendary N.Y.C. club, with “the” : COPA
The Copacabana of song is the Copacabana nightclub in New York City (which is also the subject of the Frank Sinatra song “Meet Me at the Copa”). The Copa opened in 1940 and is still going today although it is struggling. The club had to move due to impending construction and is now “sharing” a location with the Columbus 72 nightclub.

Her name was Lola, she was a showgirl
With yellow feathers in her hair and a dress cut down to there
She would merengue and do the cha-cha
And while she tried to be a star
Tony always tended bar
Across the crowded floor, they worked from 8 til 4
They were young and they had each other
Who could ask for more?

3. Long-running TV drama started in 2003 : NCIS
NCIS is the Naval Criminal Investigative Service, which investigates crimes in the U.S. Navy and Marine Corps. The service gives its name to the CBS TV show “NCIS”, a spin-off drama from “JAG” in which the main “NCIS” characters were first introduced. The big star in “NCIS” is the actor Mark Harmon. “NCIS” is now a franchise, with spinoff shows “NCIS: Los Angeles” and “NCIS: New Orleans”.

4. Annual September TV event : THE EMMYS
The Emmy Awards are the television equivalent of the Oscars from the world of film, the Grammy Awards in music and the Tony Awards for the stage. Emmy Awards are presented throughout the year, depending on the sector of television being honored. The most famous of these ceremonies are the Primetime Emmy Awards and the Daytime Emmy Awards. The distinctive name of “Emmy” is a softened version of the word “immy”, the nickname given to the video camera tubes found in old television cameras.

5. Believer in an Ethiopian Zion : RASTA
I must admit that I don’t really know much about Rastafarianism. I do know that a “Rasta”, like Bob Marley, is a follower of the movement. Some say that Rastafarianism is a religion, some not. I also know that it involves the worship of Emperor Haile Selassie I of Ethiopia.

6. “The enemy of ___ is the absence of limitations”: Orson Welles : ART
Orson Welles is perhaps best-remembered in the world of film for his role in 1941’s “Citizen Kane”. In the world of radio, Welles is known for 1938’s famous broadcast of “The War of the Worlds”, a broadcast that convinced many listeners that the Earth was indeed being invaded by aliens.

7. Church inits. : LDS
The Church of Jesus Christ of Latter-day Saints, often abbreviated to “LDS”, is known colloquially as the Mormon Church.

9. Tribe after which the 45th state is named : UTE
The Ute is a group of Native American tribes that now resides in Utah and Colorado. The Ute were not a unified people as such, but rather a loose association of nomadic groups. The word “Ute” means “Land of the Sun”, and “Ute” also gave us the state name “Utah”.

10. Steak ___ : DIANE
Steak Diane is pan-fried filet mignon served in a flambéed sauce made from the juices in the pan along with butter, shallots, cream and brandy. The dish is named after Diana, the Roman goddess of the hunt.

12. Longtime New Yorker writer Pauline : KAEL
Pauline Kael was a film critic who wrote for “The New Yorker” magazine from 1968 to 1991.

16. Animals whose tongues flick about 150 times a minute : ANTEATERS
Anteaters tear open ant and termite nests using their sharp claws and then eat up the eggs, larvae and mature ants using their tongues. They have very sticky saliva which coats the tongue hence making the feeding very efficient. The tongue also moves very quickly, flicking in and out of the mouth at about 150 times per minute.

23. Wrestler Flair : RIC
The wrestler Ric Flair’s real name is Richard Fliehr. Perhaps following the lead of his compatriot Jesse Ventura, Flair explored the possibility of running for governor of the state of North Carolina. Dearie, dearie me …

27. Cinnabar, e.g. : RED
Cinnabar is the ore from which mercury is extracted. It is a bright red or scarlet mineral in its natural form.

39. First commercial film with stereophonic sound, 1940 : FANTASIA
“Fantasia” was Disney’s third feature length movie, released in 1940. The film had a disappointing critical reception and pushed the Disney company into financial difficulties. RKO took over the film’s distribution in 1946. The folks at RKO cut a full hour off the running time and relaunched the movie into a successful run. If you haven’t seen “Fantasia”, I urge you to do so. It’s a real delight …

Monophonic sound (“mono”) is sound reproduced using just one audio channel, which is usually played out of just one speaker. Stereophonic sound is reproduced using two audio channels, with the sound from each channel played out of two different speakers. The pair of stereo speakers are usually positioned apart from each other so that sound appears to come from between the two. Quadraphonic sound (4.0 surround sound) uses four audio channels with the sound played back through four speakers often positioned at the corners of the room in which one is listening.

41. Lead-in to -tainment : EDU
The word “edutainment” describes educational entertainment, a work that is designed to both educate and to entertain. The Walt Disney Company was the first to embrace the term, using it to describe the “True-Life Adventures” series of films produced from 1948 to 1960.

47. Daniel ___, first Japanese-American to serve in Congress : INOUYE
Senator Daniel Inouye was a US Senator for the state of Hawaii and was the President pro tem of the Senate (the US Vice President is the President of the Senate). Given this role, he was the highest-ranking Japanese-American in the country’s history as he was third in the line of succession to the office of US President. Senator Inouye passed away in 2012. Honolulu’s airport was renamed to Daniel K. Inouye International Airport in 2017 in his honor.

49. “I Love Lucy” neighbor : MERTZ
In the hit television show “I Love Lucy”, Lucille Ball and Desi Arnaz play Lucy and Ricky Ricardo. The Ricardos’ best friends are also their landlords, Fred and Ethel Mertz. The Mertz’s are played by William Frawley and Vivian Vance.

51. Utter mess : SNAFU
SNAFU is an acronym standing for Situation Normal: All Fouled Up (well, that’s the “polite” version!). As one might perhaps imagine, the term developed in the US Army, during WWII.

53. Home of Pearl City : OAHU
Pearl City is located in Honolulu, along the north shore of Pearl Harbor.

54. Cameron of “Charlie’s Angels” : DIAZ
The Hollywood actress Cameron Diaz started out her professional life as a model. Diaz’s first acting role was in the 1994 film “The Mask”, starring alongside Jim Carrey.

“Charlie’s Angels” is a fun action movie from 2000 that is a spinoff from the iconic TV show of the same name from the seventies. The “Angels” in the movie version are Cameron Diaz, Drew Barrymore and Lucy Liu, with Bill Murray as John Bosley. John Forsythe provides the voice of the unseen “Charlie”, just as he did in the original television show.

56. Big Ten inits. : OSU
Ohio State University (OSU) was founded back in 1870 as the Ohio Agricultural and Mechanical College. The athletic teams of OSU are called the Buckeyes, named after the state tree of Ohio. In turn the buckeye tree gets its name from the appearance of its fruit, a dark nut with a light patch thought to resemble a “buck’s eye”.

The Big Ten is the nation’s oldest Division I college athletic conference and today is comprised of not ten, but twelve colleges mainly located in the Midwest. The conference was founded in 1896 and earned the name “Big Nine” in 1899 when Iowa and Indiana joined to bring the number of teams in the conference to nine. The conference name was changed to the Big Ten after Michigan rejoined in 1917. Right after WWII, the University of Chicago dropped out so the conference became known as the Big Nine again until 1949. The official designation of “Big Ten” was adopted in 1987 when the conference (once again with with a complement of ten teams) registered as a not-for-profit corporation. It was decided to keep the official name of Big Ten when Penn State joined in 1990 bringing the number of schools to the level of eleven, and even when the University of Nebraska-Lincoln joined in 2011 as the twelfth team.

60. You might give them props : SETS
That would in the world of acting.

62. Picture frame? : CEL
In the world of animation, a cel is a transparent sheet on which objects and characters are drawn. In the first half of the 20th century the sheet was actually made of celluloid, giving the “cel” its name.