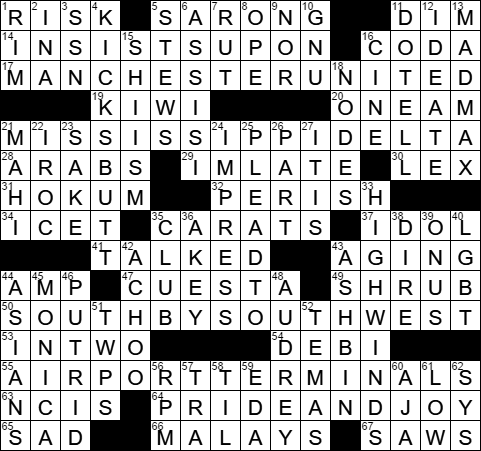 CROSSWORD CONSTRUCTOR: Jason Flinn
THEME: Airport Terminals
Each of today’s themed answers ends with (TERMINATES with) the name of an AIRLINE (which would be seen at an AIRPORT TERMINAL).

Today’s Wiki-est, Amazonian Googlies
Across
5. Attire that may leave the chest bare : SARONG
“Sarong” is the Malay word for “sheath”, and a sarong was originally the garment worn by Malay men and women around their waists. The Malay sarong is actually a tube of fabric, about a yard wide and two-and-a-half yards long. Many variations of the sarong are worn all over South Asia and the Pacific Islands. I had occasion to wear one in Hawaii many years ago, and found it very … freeing!

16. Concluding musical section : CODA
In music, a coda is primarily a passage that brings a movement to a conclusion. “Coda” is Italian for “tail”.

17. One of the premier clubs in the Premier League : MANCHESTER UNITED (giving “United Airlines”)
Manchester United is one of the most successful football (soccer) clubs in England, having won more League titles than any other in the history of the game. The club is also famous for a airplane crash known as the 1958 Munich air disaster. The British European flight crashed during takeoff resulting the death of 23 passengers, including eight members of the Manchester United team.

19. Native New Zealander : KIWI
Unlike many nicknames for people of a particular country, the name “Kiwi” for a New Zealander isn’t offensive at all. The term comes from the flightless bird called the kiwi, which is endemic to New Zealand and is the country’s national symbol. “Kiwi” is a Maori word, and the plural (when referring to the bird) is simply “kiwi”. However, when you have two or more New Zealanders with you, they are Kiwis (note the “s”, and indeed the capital “K”!).

21. Southern region where blues developed : MISSISSIPPI DELTA (giving “Delta Air Lines”)
A river delta is a triangular landform at the mouth of a river created by the deposition of sediment. The most famous “delta” in the United States isn’t actually a delta at all. The Mississippi Delta is an alluvial plain that lies 300 miles north of the river’s actual delta, which is known as the Mississippi River Delta. Very confusing …

28. Swift steeds : ARABS
The Arab (also “Arabian”) breed of horse takes its name from its original home, the Arabian Peninsula. Like any animal that humans have over-bred, the horse falls prey to genetic diseases, some of which are fatal and some of which require the horse to be euthanized.

30. Comics villain ___ Luthor : LEX
Lex Luthor is the arch-nemesis of Superman in comics. Luthor has been portrayed in a number of guises in the comic world as well in movies and on the small screen. For example, he appeared as Atom Man in the 1950 film series “Atom Man vs. Superman”, and was played by actor Lyle Talbot, opposite Kirk Alyn’s Superman.

“Applesauce” is slang for “nonsense, rubbish”. Never heard it used outside of crosswords …

34. “Law & Order: SVU” actor : ICE-T
Rapper Ice-T must be sick of having his name come up as an answer in crossword puzzles (I know I am!). Ice-T has been interested in acting for decades and made his film debut in the 1984 movie about breakdancing called “Breakin’”. He has also played Detective Fin Tutuola in the TV show “Law & Order: Special Victims Unit” since the year 2000.

35. Diamonds are weighed in them : CARATS
The carat is a unit of mass used in measuring gemstones that is equal to 200 mg.

37. Item swiped by Indiana Jones at the start of “Raiders of the Lost Ark” : IDOL
“Raiders of the Lost Ark” is, in my humble opinion, the best of the Indiana Jones franchise of movies. This first Indiana Jones film was released in 1981, produced by George Lucas and directed by Steven Spielberg. Harrison Ford was Spielberg’s first choice to play the lead, but Lucas resisted as he was concerned that he would be too closely associated with the actor (as Ford played Han Solo in “Star Wars”, and also appeared in Lucas’s “American Graffiti”). Tom Selleck was offered the role but he couldn’t get out of his commitments to “Magnum, P.I.” Eventually Spielberg got his way and Ford was hired, a good thing I say …

43. Gerontologist’s subject : AGING
Gerontology is the study of all aspects of aging, including the biology, psychology and sociology. Geriatrics is the study of diseases encountered in older adults.

50. Annual Austin festival : SOUTH BY SOUTHWEST (giving “Southwest Airlines”)
South by Southwest, also known as SXSW, is an annual festival that has been taking place in Austin, Texas since 1987. SXSW is a melded event, combining a music festival, a film festival and an interactive festival.

Southwest Airlines is the world’s largest low-cost passenger airline. I’ve always admired the Southwest operation and found that the company knows to keep costs under control while maintaining a high level of customer service. One strategy the company used for decades was only to operate Boeing 737 aircraft, which kept maintenance and operating costs to a minimum.

54. Actress Mazar of “Entourage” : DEBI
Debi Mazar plays Shauna Roberts on the HBO series “Entourage”. You might have seen her on “Dancing with the Stars” a while back, although she didn’t do so well and was eliminated in the third week.

63. CBS show with a “New Orleans” spinoff : NCIS
NCIS is the Naval Criminal Investigative Service, which investigates crimes in the U.S. Navy and Marine Corps. The service gives its name to the CBS TV show “NCIS”, a spin-off drama from “JAG” in which the main “NCIS” characters were first introduced. The big star in “NCIS” is the actor Mark Harmon. “NCIS” is now a franchise, with spinoff shows “NCIS: Los Angeles” and “NCIS: New Orleans”.

66. Indigenous people of Singapore : MALAYS
The Asian city-state of Singapore takes its name from the Malay word “Singapura” which means “Lion City”. However, lions in the wild never made it to Singapore, so the city is probably misnamed and perhaps should have been called “Tiger City”.

Down
1. Volcano feature : RIM
Our word “volcano” comes from “Vulcano”, the name of a volcanic island off the coast of Italy. The island’s name comes from Vulcan, the Roman god of fire. The Romans believed that the island of Vulcano was the chimney of the forge belonging to the god Vulcan. The Romans also believed that the eruptions on Mount Etna in Sicily were caused by Vulcan getting angry and working his forge so hard that sparks and smoke flew out of the top of the volcano.

Phishing is the name given to the online practice of stealing usernames, passwords and credit card details by creating a site that deceptively looks reliable and trustworthy. Phishers often send out safe-looking emails or instant messages that direct someone to an equally safe-looking website where the person might inadvertently enter sensitive information. “Phishing” is a play on the word “fishing”, as in “fishing for passwords, PIN numbers etc.”

5. Goulashes, e.g. : STEWS
Goulash is a soup or stew that is seasoned with spices, especially paprika. It is a national dish of Hungary, and the term “goulash” comes from the Hungarian word “gulyás”, which actually translates as “herdsman”. The original goulash was a meat dish prepared by herdsman.

6. Pilgrimage site in central Italy : ASSISI
The Italian town of Assisi is in Umbria. Assisi is famous as the birthplace of St. Francis and as the home to the Franciscan religious order. It was also the home to Saint Clare and her order of the Poor Sisters (later known as the Poor Clares).

10. Roamer of the Serengeti : GNU
A gnu is also known as a wildebeest, and is an antelope native to Africa. Wildebeest is actually the Dutch word for “wild beast”.

The Serengeti is a region in Africa, located in northern Tanzania and southwest Kenya. The name “Serengeti” comes from the Maasai language and means “Endless Plains”.

21. When repeated, Hawaiian menu item : MAHI
Mahi-mahi is the Hawaiian name for the dolphin-fish, also called a dorado. The mahi-mahi is an ugly looking creature if ever I saw one …

22. Classic Camaro : IROC
The IROC-Z is a model of Camaro that was introduced by Chevrolet in 1978. The IROC-Z takes its name from a famous stock car race, the International Race of Champions.

23. Sashimi go-with : SAKE
We refer to the Japanese alcoholic beverage made from rice as “sake”. We’ve gotten things a bit mixed up in the West. “Sake” is actually the word that the Japanese use for all alcoholic drinks. What we know as sake, we sometimes refer to as rice wine. Also, the starch in the rice is first converted to sugars that are then fermented into alcohol. This is more akin to a beer-brewing process than wine production, so the end product is really a rice “beer” rather than a rice “wine”.

27. “How sweet ___!” : IT IS
“How sweet it is!” was perhaps Jackie Gleason’s most famous catchphrase. Gleason grew up in Brooklyn, and drivers entering the borough today via the Brooklyn Bridge are greeted by a road sign announcing “How Sweet It Is!”

35. Sandwich usually served with toothpicks : CLUB
The club sandwich is a double-decker affair with three layers of bread and two layers of filling. This style of sandwich has been around since the end of the 19th century, and some say it was invented at an exclusive gambling “club” in Saratoga Springs, New York.

40. Like the group you’re in if you’re out, for short : LGBT
Lesbian, gay, bisexual and transgender (LGBT)

44. Dwellers east of the Urals : ASIANS
The eastern side of the Ural Mountains in Russia is generally regarded as the natural divide between the continents of Europe and Asia.

45. One of the friends on “Friends” : MONICA
Courteney Cox played Monica Geller on the incredibly successful sitcom “Friends”. Before “Friends” she played the girlfriend of Michael J. Fox’s character on “Family Ties” for a couple of years in the late eighties. Her role in “Friends” was her biggest success, no question, when she and her fellow female costars became the highest paid TV actresses ever, earning a million dollars per episode.

59. Author LeShan : EDA
Eda LeShan wrote several nonfiction books including “When Your Child Drives You Crazy” and “The Conspiracy Against Childhood”. LeShan was also host of the PBS television show “How Do Your Children Grow?”

60. 1977 Steely Dan album : AJA
Steely Dan’s heyday was in the seventies when they toured for a couple of years, although the group mainly focused on studio work. The band was formed in 1972 and broke up in 1981. The core of the band reunited in 1993 and they are still going strong today. Steely Dan’s best-selling album is “Aja” (pronounced “Asia”), which was released in 1977.