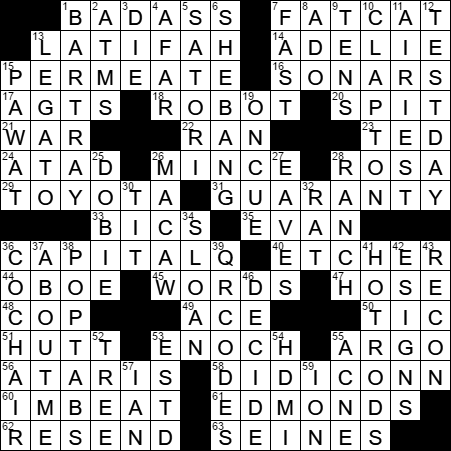 Today’s Wiki-est, Amazonian Googlies
Across
13. Queen of rap : LATIFAH
Queen Latifah is the stage name of the multitalented Dana Owens. The name “Latifah” is Arabic in origin and translates as “delicate, very kind”. Owens found the name and was attracted to it when she was just eight years old.

14. Penguin species : ADELIE
The Adélie penguin is found along the Antarctic coast, and are named after the Antarctic territory called Adélie Land that is claimed by France. Adélie Land was discovered by French explorer Jules Dumont D’Urville in 1840, and he named the territory after his wife Adéle.

16. They make waves in the ocean : SONARS
The British developed the first underwater detection system that used sound waves. Research was driven by defence demands during WWI, leading to production of working units in 1922. This new sound detection system was described as using “supersonics”, but for the purpose of secrecy the term was dropped in favor of an acronym. The work was done under the auspices of the Royal Navy’s Anti-Submarine Division, so ASD was combined with the IC from “superson-ic-s” to create the name ASDIC. The navy even went as far as renaming the quartz material at the heart of the technology “ASDivite”. By the time WWII came along, the Americans were producing their own systems and coined the term SONAR, playing off the related application, RADAR. And so the name ASDIC was deep-sixed …

18. Roomba, for one : ROBOT
The Roomba vacuum cleaner is a cool-looking device that navigates its way around a room by itself, picking up dirt as it goes. Like I said, it’s cool-looking but I am not sure how effective it is …

23. Bear in a 2012 film and its 2015 sequel : TED
“Ted” is a 2012 movie written, directed, produced and starring Seth MacFarlane. In the story, MacFarlane voices a somewhat irreverent teddy bear who is the best friend of a character played by Mark Wahlberg. The audiences liked the film, and “Ted 2” followed in 2015.

28. Parks who stood up for the right to sit down : ROSA
Rosa Parks was one of a few brave women in days gone by who refused to give up their seats on a bus to white women. It was the stand taken by Rosa Parks on December 1, 1955 that sparked the Montgomery, Alabama Bus Boycott. President Clinton presented Ms. Parks with the Presidential Medal of Freedom in 1996. When she died in 2005, Rosa Parks became the first ever woman to have her body lie in honor in the US Capitol Rotunda.

33. Certain lighters : BICS
Société Bic is a French company, based in Clichy in France. The first product the company produced, more than fifty years ago, was the Bic Cristal ballpoint pen that is still produced today. Bic also makes other disposable products such as lighters and razors.

“American Horror Story” is a TV series. I see the word “horror”, and so avoid it …

36. MapQuest feature : CAPITAL Q
MapQuest is a very popular Internet site, one that provides driving directions and maps. MapQuest has been owned by AOL since 2000. One nice feature of MapQuest is a page where gas prices are recorded by users, allowing others to find the lowest price in their area.

47. Scam : HOSE
The slang term “scam”, meaning a swindle, may come from the British slang “scamp”.

49. ___ acid : ACETIC
Acetic acid has the formula CH3COOH, and is the main component of vinegar.

51. Alien such as Jabba : HUTT
Jabba the Hutt is the big blob of an alien that appears in the “Star Wars” movie “The Return of the Jedi”. Jabba’s claim to fame is that he enslaved Princess Leia and kitted her out in that celebrated metal bikini.

53. Methuselah’s father : ENOCH
There are two Enoch’s mentioned in the Bible. One was Enoch the son of Cain, and grandson of Adam. The second was Enoch the great-grandfather of Noah, and father of Methuselah.

55. Best Picture partly adapted from a C.I.A. operative’s book : ARGO
“Argo” is a 2012 movie that is based on the true story of the rescue of six diplomats hiding out during the 1979 Iran hostage crisis. The film was directed by and stars Ben Affleck and is produced by Grant Heslov and George Clooney, the same pair who produced the excellent “Good Night, and Good Luck”. I saw “Argo” recently and recommend it highly, although I found the scenes of religious fervor pretty frightening …

56. Breakout consoles : ATARIS
Breakout is an Atari arcade game that was released in 1976. Breakout is really like a more complex version of Pong, and involves destroying a layer of bricks in the top third of the screen using a “ball” that is “batted” against the brick wall. I wasted a few hours playing Breakout back in the day …

61. Eight-time Gold Glove winner Jim : EDMONDS
The Gold Glove is an annual award given by Major League Baseball to the player judged to be the best in each fielding position in a season. The award was instituted in 1957 by the baseball glove manufacturer Rawlings.

63. Nets with weights : SEINES
A seine is a type of fishing net. It is long and thin, with floats along one long edge (the top) and weights along the bottom edge so that it hangs down in the water. A seine is usually paid out into the water from a boat called a seiner, as the vessel moves slowly in a circle driving fish into the center of the net.

4. “Our deeds still travel with us from ___, / And what we have been makes us what we are”: George Eliot : AFAR
George Eliot was the pen name of English novelist Mary Anne Evans. As one might think, Evans chose a male pen name in order that her work might be best appreciated in the Victorian era. Eliot wrote seven novels including “Adam Bede” (1859), “The Mill on the Floss” (1860), “Silas Marner” (1861) and “Middlemarch” (1871-72).

5. Zen enlightenment : SATORI
Satori is a Japanese term that is used in the Zen Buddhist tradition. Satori does not refer to full enlightenment (nirvana) but rather is a step along the way, a flash of awareness.

6. “Whole” amount : SHEBANG
The word “shebang” is probably a derivative of “shebeen”, an Irish word for a “speakeasy”, where liquor was drunk and sold illegally. In English “shebang” was originally a “hut” or a “shed”. Just how this evolved into the expression “the whole shebang”, meaning “everything”, is unclear.

13. Played smoothly : LEGATO
Staccato is a musical direction signifying that notes should be played in a disconnected form. The opposite of staccato would be legato, long and continuous notes played very smoothly.

25. “The Many Loves of ___ Gillis” : DOBIE
“The Many Loves of Dobie Gillis” is a sitcom that aired from 1959 to 1963 with Dwayne Hickman playing the title character. The show was based on a collection of short stories of the same name by Max Shulman. The Shulman stories had also inspired a movie back in 1953 called “The Affairs of Dobie Gillis” starring Debbie Reynolds and Bobby Van.

26. Relative of a cockatoo : MACAW
Macaws are beautifully colored birds of native to Central and South America, and are actually a type of parrot. Most species of macaw are now endangered, with several having become extinct in recent decades. The main threats are deforestation and illegal trapping and trafficking of exotic birds.

28. Dressing choice : RANCH
Ranch dressing has been the best selling salad dressing in the country since 1992. The recipe was developed by Steve Henson who introduced it in the fifties to guests on his dude ranch, Hidden Valley Ranch in Northern California. His ranch dressing became so popular that he opened a factory to produce packets of ranch seasoning that could be mixed with mayonnaise and buttermilk. Henson sold the brand for $8 million in 1972.

30. Red hair tint : TITIAN
The shade of red known as “titian” is named for the Italian Renaissance painter Titian, who often painted women with red hair.

38. Soda can features : POP TABS
The oldest method of opening a can with a device included in the can’s design is the pull-tab or ring pull, invented in Canada in 1956. The design was long-lived but it had its problems, so the world heaved a sigh of relief with the invention of the stay-on-tab in 1975. The new design led to less injuries and eliminated all those used pull-tabs that littered the streets.

39. Scannable black-and-white boxes : QR CODES
A QR Code (for “Quick Response Code”) is a two-dimensional barcode that is favored over UPC barcodes as it can read more quickly and can store much more information. The QR Code comprises black squares within a square grid on a white background.

41. They have souped-up engines : HOT RODS
A hot rod is an American car that has been modified for speed by installing a larger than normal engine. A street rod is generally a more comfortable type of hot rod, with the emphasis less on the engine and more on custom paint jobs and interiors. By definition, a street rod must be based on an automobile design that originated prior to 1949

52. Sequoia, e.g. : TREE
The giant sequoia tree is also known as the giant redwood. There’s only one part of the world where you can see giant sequoias growing naturally, and that’s on the western slopes of the Sierra Nevada mountain range in California. However, there are plenty of examples of giant sequoias that have been planted as ornamentals all over the world.

57. John, in Scotland : IAN
The name “John” translates into Scottish as “Ian”, into Russian as “Ivan”, into Italian as “Giovanni”, and into Irish as “Seán”.

59. Na+ or Cl- : ION
Sodium chloride (NaCl, common salt) is an ionic compound, a crystal lattice made up of large chloride (Cl) ions in a cubic structure, with smaller sodium (Na) ions in between the chlorides.