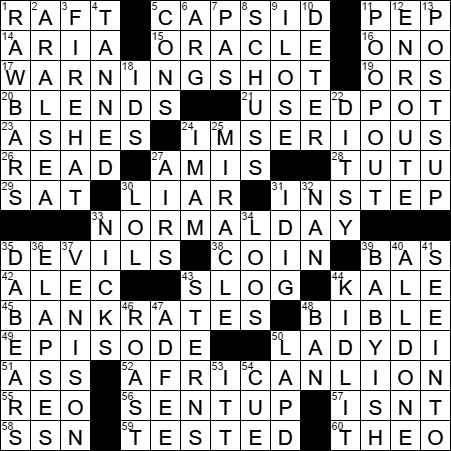 CROSSWORD CONSTRUCTOR: Peter Gordon
THEME: State + Letter Anagrams
Each of today’s themed answers is an anagram of a US state name plus one letter, as called out in the clue:

15. Futures analyst? : ORACLE
In Ancient Greece and Rome, an oracle was someone believed inspired by the gods to give wise counsel. The word “oracle” derives from the Latin “orare” meaning “to speak”, which is the same root for our word “orator”.

16. Famous Tokyo-born singer : ONO
Yoko Ono was born in 1933 in Tokyo into a prosperous Japanese family, and is actually a descendant of one of the emperors of Japan. Yoko’s father moved around the world for work, and she lived the first few years of her life in San Francisco. The family returned to Japan, before moving on to New York, Hanoi and back to Japan just before WWII, in time to live through the great fire-bombing of Tokyo in 1945. Immediately after the war the family was far from prosperous. While Yoko’s father was being held in a prison camp in Vietnam, her mother had to resort to begging and bartering to feed her children. When her father was repatriated, life started to return to normal and Yoko was able to attend university. She was the first woman to be accepted into the philosophy program of Gakushuin University.

23. Word repeated in “Ring Around the Rosy” before “We all fall down” : ASHES
“Ring a Ring o’ Roses” is a nursery rhyme that I well remember from my childhood.

Ring-a-ring o’ roses,
A pocket full of posies,
A-tishoo! A-tishoo!
We all fall down.

The lyrics tend to be a little different over here in North America:

Ring-a-round the rosie,
A pocket full of posies,
Ashes! Ashes!
We all fall down.

There’s an urban legend that the rhyme refers to the Great Plague that struck England in 1665. The inference is that “ring o’roses” is a rosy rash, and that “posies” of herbs were carried to ward off the disease. Victims would sneeze “a-tishoo” and “all fall down” dead.

27. Martin who wrote “London Fields” : AMIS
I suppose the successful English novelist Martin Amis must have writing in his blood. He is the son of the respected author Kingsley Amis, a Booker Prize winner. Martin Amis’s best-known novels are his so-called “London Trilogy” consisting of “Money” (1984), “London Fields” (1989) and “The Information” (1995).

28. Short dance wear : TUTU
The word “tutu”, used for a ballet dancer’s skirt, is actually a somewhat “naughty” term. It came into English from French in the early 20th century. The French “tutu” is an alteration of the word “cucu”, a childish word meaning “bottom, backside”.

38. Sacagawea dollar, e.g. : COIN
Sacagawea was the Shoshone guide who accompanied Lewis and Clark on their famous expedition. She was hired as a guide along with her husband, a French-Canadian trapper named Toussaint Charbonneau. When the expedition set out, Sacagawea was pregnant and had her child on the journey, in early 1805. Three years after the journey ended, Charbonneau and his family settled in St. Louis, Missouri where Sacagawea died in 1812. Sacagawea’s image is found on a US dollar coin that was first minted in 2000. The coin has a copper core clad with manganese brass, so it has a golden color.

39. ___-relief : BAS
In bas-relief, an image projects just a little above the background, as in perhaps a head depicted on a coin.

42. Evelyn Waugh’s writer brother : ALEC
Alec Waugh was the older brother of the more famous Evelyn Waugh. Both were successful novelists (Evelyn of “Brideshead Revisited” fame), but what I like about Alec is that he supposedly invented the cocktail party. He invited his friends around “for tea” in the twenties, and served them all rum swizzles instead!

45. NEBRASKA + T = Mortgage specifications : BANK RATES
Our word “mortgage” comes from the Old French “mort gaige” which translated as “dead pledge”. Such an arrangement was so called because the “pledge” to repay “dies” when the debt is cleared.

49. Segment of a binge-watch : EPISODE
I’m a big fan of binge-watching, the practice of watching perhaps two or three (even four!) episodes of a show in a row. My wife and I will often deliberately avoid watching a recommended show live, and instead wait until whole series have been released on DVD or online. I’m not a big fan of “tune in next week …”

50. Prince William’s mom : LADY DI
Charles, Prince of Wales married Lady Diana Spencer in 1981 at St. Paul’s Cathedral in London. The wedding was a huge television event, with about 750 million people tuning in worldwide. Although the event was billed as a fairytale wedding, the couple separated in 1992 and divorced in 1996.

Phishing is the name given to the online practice of stealing usernames, passwords and credit card details by creating a site that deceptively looks reliable and trustworthy. Phishers often send out safe-looking emails or instant messages that direct someone to an equally safe-looking website where the person might inadvertently enter sensitive information. “Phishing” is a play on the word “fishing”, as in “fishing for passwords, PIN numbers etc.”

60. “Divergent” actor James : THEO
“The Divergent Series” of movies is based on the “Divergent” novels written by Veronica Roth. The movies and novels are set in a post-apocalyptic version of Chicago called the Divergent Universe. The story is about a citizenry that is divided into five different factions based on personality traits. The critics weren’t crazy about the first movie in the series, but I really enjoyed it …

Down
2. Victim of river diversion in Asia : ARAL SEA
The Aral Sea is a great example of how man can have a devastating effect on his environment. In the early sixties the Aral Sea covered 68,000 square miles of Central Asia. Soviet Union irrigation projects drained the lake to such an extent that today the total area is less than 7,000 square miles, with 90% of the lake now completely dry. Sad …

6. S. Amer. home of the tango : ARG
The dramatic dance called the tango originated in the late 1800s in the area along the border between Argentina and Uruguay. Dancers and orchestras from Buenos Aires in particular traveled to Europe and beyond in the early twentieth century and brought the tango with them. The tango craze first struck Europe in Paris in the 1910s, and from there spread to London and Berlin, crossing the Atlantic to New York in 1913.

8. Straight downhill run on skis : SCHUSS
A schuss is a very fast run downhill in skiing, not taking any turns to slow the pace of the descent. “Schuss” is a German word for “shot”.

32. A Bobbsey twin : NAN
The “Bobbsey Twins” series of children’s novels was first written by Edward Stratemeyer in 1904. Stratemeyer used the pseudonym Laura Lee Hope, as did subsequent authors who wrote 72 books in the series between 1904 and 1979. The title characters are two sets of fraternal twins, one called Bert and Nan (who are 12) and the other called Flossie and Freddie (who are 6).

34. English johns : LOOS
It has been suggested that the British term “loo” comes from Waterloo (water-closet … water-loo), but no one seems to know for sure. Another suggestion is that the term comes from the card game of “lanterloo”, in which the pot was called the loo!

The use of “john” as a slang term for a toilet is peculiar to North America. “John” probably comes from the older slang term of “jack” or “jakes” that had been around since the 16th century. In Ireland, in cruder moments, we still refer to a toilet as “the jacks”.

35. Chicago squad in old “S.N.L.” skits : DA BEARS
The Chicago Bears were founded in Decatur, Illinois in 1919 and moved to Chicago in 1921. The Bears are one of only two franchises in the NFL that were around at the time of the NFL’s founding (the other is the Arizona Cardinals, who were also based in Chicago in 1921).

37. Hunter’s freezerful, maybe : VENISON
Venison is the meat of a deer. In days of yore, the term applied not just to deer, but to any large game. The word “venison” ultimately derives from the Latin “venare” meaning “to hunt”.

44. “Curious George” books, e.g. : KID LIT
Curious George is a character in a series of children’s books written by Hans Augusto and Margret Rey. The couple wrote the original stories in Paris, taking the manuscripts with them as they fled from the city ahead of the Nazi invasion in 1940.

50. SoCal force : LAPD
The Los Angeles Police Department (LAPD) is the third largest local law enforcement agency in the country, after New York PD and Chicago PD. Among other things, LAPD is famous for creating the first Special Weapons and Tactics (SWAT) team in the US, in 1965.

53. Big inits. in the aerospace industry : ITT
International Telephone & Telegraph (ITT) was formed in 1920 from the Puerto Rico Telephone Company. ITT divested its telecommunications business in 1986, today the company is known for its products in the field of water and fluids management, as well motion and flow control. Many of ITT’s products are sold into the aerospace market.