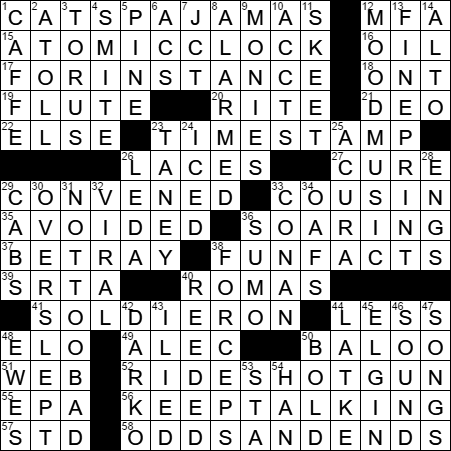 Today’s Wiki-est, Amazonian Googlies
Across
1. Living end : CAT’S PAJAMAS
There was a whole series of phrases involving animals that developed in the 1920s, all designed to indicate a superlative. Some are still around today, such as “the cat’s pajamas” and “the bee’s knees”. Others didn’t last too long, e.g. “the eel’s ankle” and “the snake’s hip”.

15. What doesn’t have a second to lose? : ATOMIC CLOCK
An atomic clock is the most accurate way of keeping track of time that is known. Most clocks work using some sort of an oscillation that takes place at a regular interval, like a pendulum. In the case of an atomic clock, the oscillation that is measured is between the nucleus of an atom and its surrounding electrons.

16. Cruet contents : OIL
A cruet is a small glass bottle for holding a condiment or perhaps a dressing. The word “cruet” comes from the Old French word for an earthen pot.

18. Neighbor of N.Y. : ONT
The Canadian province of Ontario takes its name from the Great Lake. In turn, Lake Ontario’s name is thought to be derived from “Ontari:io”, a Huron word meaning “great lake”. Ontario is home to the nation’s capital of Ottawa as well as Toronto, Canada’s most populous city (and the capital of the province).

26. Puma parts : LACES
Puma is a German company that sells athletic shoes worldwide. The company is most famous for its line of soccer boots.

27. Quinine, for malaria : CURE
Malaria is a disease passed onto humans by mosquitoes. As a result of the disease, a parasite invades human red blood cells and multiplies causing fever and possibly coma or death. Over 750,000 people died from malaria in 2009, out of 225 million cases reported.

38. Amusing bits of trivia : FUN FACTS
Trivia are things of little consequence. “Trivia” is the plural of the Latin word “trivium” which means “a place where three roads meet”. Now that’s what I call a trivial fact …

40. Some plum tomatoes : ROMAS
The Roma tomato isn’t considered an heirloom variety, but it is very popular with home gardeners, especially those gardeners that don’t have a lot of space. It is a bush type (as opposed to vine type) and needs very little room to provide a lot of tomatoes.

48. “Strange Magic” band, for short : ELO
The Electric Light Orchestra (ELO) is a symphonic rock group from the north of England.

49. Smart ___ : ALEC
Apparently the original “smart Alec” (sometimes “Aleck”) was Alec Hoag, a pimp, thief and confidence trickster who plied his trade in New York City in the 1840s.

50. Bear in “The Jungle Book” : BALOO
“The Jungle Book” by Rudyard Kipling was originally published in 1894, and is a collection of adventure stories or fables featuring the animals of the jungle and a young boy called Mowgli. Baloo is a sloth bear who teaches the cubs of a wolf pack the Law of the Jungle. His most challenging pupil however is no lupine, but rather the man-cub Mowgli.

55. Org. that promotes Energy Star Day : EPA
The Energy Star standard was created by the Environmental Protection Agency (EPA) during the Clinton Administration. In general, an item marked with an Energy Star uses 20-30% less energy than that mandated by federal standards. We just put an Energy Star roof on our house, and I am looking forward to seeing if the home stays cooler this summer.

58. Miscellany : ODDS AND ENDS
Out terms “miscellany” and “miscellaneous” ultimately come from the Latin verb “miscere” meaning “to mix”.

Down
1. ___ mocha : CAFFE
Mocha is a port city in Yemen on the Red Sea and was once the principal port for the capital city of Sana’a. Mocha was the major marketplace in the world for coffee until the 1600s, and gave its name to the Mocha coffee bean, which in turn gave it’s name to the mocha brown color, and to the flavor of coffee infused with chocolate.

2. Something ring-shaped : ATOLL
An atoll is a coral island that is shaped in a ring and enclosing a lagoon. There is still some debate as to how an atoll forms, but a theory proposed by Charles Darwin while on his famous voyage aboard HMS Beagle still holds sway. Basically an atoll was once a volcanic island that had subsided and fallen into the sea. The coastline of the island is home to coral growth which persists even as the island continues to subside internal to the circling coral reef.

3. Something ring-shaped : TORUS
A torus (plural “tori”) is a shape resembling a doughnut.

4. Bible belt? : SMITE
“To smite” is to strike with a firm blow. The term can also mean to strike down and slay.

23. Chief justice in the Dred Scott verdict : TANEY
Roger B. Taney was Chief Justice of the US Supreme Court from 1836 until 1864 (when he passed away). Taney’s most notable decision was in the case of Dred Scott v. Sandford, in which he delivered the majority opinion that African Americans could not be considered citizens of the US. Taney was the second-longest serving Chief Justice (Chief Justice John Marshall served for 34 years, from 1801 to 1835).

The landmark case of Dred Scott vs. Sandford came before the US Supreme Court in 1857. Scott had been born a slave, but lived with his owner in a free state for several years before returning to the slave state of Missouri. Scott’s argument was that living in a free state entitled him to emancipation. A divided US Supreme Court sided with Scott’s owner John Sandford. The decision was that no African American, free or enslaved, was entitled to US citizenship and therefore Scott was unable to petition the court for his freedom. The decision heightened tensions between the North and South, and the American Civil War erupted just three years later.

26. Mother of Helen of Troy : LEDA
In Greek mythology, Leda was the beautiful Queen of Sparta who was seduced by Zeus when he took the form of a swan. Leda produced two eggs from the union. One egg hatched into the beautiful Helen, later to be known as Helen of Troy and over whom was fought the Trojan War. The other egg hatched into the twins Castor and Pollux. Castor and Pollux had different fathers according to the myth. Pollux was the son of Zeus and was immortal, while Castor was the son of Leda’s earthly husband, and so he was a mortal. In the world of the arts, William Butler Yeats wrote a famous sonnet called “Leda and the Swan” in 1924, and Peter Paul Rubens made a copy of a now-lost painting called “Leda and the Swan” by Michelangelo.

28. Some Caltech alums: Abbr. : ENGS
Caltech is more properly known as the California Institute of Technology, and is a private research-oriented school in Pasadena. One of Caltech’s responsibilities is the management and operation of NASA’s Jet Propulsion Laboratory. If you watch “The Big Bang Theory” on television like me, you might know that the four lead characters all work at Caltech.

33. Talk show hosted by a Harvard grad : CONAN
Before Conan O’Brien came to fame as a late night talk show host he was a writer. He wrote for both “Saturday Night Live” and “The Simpsons”.

36. Sport for rikishi : SUMO
“Rikishi” is the term used for a sumo wrestler. “Rikishi” translates from Japanese as “strong man”.

40. Like clarinets : REEDED
The clarinet is a lovely-sounding instrument, isn’t it? The name comes from the Italian word “clarino” meaning “trumpet” with the “-et” suffix indicating “small”.

44. Hanukkah serving : LATKE
A latke is a delicious potato pancake (I’m Irish … so anything made with potato is delicious!).

45. The ___ Marbles (British Museum holding) : ELGIN
A frieze is an architectural feature found in many Roman and Greek buildings. Inside a room, frieze is the name given to the upper part of the wall, between the picture rail and the crown molding. Outside of a room, the term frieze is the name given to any extended decoration that is positioned above eye level. Perhaps the most famous frieze comes from the Parthenon in Athens. Over a third of this highly decorated feature was removed from Athens and taken to London in the early 1800s by the Earl of Elgin, where they remain on display in the British Museum. These famous “Elgin Marbles” are subject of much controversy as the legality of the removal is in dispute.

48. Feta sources : EWES
Feta is a Greek cheese made from sheep’s milk, or a mixture of sheep’s and goat’s milk. The cheese is salted and cured in a brine solution for several months before it is eaten.

53. Victoria, e.g.: Abbr. : STA
The most famous Victoria Station is in London, England.

54. River or dynasty name : HAN
The Han River that runs through the South Korean capital of Seoul used to be known as the Hanshui, a name that is sometimes still used today.