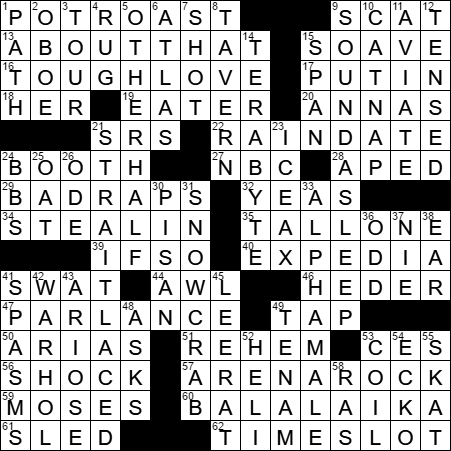 Today’s Wiki-est, Amazonian Googlies
Across
9. Order to go : SCAT
Our word “scat”, meaning “get lost!” comes from a 19th-century expression “quicker than s’cat”, which meant “in a great hurry”. The original phrase probably came from the words “hiss” and “cat”.

15. Verona vino : SOAVE
Soave is a dry white wine produced in the area around the city of Verona in northeast Italy.

17. World leader who’s a judo master : PUTIN
Vladimir Putin became acting President of Russia at the very end of 1999 when Boris Yeltsin resigned. Putin was elected in his own right in 2000, re-elected in 2004, and then ran up against a term limit in 2008. In 2008 Putin was appointed by his successor, President Dmitry Medvedev, to the position of Prime Minister. Putin is a controversial figure, inside and outside Russia. On the one hand he led the country out of an economic crisis into a period of stability and relative prosperity. On the other hand he has been associated with government corruption and accused of allowing private concerns to have undue influence on government actions. And then, along came the 2016 US presidential election …

20. Kendrick and Paquin : ANNAS
Anna Kendrick is a marvelous actress whose big break came when she played the sidekick to George Clooney’s character in the very interesting 2009 film “Up in the Air”. Kendrick can sing as well as act, and played a student a cappella singer in the 2012 movie “Pitch Perfect”.

27. “The Blacklist” network : NBC
“The Blacklist” is an entertaining, albeit a little formulaic, crime drama TV show starring James Spader and Megan Boone. Spader plays a successful criminal who surrenders to the FBI in order to help catch a “blacklist” of high-profile criminals.

29. Some long sentences : BAD RAPS
A rap sheet is a criminal record. “Rap” is a slang term dating back to the 1700s that means “blame, responsibility” as in “to take the rap”, “bad rap” and “to beat the rap”. This usage morphed into “rap sheet” in the early 1900s.

40. Kayak alternative : EXPEDIA
Expedia is one of the largest Internet-based travel companies, and has a site where you can book airline tickets and reserve hotel rooms and rental cars. I use Expedia a lot because I am an AARP member, and the AARP Travel website is powered by the Expedia search engine. In my travels I’ve found by comparison shopping that the AARP Travel site often has the best prices for hotel rooms.

KAYAK is a travel search engine that was founded in 2004 and has been owned by the Priceline Group since 2012.

46. “Napoleon Dynamite” star Jon : HEDER
“Napoleon Dynamite” is a comedy film released in 2004 that stars Jon Heder in the title role. The movie was a commercial success above and beyond expectations. “Napoleon Dynamite” was made on the relatively low budget of about $400,000, and yet grossed almost $45 million within a year. The title character is a nerdy high school student who spends much of life living in his fantasy world.

49. Bud source, perhaps : TAP
The American beer called Budweiser (often shortened to “Bud”) is named for the Czech town of Budweis (“České Budějovice” in Czech). The name is the subject of a dispute as here is an original Czech beer with a similar name, Budweiser Budvar. American Budweiser is sold in most European countries as “Bud”.

50. 16 things in “Don Giovanni” : ARIAS
“Don Giovanni” is a comic opera by Mozart, with the libretto in Italian by Lorenzo Da Ponte. The opera follows the adventures of Don Giovanni, a young rakish nobleman who finally comes to a bad end.

53. These, in Toulouse : CES
Toulouse is the fourth largest city in France, and is located in the southwest of the country. These days, Toulouse is noted as home to the Airbus headquarters and is known as the center of the European aerospace industry.

57. Foreigner’s genre : ARENA ROCK
“Arena rock” (also “stadium rock”) is a rock music played in large arenas. It is a phenomenon that dates back to the British Invasion when successful bands like the Beatles played to large audiences in places such as Shea Stadium in New York.

59. Ancient mountain climber : MOSES
According to the Book of Exodus, God inscribed the Ten Commandments on two stone tablets and gave them to Moses on Mount Sinai.

60. Instrument with a three-sided body : BALALAIKA
A balalaika is a stringed instrument from Russia. It has a neck with three strings, and a triangular body. They come in various sizes, from the rare “piccolo” variety to the very large “contrabasso” balalaika which is so heavy it has to be supported by extension legs that rest on the ground.

Down
2. Instrument with octave keys : OBOE
The oboe is perhaps my favorite of the reed instruments. The name “oboe” comes from the French “hautbois” which means “high wood”. When you hear an orchestra tuning before a performance you’ll note (pun intended!) that the oboe starts off the process by playing an “A”. The rest of the musicians in turn tune to that oboe’s “A”.

8. Place where people make the rounds? : TAVERN
Our lovely word “tavern” comes into English via Old French, from the Latin “taberna”, the word for a “shop, inn, alehouse”.

11. Play an ace? : AVIATE
A flying ace is an aviator who has shot down a number of enemy planes during combat. The qualifying number of kills seems to vary, but five is common. The first use of “ace” was during WWI when the French newspapers dubbed pilot Adolphe Pegoud “l’as” (French for “the ace”) when he shot down his fifth German plane.

21. Very conservative : STRAIT-LACED
Our term “strait-laced” is used to describe someone who is “excessively inflexible in matters of conduct”. Note the spelling “strait” (and not “straight”), which in this case means “tight”, and is a reference to the laces of a woman’s corset. A woman with a strait-laced (tightly laced) corset would have a rigid posture. This usage was extended to the figurative meaning of “rigid in conduct”.

25. Muesli morsel : OAT
“Muesli” is a Swiss-German term describing a breakfast serving of oats, nuts, fruit and milk. “Muesli” is a diminutive of the German word “Mues” meaning “puree”. Delicious …

26. One begins “Thou still unravish’d bride of quietness” : ODE
Here’s the first verse of the poem “Ode on a Grecian Urn” by John Keats:

30. Fibonacci, by birth : PISAN
Leonardo of Pisa was a famous and respected Italian mathematician, also known as simply “Fibonacci”. He is remembered for writing about a number sequence (although he didn’t “discover” it) that later was given the name “Fibonacci sequence”. He wrote about the series of numbers in his book called “Liber Abaci”, a celebrated work that introduced Arabic numerals (i.e. 0-9) to the Western world.

“Deadliest Catch” is yet another reality show, although this one is perhaps worth a look. It is produced for the Discovery Channel and deals with the exciting life on board fishing boats in the Bering Sea.

38. Piece in Mr. Potato Head : EAR
Mr. Potato Head is an enduring popular toy that has been around since its invention by George Lerner in 1949. In its original form, the toy was a collection of eyes, ears, and other facial features, that were designed to be stuck into a real potato. Mr. Potato Head also has the distinction of being the first toy ever to be advertised on television.

42. Creator of the 1966 underground film “Chelsea Girls” : WARHOL
American artist Andy Warhol was a leader in the pop art movement that emerged in the mid-1950s. Many of his works became the most expensive paintings ever sold. A 1963 Warhol canvas titled “Silver Car Crash (Double Disaster)” fetched over 100 million dollars in 2013.

53. “When we have shuffled off this mortal ___”: Hamlet : COIL
Here are some lines from the famous “To be, or not to be” soliloquy from William Shakespeare’s “Hamlet”.

For in that sleep of death what dreams may come
When we have shuffled off this mortal coil,
Must give us pause: there’s the respect
That makes calamity of so long life.

54. Fashion designer Marc : ECKO
Marc Ecko is a fashion designer from New Jersey. Marc was born Marc Milecofsky. In college, he became a fan of graffiti and used the name “Ecko” to tag his drawings.

55. Game in which sevens are low : SKAT
When I was a teenager in Ireland, I had a friend with a German father. The father taught us the game of Skat, and what a great game it is. Skat originated in Germany in the 1800s and is to this day the most popular card game in the country. I haven’t played it in decades, but would love to play it again …

58. Aides at M.I.T. and U.S.C. : RAS
RAs are resident assistants or resident advisers, the peer leaders found in residence halls, particularly on a college campus.