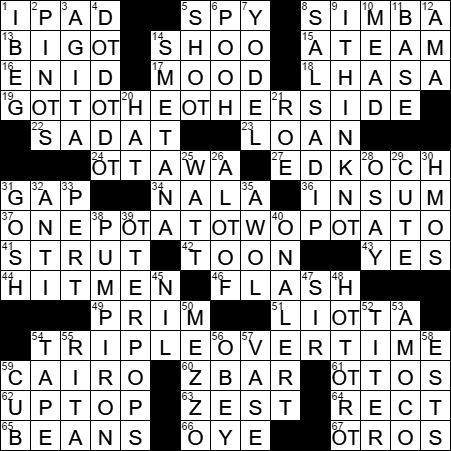 CROSSWORD SETTER: Michael Shteyman
THEME: Triple Overtime
We have a rebus puzzle today, with a TRIPLE OVERTIME in each themed answer, three occurrences of the letters OT in single squares:

19A. Made it across : GOT TO THE OTHER SIDE
37A. Start of a counting rhyme : ONE POTATO, TWO POTATO
4D. Continuation indication : DOT DOT DOT
48D. Eager : HOT TO TROT

Today’s Wiki-est, Amazonian Googlies
Across
1. Popular tablet : IPAD
The groundbreaking iPad was introduced by Apple in 2010. The iOS-based iPads dominated the market for tablet computers until 2013, when Android-based tablets (manufactured by several companies) took over the number-one spot.

8. Famous feline of film : SIMBA
Among the group of lions at the center of “The Lion King” story, young Simba is the heir apparent, the lion cub destined to take over as leader of the pride. His uncle is jealous of Simba, and plots with a trio of hyenas to kill Simba, so that he can take his position. The uncle was originally named Taka (according to books) but he was given the name Scar after being injured by a buffalo. The trio of hyenas are called Shenzi, Banzai and Ed.

13. Close-minded sort : BIGOT
“Bigot” is a French word that back in the late 1500s meant “sanctimonious person, religious hypocrite”. We use the term today to describe someone who is biased towards his or her own group, and who is intolerant of those outside of that group.

16. It’s an OK city : ENID
Enid, Oklahoma takes its name from the old railroad station around which the city developed. Back in 1889, that train stop was called Skeleton Station. An official who didn’t like the name changed it to Enid Station, using a character from Alfred Lord Tennyson’s “Idylls of the King”. Maybe if he hadn’t changed the name, the city of Enid would now be called Skeleton, Oklahoma! Enid has the nickname “Queen Wheat City” because is has a huge capacity for storing grain, the third largest grain storage capacity in the world.

17. What an emoji might indicate : MOOD
An emoji is a character found on many cell phones now that is much like an emoticon, but more elaborate.

18. Capital more than two miles above sea level : LHASA
Lhasa is the capital city of Tibet, and the name “Lhasa” translates as “place of the gods”. However, Lhasa used to be called Rasa, a name that translates into the less auspicious “goat’s place”. Lhasa was also once called the “Forbidden City” due to its inaccessible location high in the Himalayas and a traditional hostility exhibited by residents to outsiders. The “forbidden” nature of the city has been reinforced since the Chinese took over Tibet in the early 1950s as it has been difficult for foreigners to get permission to visit Lhasa.

22. 1970s North African leader : SADAT
Anwar Sadat was the third President of Egypt right up to the time of his assassination in 1981. Sadat won the Nobel Peace Prize in 1978 along with Israeli Prime Minister Menachem Begin for the role played in crafting the Israel-Egypt Peace Treaty of 1978 at Camp David. It was this agreement that largely led to Sadat’s assassination three years later.

24. Major tributary of the St. Lawrence : OTTAWA
The Ottawa River takes its name from the Odawa people, an Algonquin nation. The city of Ottawa changed its name to that of the river, from Bytown in 1855. The original townsite was called Bytown after Captain John By who completed the Rideau Canal that runs from Kingston on Lake Ontario to present-day Ottawa.

27. Three-term Big Apple mayor : ED KOCH
Ed Koch was a Democratic Representative in the US Congress from 1969-73, and then Mayor of New York City from 1978-89. From 1997 to 1999 Koch was a “judge” on the TV show “The People’s Court”. And in 2004, he collaborated with his sister Pat Koch, and wrote a children’s book called “Eddie, Harold’s Little Brother”, a tale about Ed’s own childhood experiences.

34. 8-Across’s mate : NALA
(8A. Famous feline of film : SIMBA)
In “The Lion King”, Nala is a lioness and the childhood friend of Simba. By the end of the story, Nala and Simba become wedded. “The Lion King” is inspired by William Shakespeare’s “Hamlet”, with Simba representing the title character, and Nala representing Hamlet’s love interest Ophelia.

37. Start of a counting rhyme : ONE POTATO, TWO POTATO
“One Potato” is a counting out game designed to select a person who is “it” in a kid’s game. The selection depends on the rhyme:

42. One drawn to kids’ entertainment? : TOON
The word “cartoon” was originally used for a “drawing on strong paper”, a durable drawing used as a model for a work of art. The term comes from the French word “carton” meaning “heavy paper, pasteboard”. Cartoons have been around a long time, with some of the most famous having being drawn by Leonardo da Vinci.

44. John Travolta and Samuel L. Jackson, in “Pulp Fiction” : HITMEN
I”m not a big fan of director Quentin Tarantino. His movies are too violent for me, and the size of his ego just turns me right off. Having said that, I think “Pulp Fiction” is a remarkable film. If you can look past the violence it’s really well written. And what a legacy it has. John Travolta’s career was on the rocks and he did the film for practically no money, and it turned out be a re-launch for him. Uma Thurman became a top celebrity overnight from her role. Even Bruce Willis got some good out of it, putting an end to a string of poorly received performances.

51. Ray of “GoodFellas” : LIOTTA
The actor Ray Liotta is best known for playing Shoeless Joe Jackson in the movie “Field of Dreams” and Henry Hill in “Goodfellas”.

59. “Raiders of the Lost Ark” destination : CAIRO
Cairo is the capital city of Egypt. It is the largest city on the continent of Africa and is nicknamed “The City of a Thousand Minarets” because of its impressive skyline replete with Islamic architecture. The name “Cairo” is a European corruption of the city’s original name in Arabic, “Al-Qahira”.

61. Chemistry Nobelist Hahn and others : OTTOS
Otto Hahn was a German chemist, someone who vigorously opposed the anti-Jewish policies of Nazi Germany. Hahn was one of a small group of scientists who discovered nuclear fission, pointing out that uranium atoms could be split into barium atoms when bombarded with neutrons. Hahn was awarded the Nobel Prize in Chemistry in 1944 for this discovery, although he probably got the credit for work that was actually shared with others.

62. Request for a high-five : UP TOP!
The celebratory gesture that we call a “high five” is said to have been invented by former baseball players Dusty Baker and Glenn Burke when they were both playing for the Los Angeles Dodgers in the later 1970s.

65. Protein source for a vegan : BEANS
A vegan is someone who stays away from animal products. A dietary vegan eats no animal foods, not even eggs and dairy which are usually eaten by vegetarians. Ethical vegans take things one step further by following a vegan diet and also avoiding animal products in other areas of their lives e.g. items made from leather or silk.

Down
2. Alternatives to cabs : PINOTS
The Pinot noir wine grape variety takes its name from the French for “pine” and “black”. The grapes grow in tight clusters shaped like pine cones, and are very dark in color. The Pinot noir grape is most closely associated with Burgundy wines in France, although in recent years the popularity (and price) of California Pinot noir wine has soared after it featured so prominently in the wonderful, wonderful 2004 movie “Sideways”. Grab a bottle of Pinot, and go rent the DVD…

3. Butterflies, so to speak : AGITA
Agita is another name for acid indigestion, and more generally can mean “agitation, anxiety”.

6. “Fiddlesticks!” : POOH!
We’ve been using “fiddlesticks” to mean “nonsense” since the early 17th century. Prior to that time, “fiddlestick” referred to the bow of a fiddle.

10. Honey brew : MEAD
Mead is a lovely drink that’s made from fermented honey and water.

21. Caviar : ROE
Caviar is the roe of a large fish that has been salted and seasoned, and especially the roe of a sturgeon. Beluga caviar comes from the beluga sturgeon, found primarily in the Caspian Sea. It is the most expensive type of caviar in the world. 8 ounces of US-farmed beluga caviar can be purchased through Amazon.com for just over $850, in case you’re feeling peckish …

25. Power bit : WATT
James Watt was a Scottish inventor, a man who figured prominently in the Industrial Revolution in Britain largely due to the improvements he made to the fledgling steam engine. The SI unit of power is called the watt, named in his honor.

28. Anthem opener : O SAY …
“O say can you see by the dawn’s early light” is the opening line of “The Star-Spangled Banner” by Francis Scott Key. The song was adopted as the US national anthem in 1931, although it had been used officially by the US Navy since 1889, played when raising the flag.

29. Smart-alecky : CUTE
Apparently the original “smart Alec” (sometimes “Aleck”) was Alec Hoag, a pimp, thief and confidence trickster who plied his trade in New York City in the 1840s.

52. Strength of a solution, in chemistry : TITER
Remember those titrations we did in the chemistry lab at school? They were to measure the concentration of solutions, also known as the solution’s “titer”.

53. Bygone fuel giant with a torch in its logo : AMOCO
“Amoco” is an abbreviation for “American Oil Company”, an oil company that merged with BP in 1998. Amoco had been the first oil company to introduce gasoline tanker trucks and drive-through filling stations. I wonder did they know what they were starting …?

55. Actress Moreno : RITA
The Puerto Rican singer, dancer and actress Rita Moreno is one of the few performers to have won an Oscar, Emmy, Grammy and Tony. Moreno got her big break, and won her Oscar, for playing Anita in the 1961 screen adaption of “West Side Story”.