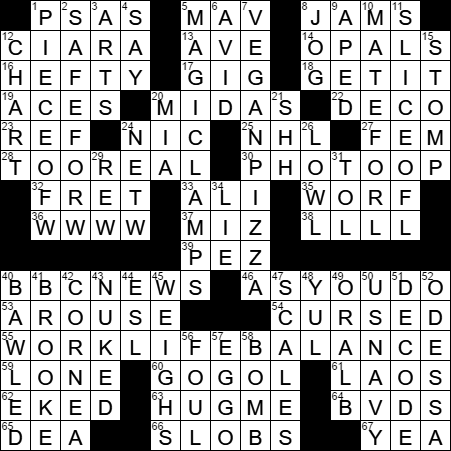 5. Dallas pro, informally : MAV
The Mavericks are the NBA franchise in Dallas, Texas. The team was founded in 1980, and the Mavericks name was chosen by fan votes. The choice of “Mavericks” was prompted by the fact that the actor James Garner was a part-owner of the team, and Garner of course played the title role in the “Maverick” television series.

8. Extemporizes, in a way : JAMS
The use of “jam”, to mean an improvised passage performed by a whole jazz band, dates back to the late twenties. This gave rise to “jam session”, a term used a few years later. The use of “jam” in this context probably stems from the meaning of “jam” as something sweet, something excellent.

13. Manhattan’s Park, e.g.: Abbr. : AVE
Park Avenue in New York City used to be known as Fourth Avenue, and for much of its length carried the tracks of the New York and Harlem Railroad. When the line was built, some of it was constructed by cutting through the length of the street and then forming underground tunnels by covering over the line with grates and greenery. This greenery formed a parkland between 34th and 40th Streets, and in 1860 the grassy section of Fourth Avenue was renamed Park Avenue, a name that was eventually used for the whole thoroughfare.

14. Shimmery stones : OPALS
An opal is often described as having a milky iridescence, known as “opalescence”.

17. Band’s booking : GIG
Musicians use “gig” to describe a job, a performance. The term originated in the early 1900s in the world of jazz.

24. Actor Cage, to friends : NIC
The actor Nicolas “Nic” Cage was born Nicolas Coppola. Cage is the nephew of director Francis Ford Coppola and actress Talia Shire, both of whom are his father’s siblings.

25. Org. that penalizes icing : NHL
I know nothing about hockey, but I just read that “icing” is an illegal play. It occurs when a player shoots the puck across two red lines or more (the red lines drawn across the ice), in effect taking a really long shot at goal. The idea behind the rule is to stop teams just sitting back and taking long shots at goal.

27. Like the yin side: Abbr. : FEM
The yin and the yang can be explained using many different metaphors. In one, as the sun shines on a mountain, the side in the shade is the yin and the side in the light is the yang. The yin is also regarded as the feminine side, and the yang the masculine. The yin can also be associated with the moon, while the yang is associated with the sun.

33. He said “If you even dream of beating me, you’d better wake up and apologize” : ALI
Muhammad Ali first used his famous catchphrase “float like a butterfly and sting like a bee” before his world title fight against Sonny Liston in 1964. Back then Ali still went by his birth name of Cassius Clay.

35. “Star Trek: T.N.G.” Klingon : WORF
In the television series “Star Trek: The Next Generation”, Mr. Worf is one of the main characters. He is a Klingon officer on the Enterprise, and is played by Michael Dorn. Worf is a unique character in the “Star Trek” franchise in that he also appeared regularly in another “Star Trek” show: “Star Trek: Deep Space Nine”.

37. “Les ___” : MIZ
The 1980 musical “Les Misérables” is an adaptation of the 1862 novel of the same name by Victor Hugo. The show opened in London in 1985, and is the longest running musical in the history of London’s West End. My wife and I saw “Les Miz” in the Queen’s Theatre in London quite a few years ago, but were only able to get tickets in the very back row. The theater seating is very steep, so the back row of the balcony is extremely high over the stage. One of the big events in the storyline is the building of a street barricade over which the rebels fight. At the height we were seated we could see the stagehands behind the barricade, sitting drinking Coke, even smoking cigarettes. On cue, the stagehands would get up and catch a dropped rifle, or an actor who had been shot. It was pretty comical. I didn’t really enjoy the show that much, to be honest. Some great songs, but the musical version of the storyline just didn’t seem to hang together for me.

39. Candy sold in stacked bricks : PEZ
PEZ is an Austrian brand name for a particular candy sold in a mechanical dispenser. Famously, PEZ dispensers have molded “heads”, and have become very collectible over the years. The list of heads includes historical figures like Betsy Ross and Paul Revere, characters from “Star Wars” and “Star Trek”, and even British royalty like the Duke and Duchess of Cambridge (“William and Kate”). The name PEZ comes from the first, middle and last letters of “Pfefferminz”, the German word for “peppermint”.

40. Airer of many public affairs programmes : BBC NEWS
The British Broadcasting Corporation (BBC) is also known as “the Beeb”, a name given to the network by the great Peter Sellers on the classic British radio comedy called “The Goon Show”. The BBC was founded in 1922, and was the world’s first national broadcasting organization.

60. “Dead Souls” author Nikolai : GOGOL
Nikolai Gogol was a Russian writer, born in Ukraine. Gogol wrote a lot of satirical pieces that attacked corrupt bureaucracy in Russia, which led to his being exiled. His most famous work is probably “Taras Bulba”, from 1836.

61. Neighbor of Myanmar : LAOS
The official name for the country of Laos is the Lao People’s Democratic Republic. In the Lao language, the country’s name is “Meuang Lao”. The French ruled Laos as part of French Indochina, having united three separate Lao kingdoms. As there was a plural of “Lao” entities united into one, the French added the “S” and so today we tend to use “Laos” instead of “Lao”.

63. Message on a candy heart : HUG ME
The forerunner to Sweethearts candy was introduced in 1866, with the famous sayings written on the candy tailored for use at weddings. One of the original expressions was, “Married in pink, he will take a drink”. The original candy was a lot bigger, to fit all those words! The smaller, heart-shaped candy hit the shelves in 1901. We’ve been able to buy Sweethearts with the words “Text me” since 2010.

64. Some briefs : BVDS
The men’s underwear known as BVDs are made by the Bradley, Voorhees & Day. The company was started in 1876 to make bustles for women, and is named for its founders.

Down
5. Things from which genii are summoned : MAGIC LAMPS
The “genie” in the bottle takes his or her name from “djinn”. “Djinns” were various spirits considered lesser than angels, with people exhibiting unsavory characteristics said to be possessed by djinn. When the book “The Thousand and One Nights” was translated into French, the word “djinn” was transformed into the existing word “génie”, because of the similarity in sound and the related spiritual meaning. This “génie” from the Arabian tale became confused with the Latin-derived “genius”, a guardian spirit thought to be assigned to each person at birth. Purely as a result of that mistranslation the word genie has come to mean the “djinn” that pops out of the bottle. A little hard to follow, I know, but still quite interesting …

7. Pie made with dairy-free cheese, maybe : VEGAN PIZZA
A vegan is someone who stays away from animal products. A dietary vegan eats no animal foods, not even eggs and dairy which are usually eaten by vegetarians. Ethical vegans take things one step further by following a vegan diet and also avoiding animal products in other areas of their lives e.g. items made from leather or silk.

20. Unaccounted for, for short : MIA
Missing in action (MIA)

42. You can see right through it : CORNEA
The cornea is the transparent part of the eye in the front, covering the iris and the pupil. Even though the cornea is not part of the lens it acts as a lens, and in fact does most of the work focusing light coming in through the eye. The cornea is in effect a fixed-focus lens passing on light to the variable-focus lens that is inside the eye.

43. Reheated, in a way : NUKED
One might rewarm a meal by nuking it, zapping it in the microwave.

44. Immigrant’s class: Abbr. : ESL
English as a Second Language (ESL) is sometimes referred to as English for Speakers of Other Languages (ESOL) and English as a Foreign Language (EFL).

48. Brynner of “The Magnificent Seven” : YUL
Yul Brynner was a Russian-born actor. Brynner was well known for his great performances, but also for his shaved head and his deep rich voice. He first adopted the “hairstyle” while playing the King of Siam in the stage version of “The King and I”, and he stuck with it.

49. Dental care brand : ORAL-B
The Oral-B toothbrush was introduced to the world in 1950, designed by a California periodontist. The first “model” was the Oral-B 60, a name given to reflect the 60 tufts in the brush. In 1969, the Oral-B was the first toothbrush to get to the moon as it was the toothbrush of choice for the crew of the Apollo 11 spacecraft.

50. Org. for Carter and Bush Sr. before they became presidents : US NAVY
President James Earl “Jimmy” Carter (JEC) is a graduate of the US Naval Academy (USNA). Carter served in the Navy on surface ships and submarines, and chose to pursue a career in the submarine service as he was interested in nuclear power and believed it had a great future in submarine design. As a result, he became an expert in nuclear propulsion. In 1952, the Navy sent the young Carter to the Chalk River Laboratories in Canada to lead the US effort to shutdown the reactor after an accident and partial meltdown of a reactor core. He and his team had to be lowered into the leaking reactor core for mechanical disassembly, staying there for only seconds at a time to minimise exposure to radiation. Decades later as US President, it was this experience that influenced Carter’s decision not to complete the development of the neutron bomb.

52. Texas oil city : ODESSA
The city of Odessa (also “Odesa”) in Ukraine was founded relatively recently, in 1794 by Catherine the Great. The city was originally meant to be called Odessos after an ancient Greek city believed to have been located nearby. Catherine liked the way the locals pronounced the name as “Odessa” and so went with the less Greek-sounding name.

57. Frozen food brand with French Toaster Sticks : EGGO
Eggo is the brand name of a line of frozen waffles made by Kellogg’s. When they were introduced in the 1930s, the name “Eggo” was chosen to promote the “egginess” of the batter. “Eggo” replaced the original name chosen, which was “Froffles”, created by melding “frozen” and “waffles”.