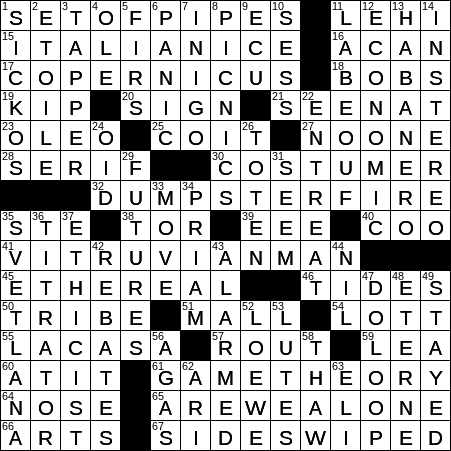 Today’s Wiki-est, Amazonian Googlies
Across
15. Gelato alternative : ITALIAN ICE
A sno-cone (also “snow cone”) is just a paper cone filled with crushed ice and topped with flavored water. Italian ice is similar, but different. Whereas the flavoring is added on top of the ice to make a sno-cone, Italian ice is made with water that is flavored before it is frozen.

17. Pioneer in heliocentric theory : COPERNICUS
Nicolaus Copernicus was an astronomer active during the Renaissance. Copernicus was the first person to propose that the Earth and the planets revolved around the Sun.

The “at symbol” (@) originated in the commercial word, as shorthand for “each at, per” and similar phrases. I suppose we see the symbol most commonly these days as part of all email addresses.

25. San Francisco’s ___ Tower : COIT
Coit Tower is a renowned memorial in San Francisco that sits atop Telegraph Hill. The full name of the structure is the Lillian Coit Memorial Tower, recognizing a generous bequest to the city by wealthy socialite Lillie Hitchcock Coit. There is an urban myth in these parts that the tower was designed to resemble the nozzle of a fire hose, as Lillie used to like chasing fires and hanging out with firefighters.

28. End of a letter : SERIF
Serifs are details on the ends of characters in some typefaces. Typefaces without serifs are known as sans-serif, using the French word “sans” meaning “without” and “serif” from the Dutch “schreef” meaning “line”. Some people say that serif fonts are easier to read on paper, whereas sans-serif fonts work better on a computer screen. I’m not so sure though …

35. Jeanne d’Arc, e.g.: Abbr. : STE
Joan of Arc (also “Jeanne d’Arc”, her birth name) led the French Army successfully into battle a number of times during the Hundred Years War with England. When she was eventually captured, Joan was tried in Rouen, the seat of the occupying English government in France at that time. There she was burned at the stake having been found guilty of heresy. In fact, after the fire died down, the executioner raked the coals to display the charred body, proving Joan had died, and then burned the corpse again, twice, so that relics could not be collected. The remaining ashes were then cast into the Seine River. Joan of Arc was canonized some 600 years later, in 1920, and is now one of the patron saints of France.

38. Raptors’ home: Abbr. : TOR
The Raptors are the NBA basketball team based in Toronto, Ontario.

41. Leonardo da Vinci drawing featuring superimposed body positions : VITRUVIAN MAN
You know that drawing by Leonardo da Vinci, of a man with his arms outstretched, confined in a circle? Well, that drawing is known as the Vitruvian Man. Da Vinci was trying to illustrate the thesis by Roman architect Vitruvius, that pleasing architectural proportions were related to proportions found in the human boy.

54. Senate majority leader who succeeded Dole : LOTT
Trent Lott is a political figure who first went to Washington to work as an administrative assistant to Representative William M. Colmer, from Mississippi. After four years working for Colmer, Lott ran for the House seat that Colmer was to leave vacant on his retirement. Colmer endorsed Lott in that election, even though Colmer was a Democrat and Lott ran as a Republican. Lott won the race very handily, launching a 35-year career representing his home state of Mississippi in both the House and the Senate. Lott eventually ran into trouble for remarks he made that were interpreted as being racially motivated, and ended up resigning in 2007.

55. The house of Versace? : LA CASA
Gianni Versace was an Italian fashion designer. His death was perhaps as famous as his life. He was murdered in 1997 outside his mansion in Miami Beach by Andrew Cunanan. It is not certain that Cunanan knew who his victim was, as this was the last in a spree of five murders committed by him over a four month period. A few days after killing Versace, Cunanan used the same gun to commit suicide.

59. Bucolic expanse : LEA
The word “bucolic”, meaning rustic or rural, comes to us from the Greek word “boukolos” meaning “cowherd”.

61. John Nash’s field of mathematics : GAME THEORY
The wonderful 2001 movie “A Beautiful Mind” is of course based on a true story, but it is also a screenplay adapted from a very successful book of the same name written by Sylvia Nasar. Both book and film tell the life story of John Nash (played by Russell Crowe on the big screen). Nash was a mathematician and Nobel Laureate who struggled with paranoid schizophrenia.

Down
2. Cannes star : ETOILE
Cannes is a city on the French Riviera that is noted as host of the Cannes Film Festival. The decision to host an annual film festival was adopted by the city just before WWII. However, the festival had to wait for the end of the war for its launch in 1946.

3. CNN newsman Jake : TAPPER
Jake Tapper is a journalist working for CNN as Chief Washington Correspondent. Tapper is also a cartoonist. He wrote a comic strip called “Capitol Hell” that appeared in the Washington, DC paper “Roll Call” from 1994 to 2003.

4. Copa Mundial cry : OLE!
In Spanish, supporters might be heard yelling “ole!” at the “Copa Mundial” (World Cup) of soccer.

8. Spreads out in a park? : PICNICS
Our term “picnic” comes from the French word that now has the same meaning, namely “pique-nique”. The original “pique-nique” was a fashionable pot-luck affair, and not necessarily held outdoors.

9. Euro forerunner : ECU
The European Currency Unit (ECU) was an interim unit of account used in the European Community for just over ten years before the Euro was launched in 1999. The ECU existed alongside the legacy European currencies as the Community worked to stabilize exchange rates in the run-up to the Euro’s launch.

11. Shia who’s not a Muslim : LABEOUF
Shia LaBeouf is an actor who started out in the Disney television series “Even Stevens”. Adult audiences might be more familiar with his leading role in the 2003 film “Holes”.

13. Cayenne’s hotter cousin : HABANERO
The habanero chili has a very intense flavor. Interestingly, the correct spelling of the chili’s name is “habanero”, although in English we try to be clever and add a tilde making it “habañero”, which isn’t right at all …

34. Hector’s father : PRIAM
Priam was king of Troy during the Trojan War. Reputedly, Priam was father to fifty sons and many daughters with his many wives. His eldest son and heir to the throne was Hector. Paris was another of Priam’s sons, the man who caused the Trojan War by eloping with Helen, Queen of Sparta.

As described in Homer’s “Iliad”, Hector was a Trojan prince and a great fighter. Hector was slain during the Trojan War, as the Greeks lay siege to Troy. If we are to believe the 2004 film “Troy”, Hector actually died at the hands of Achilles, while fighting a duel. Homer’s “Iliad” is less specific about the circumstances of Hector’s death.

36. Certain chemistry lab apparatus : TITRATOR
Titration is a laboratory technique used to determine the concentration of a particular solution. We probably all did titrations in school, using a burette.

37. Immanuel Kant, for one : ETHICIST
Immanuel Kant was an 18th-century, German philosopher. Kant published “Perpetual Peace” in 1795, laying out what he believed were conditions for ending all wars and creating a lasting peace. The good news for us is that one of these conditions was to have a world full of constitutional republics, so it seems we are on the right track here in the US!

52. “Brigadoon” composer : LOEWE
Frederick Loewe was a composer best known for his collaborations with the lyricist Alan Jay Lerner, the most famous of which were “My Fair Lady”, “Gigi” and “Camelot”.

56. Ottoman chiefs : AGAS
“Aga” (also “agha”) is a title that was used by both civil and military officials in the Ottoman Empire.

62. Cardinals’ home: Abbr. : ARI
The Arizona Cardinals were founded in 1898 as the Chicago Cardinals. That makes the Cardinals the oldest, continuously-run professional football team in the whole country.