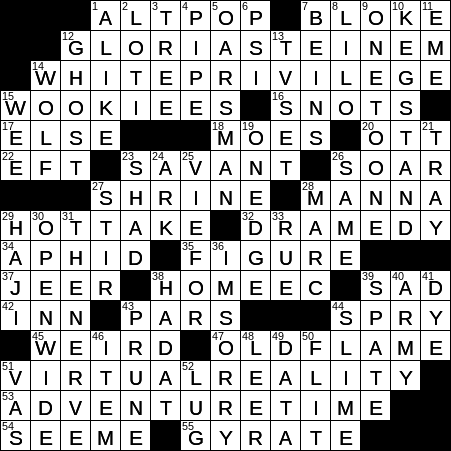 Today’s Wiki-est, Amazonian Googlies
Across
7. Fellow : BLOKE
“Bloke” is British slang for a fellow. The etymology of “bloke” seems to have been lost in the mists of time.

18. Longtime TV tavern : MOE’S
Moe Szyslak is the surly bartender and owner of Moe’s Tavern in “The Simpsons” animated TV show. I don’t really care for “The Simpsons”, but Hank Azaria who supplies the voice for the Moe character … him I like …

20. To whom Durocher was referring when he said “Nice guys finish last” : OTT
Baseball player and manager Leo Durocher was noted for being outspoken, and was given the nickname “Leo the Lip”. In 1946, while he was manager of the Brooklyn Dodgers, Durocher expressed the opinion that teams like his successful Dodgers would always do better than teams replete with personable individuals (naming Mel Ott in particular). He used his most memorable phrase to encapsulate the sentiment … “nice guys finish last”.

22. Little wriggler : EFT
Newts wouldn’t be my favorite animals. They are found all over the world living on land or in water depending on the species, but always associated with water even if it is only for breeding. Newts metamorphose through three distinct developmental stages during their lives. They start off as larvae in water, fertilized eggs that often cling to aquatic plants. The eggs hatch into tadpoles, the first developmental form of the newt. After living some months as tadpoles swimming around in the water, they undergo another metamorphosis, sprouting legs and replacing their external gills with lungs. At this juvenile stage they are known as efts, and leave the water to live on land. A more gradual transition takes place then, as the eft takes on the lizard-like appearance of the adult newt.

23. Wise one : SAVANT
A “savant” is a learned person. The term “savant” can also be short for “idiot savant”, the outdated name for someone with a mental disability but who has above-normal capabilities in perhaps calculation or musical expression.

28. It’s described as fine and flakelike in Exodus : MANNA
According to the Book of Exodus, manna was a food eaten by the Israelites as they traveled out of Egypt. The manna “fell” to Earth during the night, six days a week, and was gathered in the morning before it had time to melt.

34. Insect that’s born pregnant : APHID
Aphids are called “greenfly” back in the British Isles where I come from. The most effective way to control aphids in my experience is to make sure there are plenty of ladybugs in the garden (called ladybirds in Ireland!).

54. Repeated lyric in the Who’s “Tommy” : SEE ME
“Tommy” is the fourth album recorded by the British band called the Who. “Tommy” was the original rock opera and was adapted for both the stage and screen, with both adaptations becoming huge successes. The title character has an uncanny ability to play pinball, giving rise to the hit song “Pinball Wizard”.

Down
3. Word with family or Christmas : TREE
The custom of decorating trees at Christmas seems to have originated in Renaissance Germany. Those first trees were placed in guildhalls and were decorated with sweets and candy for the apprentices and children. After the Protestant Reformation, the Christmas tree became an alternative in Protestant homes for the Roman Catholic Christmas cribs. The Christmas tree tradition was imported into Britain by the royal family because of its German heritage. That tradition spread from Britain into North America.

5. Sculler : OARSMAN
A scull is a boat used for competitive rowing. The main hull of the boat is often referred to as a shell. Crew members who row the boat can be referred to as “oars”. And, a scull is also an oar mounted on the stern of a small boat. It’s all very confusing …

7. Some Vietnam War protests : BE-INS
Just before 1967’s “Summer of Love” in the Haight-Ashbury district of San Francisco, a Human Be-In was held in the city’s Golden Gate Park. The Be-In is described as a “happening”, a gathering triggered by a new state law banning the use of LSD. The term “Human Be-In” is a play on “humanist sit-in”.

8. Disney’s “___ & Stitch” : LILO
“Lilo & Stitch” was released by Disney in 2002. Compared to other Disney feature-length cartoons, “Lilo & Stitch” was relatively cheaply produced, using the voices of lesser-known actors. One interesting change had to take place in the storyline during production, when Lilo was meant to fly a Jumbo Jet through downtown Honolulu in one sequence. This was replaced with a sequence using a spaceship instead, as the producers were sensitive to public sentiment after the September 11 attacks.

12. Popular word game : GHOST
In the word game “Ghost”, players take turns in adding letters to a word fragment. The intent is not to complete a word, even though the fragment itself must be the start of some real word. I have never played it, I must admit …

13. Soap box? : TV SET
The original soap operas were radio dramas back in the fifties. Given the structure of society back then, the daytime broadcasts were aimed at women working in the home as housewives. For some reason the sponsors of those radio shows, and the television shows that followed, were soap manufacturers like Procter & Gamble, Colgate-Palmolive and Lever Brothers. And that’s how the “soap” opera got its name …

15. Like Tom Thumb : WEE
The story “Tom Thumb” was originally published in 1621, making it the first fairy tale ever printed in English. The title character is a boy who is no bigger than his father’s thumb, hence his name.

23. Kind of roe : SHAD
The shad is also known as the river herring. The eggs (roe) of the female shad are prized as a delicacy in the Eastern US.

24. What had a double standard in the Bible? : ARK
Genesis 6:19-20 states that Noah was instructed to take two animals of every kind into the ark. Later, in Genesis 7:2-3 Noah was instructed to take on board “every clean animal by sevens … male and female, to keep offspring alive on the face of all the earth”. Apparently “extras” (7 rather than 2) were needed for ritual sacrifice.

27. Ruckus : STIR
The word “ruckus” is used to mean a commotion, and has been around since the late 1800s. “Ruckus” is possibly a melding of the words “ruction” and “rumpus”.

28. Fashion designer Ecko : MARC
Marc Ecko is a fashion designer from New Jersey. Marc was born Marc Milecofsky. In college, he became a fan of graffiti and used the name “Ecko” to tag his drawings.

29. Traveler to a certain 27-Across : HAJI
(27A. Where bows may be made : SHRINE)
A Haji (also “Hajji”) is the term used for someone who has made a pilgrimage to Mecca, and it is sometimes also used as a form of address for such a person. The journey itself goes by the name “haj” or “hajj”.

40. Red ___ : ARMY
The association of the color red with communism dates back to the French Revolution. A red flag was chosen as a symbol by the revolutionaries, with the color representing the blood of workers who had died in the fight against capitalism.

52. Palooka : LUG
The word “palooka” was originally used to describe a mediocre prizefighter and dates back to the 1920s. Then there was a comic strip called “Joe Palooka”, and I guess the meanings got melded somehow. Today we use “palooka” as a slang term for an oaf or a clumsy person.