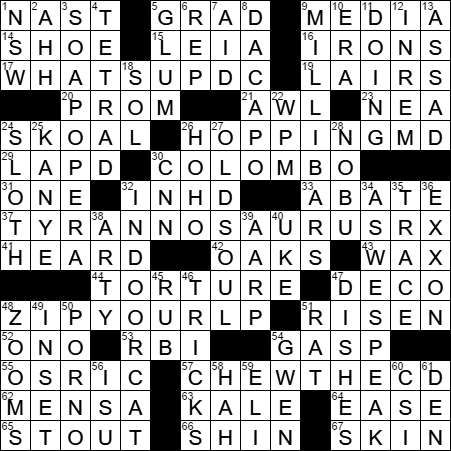 Volgograd is a Russian city on the Volga River. Known as Stalingrad from 1925 until 1961, the city is famous for the Battle of Stalingrad against the German Army in WWII. The Soviets emerged victorious after just over five months of fierce and brutal fighting in what is believed to be the bloodiest battle in the history of warfare.

14. Wedge or pump : SHOE
A pump is a woman’s shoe that doesn’t have a strap. Such shoes are probably called “pumps” because of the sound they make while walking in them.

15. Princess of Alderaan : LEIA
The full name of the character played by Carrie Fisher in the “Star Wars” series of films is Princess Leia Organa of Alderaan, and later Leia Organa Solo. Leia is the twin sister of Luke Skywalker, and the daughter of Anakin Skywalker (aka Darth Vader) and Padmé Amidala. Leia is raised by her adoptive parents Bail and Breha Organa. She eventually marries Han Solo.

20. Event presided over by a king and queen : PROM
A prom is a formal dance held upon graduation from high school (we call them “formals” over in Ireland). The term “prom” is short for “promenade”, the name given to a type of dance or ball.

23. Museum-funding org. : NEA
The National Endowment for the Arts (NEA) is an agency funded by the federal government that offers support and financing for artistic projects. The NEA was created by an Act of Congress in 1965. Between 1965 and 2008, the NEA awarded over $4 billion to the arts, with Congress authorizing around $170 million annually through the eighties and much of the nineties. That funding was cut to less than $100 million in the late nineties due to pressure from conservatives concerned about the use of funds, but it is now back over the $150 million mark. I wonder how long that will last though …

29. Sgt. Friday’s org. : LAPD
The Los Angeles Police Department (LAPD) is the third largest local law enforcement agency in the country, after New York PD and Chicago PD. Among other things, LAPD is famous for creating the first Special Weapons and Tactics (SWAT) team in the US, in 1965.

30. Sri Lanka’s capital : COLOMBO
Colombo is the largest city in Sri Lanka. It is also the commercial capital of the island nation, whereas the administrative capital is Kotte (or more formally “Sri Jayawardenepura Kotte). Kotte is in fact a suburb of Colombo.

37. Prescription for a prehistoric carnivore? : TYRANNOSAURUS RX (from “Tyrannosaurus rex”)
There seems to some uncertainty about the origin of the symbol “Rx” that’s used for a medical prescription. One explanation is that it comes from the astrological sign for Jupiter, a symbol put on prescriptions in days of old to invoke Jupiter’s blessing to help a patient recover.

The Tyrannosaurus rex (usually written T. rex) was a spectacular looking dinosaur. “Tyrannosaurus” comes from the Greek words “tyrannos” (tyrant) and “sauros” (lizard), and the “rex” is of course Latin for “king”. They were big boys, measuring 42 feet long and 13 feet tall at the hips, and weighing 7.5 tons.

44. The Geneva Conventions prohibit it : TORTURE
The First Geneva Convention is one of four treaties aimed at protecting the victims of armed conflict. The first of these treaties was signed in 1864 by the major European powers at the urging of relief activist Henri Dunant. Dunant also established the Red Cross in 1863, an organization that is specifically called out in the First Geneva Convention as an agency that is allowed to provide protection and relief for wounded and sick soldiers. The first treaty was significantly updated and expanded in 1906, 1929 and 1949.

48. “Keep that record in its case!”? : ZIP YOUR LP (from “zip your lip!”)
The first vinyl records designed to play at 33⅓ rpm were introduced by RCA Victor in 1931, but were discontinued due to quality problems. The first long play (LP) 33⅓ rpm disc was introduced by Columbia Records many years later in 1948, with RCA Victor following up with a 45 rpm “single” the following year, in 1949.

52. Sean ___ Lennon : ONO
Sean Lennon is the only child of John Lennon and Yoko Ono. Sean’s godfather is Elton John. Sean is a musician and composer, and has a band called the Ghost of a Saber Tooth Tiger.

55. “Hamlet” courtier : OSRIC
In William Shakespeare’s play “Hamlet”, Osric is the courtier that Claudius dispatches to invite Hamlet to participate in a duel.

57. Mistake a shiny disc for a cookie? : CHEW THE CD (from “chew the cud”)
Ruminants are animals that “chew the cud”. Ruminants eat vegetable matter but cannot extract any nutritional value from cellulose without the help of microbes in the gut. Ruminants collect roughage in the first part of the alimentary canal, allowing microbes to work on it. The partially digested material (the cud) is regurgitated into the mouth so that the ruminant can chew the food more completely exposing more surface area for microbes to do their work. We also use the verb “to ruminate” in a figurative sense, to mean “to muse, ponder, chew over”.

62. Mental bloc? : MENSA
If you ever learned Latin, “mensa” was probably taught to you in lesson one as it’s the word commonly used as an example of a first declension noun. Mensa means “table”. The Mensa organization, for folks with high IQs, was set up in Oxford, England back in 1946. To become a member, you have to have an IQ that is in the top 2% of the population.

65. Pub selection : STOUT
The term “stout” was first used for a type of beer in the 1600s when was used to describe a “strong, stout” brew, and not necessarily a dark beer as it is today.

3. Endless melodrama : SOAP OPERA
The original soap operas were radio dramas back in the fifties. Given the structure of society back then, the daytime broadcasts were aimed at women working in the home as housewives. For some reason the sponsors of those radio shows, and the television shows that followed, were soap manufacturers like Procter & Gamble, Colgate-Palmolive and Lever Brothers. And that’s how the “soap” opera got its name …

5. Down in the dumps : GLUM
Both “glum” and “gloom” have the same root, each coming from the Middle English verb “gloumen” meaning “to become dark”.

8. From the beginning, in music : DA CAPO
The musical term “da capo” is an instruction to repeat from the beginning. The term translates literally from Italian as “from the head”.

12. Against a thing, legally : IN REM
“In rem” translates from Latin as “in a thing”. In a lawsuit, an action is described as “in rem” if it is directed against some property. This would be the case if someone disputes ownership of a piece of land, for example. An action “in personam” on the other hand, is directed against a specific individual.

13. Syrian strongman : ASSAD
Dr. Bashar al-Assad is the current President of the Syrian Arab Republic and the son of the former President Hafez al-Assad whom he replaced in 2001. President Assad is a medical doctor, speaks fluent English and conversational French. Assad was studying ophthalmology in London when he met his wife, who is an Englishwoman.

25. West with Roc-A-Fella records : KANYE
Kanye West is a rap singer who was born in Atlanta and raised in Chicago. He also spent some time in Nanjing, China as a child, where his mother was teaching as part of an exchange program. West is married to reality star Kim Kardashian.

28. Celebrity chef Matsuhisa : NOBU
Nobu Matsuhisa is celebrity chef from Japan. Nobu was invited to open a Japanese restaurant in Lima, Peru in 1973, and while in South America developed his own Peruvian-Japanese fusion cuisine. He moved to the US a few years later, and now there are “Nobu” and “Matsuhisa” restaurants all over the world.

30. Anderson Cooper’s TV home : CNN
Anderson Cooper is a respected news personality on CNN and on various shows around the dial. My favorite appearances of his, although he would call them trivial I am sure, was as host of a great reality game show called “The Mole” that aired in 2001.

32. Animal that might be found curled up on a windowsill : INDOOR CAT
“Sill plate” or simply “sill” is an architectural term for a bottom horizontal member to which vertical members are attached. A windowsill is a specific sill plate that is found at the bottom of a window opening.

39. Advocate for seniors : AARP
AARP is now the official name for the interest group that used to be called the American Association of Retired Persons. The name change reflects the current focus of the group on all Americans aged 50 or over, as opposed to just people who have retired.

40. Maui music maker, informally : UKE
The ukulele (uke) originated in the 1800s and mimicked a small guitar brought to the Hawaiian Islands by Portuguese immigrants.

Maui is the second largest of the Hawaiian islands. Maui is sometimes called the “Valley Isle” as it is composed of two volcanoes to the northwest and southeast of the island, each with numerous beautiful valleys carved into them.

46. Bridge units : TRICKS
That would be bridge, the card game.

47. Gossips : DISHES
“To dish the dirt” is talk about someone or something without regard to veracity. The phrase comes from “dish” (in the sense of dishing out food) and “dirt” (in the sense of negative information).

54. Rocker Stefani : GWEN
Gwen Stefani is the lead singer for the rock band No Doubt. She joined the band in 1986, focused on a solo career from 2004-2008, but is now back singing and working with No Doubt.

56. The Cyclones of the N.C.A.A., for short : ISU
Iowa State University of Science and Technology (ISU) is located in Ames, Iowa. Among many other notable events, ISU created the country’s first school of veterinary medicine, in 1879. The sports teams of ISU are known as the Cyclones.

60. Sin City forensic drama : CSI
The “CSI” franchise of TV shows has been tremendously successful, but has finally wound down. “CSI: Miami” (the “worst” of the franchise, I think) was cancelled in 2012 after ten seasons. “CSI: NY” (the “best” of the franchise) was cancelled in 2013 after nine seasons. The original “CSI: Crime Scene Investigation”, set in Las Vegas, hung in there until 2015 when it ended with a two-hour TV movie. The youngest show in the series was “CSI: Cyber”. It lasted for two season before being canceled in 2016.