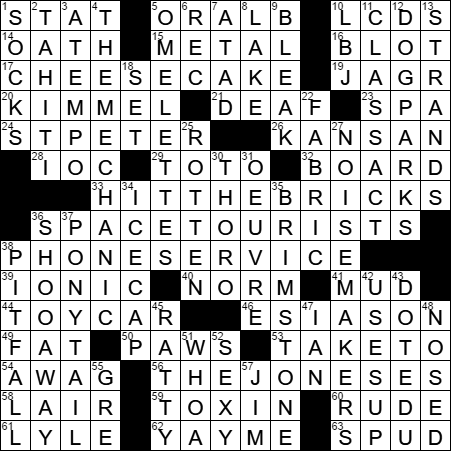 Today’s Wiki-est, Amazonian Googlies
Across
1. Walks or runs : STAT
That would be baseball.

5. 3D White brand : ORAL-B
The Oral-B toothbrush was introduced to the world in 1950, designed by a California periodontist. The first “model” was the Oral-B 60, a name given to reflect the 60 tufts in the brush. In 1969, the Oral-B was the first toothbrush to get to the moon as it was the toothbrush of choice for the crew of the Apollo 11 spacecraft.

10. Some TVs : LCDS
Liquid Crystal Displays (LCDs) are the screens that are found in most laptops today, and in flat panel computer screens and some televisions. LCD monitors basically replaced Cathode Ray Tube (CRT) screens, the old television technology.

19. Hockey legend Jaromir : JAGR
Jaromír Jágr is an NHL hockey player from the Czech Republic. When Jágr made his debut in the NHL in 1990 at age 18, he was the youngest player in the league.

23. Place to work up a sweat : SPA
The word “spa” migrated into English from Belgium, as Spa is the name of a municipality in the east of the country that is famous for its healing hot springs. The name “Spa” comes from the Walloon word “espa” meaning “spring, fountain”.

24. Metaphorical rock of Matthew 16:18 : ST PETER
The Catholic Church regards Saint Peter as the first to hold the papal office, as he was the first bishop of Rome. Peter took office in 30 CE, and probably died in 64 CE, making him the longest-reigning pope.

26. Auntie Em, e.g. : KANSAN
In “The Wonderful Wizard of Oz”, Dorothy lives with her Auntie Em and Uncle Henry.

28. Org. with biennial bids : IOC
The International Olympic Committee (IOC) was founded in 1894, and has its headquarters in Lausanne, Switzerland.

29. Band that shares its name with a film canine : TOTO
Toto is an American rock band dating back to 1977. As well as their famous “Rosanna”, they also sang another good tune called “Africa”.

33. Skedaddle : HIT THE BRICKS
“Skedaddle ” is a slang term meaning “run away” that dates back to the Civil War.

39. ___ compound : IONIC
Chemical compounds consist of atoms that are attracted to each other in “chemical bonds”. Chemical bonds are primarily of two types: bonds resulting from electrostatic attraction between atoms with opposite charges (ionic and metallic bonds), and bonds formed through the sharing of electrons (covalent bonds).

41. Joe : MUD
It seems that no one really knows why we refer to coffee as “joe”, but we’ve been doing so since early in WWII.

44. Place for a decal, maybe : TOY CAR
A decal is a decorative sticker, short for “decalcomania”. The term is derived from the French “décalquer”, the practice of tracing a pattern from paper onto glass or perhaps porcelain.

46. 1988 N.F.L. M.V.P. from the Cincinnati Bengals : ESIASON
Boomer Esiason is a retired NFL quarterback, now working as a sports commentator. Esiason has had the nickname “Boomer” since before he was born. His mother called him “Boomer” because he was constantly kicking away in her womb.

49. Epithet for Louis VI, with “the” : FAT
Louis le Gros (“Louis the Fat” aka “Louis VI”) ruled France until his death in 1137. Apparently Louis died of dysentery brought on by a gluttonous lifestyle that had made him grossly overweight.

59. Benzene or lead : TOXIN
Benzene is a remarkable chemical compound, from a molecular standpoint anyway. It is made up of six carbon atoms arranged in a ring, with one hydrogen atom attached to each carbon. Benzene is a significant component of gasoline, and is also very carcinogenic.

“Plumbum” is the Latin for lead, explaining why the symbol of the element in the Periodic Table is “Pb”. It also explains why the original lead weight on the end of a line used to check vertical was called a “plumb line”. And, as pipes were originally made of lead, it also explains why we would call in a “plumber” if one of them was leaking.

63. Chips, initially : SPUD
The word “spud” is used as a slang term for a potato and was first recorded in the mid-1800s, in New Zealand would you believe?

Down
2. Stop for James Cook when circumnavigating the globe : TAHITI
Captain Cook landed in Tahiti in 1769, although he wasn’t the first European to do so. But Cook’s visit to Tahiti was the most significant in that it heralded a whole spate of European visitors, who brought with them prostitution, venereal disease and alcohol. Paradoxically, they also brought Christianity. Included among the subsequent visitors was the famous HMS Bounty under the charge of Captain Bligh.

3. Getting back to speed, musically : A TEMPO
“A tempo” is a Italian for “in time”. The phrase is used on a musical score to instruct a performer to return to the main tempo of the piece, perhaps after slowing down or speeding up.

4. 2011 Jason Statham action flick : THE MECHANIC
Jason Statham is an actor from England best known for playing tough characters on screen. I liked him in the remake of “The Italian Job” from 2003.

13. DNA pair : STRANDS
Francis Crick and James Watson discovered that DNA had a double-helix, chain-like structure, and published their results in Cambridge in 1953. To this day the discovery is mired in controversy, as some crucial results collected by fellow researcher Rosalind Franklin were used without her permission or even knowledge.

22. Chintz, e.g. : FABRIC
Chintz is a calico fabric that is very florid, and which originated in India. Indian chintz was in such great demand in Europe in the 17th-century, and so much was sold, that both England and France banned its import. This contributed to the term “chintz” being applied derogatively to a fabric, and from there to anything cheap or gaudy.

31. Works of a lifetime : OEUVRE
The sum of an artist’s work in his or her lifetime is known as his or her “oeuvre”.

43. School closing? : DOT EDU
The .edu domain was one of the six original generic top-level domains specified. The complete original list is:

55. Inits. on a master’s application : GRE
Passing the Graduate Record Examination (GRE) is usually a requirement for entry into graduate school here in the US.

57. “Star Trek” captain, to friends : JIM
According to the storyline in “Star Trek”, Captain James Tiberius Kirk was born in Riverside, Iowa. The town of Riverside displays a plaque, noting Riverside as the “future birthplace of James T. Kirk.”