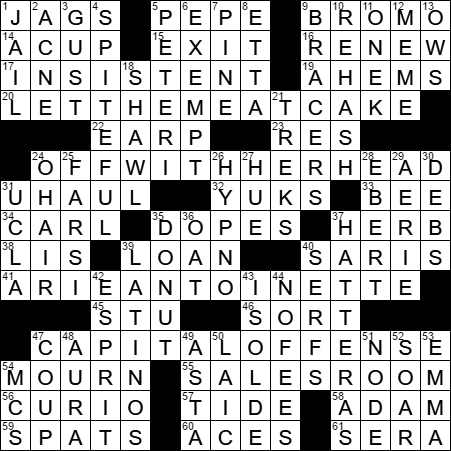 CROSSWORD CONSTRUCTOR: Ed Sessa
THEME: -arie Antoinette
Today’s crossword centers on Marie Antoinette, although it’s OFF WITH HER HEAD. The queen was deemed to have committed a CAPITAL OFFENSE, so the capital M in “MARIE” has been lopped off:

Today’s Wiki-est, Amazonian Googlies
Across
1. Bouts, as of crying : JAGS
The word “jag” is used to describe periods of unrestrained activity, particularly involving alcohol, and has been in use since the 1800s.

5. ___ Le Pew (cartoon skunk) : PEPE
Pepé Le Pew is a very likeable cartoon character from the Looney Tunes and Merrie Melodies series. Pepé is a French skunk, first introduced way back in 1945. He is always thinking of “l’amour” and chases the lady skunks, or a black cat with a white stripe accidentally painted down her back.

9. Fizzy headache remedy, informally : BROMO
Bromo-Seltzer is an antacid that was first produced back in 1888, and is still available today, although it’s hard to find. The Bromo-Seltzer headquarters were in downtown Baltimore in a building that features a magnificent clock tower that was patterned on the Palazzo Vecchio in Florence. The tower is a famous landmark in the city. The four clock faces display the letters B-R-O-M-O S-E-L-T-Z-E-R beside the much smaller Roman numerals that tell the time.

20. Words attributed to 41-Across : LET THEM EAT CAKE
There is no evidence that Marie Antoinette ever uttered the words “Let them eat cake”. The phrase was attributed to “a great princess” though, by the philosopher Jean-Jacques Rousseau. Rousseau wrote in his autobiography:

22. Wyatt of the Old West : EARP
Wyatt Earp is famous as one of the participants in the gunfight at the O.K. Corral. Earp was a city policeman in Wichita, Kansas and also in Dodge City, Kansas. Earp was also deputy sheriff in Tombstone, Arizona where the O.K. Corral gunfight took place. Years later, Earp joined the Alaska Gold Rush and with a partner built and operated the Dexter Saloon in Nome.

31. Moving day rental : U-HAUL
The U-Haul company was started by married couple Leonard Shoen and Anna Mary Carty in Ridgefield, Washington in 1945. The Shoens used $5,000 of seed money to build trailers in their garage, and then cleverly recruited gas station owners as franchisees with whom they would split the rental revenue. There are now about 15,000 U-Haul dealers across the country.

34. Cosmologist Sagan : CARL
Carl Sagan was a brilliant astrophysicist and a great communicator. Sagan was famous for presenting obscure concepts about the cosmos in such a way that we mere mortals could appreciate. He also wrote the novel “Contact” which was adapted into a fascinating 1997 film of the same name starring Jodie Foster.

40. Dresses in Delhi : SARIS
New Delhi is the capital city of India. New Delhi resides within the National Capital Territory of Delhi (otherwise known as the metropolis of Delhi). New Delhi and Delhi, therefore, are two different things.

41. Famous queen, depicted literally : -ARIE ANTOINETTE
Marie Antoinette was the wife of Louis XVI, the last king of France. Marie Antoinette was the fifteenth of sixteen children born to the Empress Maria Theresa of Austria. The marriage to Louis, her second cousin once removed, was arranged while the two were very young. The prospective bride was “handed over” to the French at a border crossing in 1770 and two weeks later she was married to the future king. Marie Antoinette was just 14 years of age at the time, and Louis only a year her senior. Both Louis and Marie Antoinette were doomed to lose their heads courtesy of the guillotine during the French Revolution.

45. Early Beatle ___ Sutcliffe : STU
Stu Sutcliffe was one of the original four members of The Silver Beatles (as The Beatles were known in their early days), along with John Lennon, Paul McCartney and George Harrison. Sutcliffe apparently came up with name “Beatles” along with John Lennon, as a homage to their hero Buddy Holly who was backed by the “Crickets”. By all reports, Sutcliffe wasn’t a very talented musician and was more interested in painting. He went with the group to Hamburg, more than once, but he eventually left the Beatles and went back to art school, actually studying for a while at the Hamburg College of Art. In 1962 in Hamburg, Sutcliffe collapsed with blinding headaches. He died in the ambulance on the way to hospital, his death attributed to cerebral paralysis.

57. Competitor of Wisk : TIDE
Tide is a laundry detergent that has been made by Procter & Gamble since 1946. Back then, Tide was marketed as “America’s Washday Favorite”.

Down
5. Czar called “the Great” : PETER I
Peter the Great was perhaps the most successful of the Romanov tsars, and was famous for modernizing Russia and expanding the country’s sphere of influence, creating the Russian Empire. He ruled from 1682 until his death in 1725.

8. Grammy-winning James : ETTA
Etta James was best known for her beautiful rendition of the song “At Last”. Sadly, as she disclosed in her autobiography, James lived a life that was ravaged by drug addiction leading to numerous legal and health problems. Ms. James passed away in January 2012 having suffered from leukemia.

12. Bit of viral web content : MEME
A “meme” (short for “mineme”) is a cultural practice or idea that is passed on verbally or by repetition from one person to another. The term lends itself very well to the online world where links, emails, files etc. are so easily propagated.

24. Atheist Madalyn Murray ___ : O’HAIR
Madalyn Murray O’Hair was the president of the organization American Atheists from 1963 to 1986. Murray was the plaintiff in the lawsuit Murray v. Curlett that in 1963 led to the Supreme Court ruling that ended Bible-reading in American schools. Murray came to a sorry end, as she was kidnapped in 1995 and brutally murdered along with her son and granddaughter. The crime was committed by a co-worker at American Atheists.

25. Persian tongue : FARSI
“Farsi” is one of the local names for Persian, an Iranian language.

28. Fellow film critic of Siskel : EBERT
Roger Ebert co-hosted a succession of film review television programs for over 23 years, most famously with Gene Siskel until Siskel passed away in 1999. Siskel and Ebert famously gave their thumbs up or thumbs down to the movies they reviewed.

30. Belles of the ball : DEBS
“Deb” is short for “debutante”, which translates from French as “female beginner”.

31. The Bruins of the Pac-12 : UCLA
The UCLA Bruins mascots are Joe and Josephine Bruin, characters that have evolved over the years. There used to be “mean” Bruin mascots but they weren’t very popular with the fans, so now there are only “happy” Bruin mascots at the games.

35. Krispy Kreme product : DONUT
The Krispy Kreme chain of doughnut stores was founded in 1937 in Winston-Salem, North Carolina. The company introduced the Whole Wheat Glazed doughnut in 2007, great for folks looking to eat a healthy diet, I am sure …

36. Grain used in making Alpha-Bits : OAT
Alpha-Bits is a Post breakfast cereal that was introduced in 1958, and taken off the shelves in 2006. The cereal was relaunched in 2008 with “0% Sugar!” tagline, but I guess that didn’t sell too well. The original Alpha-Bits formulation was reintroduced in 2008. Sugar, sugar, sugar …

40. Feudal workers : SERFS
A serf was a member of the lowest feudal class, someone attached to land owned by a lord. “Serf” comes from the Latin “servus”, meaning “slave”.

43. Tristan’s beloved : ISOLDE
According to Arthurian legend, Iseult (also “Isolde”) was the adulterous lover of Sir Tristan, one of the Knights of the Round Table. Iseult was an Irish Princess who fell in love with Tristan who had been sent to win Iseult’s hand in marriage for King Mark of Cornwall. The tale was used as the basis for Richard Wagner’s celebrated opera “Tristan und Isolde”.

47. Brilliant move : COUP
A coup d’état (often just “coup”) is the sudden overthrow of a government, and comes from the French for “stroke of state”. The Swiss-German word “putsch” is sometimes used instead of “coup”, with “Putsch” translating literally as “sudden blow”.

49. “The Thin Man” canine : ASTA
Asta is the wonderful little dog in the superb “The Thin Man” series of films starring William Powell and Myrna Loy (as Nick and Nora Charles). In the original story by Dashiell Hammett, Asta was a female Schnauzer, but on screen Asta was played by a wire-haired fox terrier called “Skippy”. Skippy was also the dog in “Bringing up Baby” with Cary Grant and Katharine Hepburn, the one who kept stealing the dinosaur bone. Skippy retired in 1939, so Asta was played by other dogs in the remainder of “The Thin Man” films.

50. Of the flock : LAIC
Anything described as laic (or “laical, lay”) is related to the laity, those members of the church who are not clergy. The term “laic” ultimately comes from the Greek “laikos” meaning “of the people”.

53. Jane Austen heroine : EMMA
Jane Austen’s novel “Emma” is the tale of Emma Woodhouse and the wonderful George Knightley. At the end of the story, Emma marries Knightley and her young friend Harriet marries Robert Martin, who had been trying to get Harriet’s attention practically from page one of the novel!

54. Roast hosts, for short : MCS
The term “emcee” comes from “MC”, an initialism standing for Master or Mistress of Ceremonies.