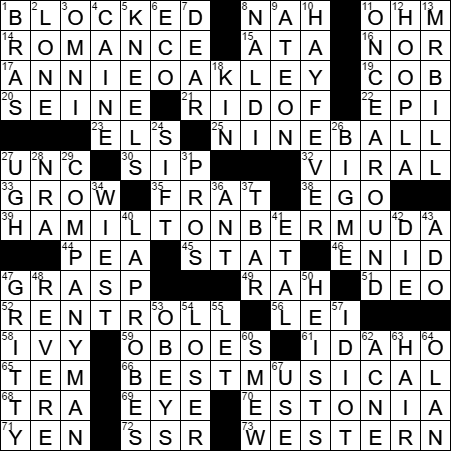 CROSSWORD CONSTRUCTOR: David J. Kahn
THEME: Best Musicals
Each of today’s themed answers starts with the name of a stage musical that won the Tony Award for Best Musical:

Today’s Wiki-est, Amazonian Googlies
Across
11. Law man : OHM
The unit of electrical resistance is the ohm (with the symbol omega) named after German physicist Georg Simon Ohm. Ohm was the guy who established experimentally that the amount of current flowing through a circuit is directly proportional to the voltage applied, (V=IR) a relationship that every schoolkid knows as Ohm’s Law.

17. Markswoman dubbed “Little Sure Shot” [1977] : ANNIE OAKLEY (giving “Annie”)
Many regard Annie Oakley as the first American female superstar, given her celebrity as a sharpshooter in Buffalo Bill’s Wild West Show. She toured with the show all over Europe, and performed her act for the likes of Queen Victoria of England and Kaiser Wilhelm II of Germany. Supposedly, using a .22 caliber rifle from 90 feet away, Oakley could split a playing card edge-on, and shoot five or six holes in the card before it hit the ground!

The Broadway musical “Annie” is produced in more than one version. There is an “Annie Jr.” that has been edited down to a shortened version more suitable for young performers and audiences. An even shorter version that lasts only 30 minutes is called “Annie KIDS”, and is meant for performers still in elementary school.

19. Male swan : COB
An adult male swan is called a “cob”, and an adult female is a “pen”. Young swans are called “swanlings” or “cygnets”.

20. Site of two French banks : SEINE
The famous “Left Bank” (“La Rive Gauche”) of the River Seine in Paris is the river’s southern bank. The area south of the river was traditionally quite bohemian and was home to artists, students and intellectuals.

The “Right Bank” (“La Rive Droite”) of the river Seine in Paris was historically more affluent than the colorful Left Bank. The most famous street on the Right Bank is the elegant “Champs-Élysées”.

22. Prefix with center : EPI-
The “epicenter” is that point on the surface of the earth which is directly above the focus of an earthquake.

25. Variety of pool [1982] : NINE-BALL (giving “Nine”)
Eight-ball and nine-ball are arguably the most popular variants of pool played in North America. In eight-ball, one player sinks the striped balls, and the other the solid balls. The first to sink all his or her balls, and then the black 8-ball, without fouling wins the game. In nine-ball, each player must hit the lowest numbered ball on the table first with the cue ball. The first player to sink the 9-ball wins. Sinking the nine ball can happen when first hitting the lowest bowl on the table, or possibly when balls numbered 1-8 have been sunk.

27. 2017 N.C.A.A. basketball champs : UNC
The University of North Carolina (UNC) at Chapel Hill started enrolling students way back in 1795, making it the oldest public university in the country (the first to enrol students).

32. Rapidly spreading over the internet : VIRAL
A computer virus has characteristics very similar to a virus found in nature. It is a small computer program that can copy itself and can infect another host (computer).

39. Capital city with only about 1,000 residents [2016] : HAMILTON, BERMUDA (giving “Hamilton”)
Hamilton is the capital of the British Overseas Territory of Bermuda located in the North Atlantic Ocean. The city was founded in 1790 and was named for Henry Hamilton, who was Governor of Bermuda at that time. As recently as 2016, Hamilton has topped the list of the most expensive cities in the world in which to live.

45. “Right away!” : STAT!
The exact etymology of “stat”, a term meaning “immediately” in the medical profession, seems to have been lost in the mists of time. It probably comes from the Latin “statim” meaning “to a standstill, immediately”. A blog reader has helpfully suggested that the term may also come from the world of laboratory analysis, where the acronym STAT stands for “short turn-around time”.

46. Geraint’s wife, in Arthurian legend : ENID
Enid is a Welsh name, from “einit” an old Welsh word meaning “purity”. Enid was the wife of Geraint, one of King Arthur’s knights. Enid is described as “the personification of spotless purity”.

51. “Gloria in Excelsis ___” (hymn) : DEO
“Gloria in excelsis Deo” is a Latin hymn, the title of which translates as “Glory to God in the highest”.

52. Landlord’s register [1996] : RENT ROLL (giving “Rent”)
The musical “Rent” by Jonathan Larson is based on the Puccini opera “La bohème”. “Rent” tells the story of struggling artists and musicians living in the Lower East Side of New York, and is set against the backdrop of the AIDS epidemic. We saw “Rent” on Broadway quite a few years ago and we were very disappointed …

56. Ring on a string : LEI
“Lei” is the Hawaiian word for “garland, wreath”, although in more general terms a “lei” is any series of objects strung together as an adornment for the body.

58. Columbia, for one : IVY
Columbia University is an Ivy League school in New York City. Columbia’s athletic teams are called the Lions, thought to be a reference to the lion on the English coat of arms. Prior to the American Revolution, Columbia was called King’s College as it was chartered by King George II in 1754.

61. Boise’s home : IDAHO
Boise, Idaho is the largest metropolitan area in the state by far. There are a number of stories pertaining to the etymology of the name “Boise”. One is that French trappers named the tree-lined river that ran through the area “la rivière boisée”, meaning “the wooded river”.

70. Country north of Latvia : ESTONIA
Estonia is one of the former Soviet Socialist Republics (SSRs) and is located in Northern Europe on the Baltic Sea, due south of Finland. Estonia has been overrun and ruled by various empires over the centuries. The country did enjoy a few years of freedom at the beginning of the 20th century after a war of independence against the Russian Empire. However, Estonia was occupied again during WWII, first by the Russians and then by the Germans, and then reoccupied by the Soviets in 1944. Estonia has flourished as an independent country again since the collapse of the USSR in 1991.

71. Hankering : YEN
The word “yen”, meaning “urge”, has been around in English since the very early 1900s. It comes from the earlier word “yin” imported from Chinese, which was used in English to describe an intense craving for opium!

73. TV’s “Maverick” or “Gunsmoke” : WESTERN
“Maverick” is a TV series set in the Wild West and starring James Garner as Bret Maverick. Midway through the first series, Bret was given a brother called Bart, who was played by Jack Kelly. Once the brother’s character was introduced, Bart and Bret alternated as the lead character in each weekly episode. Both Mavericks were expert poker players who got themselves in and out of all sorts of trouble. After the third season, James Garner left the show and was replaced by actor Roger Moore who played a Maverick cousin called Beau. Still later, actor Robert Colbert was introduced as a third brother called Brent Maverick.

“Gunsmoke” is a Western drama series that originally aired on television from 1955 to 1975, with James Arness starring as Marshall Matt Dillon. The TV show was adapted from a radio show of the same name that ran from 1952 to 1961, with William Conrad playing Marshall Dillon.

Down
1. They may be strapless or padded : BRAS
The word “brassière” is French in origin, but it isn’t the word the French use for a “bra”. In France, what we call a bra is known as a “soutien-gorge”, translating to “held under the neck”. The word “brassière” is indeed used in France but there it describes a baby’s undershirt, a lifebelt or a harness. “Brassière” comes from the Old French word for an “arm protector” in a military uniform (“bras” is the French for “arm”). Later “brassière” came to mean “breastplate” and from there the word was used for a type of woman’s corset. The word jumped into English around 1900.

11. 400 meters, for an Olympic track [2012] : ONCE AROUND (giving “Once”)
“Once” is a stage musical adapted from the 2007 Irish musical film of the same name directed by John Carney. The stage version premiered Off-Broadway in 2011. I guess in typical Irish fashion, the set features a bar that’s used during the action of the play, In most productions, the bar on stage is used to serve drinks for audience members before the show and during the intermission.

12. Commotion : HOOPLA
The word “hoopla” means “boisterous excitement”. The term probably comes from “houp-là”, something the French say instead of “upsy-daisy”. Then again, “upsy-daisy” probably isn’t something said very often here in the US …

13. Clay character in old “S.N.L.” sketches : MR BILL
Mr. Bill is a clay figure who appeared in shorts broadcast on “Saturday Night Live”. Mr. Bill first featured in a Super-8 reel shot by Walter Williams and submitted to the show. Williams went on to become a full-time writer for the show.

26. 1996 Foo Fighters hit : BIG ME
Foo Fighters are described as an alternative rock band, one formed in 1994 by the drummer from Nirvana, Dave Grohl. The term “Foo fighters” originally applied to unidentified flying objects reported by allied airmen during WWII. Spooky …

29. Superloyal employee [1971] : COMPANY MAN (giving “Company”)
“Company” is a comedy stage musical by Stephen Sondheim that premiered on Broadway in 1970. The show was originally titled “Threes”, a reference to the three girlfriends that the main character juggles.

“Hannah and Her Sisters” is a 1986 comedy-drama film that was written and directed by Woody Allen. Hannah is played by Mia Farrow, and Hannah’s two sisters are played by Barbara Hershey and Dianne Wiest.

37. Means of avoiding an uphill climb : T-BAR
A T-bar is a type of ski lift on which the skiers are pulled up the hill in pairs, with each pair standing (not sitting!) either side of T-shaped metal bar. The bar is placed behind the thighs, pulling along the skiers as they remain standing on their skis (hopefully!). There’s also a J-bar, a similar device, but with each J-shaped bar used by one skier at a time.

48. Noted colonial silversmith : REVERE
Paul Revere is famous for having alerted the Colonial militia when the British military arrived in the build up to the battles of Lexington and Concord. Revere earned his living as a silversmith. After the war, Revere returned to his trade and diversified into other metalwork. Revere was the first American to develop a process to roll copper into sheets so that the metal could be used to sheathe the hulls of naval vessels.

60. Eurasian duck : SMEW
The smew is a beautiful-looking species of duck found right across northern Europe and Asia. The smew requires trees to complete its breeding cycle as it nests in tree holes, such as old woodpecker nests.

64. Pearl Buck heroine : O-LAN
Pearl S. Buck’s novel “The Good Earth” won a Pulitzer in 1932, and helped Buck win the Nobel Prize for literature a few years later. The novel tells of life in a Chinese village and follows the fortunes of Wang Lung and his wife O-Lan. Although “The Good Earth” has been around for decades, it hit the bestseller list again in 2004 when it was a pick for Oprah’s Book Club.