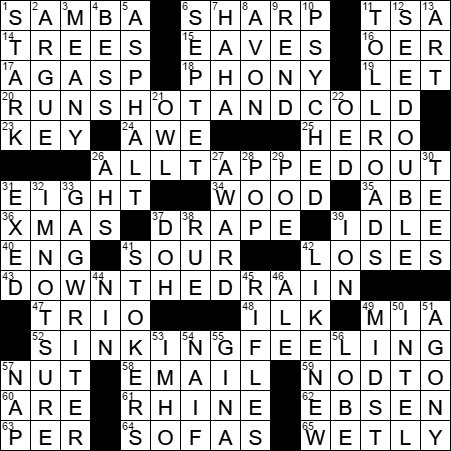 CROSSWORD CONSTRUCTOR: Michael Hawkins
THEME: … As a Plumber
Each of today’s themed answers are “punnily” related to plumbing:

Today’s Wiki-est, Amazonian Googlies
Across
1. Rio dance : SAMBA
The samba is a Brazilian dance that is very much symbolic of the festival known as Carnival. Like so much culture around the world, the samba has its roots in Africa, as the dance is derived from dances performed by former slaves who migrated into urban Rio de Janeiro in the late 1800s. The exact roots of the name “samba” seem to have been lost in the mists of time. However, my favorite explanation is that it comes from an African Kikongo word “semba” which means “a blow struck with the belly button”. We don’t seem to have a need for such a word in English …

11. Body-scanning grp. : TSA
The Transportation Security Administration (TSA) is the agency that employs the good folks that check passengers and baggage at airports.

20. Vacillates, as a plumber? : RUNS HOT AND COLD
“Plumbum” is the Latin for lead, explaining why the symbol of the element in the Periodic Table is “Pb”. It also explains why the original lead weight on the end of a line used to check vertical was called a “plumb line”. And, as pipes were originally made of lead, it also explains why we would call in a “plumber” if one of them was leaking.

25. Recipient of a ticker-tape parade, maybe : HERO
Stock price information used to be transmitted over telegraph lines by “stock tickers” that produced the famous “ticker tape”, a paper tape with stock symbols and prices printed on it. The “ticker” got its name from the noise it created when it was printing. Even though ticker tape is no longer used, the concept lives on in the scrolling electronic tickers that stream across the bottom of a television screen when there’s a financial program airing.

35. Homer’s father : ABE
In the animated TV show called “The Simpsons”, Grampa Abe Simpson is voiced by Dan Castellaneta, the same actor who provides the voice for Homer.

41. Whiskey drink : SOUR
A whiskey sour is made from whiskey, lemon juice and sugar, and is usually garnished with an orange slice and a maraschino cherry.

47. Athos, Porthos and Aramis, e.g. : TRIO
Alexandre Dumas’ “Three Musketeers” are Athos, Porthos and Aramis, although the hero of the novel is their young protégé is D’Artagnan. A musketeer was an infantry soldier who was equipped with a musket. Funnily enough, the three “musketeers” really don’t use their muskets, and are better known for prowess with their swords.

49. Broadway’s “Mamma ___!” : MIA
The hit musical “Mamma Mia!” was written to showcase the songs of ABBA. I’m a big fan of ABBA’s music, so I’ve seen this show a couple of times and just love it. “Mamma Mia!” is such a big hit on the stage that on any given day there are at least seven performances going on somewhere in the world. There is a really interesting film version of the show that was released in 2008. I think the female lead Meryl Streep is wonderful in the movie, but the male leads … not so much! By the way, one can tell the difference between “Mamma Mia” the ABBA song and “Mamma Mia!” the musical, by noting the difference in the punctuation in the titles.

61. Major river starting in SE Switzerland : RHINE
The river running through Europe that we know in English as the Rhine, is called “Rhein” in German, “Rhin” in French and “Rijn” in Dutch.

62. Actor Buddy of “The Beverly Hillbillies” : EBSEN
The actor Buddy Ebsen was best known for playing Jed Clampett in television’s “The Beverly Hillbillies”. Ebsen had been cast in the role of the Tin Man in the 1939 movie “The Wizard of Oz”, but he developed an allergy to the aluminium dust that was used in the makeup. He ended up in hospital and had to walk away from the part. Ebsen blamed “The Wizard of Oz” on persistent problems that he had with his lungs in subsequent years. But Ebsen lived 16 years longers that any of the other major cast members of the film, so maybe he got the last laugh!

Down
1. “Game of Thrones” family name : STARK
Ned Stark is the protagonist in George R. R. Martin’s fantasy novel “A Game of Thrones”, although his character doesn’t exactly come out on top by the end of the story. Stark is played by actor Sean Bean in the HBO television adaptation of the novel.

4. Mrs. Truman : BESS
Harry and Bess Truman met when they were very young children, at Sunday school. They were friends right through high school and became engaged in 1918 just before Harry went off to France during WWI, marrying the next year. Bess Truman never really took to the Washington scene when she became First Lady and stayed out of the limelight as much as she could. Perhaps that contributed to her longevity. Mrs. Truman lived to the age of 97, making her the longest living First Lady in US history.

5. It’s used to pave the way : ASPHALT
The asphalt surface on roads (or basketball courts) is more properly called asphaltic concrete, because asphalt itself is just a sticky black liquid that comes from crude petroleum. Asphalt is used as a binder with aggregate to form asphaltic concrete.

8. Makeup maker : AVON
In 1886, a young man called David McConnell was selling books door-to-door. To enhance his sales numbers he was giving out free perfume to the ladies of the houses that he visited. Seeing as his perfume was more popular than his books, he founded the California Perfume Company in New York City and started manufacturing and selling across the country. The company name was changed to Avon in 1939, and the famous “Avon Calling” marketing campaign was launched in 1954.

10. Gung-ho : PSYCHED
“Kung ho” is a Chinese expression meaning “work together, cooperate”. The anglicized version “gung ho” was adopted by a Major Evans Carlson as an expression of combined spirit for his 2nd Marine Raider Battalion during WWII. From there the term spread throughout the Marine Corps and back to America where it persists to this day.

21. Letter carrier at Hogwarts : OWL
Hedwig is the owl belonging to Harry Potter in the J. K. Rowling series of fantasy novels. Hedwig is a female owl, although she is played in the movies by male snowy owls. Male snowy owls are completely white, whereas females have dark patches on their plumage.

27. Espy or Emmy : AWARD
The ESPY Awards are a creation of the ESPN sports television network. One difference with similarly named awards in the entertainment industry is that ESPY winners are chosen solely based on viewer votes.

37. Exclamation from Homer : D’OH!
“The Simpsons” is one of the most successful programs produced by the Fox Broadcasting Company. Homer Simpson’s catchphrase is “D’oh!”, which became such a famous exclamation that it has been included in the Oxford English Dictionary (OED) since 2001. “D’oh!” can be translated as “I should have thought of that!”

44. 20th-century author famous for her journals : NIN
Anaïs Nin was a French author, famous for her journals that she wrote for over sixty years from the age of 11 right up to her death. Nin also wrote highly regarded erotica and cited D. H. Lawrence as someone from whom she drew inspiration. Nin was married to banker and artist Hugh Parker Guiler in 1923. Decades later in 1955, Nin married former actor Rupert Pole, even though she was still married to Guiler. Nin and Pole had their marriage annulled in 1966, but just for legal reasons, and they continued to live together as husband and wife until Nin passed away in 1977.

46. Sierra Nevada, for one : ALE
The Sierra Nevada Brewing Company is powered almost exclusively by solar energy, and even has a charging station for electric vehicles at its brewery. The company also uses the cooking oil from its restaurant as biodiesel for its delivery trucks. Discarded yeast is used to make ethanol fuel, and spent grain is used as food for livestock. For its efforts to preserve the environment, Sierra Nevada won the EPA’s “Green Business of the Year” award for 2010.

55. Actress Lollobrigida : GINA
Gina Lollobrigida is an Italian actress, and also a photojournalist and sculptor. After her career in movies started to slow down in the seventies, she turned to photojournalism. She has photographed many of the greats, including Paul Newman, Salvador Dali, Audrey Hepburn and even the German national soccer team. In fact, she was also able to arrange an exclusive interview with Fidel Castro, much to the chagrin of the world’s professional journalists.